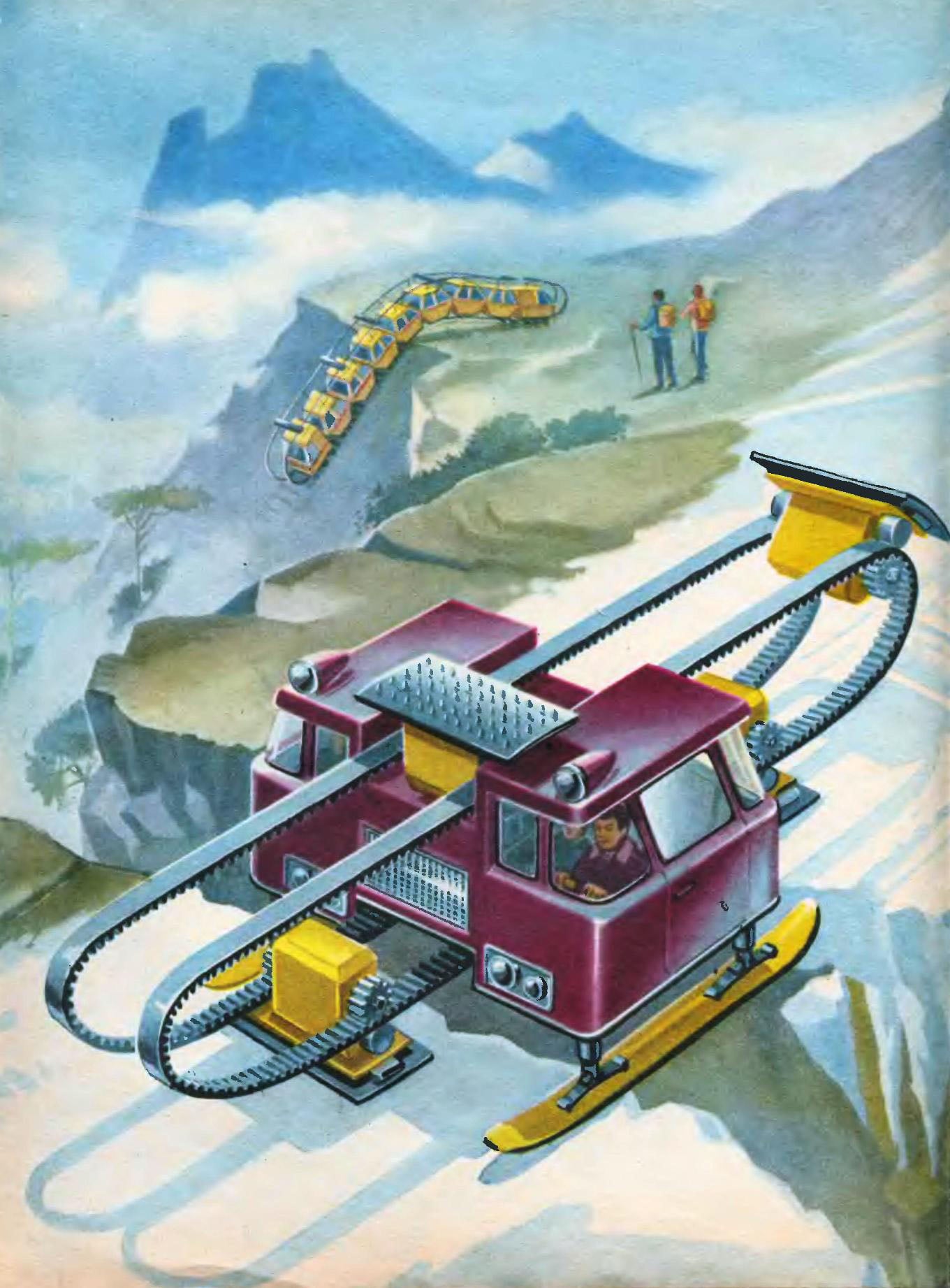 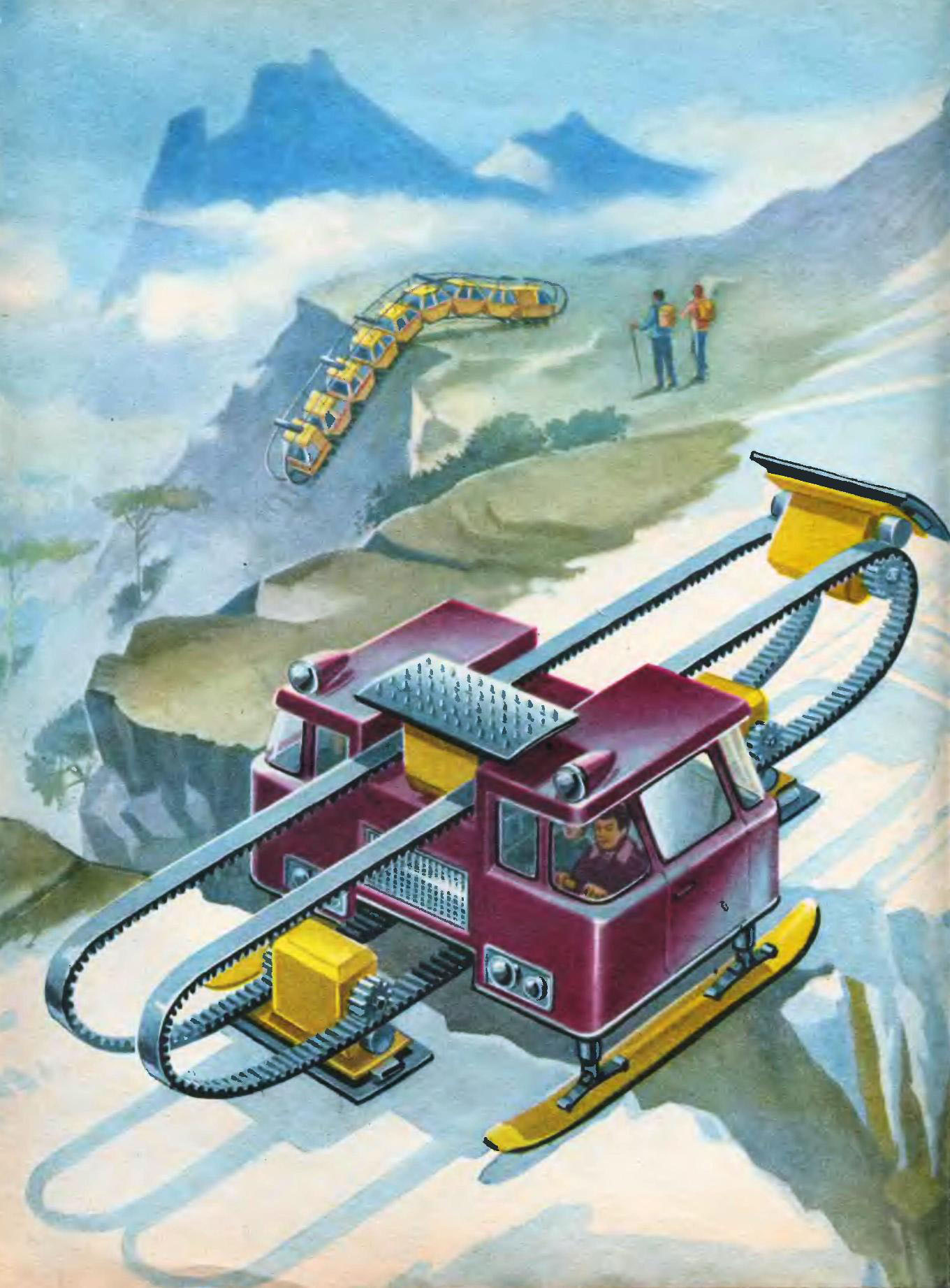 Every time lugging bulky geophysical equipment on mountain glaciers, I wanted a jeep. Finally it was received. And here we tracked the car-amphibians against snow-capped mountains… revved the motor and the machine, lost in the snow at the cabin, moved slowly. Ahead was the forehead of the glacier. Pretty flat for Hiking standards: degree fifteen. But the driver knew that the snow he did not take, and took the car sideways. In the middle of the forehead jumped out the caterpillar.
A sledgehammer, a pile of metal, drowned in snow, frost and wind… About an hour, we pulled the tracks and then turned back. It was possible to improve on the windy moraine of a glacier sticking out from under the snow stones. But the Rover took a detour: stones. They are so easily broken trucks and the fingers of the caterpillars.
And I realized that the most common, the most omnipotent of the existing all-terrain — tracked — not a dream but a past stage.
You need something fundamentally new: the traffic that would be going on the mounds of ice with a height of one meter and loose snow, water, rocks and steep grades. This device must be long enough to overcome the cracks gaping in the ice, or snow closed the “bridges”; quite light and portable, so it can be send to the baggage car and throw it into the mountains a little helicopter…
…On the stones caterpillar breaks.
So, we need to break it in advance! On individual pieces, trucks, — let him crawl alone. How? Put on every, say, motors. With their help, the truck will move along a closed guide and, as the winch will drag the car.
Thus was born the idea of the author’s certificate No. 386797, issued March 28, 1973 on “the Propulsion of a vehicle”, which can be called by trakovi, because its essence and basis of the self — propelled truck. The wording of the subject invention is somewhat complex: “the Propulsion of a vehicle, containing a closed guide rails associated with the vehicle body movably mounted on the guide supporting elements, wherein to automatically adapt to the different profile and different carrying capacity of the soil and to move them along the guide supporting elements are Autonomous and have individual engines.” 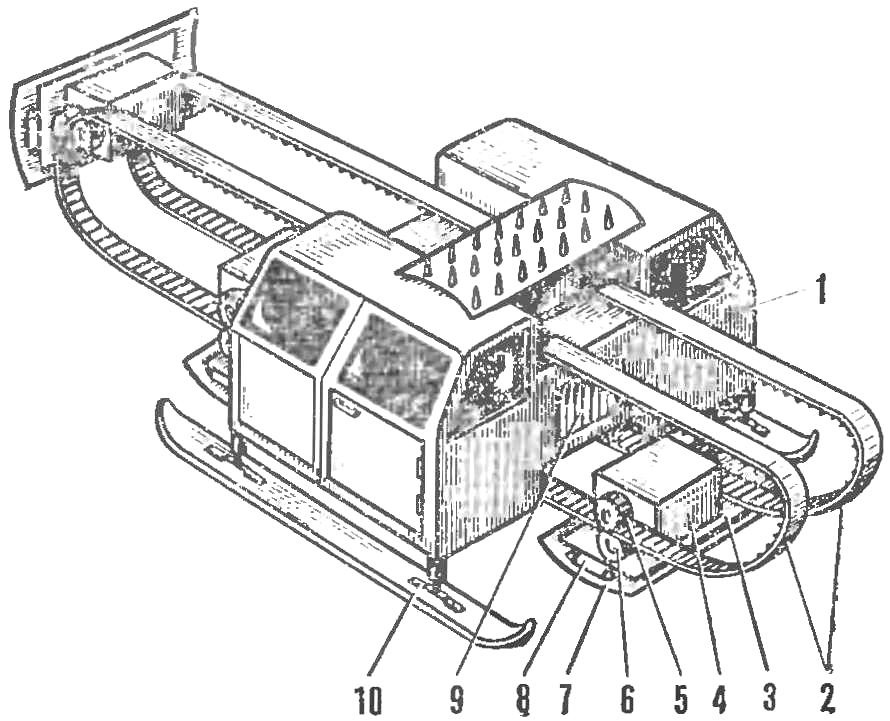 Fig. 1. Rover-climber:
1 — cabin-lab; 2 — toothed guide rails, rigidly secured to the housing; 3 — track mover; 4 — gear motor; 5 — the leading gear roller; 6 — pinch rollers, 7 — support Shoe; 8 — spring; 9 — diesel-electric units (or batteries); 10 — lateral support of the ski.
You do not believe that this idea is the principle of being the universal mover, able to climb mountains, Wade through swamps, jump, crawl and swim? Then (don’t look at the pictures while not to constrain your imagination) try to replace the engine of any machine, the legs of any living creature. Every time replacement we can do it!
I had no idea about this kind of versatility: from idea to author’s certificate passed 5 years. Within two years, pondered ways of technical realization. Was cor,.tion: where, besides my mountain glaciers, and who else needs a supercar, curvetted moving because the body crawling small self-propelled mechanisms, replacing simple glands — Shoe tracks? And not one (although you can do one, but then it will be intermittent or jerky movement), but many. However, it’s harder if you keep in mind the truck as a reference element. But the car in General easier. Because it consists of many identical, interchangeable, Autonomous mechanisms and not of a complex of rigidly linked to each other, complex and diverse: powertrain, wheels, suspension engine.
This machine in General will be more reliable. For the same reason: self-contained supporting members are working independently, the failure of one of them almost imperceptible — the reliability of the ensemble of parallel elements increases with increasing number of elements and tends to one, even if the reliability of one of them is close to zero And tracks conventional tracks are connected in series, and the gap at least in one place leads to the exit of the sling chain. The reliability of this propulsion is inversely proportional: it tends to zero when increasing the number of links, even if the reliability of one unit is close to one. So the caterpillar chain can not be too long, even in theory.
So, the new car in General will become more reliable and easier. And simpler to manufacture. It is enough to work out how one should design one cart — self-propelled element — and then you can mount them in any amount and on any device interaction with a surface or environment; plates, air bags, grips, pontoons, blades — in the case of self-propelled machines of any size. This, of course, easier, than each time to develop and build a new dedicated machine.

Fig. 2. Reference element:
1 — body of the vehicle 2 and the elastic guide; 3 — absorber of the suspension rail; 4 — bus conductors; 5 — sliding current collectors; 6 — support Shoe; 7 — motor; 8 is a leading rink; 9 — pressure rollers with spring; 10 — the gear housing-rotor; 11 — the block of remote control truck-motor; 12 — time drilling pins that hold the track to the vertical track 13 — side rollers.
Truck engine can be put on any object, even the most bulky; would need only the guides of the necessary length and the necessary number of self-propelled trucks — and move these objects far better! What are the objects? Platforms with drilling rigs through swamps and tundra; bundles of pipes for oil and gas pipelines, farms, bridges, houses, finally, the ships in the winter — not breaking the ice, but on ice! This is a very important advantage of the new propulsion is promising in modern masshtaba. the development of Siberia and the North of the huge win.
There is another, more important: the automatic adaption to various load-bearing surface and to the soil profile. In the simplest case, this property is reflected in the fact that depending on the nature of the soil and the distribution of irregularities under the lower, working part of the guide Autonomous supporting elements can automatically be placed at different distances from each other, and in the support and movement of the vehicle can be used a variety of them.
Is implemented, this property is extremely simple, due to the dependence of the rate of movement of the support along the guide elements from the load on their engines: the more load the less speed, n Vice versa. For example, when driving on an uneven surface the supporting elements will quickly slip trenches, pits and rests in mounds, ledges, rocks, propelling the car forward.
Where is the property truck mover is adjusting to the irregularities expressed in this simplest form, could affect the decisive? DIN, where these irregularities more. Scope of application these machines are enormous, and above all — mountains.
This is practically the last “conquer” another man the surface of the Earth. There is still no technology that can go anywhere on the mountain road, through stone fields, snow, ice, rocks, lakes, mountain rivers. Climber with a hook, a hammer and a rope — that’s the only “vehicle” in these mountains. And profession a mountaineer, now becoming a mass working groups of experts created by the construction of Nurek, Sayan, the Inguri dam. At Toktogul hydropower unit employs more than 500 people. This they first need mountain ATV-climber.
New mover allows you to create such a machine. For this purpose it has all the features.
Its supporting members choose their own area of contact with the track irregularities, which, however, does not exclude the possibility of controlled selection. They remain stationary relative to the surface of the way up until the entire body will not pass over them. The presence of the engines on the support elements, allows to use different grippers, suction cups, webroster that secure the tracks on the surface and firmly hold the middle part of the vehicle even on the rock wall with a negative draft such a mover when moving the case one step is moved only one strong element, but not the majority, as usual with walking and climbing devices and creatures. This ensures his safety and cost-effectiveness.
Such a vehicle can be long and flexible to make turns, being fixed. In this case the machine frame may consist of separate short modules that are able to turn relative to each other in horizontal and vertical plane, for example, with the help of hydrocylinders.
Figures 2 and 3 show the cushion and the scheme to overcome such a snake – or humanization mechanism the most rugged of mountain terrain.
Obviously, the greater the length of such vehicles, the higher the speed, the maneuverability, driving safety and profitability. 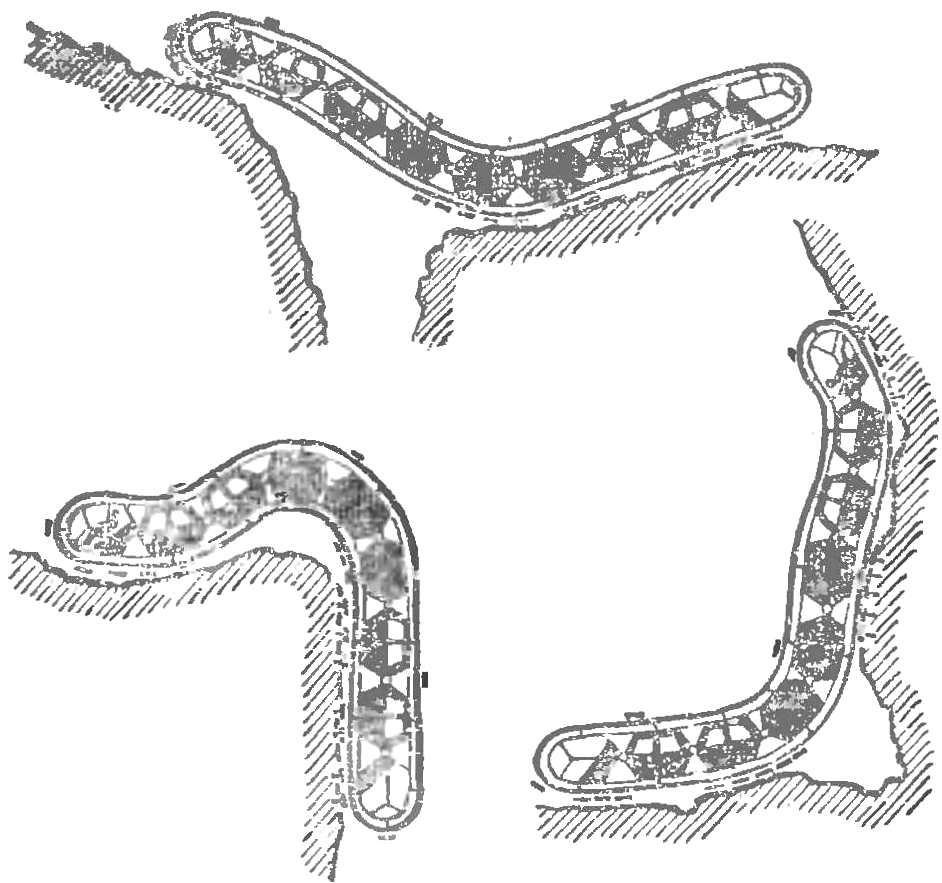 Fig. 3. Flow diagram Rover mountain trails.
Such a climbing vehicle will facilitate the construction in the mountains, accelerate the development of the mountainous areas and, perhaps, completely change all vehicle traffic in traffic in these areas.
But for the initial application mover truck climbing mountain ATV complex. It’s already a distant objective perspective. It is possible to go gradually, gaining experience, solving more complex tasks.
The very first stage machine with one hard mover, that is, having a rigid guide located along the longitudinal axis of the body: the installed support elements in the form of trucks with motors, crimp friction or toothed rollers, and devices of interaction with the surface in the form of plates with spikes. The rotation is carried out with the help of located at the corners of the machine side of the supporting wheels or skis.
Conceptual design (Fig. 1) and similar to the current model of this machine has been designed for very specific purposes: movement research laboratory on the surface of glaciers. But gradually, as familiarity with the project and model a growing number of people, it became clear that even this, the simplest machine and takovym mover is needed not only to glaciologists, explorers of the glaciers.
Yuri G. Arutyunov, Director of the Elbrus geographical station of Moscow state University, leading research work on the problem of sustainable development of mountain territories, the master of sports in mountaineering, believes that such a machine in combination with a second construction queue of the cable car “Azau-Krugozor” would provide attractive tourist route in the header of the Elbrus glaciation. Replaceable rechargeable power supply, whisper-quiet motors, no clanking of the tracks would provide travelers with high comfort, the trip would allow everyone to see the unique panorama of the Caucasus mountains and scenery of mount Elbrus.
Yuri Georgievich expressed a different idea such machines to overcome the snow slope of 20-30°, would succeed to the cable car for lifting skiers, especially in the newly reclaimed slopes, where the feasibility of construction of the lift is not always obvious.
L. SUKHANOV, engineer