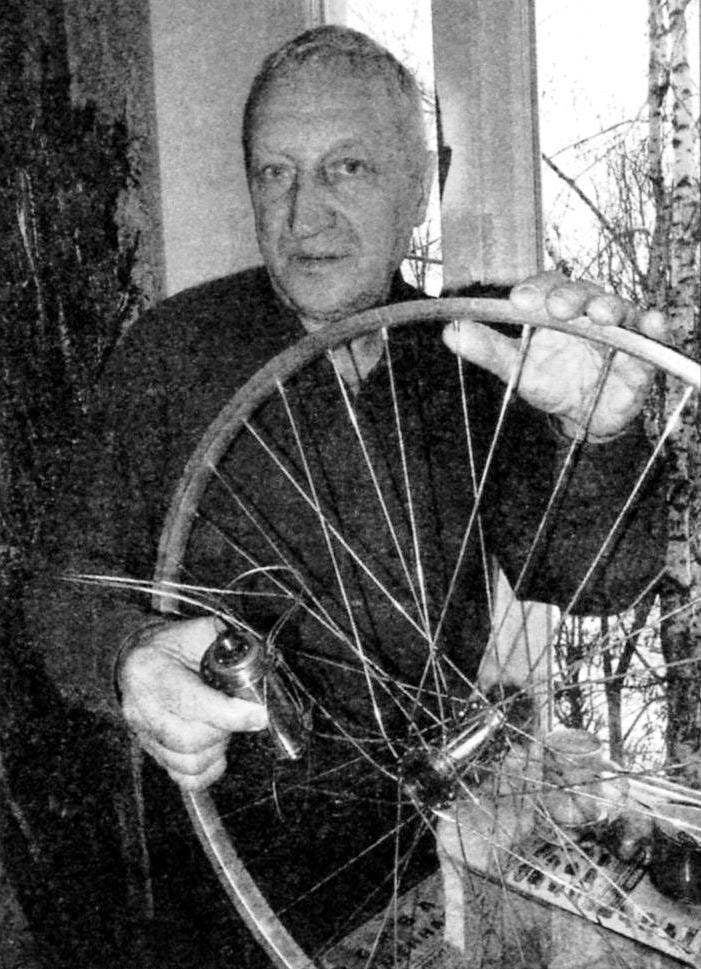 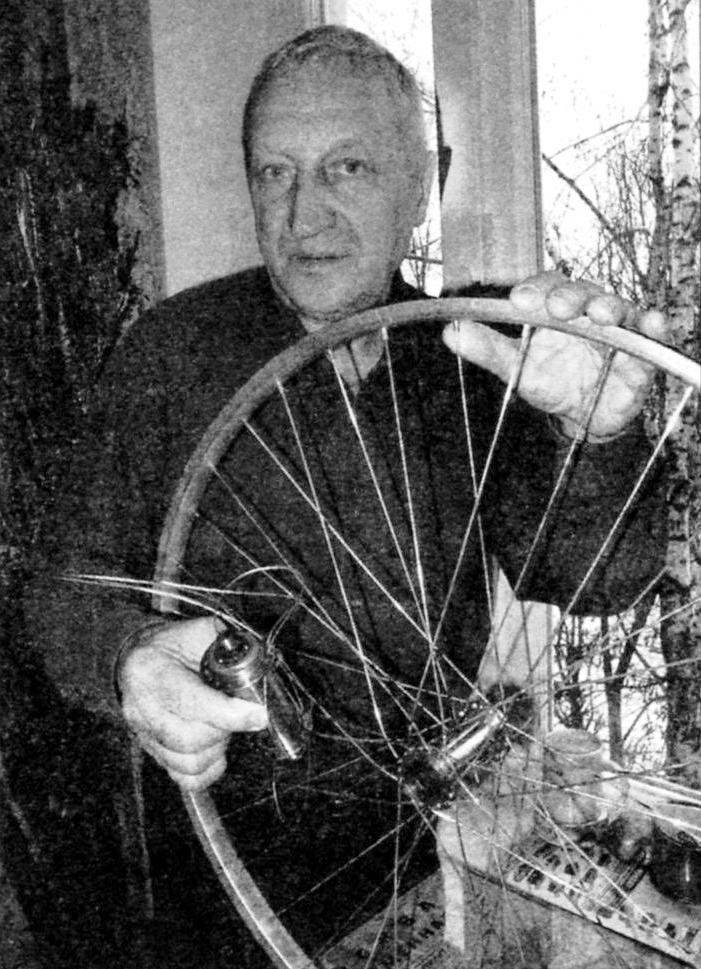 In 2007, No. 9 of our magazine was published an article by Muscovite Vladimir Aleshin on the invention of the Bicycle the hub of the rear wheel, capable of movement to choose the optimal torque and in a timely manner automatically shift gears depending on acceleration.
But life does not stand still, and the developer is constantly striving to improve their product. Today, the designer offers the readers an improved version of the sleeve for the same purpose (and most importantly, more simple and reliable – it is twice less details), but now installed in place of the front wheel axle.
Bikes are becoming more popular in our country. And abroad these vehicles in quantity has long been “pressed” cars: even in large cities, on the roads of General use for treadle machines emit a special track. Now mainly produces “mnogokratnyi” bicycles, mechanical and electronic switches. But first – the low efficiency and inconvenient to use, and the second is expensive.
But the mechanism turns any bike into floatmath: it is enough to replace the stock bushing front wheel on and proposed to make “perspicace”. Coming out of the new bushing, the cord routed along the frame to the rear of the switch, when the rate at which he will choose the time and include the right gear without the participation of the cyclist. 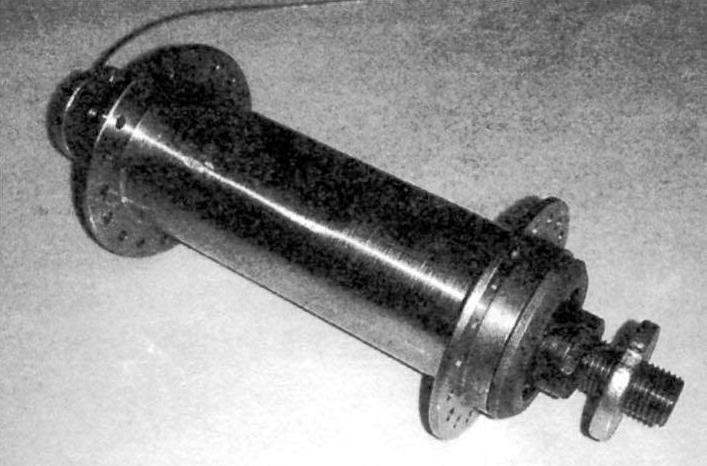 The mechanism for automatically shifting the axis of the front wheel (springs are missing)
The advantage of the proposed sleeve over the automation of well-known companies Shimano and SAP – the lack of a planetary gear and as a result – to minimize friction losses in the drivetrain. For this reason, the proposed floatmath easy. Firm Shimano, touting its automation NEXUS AUTO-D acknowledged; “Yes, it’s convenient for walking”, but in tourism and sport such automation is almost unacceptable due to significant loss of muscular energy.
Go directly to our mechanism.
With all the “untwisted” brand automation simplicity the proposed mechanism is obvious, just look at the drawing. It does not need computer support, in galvanic batteries, and even after a long winter of inactivity instantly ready to “fly”. The cost is much lower.
As in the previous hub, the whole mechanism of the automatic shifting (change of torque of the rear drive wheel) consists of several parts and a small group of steel balls placed in the cylindrical housing sleeve with spicewine flanges. Overall and mounting dimensions of the designed sleeve is about the same as on road bikes, and threaded limit switches of an axis is generally identical, so it is no problem to mount in a standard front (driven not leading) wheel without spokes.
Inside the rotating sleeve, to the walls soldered dowel (photo sleeve for clarity, made of transparent Plexiglas and dowel attached to it by a couple of screws), and snap ring is easily installed vraspor. All other parts are mounted on a fixed axis except the bearing caps, which also are rolled in the sleeve with its sides.
I note that the pictures of the gear Assembly do not exist for the small and large coil springs 7 and 19 and the flexible connection 30. But on the Assembly drawing (a spring and detailed on the drawings) they are.
HOW DOES THE MECHANISM WORK?
Conventionally, the entire mechanism can be divided into several components: defining, controlling, regulating, executing, and switching, although the latter is outside the sleeve. But it is not going to understand these nodes as some related items difficult to attribute to any one of them. Better consider directly the operation of the mechanism.
With the beginning of the movement of the front wheel, that is, the bushing 1 through the key rotates the link 22. However, the link 22 rotates freely, as it is located with a gap between the end faces of the coupling halves 21 and 24. In the original left position of the link 22 rests against the end of the ring 8 on the sleeve 1, which prevents the closing of the half-coupling 24 with element 22. The balance of the link 22 between the coupling halves 24 and 21 is provided by a spring 19, and the links 30. Link 22, the spring 19 and washer 18 are rotated. Connection 30 is connected to the flange 13 and pass through the grooves of the sleeve 20. The roller 11 provides an inflection point of connection between the link 22 and the sleeve 13, which rotates in the environment of vaseline. Property of vaseline is that the force of friction and the tension links 30 are dependent on the speed of the bike. Higher speed – greater the displacement of link 22 in the direction of the threaded half-coupling 21. Teeth end of the threaded coupling halves 21 and link 22 are closed. Since then, the rotation of the sleeve 1 via the key and link 22 is transmitted to the coupling 21, which is threaded section of the axis 4 is displaced and weakens the spring wire 29. The cable 29 controls the rear switch and loosening the cable tension of 29 Bicycle chain is reset with the largest sprocket of the cassette on the smaller sprocket. The cadence is not increased, however, the cyclist rides faster. With further increase of speed the process is repeated in a similar way, but the cadence remains the same, which satisfies a specific cyclist. In the extreme right position, the link 22 rests against the end of the sleeve 20 and opens the teeth of the threaded coupling halves 21 and link 22. Thus, the body sleeve 1 eliminates circuit switching mechanism in an extreme position. 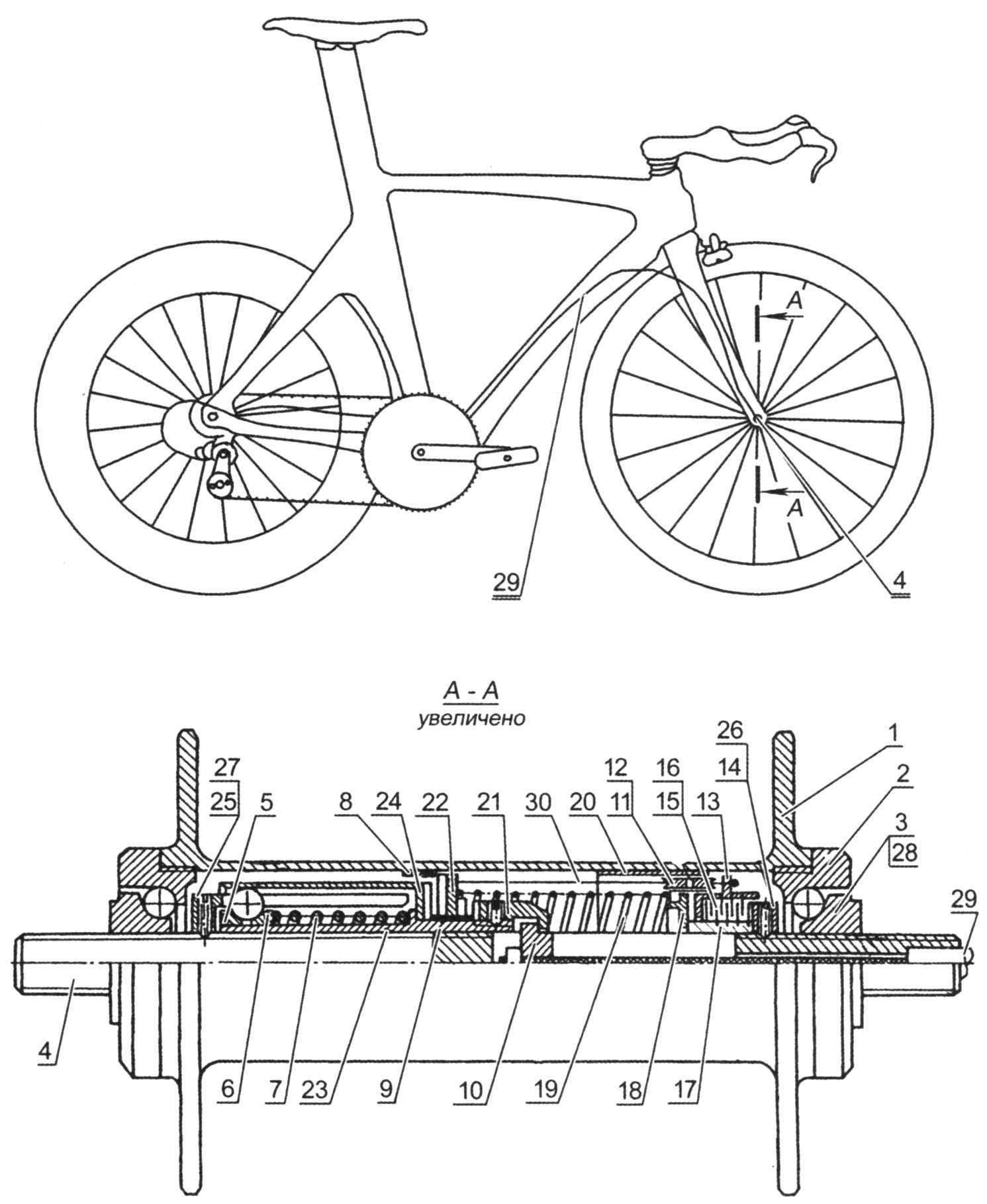 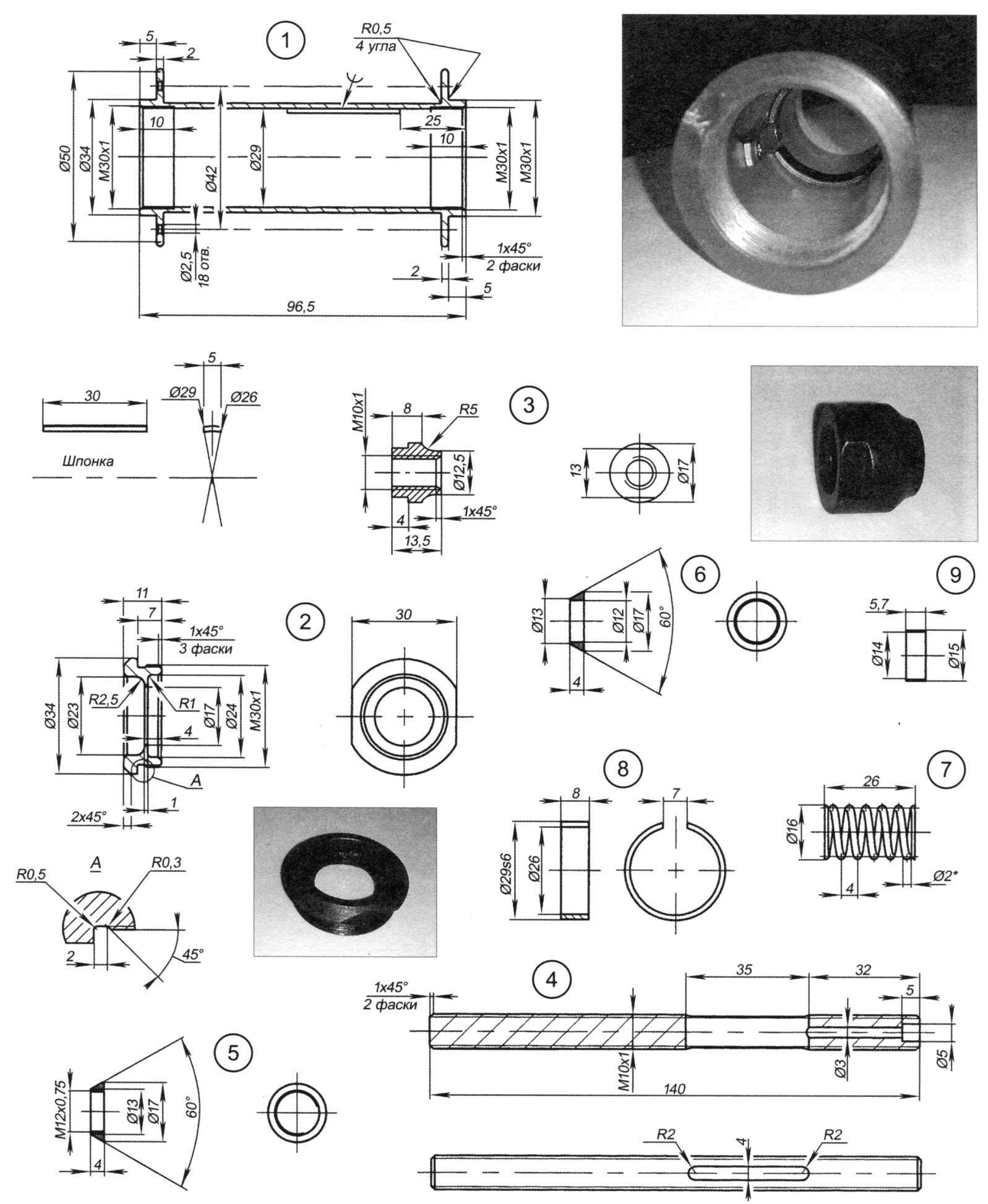 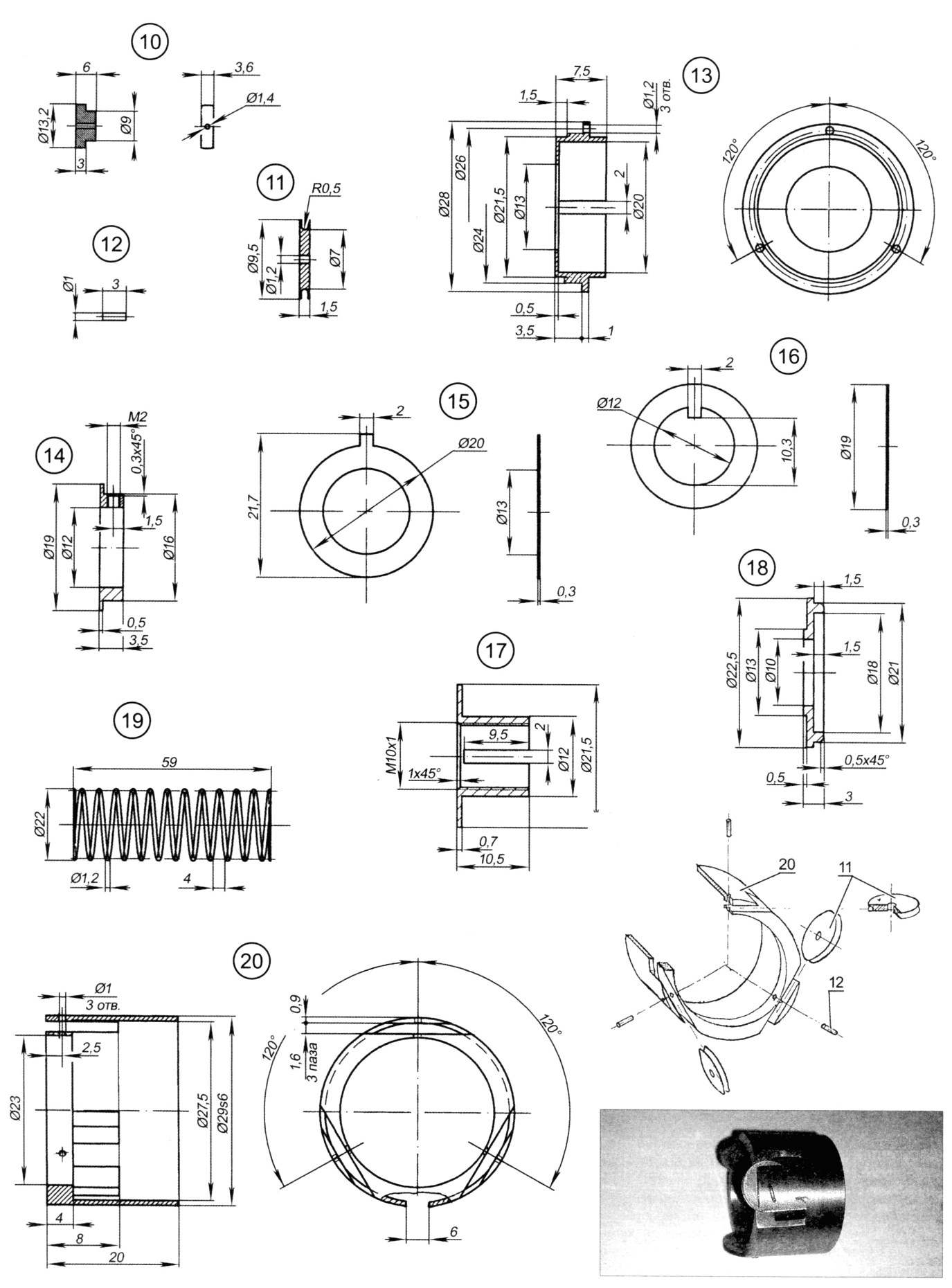 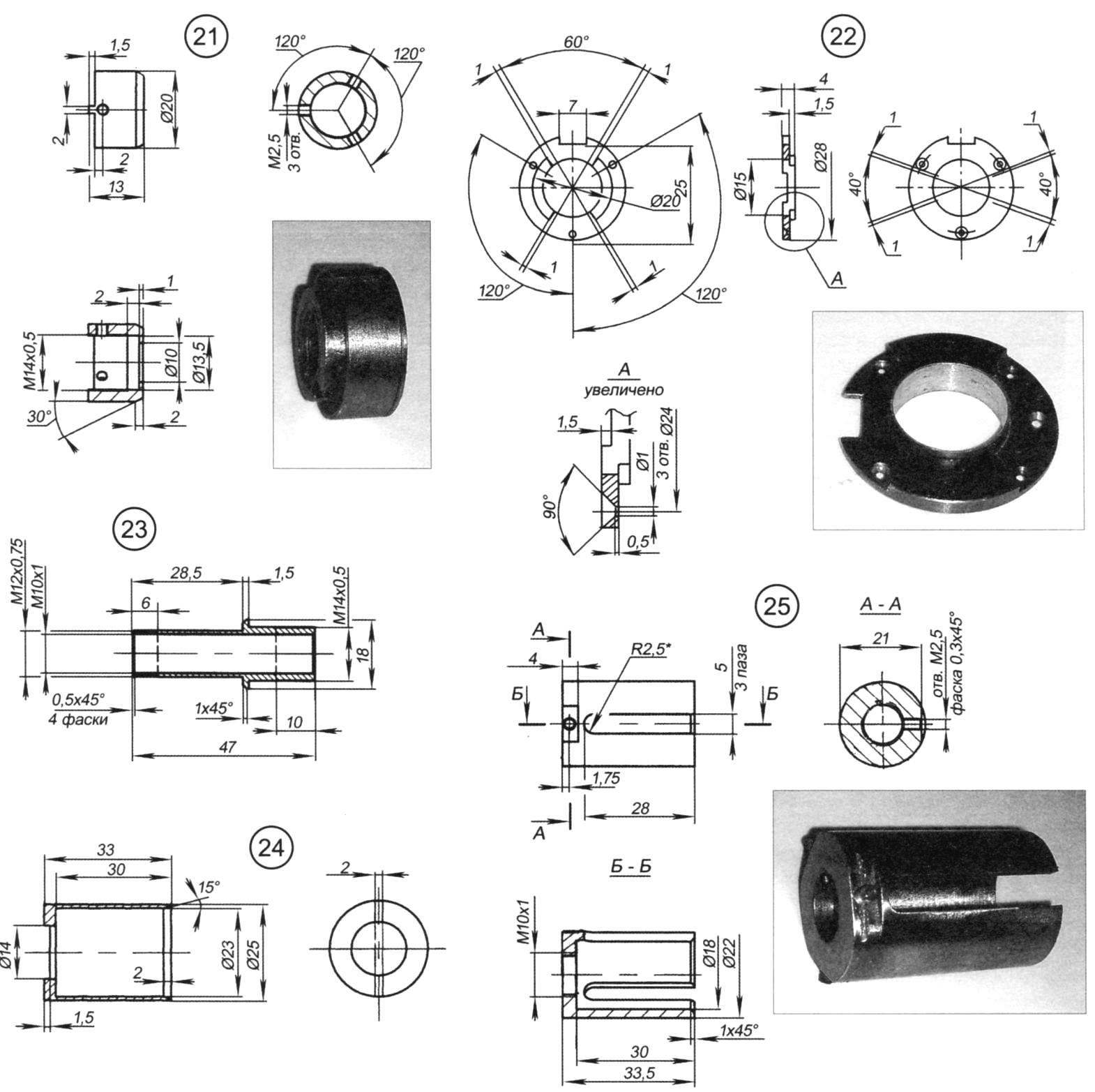 Bushing auto gear bike:
1 – sleeve; 2 – cover (2 PCs); 3 – nut (2 PCs); 4 – axis; 5 – the outer ring; 6 – inner ring; 7 – spring; 8 – thrust ring; 9 – spacer; 10 – biscuit; 11 – roller (3). 12 – the roller axis (3). 13 – Bush with collar; 14 – lock washer; 15 – outer ring (5 PCs); 16 – inner ring (5 PCs.); 17 – threaded ring; 18 – spacer; 19 – mainspring; 20 – ring; 21 – right-hand threaded coupling; 22 – link; 23 – left-hand threaded coupling; 24 – reversible coupling; 25 – fixed plug; 26 – screw M2,5 (3). 27 – screw M2,5 (3). 28 – ball Ø4,8 (25 pieces); 29 cable; 30 – the connecting link (cord thread Ø1)
The speed of the Bicycle decreases, for example, in the case of lifting the track, or increasing the viscosity of the soil. Decreases the force of viscous friction in the vaseline, creating a moment of rotation of the sleeve 1 relative to the axis 4. Spring 19, overcoming the reduced force, shifts the link 22 to the clamping teeth reverse halves of the coupling 24. Reversible coupling half 24 engages with the threaded half-coupling 23 through the balls 28. Threaded coupling half 23 is made composite and comprises a cylindrical body, cylindrical neck which rotates the reversible coupling 24. Spring-tensioned ring ensures rolling of the balls 28 without slipping on the track formed by the locking ring 6. Plug 25 eliminates the circular rolling of the balls 28. The balls 28 rotate without slip and can move only along the grooves relative to the stationary plug 25. The balls 28 to transmit the rotation of the coupling screw 23 in the opposite direction relative to the reversible coupling half 23. Coupling half screw 23 is displaced through the thread and pulls the rope 29 of the rear switch. A Bicycle chain is translated from a smaller sprocket to the adjacent larger sprocket unit. To the rear wheel is brought greater torque and biker without changing the efforts of the application on the pedals, overcomes the difficult part of the route. At the same he does not need to be distracted by changing gears: to remove a hand off the wheel (which is especially undesirable, and even dangerous, turns), to manipulate “coin”. Besides, the choice of speed on a bike with a normal gear change is a subjective process, and the proposed Bush – the objective is independent of the cyclist.
Switching speeds are strictly sequential fashion, from one star to the next, but very quickly, depending on the change of acceleration (both positive and negative).
At steady state the clearance between the link 22 and the ends of the coupling halves 21 and 24 is maintained. With a further decrease bike speed the process repeats in a similar way, but the cadence remains comfortable for the rider limit.
In conclusion, a few recommendations for technology in the manufacture and Assembly of sleeve: blank pieces of steel 45 (from which it is made, almost all the details of the mechanism and the bushing) should be improvement to hardening and tempering to 28 – 32 HRC; in the process of assembling the mechanism the friction surfaces of the parts to be covered with grease.
Boys on imported multi-speed bicycles just can’t hide jealousy when my daughter effortlessly overtakes them on steep ascents on his old Saturn with sleeve-machine: she doesn’t have to shift gears – peak (maximum) torque value selected by the machine, and its efficiency in the transmission of “bushing machine – wheel hub (rear wheel)” more than 95 percent.
V. ALESHIN