Homemade sports and tourism of the court, unfortunately, does not always turn out successful. In some uncomfortable to row, while others were poorly managed under sail, others “roam” by the motor, the fourth is too heavy for its size.
After analyzing the shortcomings of various homemade constructions and identify their positive qualities, it was decided to build a cargo ship, possibly more perfect, has good driving characteristics with any type of propulsion — oars, a sail, a propeller. At the same time this goal has been set: the boat needs to be simple and easy, have a good stability.
It seems this has been implemented in designed and then built design.
The shape of the vessel determined the two previously made, the most successful our boats. One was taken dimensions from the other lines.
The changes concerned mainly the hull plating. If it is not original, but in any case, unusual. But about it later, in the course of the story of technological sequence of works.
Power set of the case of Yala is made according to the longitudinal scheme. In a set laid the keel of pine boards with a cross-section 80×20 mm. we should mention that all the parts of the frame (except otherwise stated) made from pine wood. The keel at the bow is connected to the stem. In addition to the keel in the longitudinal set includes *12 stringers, two of fendering and four poligars (on both sides). Cross set consists of only three frames and transom. But the additional transverse strength to the hull ready Yala give three banks (benches): fixed front and adjustable middle, and back.
Glued the stem has a “toboggan” (smoothly rounded) form and is assembled from eight strips of cross-section 25×5 mm. Slats are connected to Sapone-zulage glue, do not lose their properties in water, polyester or epoxy resin with the respective components. These same binders glued and matched all other parts of Yala, including frames each of the eight reek-section 20×4 mm.
The bow would be easier to manufacture a composite — it is less time-consuming. Therefore, the figure shows such an embodiment. However, its shape is more angular and not so practical. This way you could do composite frames, but due to the reduction of strength would have to increase their number in the set, which inevitably weighted with the right Yala. 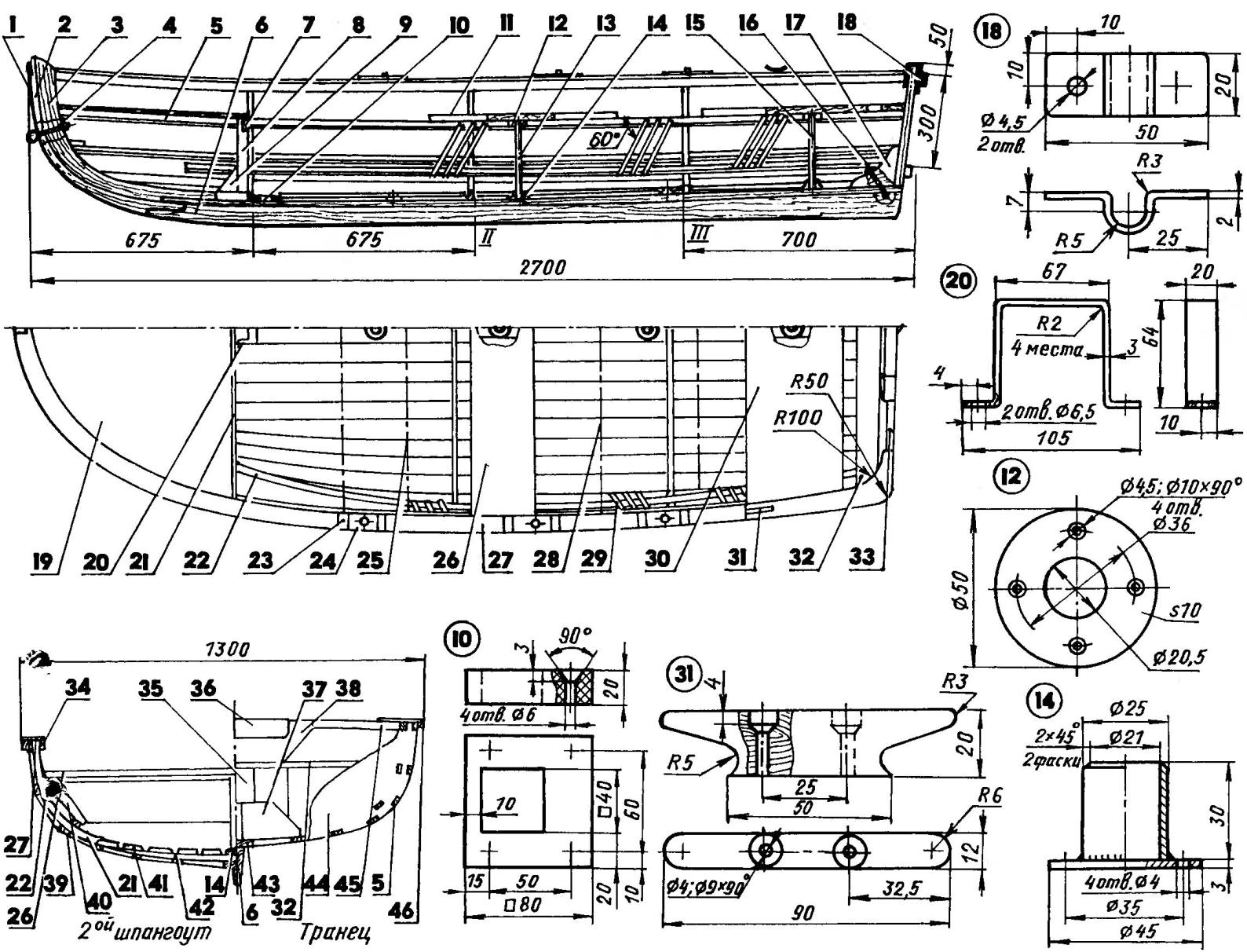 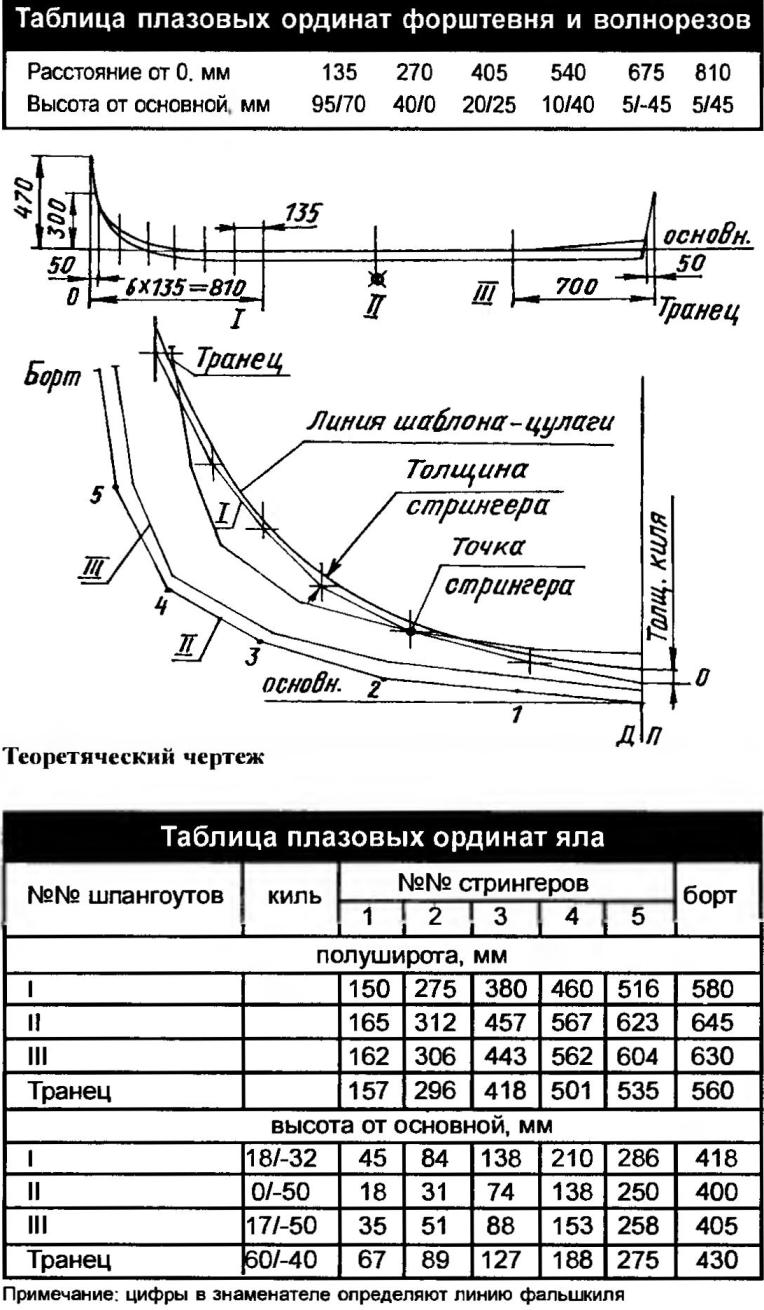 Template-zulage for bonding of parts made on the internal shape of future frames and transom subject to 2-3% residual elastic deformation of the wood.
Complete polymerization of the resin occurs at room temperature after seven to ten days, but for further work with glued in detail sufficient daily exposure (by this time the product is gaining up to 30 percent of the maximum strength). Although the adhesive deep into wood does not penetrate, the product is solid.
Power set case assembled on the slipway the keel down. The slipway is made of boards section 200×40 mm raised rib on the girders holding up her braces.
First, the slipway was installed the keel, and on it is fixed the stem, transom and three frame. The stem is attached directly to the keel with four M6 studs. Same pins, but only through cnico attached and the transom. The ribs connected to the keel with two bolts М6х65 each. All fasteners are tin-plated.
After the installation of elements of a set of cross they were made markings under the stringers, poligars and support planira that nailed first. Then on the sides are pairwise installed the stringers, starting from the stern. But first, to get the steep contours of the nasal tip Yala support planira and stringers to the first frame dissolved by Reiki. These parts of the longitudinal elements of the set were also soaked, bent, dried, glued, but not on the template-zulage, and the place. When this pair ends through spacers fastened on the stem. Side stringers are mounted in a set of stocks, and bottom — after removing the frame from the slipway. The stringers to the frames and stem were connected with galvanized nails usageb.
Such a design of the power set of Yal provides its hull displacement hull with sharp nose education.
The finished frame was first wrapped across the pitch 50 mm nylon twine. The twine was fixed on the stringer brackets of the 2-mm copper wire. Such a network not only protects the fiberglass from sagging between stringers, but also reinforces the case of Yala. After that, the frame was covered with fiberglass, ASTT(b)C2-0 with a carriageway width of 900 mm. Edges of panels between themselves strapped with nylon thread, and the butt put on the keel, with the temporary fastening of the rail on the nails.
Technological stages of production of Yala:
a — fabrication of glued parts: b — frame Assembly — cording to frame a fiberglass
The cording with fabric began with amidships (the middle) to the extremities: first to the stem, with stitching there is oncoming paintings fiberglass, then to the transom.
Impregnation of fibreglass with resin is not long delayed, as the canvas eventually SAG even under its own weight.
The first layer of fiberglass impregnated with epoxy resin ED-5 (EPOXY 1200/2200) — it creates a more rigid layer than the polyester binder. From impregnation to cure the resin on the canvas, appearing bumps, which promptly dealt. After curing of the “epoxy” all extra allowances of the canvas and the ends of the thread and the twine cut off. A separate place was leveled by epoxy putty. After complete polymerization of the binder the entire outer surface of the first layer was clean with emery cloth.
Subsequent layers of fiberglass (second and third) were glued on the same technology, but the blade was impregnated with the binding of PN-1 on the basis of polyester resin (PN-3). It is important that between the layers there was an air interlayer. In order to avoid dripping of the binder with the vertical surfaces of the fabric to increase the viscosity of the resin was added “white carbon” (kaolin). Transom fiberglass paste in a single layer.
As a result, applied technologies case turned out convex-sloping shape, similar to carvel planking dialed the covering of the boards.
After production of the fibreglass hull on the stem was mounted the breakwater, pre-fabricated on the same technology as the underlying detail. The breakwater is made of four pine strips 25×3 mm cross section and one of the upper rails of the same section of oak.
To the lower plane of the keel attached high oak keel. In cross section it has the form of a narrow parabola, and its height increases from the bow to the transom. With this design, the keel provides good handling Yala, and above all — stable motion for a given rate under any mover: paddle, sail, screw. Almost keel plays the role of a retractable centerboard, improving the stability of the vessel. To ensure the longevity of the breakwater and keel on their outer edges attached to the General fittings of brass bands section 15×2 mm and a length of 3.3 m.
Installation of fenders bars completed the manufacture of the body Yala.
Internal lining is generally common and consisted in the installation of podlasov, planchonia, steps, bow stationary banks with upholstered seat. Under it you can store things in bad weather. 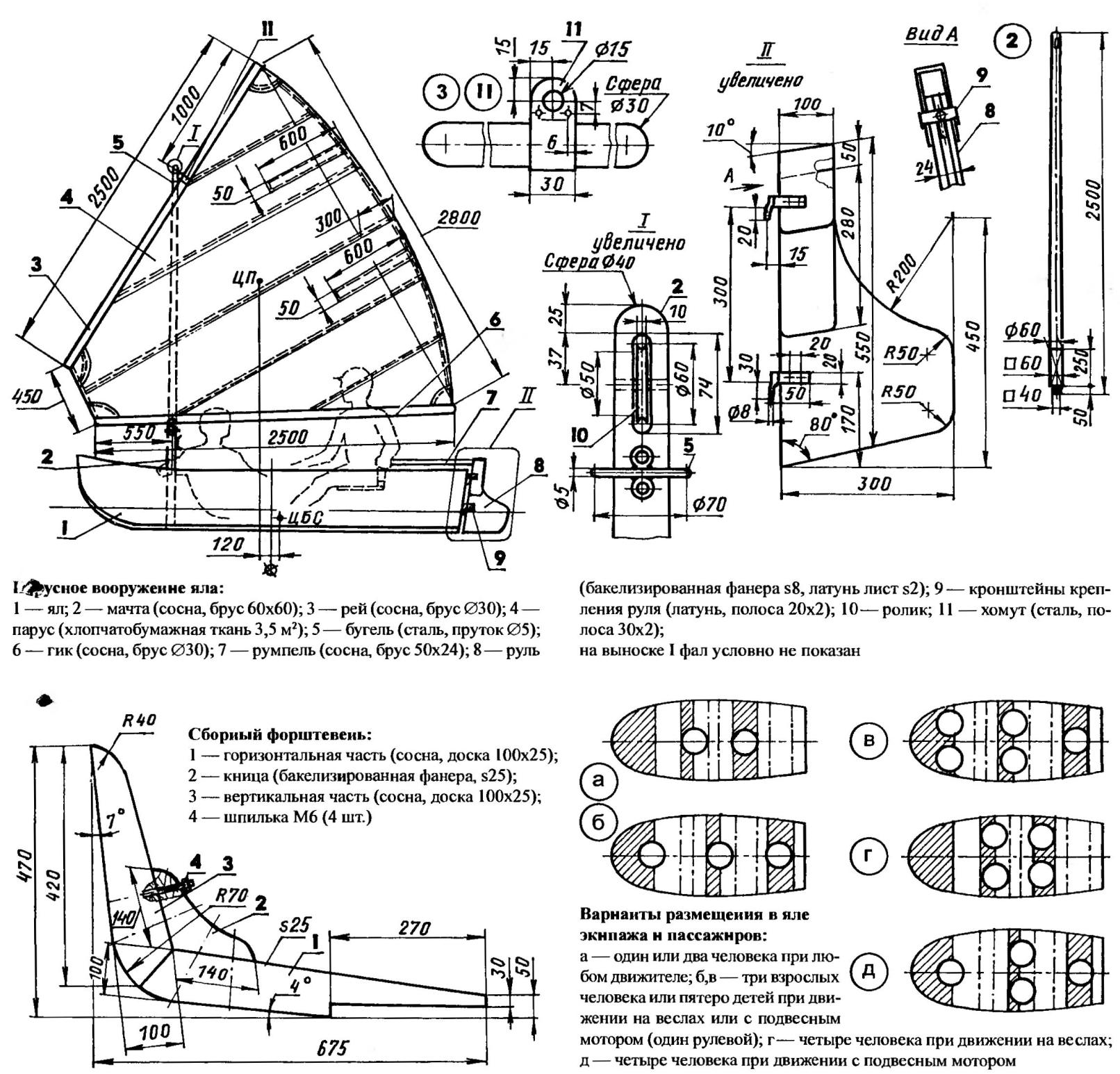 On the pot set the mounting clamp to the mast. Middle, and aft banks of the 15-mm plywood can be moved between depending on the mover or the physique of passengers and crew members. In accordance with this set and footrest on podagorsk and support oars on lanshire. Under the mobile banks are pillars of duralumin tubes with a diameter of 20 mm. though They complicate the design, but the gain in weight of cans. At the bottom of the yawl laid duckboards from the pine strips section mm 60×10, United floors (can be combined with straps). On lanshire, closer to the stern on both sides are mounted a pair of ducks for mooring to the pier Yala and attaching Shkotovo the end of the sail.
Paddles also homemade.
Sailing rig is designed as raked cat. The mast is installed to the steps, mounted on the keel, and is attracted by the yoke to the forward Bank. Mast and spars are made of pine wood without knots, twice proolifki and varnished. Acceptable also the option of making suitable dural pipes. The connection of the mast on the brackets. Sheets, halyards and ends are made of nylon rope with a diameter of 15-20 mm.
The sail is made from cotton fabric, which is twice pre-soaked in hot water with intermediate drying, the fabric of the village. Otherwise, after the first rain the sail will be hopelessly deformed. The same treatment was subjected to and thread. (To do without these preliminary operations, the sail can be made from synthetic fabrics: Bologna, lavsan or Dacron.) On the top and bottom katarinam sails stitched pockets for Rey and boom, on the back foot is made of two Latin-pocket.
Outboard motor for yawl must be of a power not exceeding 5 HP It is better to mount on the transom in the middle, and slightly to the side. Wide aft end of the vessel allow to do it, which in turn improves the alignment of the yawl and makes it easier to manage them.
The small size and weight of the Yala allow to transport it, not only for the trailer or the trailer, but the roof and on the trunk of the car, and for short distances even carrying two arms.
Technical characteristics of the skiff
Length the greatest, m…………………………………………………2,7
Maximum width, m………………………………………………1,3
Board height on a midship, m…………………………………………0,4
Weight, kg…………………………………………………………………….40
The sail area, m2……………………………………………………3,5
Power pendant
motor, HP………………………………………………….not more than 5
Capacity:
adults……………………………………………………………..to 3
children………………………………………………………………………to 5
H. NEIZVESTNO