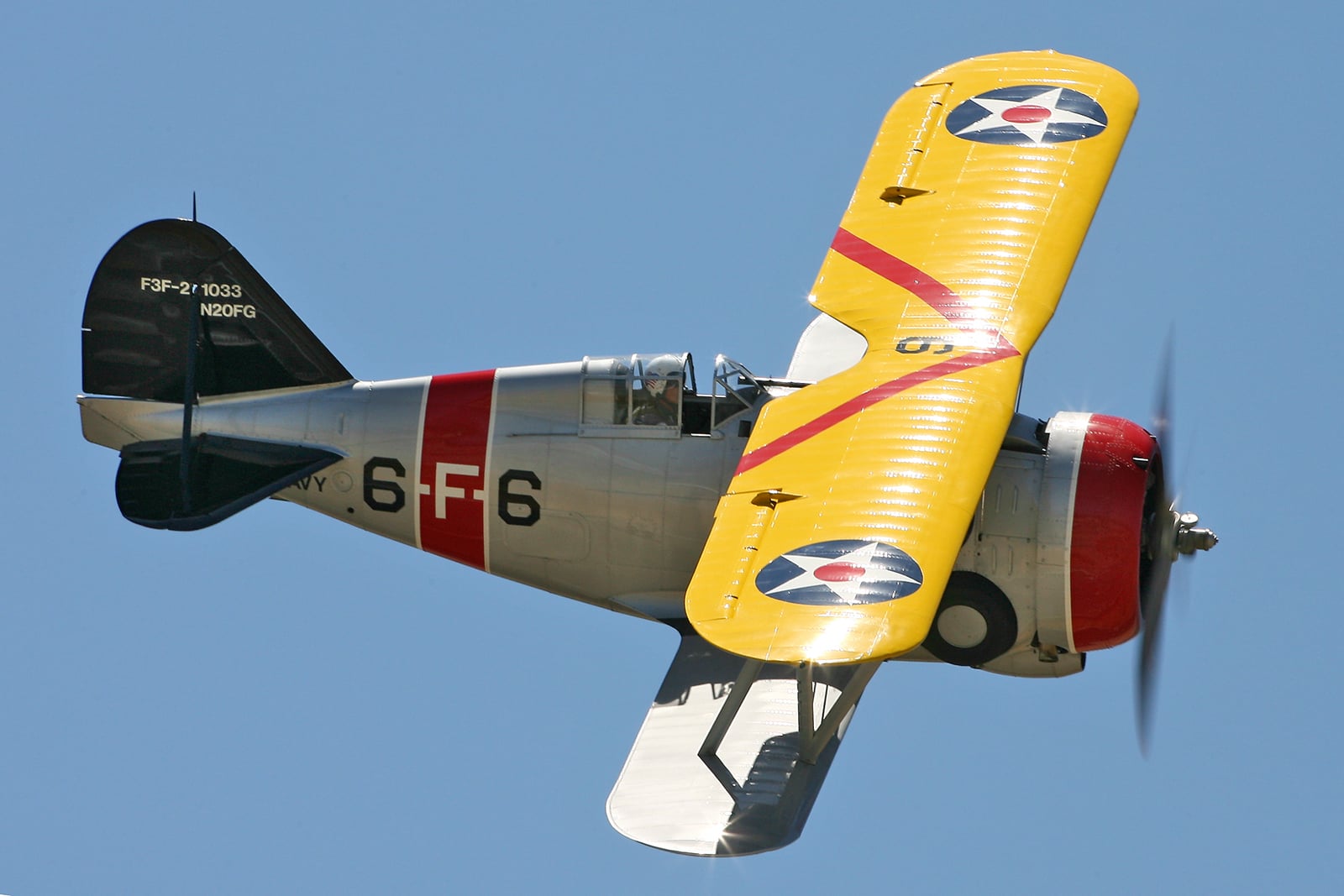 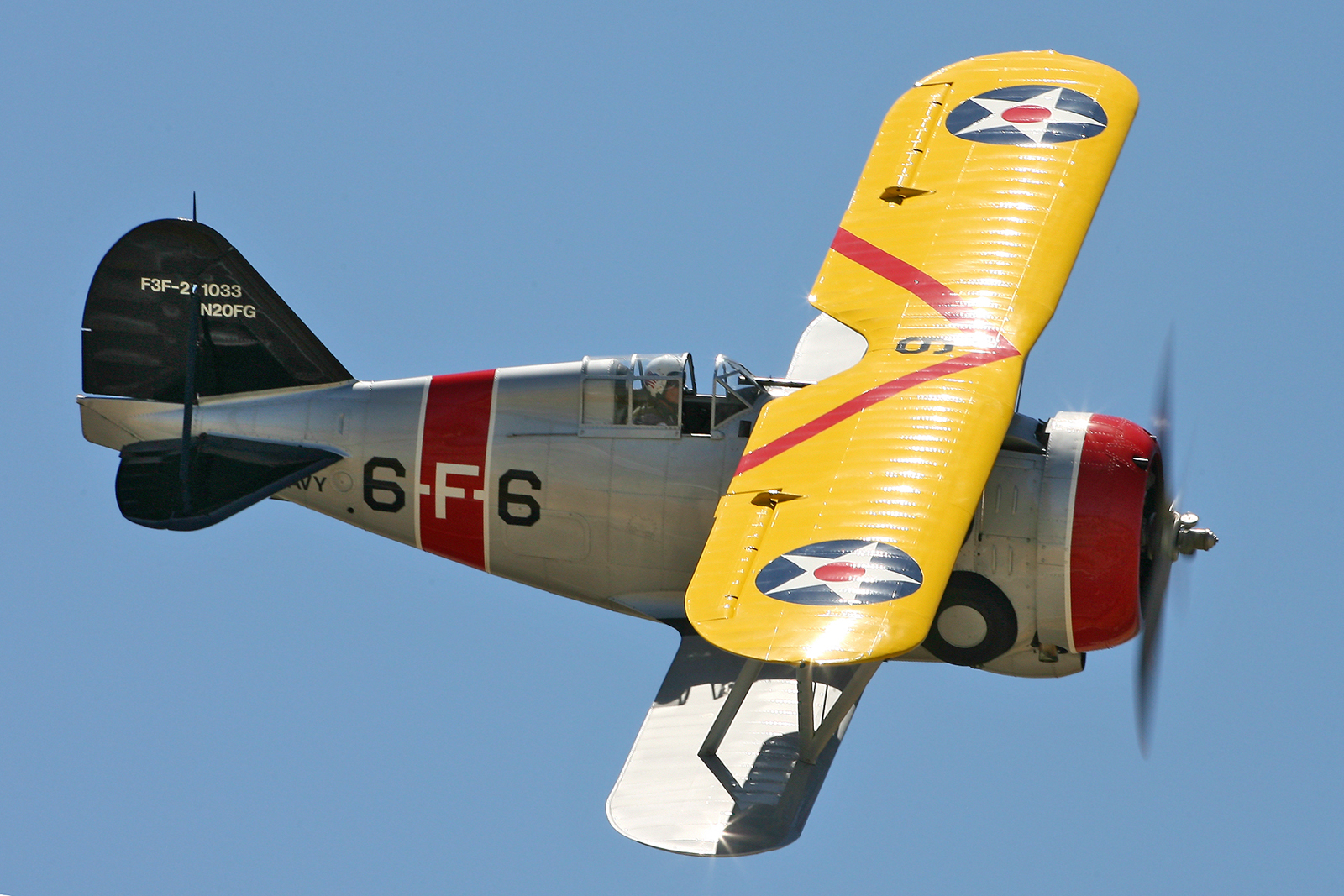 Carrier-based fighter Grumman F3F of the company. In the early 30-ies of the American company Grumman was the undisputed leader in the production of fighter biplanes for carrier-based aircraft. The reason for this was the desire of the designers of this company to apply on their aircrafts with the latest technical achievements. The firm’s assets — development of the original scheme of the landing gear, enclosed cockpit and all-metal fuselage-monocoque with a smooth lining.

In October 1934 the firm Grumman began designing the aircraft, which organically focused all these design innovations. This machine became the latest in a family of carrier-based fighter biplane aircraft F3F.
Development F3F wearing at the design stage brand designation G-11, began on 15 October 1934. This date coincided with the beginning of serial deliveries of the previous model of the company, Grumman — fighter, the F2F-1. The initiator of the new machines was the company itself. In an effort to focus the attention of officials of the military authorities on the lack of stability and poor landing characteristics F2F, she tried to make a new car more perfect.
Representatives of the Navy gave the plane the designation for F3F-1. When a large resemblance with the new F2F fighter had significant differences. The fuselage of the F3F-1 was extended by 533 mm, 1120 mm increased wing span. The diameter of the wheels of the main chassis has been reduced — this would make the plane less “paunchy”.
Starting the dive from a height of 2438 m, Collins in the output generated 9-times the overload, and the design of the fighter could not resist: the aircraft came off the engine and wings. The fuselage fell four kilometers to the East of the Grumman plant in Farmingdale. Eyewitnesses of the fall tried to pull the body of the pilot from the crumpled fuselage, but there was a fire…
Testing continued on the second prototype, which was given the same serial number. The design of the machine has been strengthened. The first flight took place on 9 may 1935. Four days later the car was transferred to the air base Anacosta for flying by military pilots. May 17 pilot Lee Gelbach fell into a tailspin; in an unsuccessful attempt to bring the aircraft out of a death spiral, he made 52 of the coil and at a height of 610 m jumped with a parachute. The plane continued to stopwrite to the ground.
After this incident, the designers of the firm Grumman obsessed with the refinement of a fighter. The third prototype, the increased area rudder and found two more small rudder under the aft fuselage, in the area of brake hook. At the request of the military, airline put a more powerful engine R1535-84 and the new air screw. Powerplant was 20 kg lighter than the old, and to preserve the alignment had to the front of the crankcase to attach a cargo — steel pipe filled with bolts.
These improvements have delayed flight testing until July 10, 1935, although in the construction of the third aircraft was used some parts from the second. The firm was in a hurry for good reason: the Navy urgently needed a new fighter. In operation recently joined the aircraft carrier “Ranger”, were laid two heavy-type aircraft carrier “Yorktown”, so that the overall needs of the Navy in the fighter was estimated at 150-200 aircraft.
24 Aug 1935, the US Navy ordered 54 of the firm Grumman fighter F3F-1. Finalized testing of the third prototype XF3F-1 was successfully completed in March 1936. Delivery of production aircraft F3F-1 lasted from January to September, 1936. On serial fighters instead of right 7.62-mm machine gun mounted 12.7-mm machine gun. Such weapons would become the standard for all subsequent modifications. Like all other fighters of the firm Grumman, F3F-1 had adjustable horizontal stabilizer with a working range of angles from +3,75° to -2,50°.
The first division, received a new fighter, the squadron became VF-5B. “Ranger”. During their operation there have been several accidents when the training dogfights the pilots to pilot the F3F-1, all of a sudden lost control. The investigation of air accidents showed that the cause of this was the destruction of the attachment of the upper wing or the Aileron hardpoints. The firm has gone on the introduction of restrictions on maximum overload of up to six times.
July 1, 1937, began the reorganization of marine aviation, the squadron received a new number and color scheme coloring.
After adopting a fighter-monoplane F2A-1 Brewster company the biplane GRUMMAN F3F-1 were led to training units and flying schools.
Work on a new fighter monoplane F4F-1 firm Gmmman was slow. The developers had big problems with the power plant, and in the interim, the management company has offered the military to modify F3F, setting him on 865 HP engine WRIGHT R1820-G5 CYCLONE. With a motor of such power characteristics of a fighter-biplane did not differ from the respective characteristics of the fighter-monoplane. According to the calculations of designers, the biplane could have a top speed of 411 km/h, and installing turbocharger allowed to bring the ceiling plane to 9205 meters. 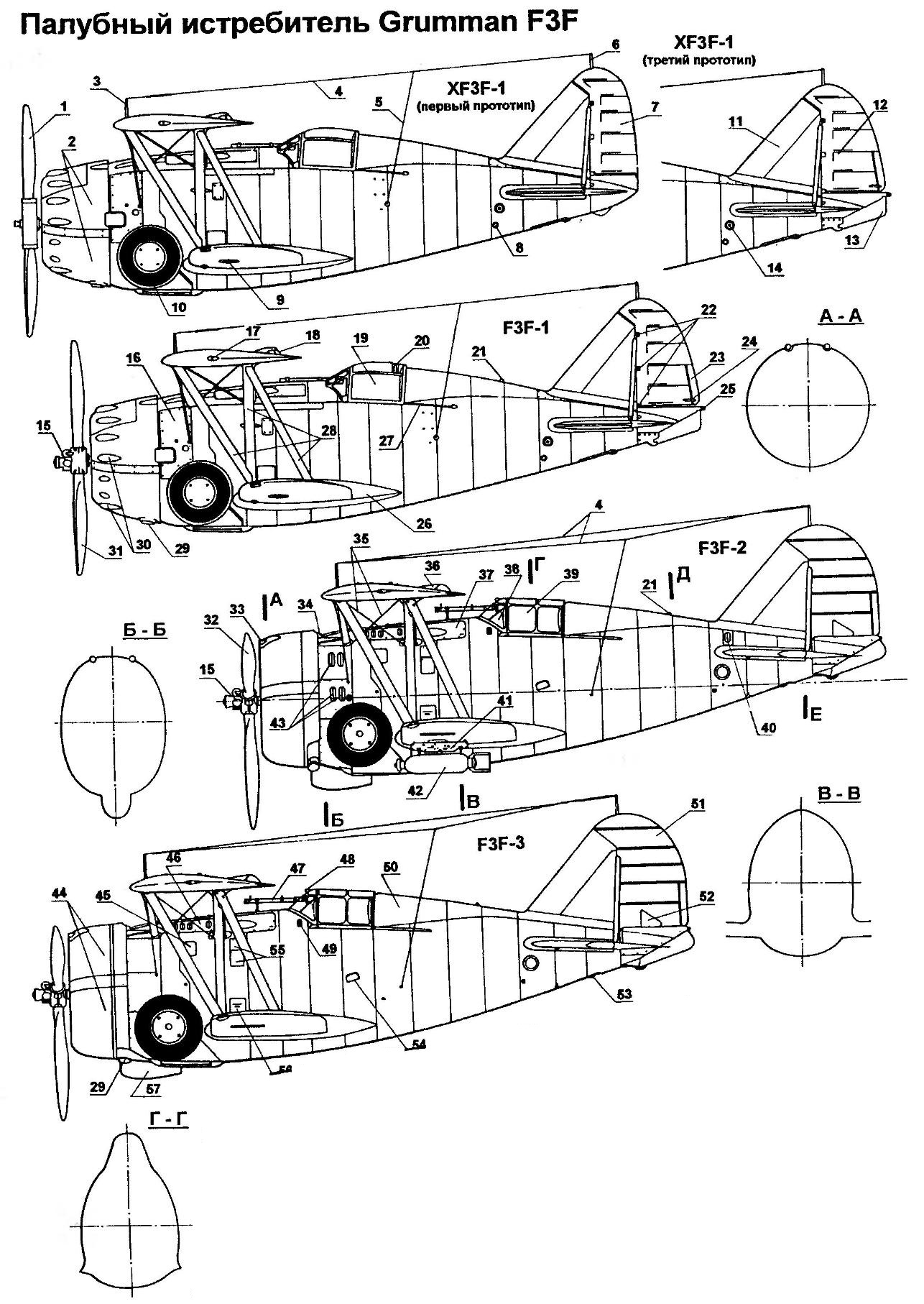 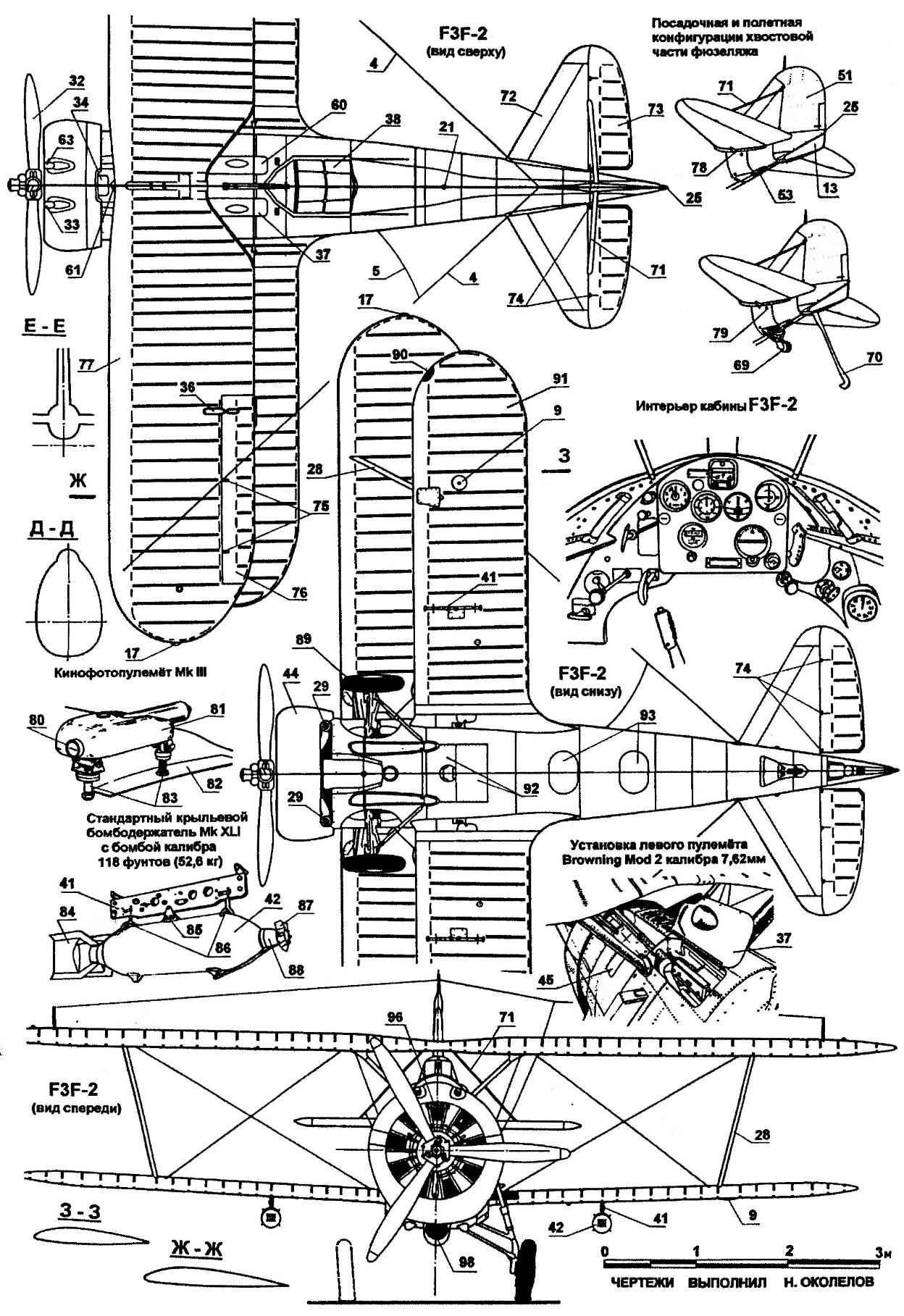 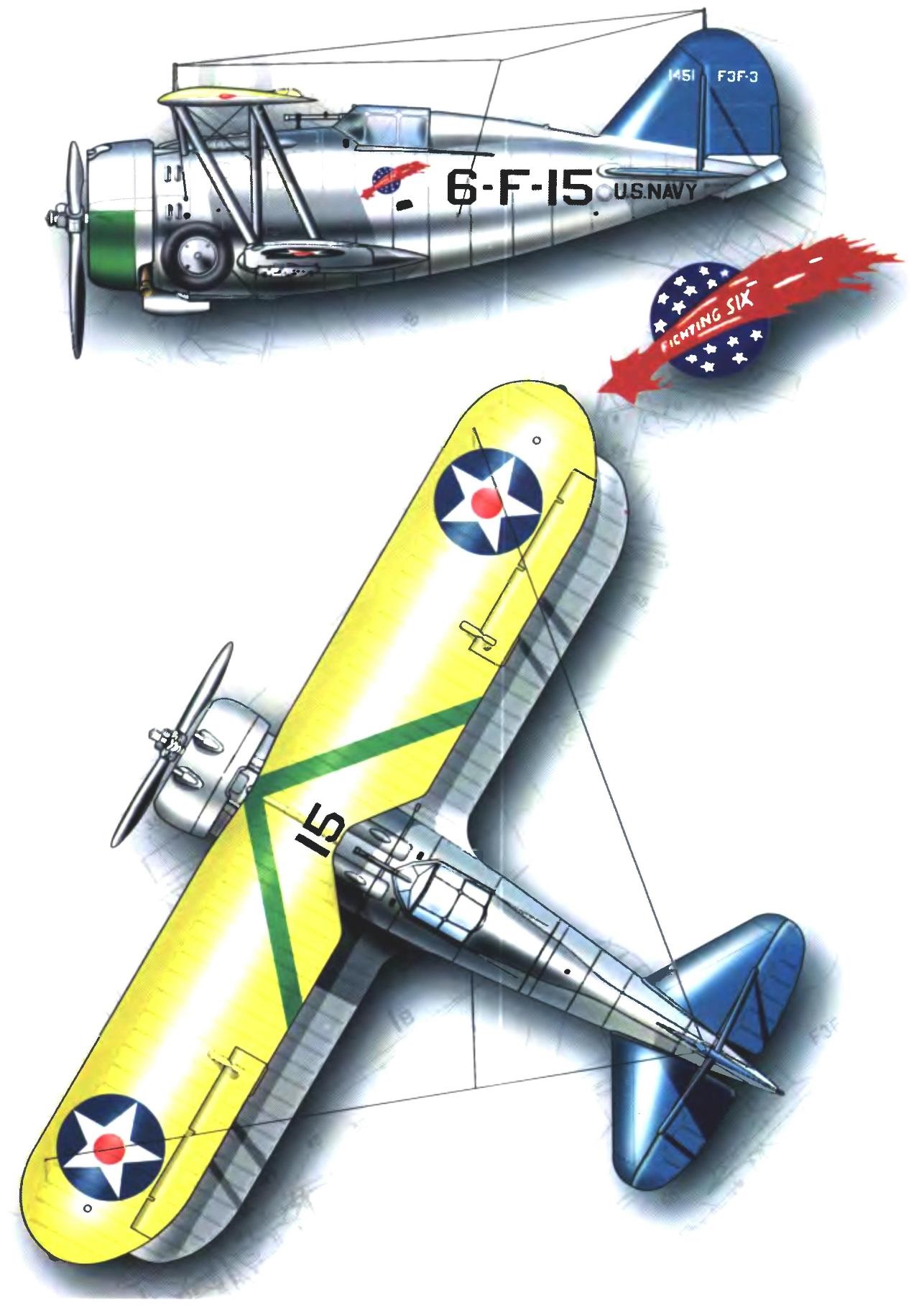 Fighter F3F-3 from the squadron VF-6. August 1940
The wing fighter was solid wood. The area of the biplane box was from 24,21 m2. By construction, the upper and lower wings were identical — both had two-spar box-type. The lower wing was attached to the second and third force the frames. Rigidity single and biplane box wing is further provided with profiled belts-braces. The upper and lower wings between a connected N-shaped strut.
Longitudinal power set of the wing was rib truss assembled on the glue. Additional rigidity to the wing — upper and lower — ensured internal cable braces. The entire surface of the wing had fabric covering. Ailerons were located only on the upper wing and had a power set duralumin and fabric covering. Control ailerons — hard.
On the left console lower wing mounted retractable landing light. On the bottom of the wing consoles could be installed two MK XLI bomb rack under the bombs of MK IV.
The tail Assembly was an all-metal power set. Stabilizer and fin were trimmed with duralumin sheets and rudders and height of the canvas. The installation angle of the stabilizer can be changed by using the knob located on the left panel of the cockpit.
The rudder was mounted trimmer to compensate for the effort on the pedals of foot control. Rudders — flexible cable. To ensure greater rigidity of the tail stabilizer and fin connected between the profiled struts. The hinge of the rudder and the height is covered with spring-loaded lids.
Fighter chassis — tricycle, tailwheel. System retract landing gear — hydraulic, with the possibility of a mechanical emergency release manually. Control of the landing hook is also hydraulic. The main chassis had a system of cleaning that are typical for carrier-based aircraft of the mid-thirties, produced and engineered in the United States, in which the strut and wheel were involved in special niches in the lower part of the fuselage. Svobodnodispersnye the tail wheel retracted into the fuselage in flight. Amortization of landing gear — maslanopodobnaya.
The power plant of the aircraft consisted of nine air-cooled engine company Wright R-1820-22 CYCLONE power 950 HP Engine was completed all-metal three-bladed variable-pitch propeller right hand rotation with a diameter of 2740 mm. engine Start is carried out from an onboard battery. The exhaust gas was diverted to a common manifold from which two of the exhaust pipe output into the atmosphere. Hood the streamlined shapes such as NACA completely covers the entire engine and reduced aerodynamic drag.
Fuel contained in two fuselage fuel tanks— mostly — with a capacity of 314 liters located between the first and second power frames, and more — with a capacity of 178 liters, installed at the bottom of the fuselage between the second and third power formers. On top of the fuselage housed the 34-litre tank.
The aircraft was equipped with a fire protection system. Armament of the fighter consisted of two synchronized machine guns of the type Browning MK.2. Left front cockpit was mounted 7.62-mm machine gun with an ammunition load of 200 rounds, right 12.7 mm machine gun with an ammunition load of 50 rounds. Ammunition was placed in the cartridge boxes. Supply of ammunition — belt. On the lower wing provided for the installation of two bomb racks under XLI Mk bomb MK IV caliber to 116 pounds (52.7 kg).
Flight characteristics of the GRUMMAN fighter F3F-3
Wingspan, mm………………….. 9750
Length, mm………………………………7100
Height, mm…………………………….3170
The wing area, m2……………………….24,15
Maximum speed, km/h……………………….390
Cruising speed, km/h………………………..241
Practical ceiling, m………… 9204
Flight range, km……………..1327
Empty weight, kg……………………. 1477
Maximum takeoff weight, kg………………. 2042
Armament:
— 1 machine gun 7.62 mm
— 1 machine gun 12.7 mm
— 2 bombs caliber 52,7 kg
N. Food reserve was, A. CHECHIN, Kharkov