After reading No. 1 “M-K” for the year 1989 description electronic switch-off “weight” of the car, decided to use it as a simple anti-theft tool. However, the replacement of toggle on the button (as advised by the project author V. Arapov) or reed switch occurs very undesirable moment when the voltage produced by the generator will be equal to the battery voltage, the transistor closes. And in the future on-Board vehicle network will be powered by only one generator. And as for fuel economy the engine is regulated to the minimum idling speed, the voltage generated by the generator in this mode, will be low. Therefore, at the moment of starting off (as in a “weak” generator, and when the light is turned on) the engine may stall. But the main danger occurs when emergency braking, as when the engine stops, the on-Board system is de-energized and the brake lights do not burn!

These shortcomings are easily eliminated with little overall use of reed relays RES 55. And indeed the essential electric circuit device is thus significantly simplified. “Mass” here is included a magnet up to her body, the relay, and turns off automatically, but only if “blackout” of the engine with the ignition key.
However, when using the device as anti-theft devices, it is desirable to replace the semiconductor diode in the same circuit by the more powerful. For example, D132-50, as a secretive installation in the engine compartment deteriorates the cooling. We should pay special attention to the internal resistance of the diode in the open state, the voltage Drop across this circuit element should not exceed 0.5—0.6 volts below the battery charging process are not disrupted yet. To turn off the “masses” in case of short circuit it is advisable to install a suitable switch follower but with a MOSFET in any convenient location of the cabin. 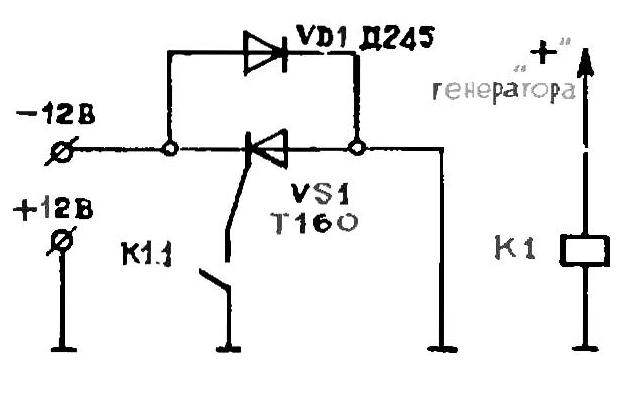