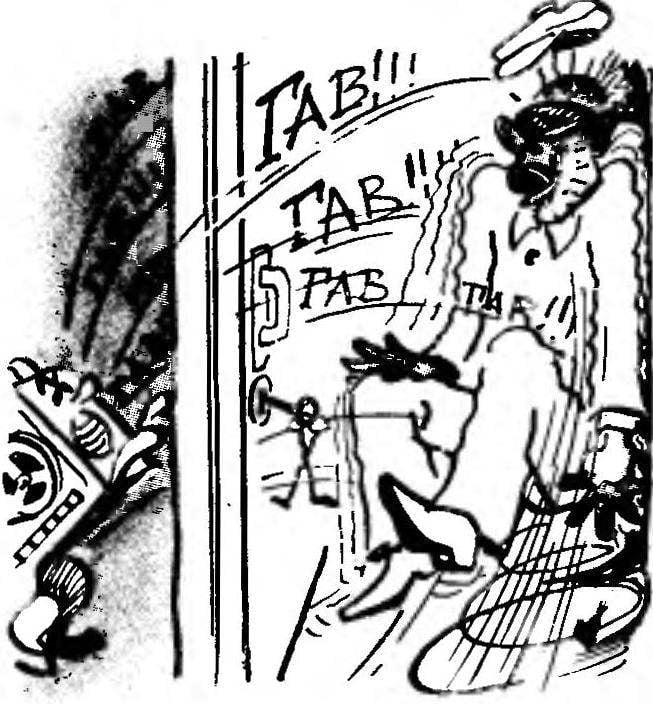 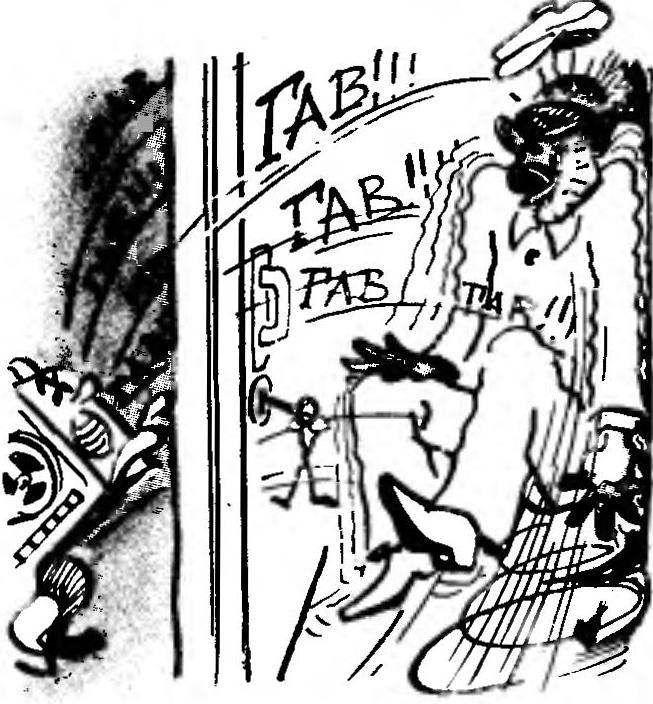 In these troubled and difficult time when the crime situation every year more complicated, the important importance of watchdog and signaling device that protects property from encroachment by criminal elements. Among these developments, I have designed instrument, to collect which can anyone, even a novice radio Amateur. Using as actuator recorder of any type, on a looped tape which recorded tigrama barking dog, it simulates presence in the building watchdog. And the electronics triggering happens at the moment of approach or touch of a human hand to the castle.

The proposed device (m x m) consists of three relays: capacitive, assembled on the transistors VT1, VT2 and VТЗ, time relay (VТ4, VТ5) and Executive (VТ6).
When approaching hand or touch the lock decreases the generation frequency of the transistor VTI. Accordingly decreases and the current flowing through this transistor. On VT2 and VT3 built a DC amplifier that is connected to the variable resistor R5. Decreasing the current, the transistor VT2 is closed, a VT3 open. Relay K1, breaking its contact To 1.1. When this is interrupted the supply circuit of the locking voltage to the base of transistor VT6. The last opening, triggers a relay KZ. And it is, first, a contact K3.I opens the circuit to charge the capacitor C6 and moves to samaritana through K3-I K2.1, R15. Second, another contact (K3.2) relay connects to the mains to any Executive mechanism (a tape recorder, siren, electrosonic, etc.).
The capacitor C6 begins, in turn, discharged through the circuit: plus lining S6, a variable resistor R10, the base-emitter junction of the transistor VТ4, the negative electrode C6. But on the transistors VT4, VТ5 built DC amplifier. And when C6 is discharged, VТ4 closes and opens VТ5. Work relays K2, which contact K2.1 break the chain lock short-circuit and the contact K2.2 will provide voltage in the base circuit of the transistor VТ6. The last is locked and the relay circuit switches its contacts to the original position.
Thus, the actuator will only work for 7 to 60 C. the Duration depends on the position of the engine variable resistor
In the case of door opening the electric circuit of the actuating relay is broken. For this purpose, is provided a reed switch SFІ.
As can be seen from R and S. 1, the entire circuit is assembled from readily available parts. The resistors can be of any type. In addition to RZ, which is wound with a wire of nichrome or tungsten resistor on the aircraft type-0,5 nominal value of 100 ohms. Electrolytic capacitors of the type K50-6, others — MBM and KM5 (КМ6). Transistors, also indicated in the diagram, can be: VT1 — П401 — П403, П416, П422, П423; VT2, VТЗ. VТ6 -ПІ6, МП39 — МП42; UT4, УТ5 — МП36, МП37, MP38. As relay K1 is used РЭС10 (passport RS4.524.303) ,K2 — РСМ2 (passport Ю171.81.31.), and KZ R-ЭС9 (passport RS4.524.202.). 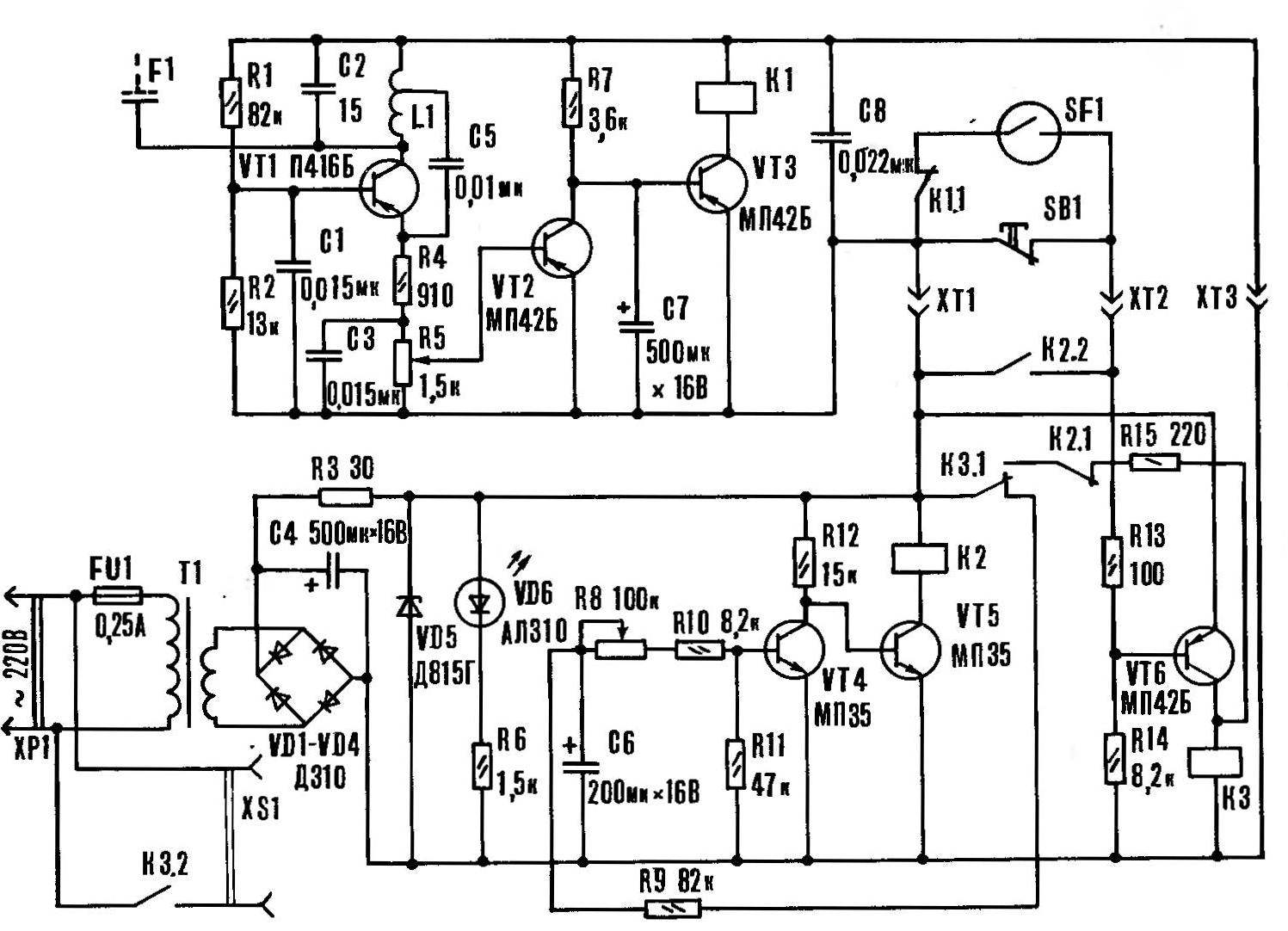 R and C. I. a circuit diagram of a security device. 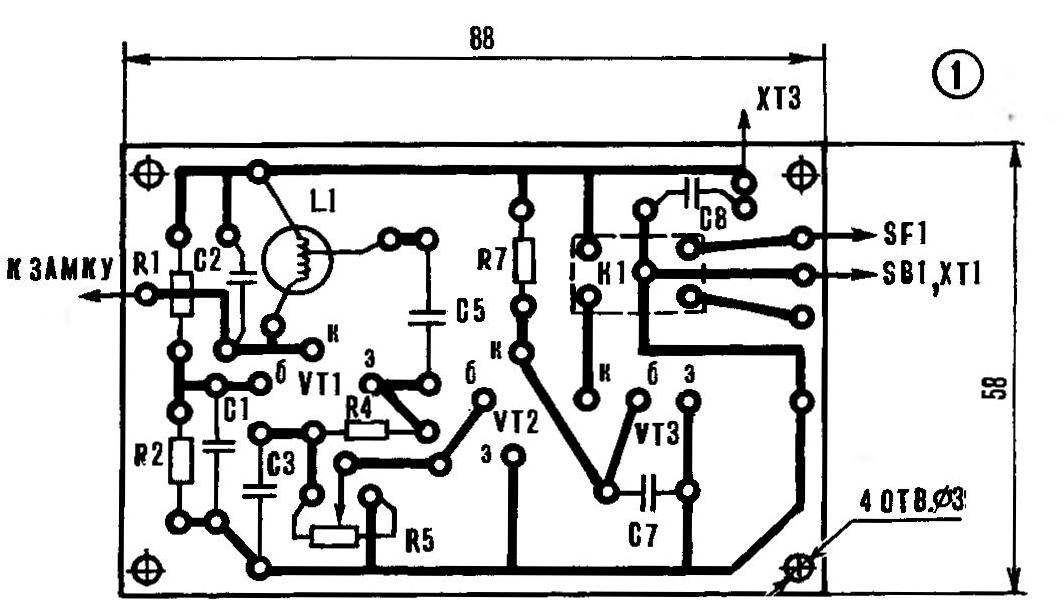 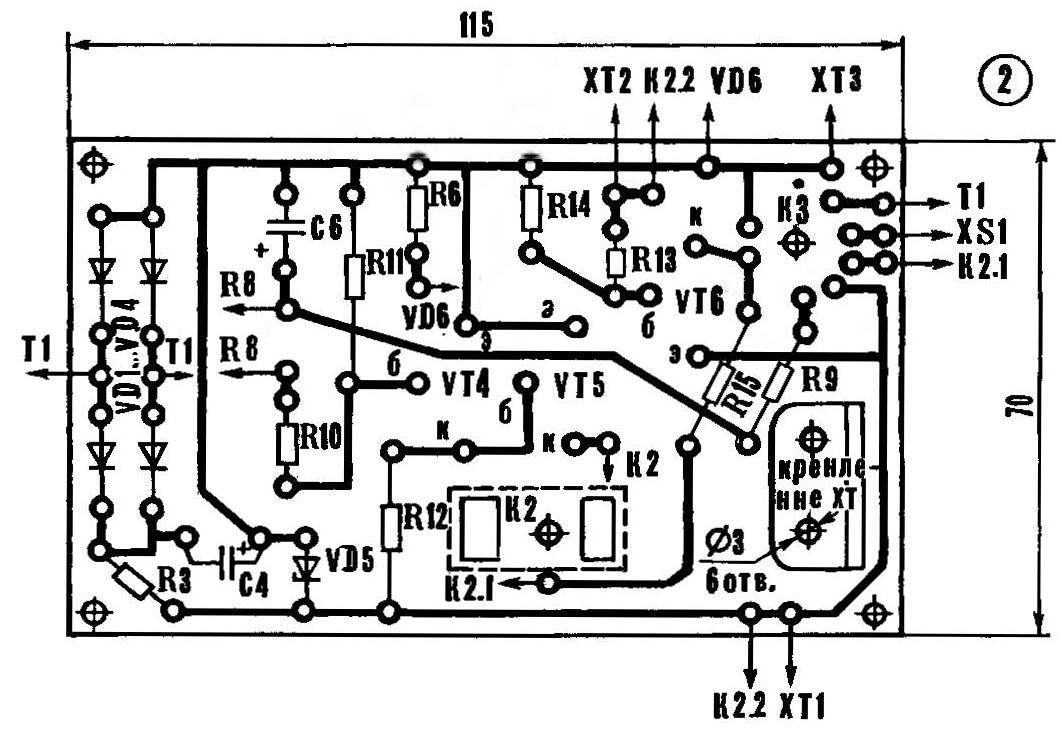 R and S. 2. One of the possible options for the production of printed circuit boards (with the placement of electronic components):
1 — capacitive relay 2 time relay, power supply, and the Executive relay. 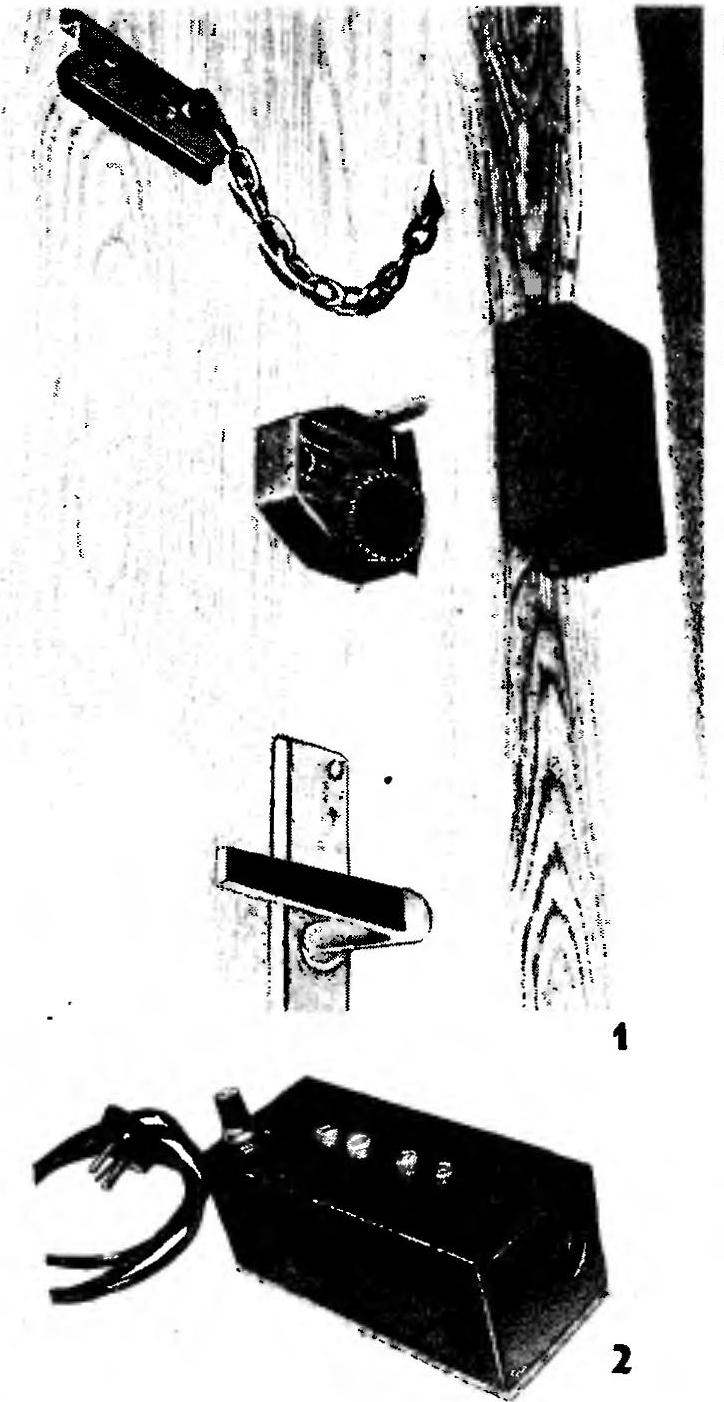 R and S. 3. Security the apartments will be reliable if it charge such that the electronic guard, made of two blocks:
1 — capacitive relay (mounted near lock), 2 — the main instrument (near the actuator) .
Coil L1 is wound on a paper frame with a diameter of 10 mm with a wire of PEL 0,35.
Turn to turn, in a single layer. The withdrawal made FROM, the sixth round of counting according to the scheme above.
…The transformer T1 is assembled on armor Core Ш20, the thickness set to 20 mm. Gurvica winding comprises turns 2750 .(Argument PEL of 0.1 mm. Secondary 180 turns of PEL of 0.45 mm.
All parts are placed on two printed circuit boards. Their sizes and position of elements depend on the types of the applied resistors, capacitors, etc. One of the possible options presented on R and S. 2. On the same Board mounted capacitive relay. On the other time relay, Executive relay and power supply. Two boards connected by a connector of any type, with at least 3 contacts.
Capacitive relay is placed on the door near the lock, and the rest (larger) part of the equipment in close proximity to the actuator.
Assembled without errors, the device starts to work immediately. The sensitivity of the capacitive relay is controlled by resistor R5. SB1 (type П2К) mounted hidden from the eyes of a stranger — after all, it engage and disengage alarm.
S. NADTOCHIY, Kharkov