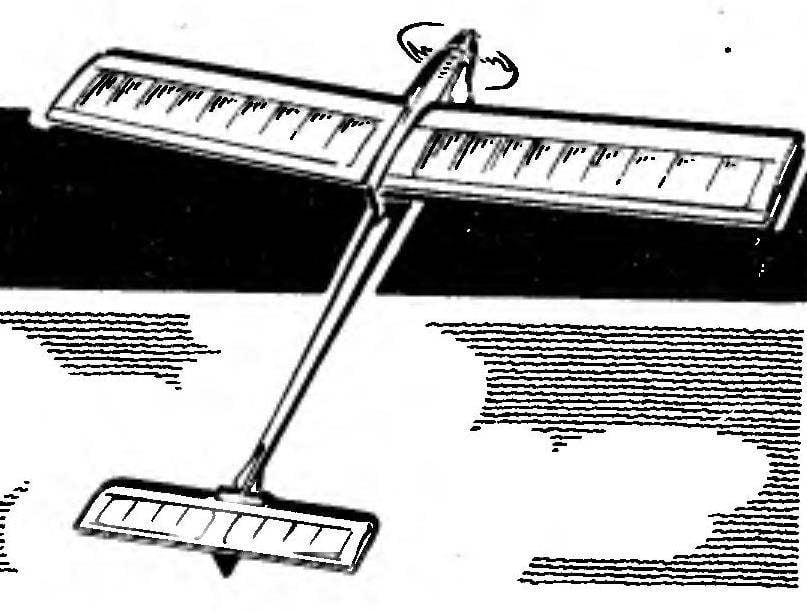 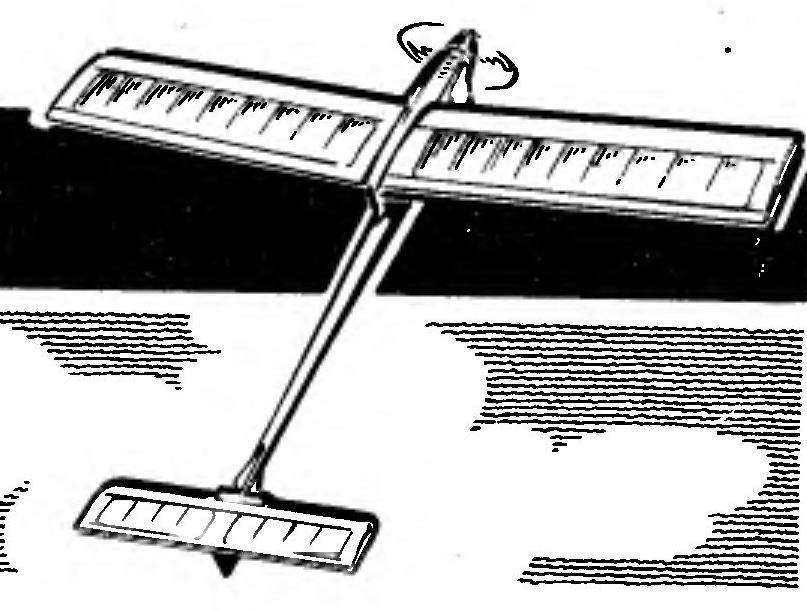 Timemay any flight models are, in fact, consists of two clearly differentiated stages. The first — motor climb. The main objective here is any means for a strictly limited time for a given mass model and power plant to raise timesnow for possible high altitude and to accelerate to maximum speed, allowing for a transitional land use kinetic energy for an extra lift transition point in the planning mode. The most logical way to achieve these requirements is the reduction of aerodynamic drag of the model in take-off configuration.

The second phase of flight — planning. Task is only one: to keep the model in the air max time. Typically, this is achieved in two ways (and implemented at the same time): the increase in elongation of the wing and use wing-bearing profiles expressed concave-convex type. Immediately it should be noted that experience has shown the incompatibility of the requirements of the two main phases of flight Tierney models, and all of the modern championship “tamirci” — in fact, the result of a compromise between two contradictions.
However, the compromise is a delicate matter, difficult… and not always grateful. The author of this project in 1976 was able to find a solution to get rid of design contradictions when creating a championship tie-dimensional. Unfortunately, a number of reasons forced him to retire from sports modeling, and he has failed to realize a very interesting idea Viva. But due to the high quality study of the relevance of the new designs is completely preserved to the present day. So I hope that the publication will interest fans of sports class of timed models and is useful to someone good idea. Note that the development fully complies with modern rules and requirements of technology of the timer.
The idea in variable wing geometry. At takeoff “ears”, the scope of which is exactly equal to the span centroplane parts on the hinges turn (before the start) down and lie on the lower surface of the wing. With a constant chord wing the result is a carrier plane with a dynamic, almost symmetrical profile with two times reduced the area! Since the competition rules allow the specific strain for time in the range of 20-50 g/dm2, and the remaining model parameters remain unchanged ADVICE to the MODELER, and with folded wings it meets the requirements.
After take-off “ears” in the transition phase reveals, and the model becomes an excellent glider with a high wing aspect ratio and with a strong support profile. It is useful to note that such wings can be greatly alleviated, tai as in contrast to gliders (where there are huge efforts of dynastart) here are only the net loads of planning. During the busy engine takeoff with proper fixation of the ends of the folded “ears” wing twice reduced amplitude (and, moreover, symmetric profile) is more than hard at all speeds. 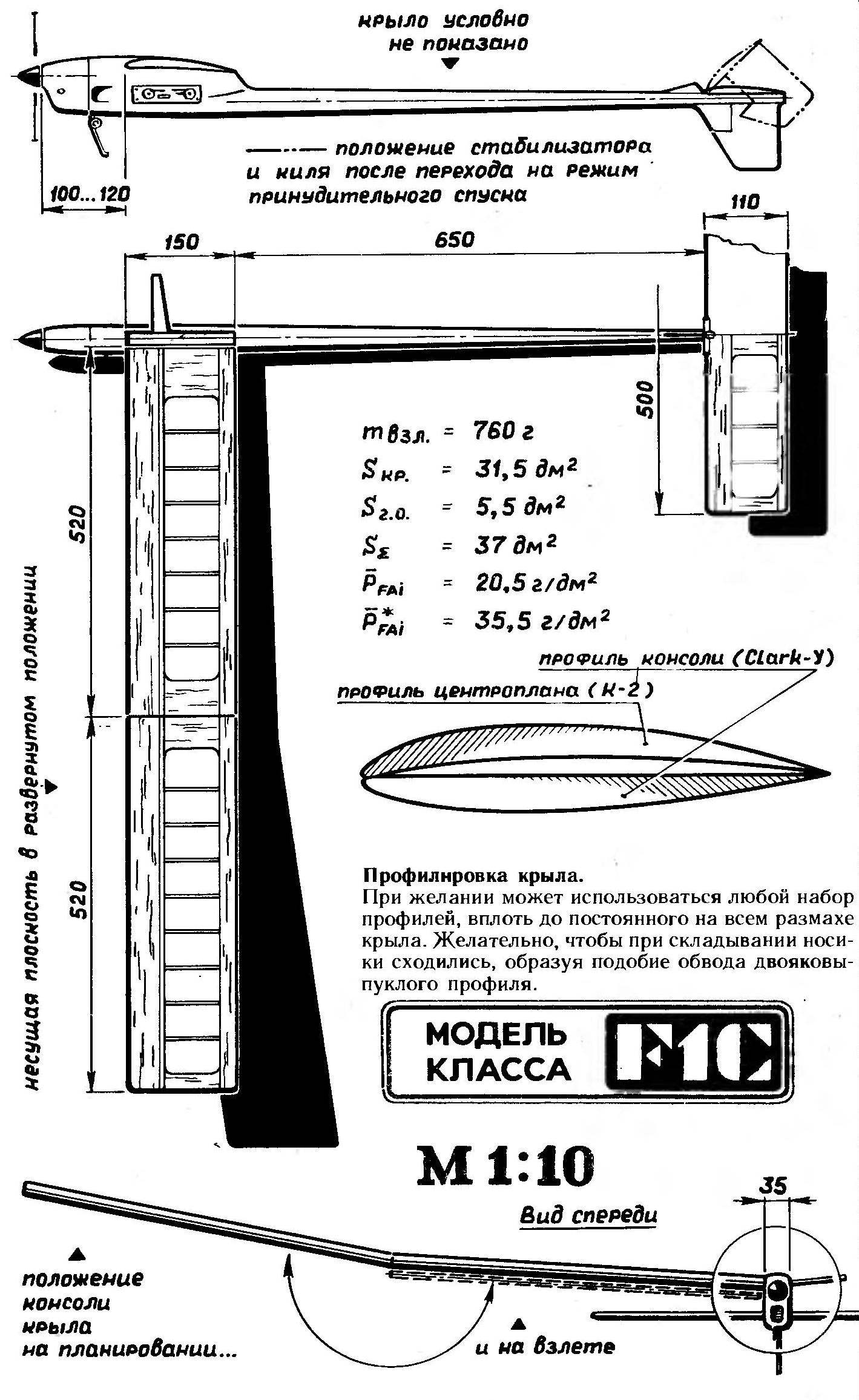 For the model of a new type is preferable to a high-thrust axis of the propeller. Therefore the engine installed in the fuselage down the head and to reduce midleware square cross section is mounted behind the rear wall when the staff cut the legs of the crankcase. Such placement of the engine and the axis of the propeller helps reduce the risk of zavalivanija model on take-off on “back”. Other components and parts timemay correspond to modern practice of the sport of aircraft modeling.
Model takes off almost vertically. After the cut-off of the engine and exhaustion of the kinetic energy of the stabilizer has not yet lost the vertical speed of the car for a short time is translated into a positive angle. Then triggers the release and disclosure of “ears”, and timer switches to planning mode. The mechanism of the machine may have a very different design and I think you don’t have to designer-modeller.
It is important to note one feature of the new scheme. The fact is that, when folded, wing twice the increase in efficiency of the stabilizer, and thus the focus of the model dramatically shifted back. For the required takeoff alignment, you must either provide a roaming mechanism, automatic balance weight in the fuselage (and excess weight, due to very light wing is very significant!), either have to be on the rise a shift of the entire wing forward relative to the fuselage (which is technically much more difficult). The last problem can be solved, for example, by introducing a small move on the slider of the pylon of the wing or suspension of the latter on “swinging” Acme lever suspension. If you are using such a suspension, the supporting plane at the transition Tierney configuration “planning” can take a position on the fuselage at a considerable height (if desired, this ie is used).
The development of the new scheme timemay associated with the search for the best parameters of a wing: first of all, the size of the extension and profile as the center section, and the “ears”. It is important to establish a mechanism for the disclosure of the wing, and quite possibly to ispolzovatj to perform this operation, and aerodynamic forces.
D. KARRYEV, Mary, Turkmenistan