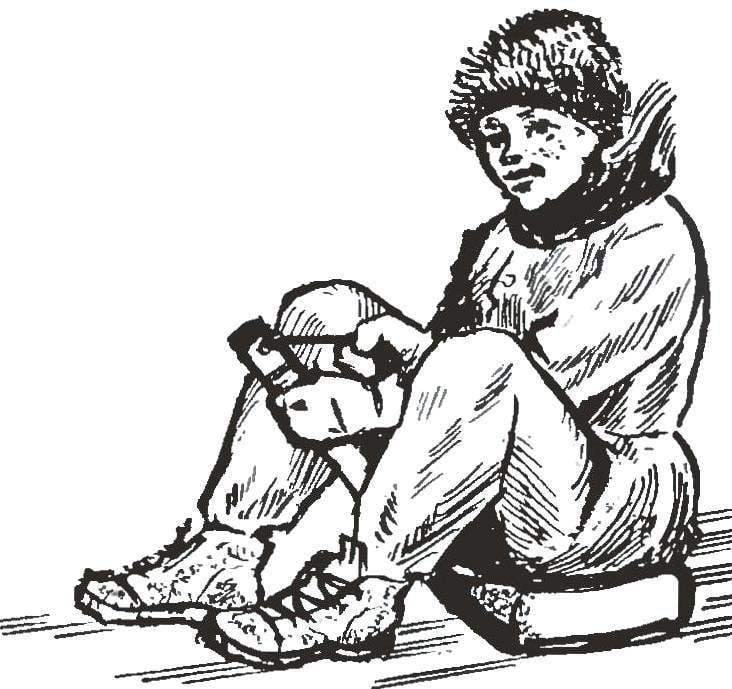 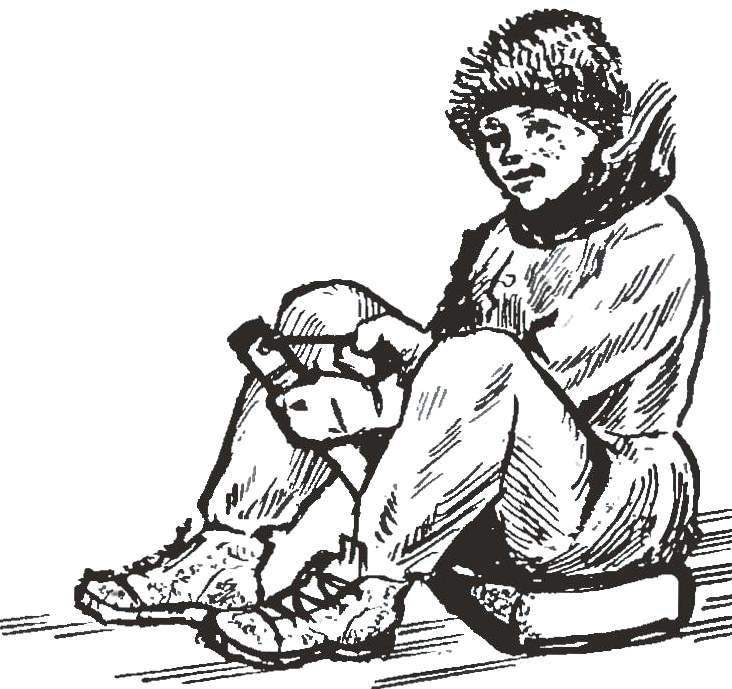 Coasting — a truly mass entertainment of children in winter since time immemorial. Fly down on the thumb ice track every trying on anything: who’s squatting, who flopping down flat, and who is placing himself fanerku or cover of the carton. Before that in the villages the kids were doing special sledges: I took the old strainer or pelvis, the outside is coated with clay or Adobe, poured water and frozen. Then inside the stacked hay as a nest. This kind of lens, the descent was rapid.
Despite the fact that the stores are now sold in a large range of modern plastic sledges, kids still make their own versions — so interesting and fun. Here are some examples from the German magazine “Praktik”.
Ledianka of spades …
Old shovel downright itself suggests to use it as saucers And indeed she already has everything: wide blade will serve as a great snake, the more that one edge, as if specially folded, as the sledge; and if you shorten the shaft — will have a handle, convenient to hang on to it and even to drive traffic. 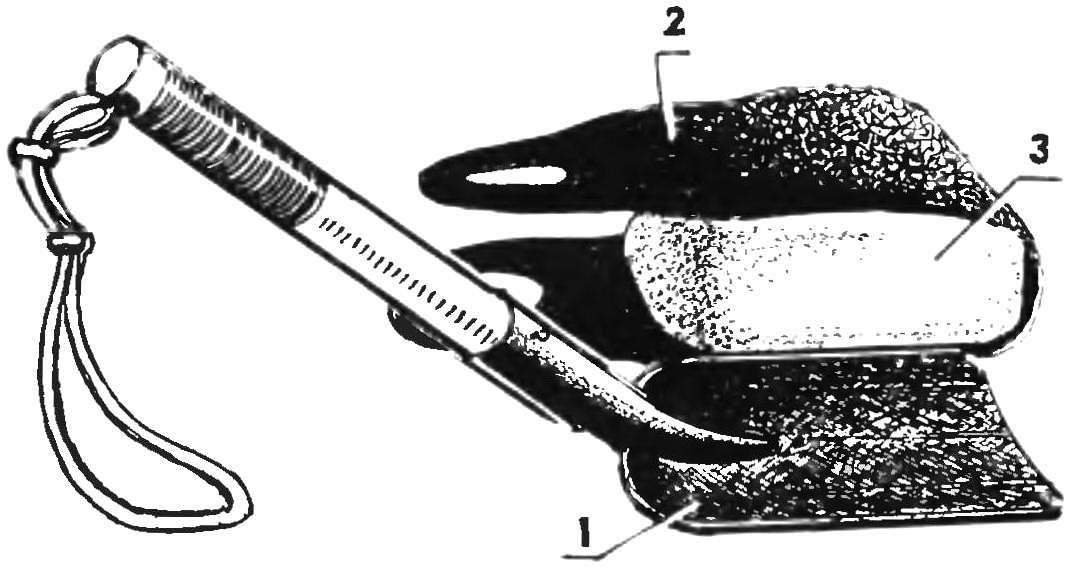 Fig. 1. “Soviet” ledianka:
1 — shovel; 2 — fabric (or rubber) tape-hinge; 3 — liner (foam, foam rubber, latex)
You can even slightly improve this “scoop” the ledianka is to make the seat. This would require a strip of fabric (or rubber — like inner tube): material is folded in half and specially done by the hole fits over the knob (handle). Remains to invest inside a piece of foam, thick foam rubber or latex — ready and comfortable padded seat.
“Ski” ledianka
Children’s wooden skis serve the child’s long winter or two, and then, suddenly, the baby grew — we need other, more. And the old — to throw away? Some of them make a sled. And if you collect a few pairs — can be built out of the disused ski original ledyanka
This romance must unite into a single shield. This can be done in the following way. Through available to each ski through hole for soft mounting is threaded tightly the incoming connection block on glue (carpenter’s, PVA). Side edges of the ski also glued, and the resulting shield is rallying firmly on a flat surface and is aged for a period of the adhesive. 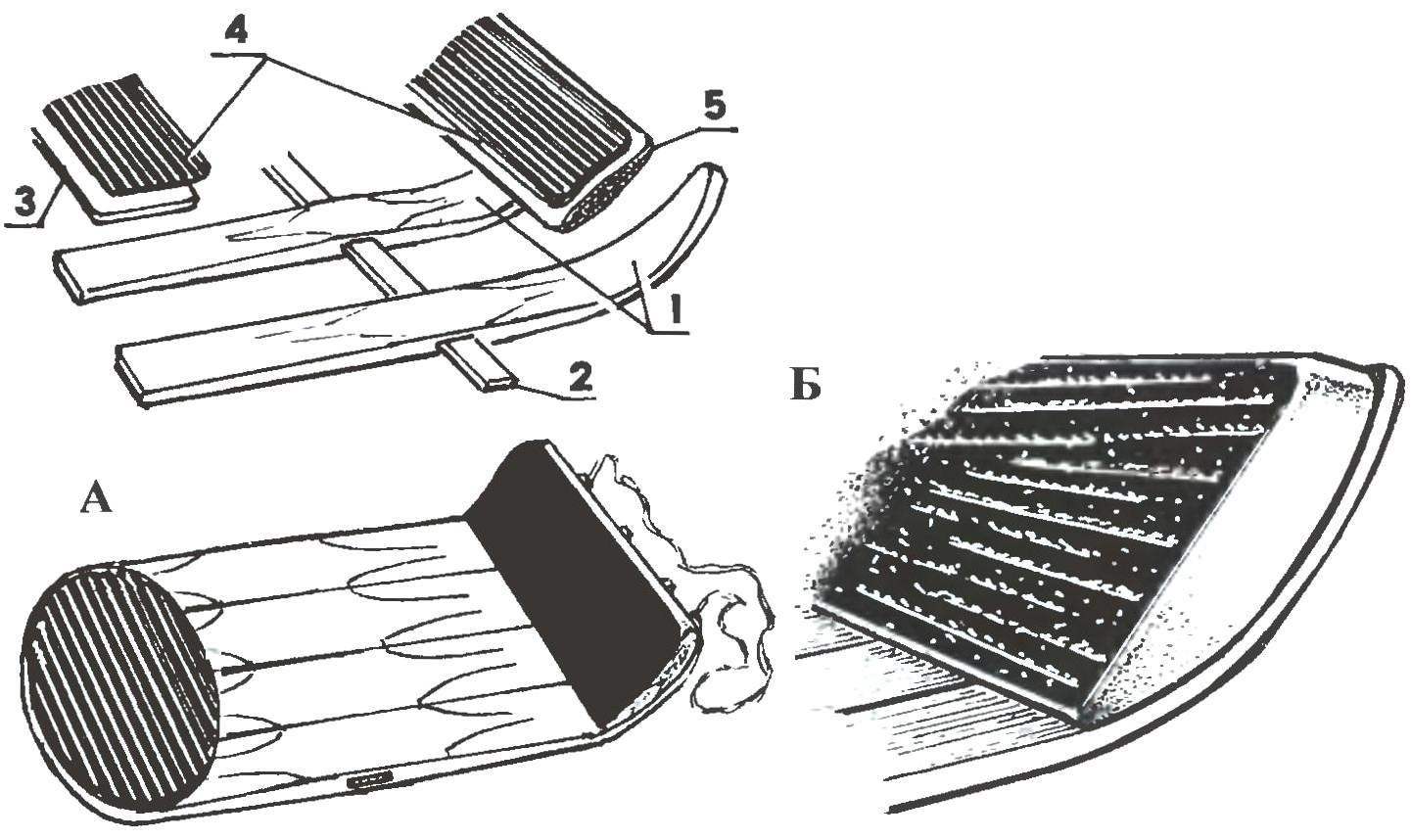 Fig. 2. Ledianka of skiing:
1 — romance; 2 — connecting bars; 3 — plywood panel seat; 4 — maximum; 5 — connecting rod A —ledianka section; B — Noskova part
At this time, is prepared and is adapted to bend socks ski connecting rod made of wooden boards; it gently prikolachivayte the toe of each ski.
To further strengthen the shield on the backs of ski is applied on top of and nailed a strip of plywood. It can be oval in shape and serve as a seat: then its surface is glued with carpet. A strip of the same material is pasted on noskovu the bar performing the function of the stop — the legs will never slip down. Here also for ease of carrying slides, you can attach a rope or leather handle.
Ledianka-chair
The increased “comfort” has another version of the slides in a chair on the wide Shoe. This design incorporates both “Soviet” and “ski” options. Only the shovel is used only the part with the stalk as a handle, and instead of skiing — sheet of plywood. 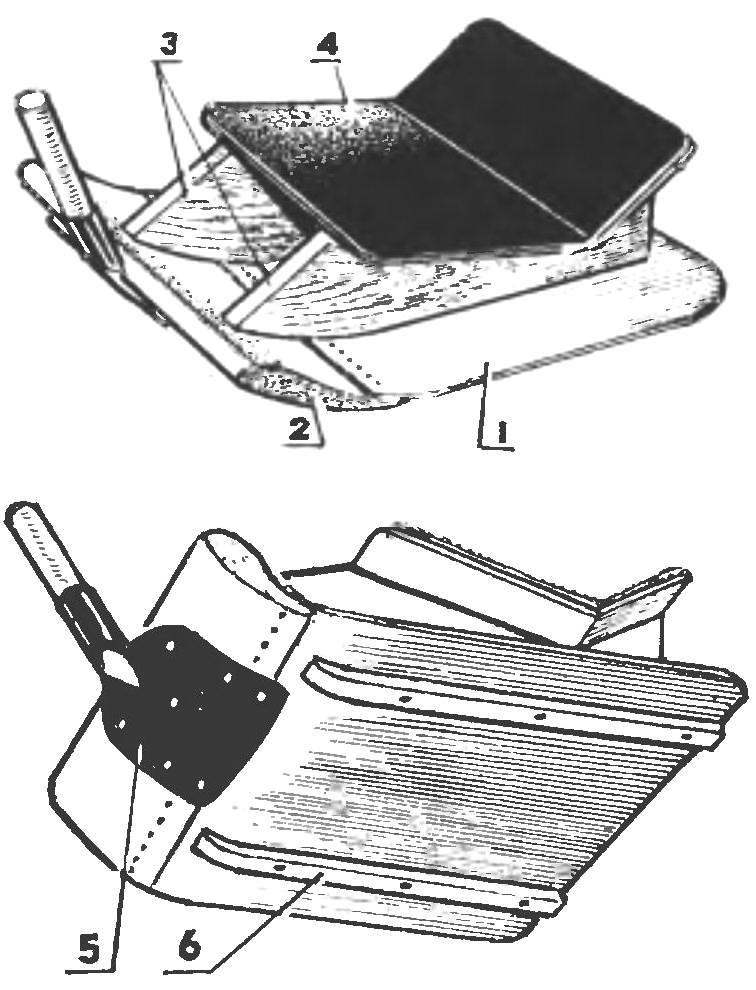 Fig. 3. Ledianka-chair:
1 — plywood skids; 2 — moskowy notched bar; 3 — legs of the seat; 4 — seat cover (rubber, carpet); 5 — part shovel with handle; 6 — bars-undercuts
The device of the saucers is clear from the figure. Plywood sheet-Poloz its front edge lapped is mounted on top to Noskova bars, processed a plane under the sleigh bend. Their connection strengthened nailed on top of the notched legs of the seat. The latter is formed by two panels connected at a certain angle, for which the legs have corresponding cutouts. The seat surface upholstered or covered with rubber ribbed Mat or carpet.
Runner to the plywood bottom nailed two pieces of wood, playing the role of undercuts. Laskovogo bottom of the bar is attached to part of shovel with handle, to be able to keep riding on ledyanka.