You love music, but not always have enough time and opportunity to go to the Opera or attend a concert. However, modern high-quality instrument sound allows you to “go” at the concert of your favorite artist and comfort of your own home. But before you buy such equipment, you need to know what requirements it must meet.
The Central link of the stereo complex — a stereo amplifier (see “M-K” No. 4, 1975). I will start our story.
What should be the high-quality ULF? Paradoxically, answering this question directly is impossible. Indeed, increasing demands on equipment are high-quality playback make to constantly improve the performance of amplifiers: improved old patterns, learn new elements. Firmly we can only talk about the minimum requirements to include the ULF to the class of high quality. These requirements are confirmed by many experts.
AUDIO FREQUENCY RESPONSE
Will not be superfluous to remind you that a professional musician can hear sounds with frequencies from approximately 25 Hz to 16 kHz. What makes the designers of the instrument to extend this range to the range of 10 Hz — 100 kHz? After all, there are now even amplifiers with a bandwidth from 5 Hz to 250 kHz! The fact that the real signal is always present overtones which are the result of the addition or subtraction of the main signal and its harmonics. To reproduce these overtones that give the sound its naturalness, and extend frequency response. This amp can cover a loop of deep negative feedback, which, in turn, is one of the most radical means of reducing nonlinear distortion.
However, it is necessary to warn Amateurs from the desire to over-extend the bandwidth frequency of the amplifier. The designers of Western companies producing high quality equipment, recognized that the widening of the band below 20 Hz and above 25-30 kHz does not make much sense and has almost no effect on the subjective assessment of the quality of work ULF. Only for PR reasons, they unnecessarily inflate the number of characteristics. In addition, the extension of the frequency range beyond the specified value the event is technically difficult and very expensive. With self-developing ULF’s always necessary to take into account.
DISTORTION
At first glance, this option does not require special explanations: the less distortion the better. And indeed it is.
The designer is important to know what distortion is acceptable for high-quality ULF, and at what cost he will have to face in order to reduce them.
Perhaps the most important nonlinear distortion. A musician, for example, is capable of a clean tone to notice harmonic distortion greater than 1 %. We emphasize on a clean tone, but a real signal is always “decorated” by the overtones. In this form, even a well-trained ear specialist would barely register on the distortion at least 2-2,5%.

On the other hand, to achieve the level of nonlinear distortions less than 1% is not as easy as it might seem at first glance. This is especially true of amplifiers with transistors. Declared some foreign firms the figures are 0.05% or even 0.01% for particularly high-quality ULF is more of a tribute to advertising. And circuit design of these amplifiers is not economically justified.
Another type of distortion is intermodulation, or as they are otherwise called, cross. These distortions occur in the terminal stages with reactive elements, such as the output transformer, resulting from the addition or subtraction of different frequencies. In transistor ULF intermodulation distortion is almost none.
Frequency distortions associated with uneven amplification of different frequencies. Most often it is a blockage (rarely climbing), bounding frequencies.
Uneven amplification should not exceed a certain, pre-specified limits. The vast majority of stereo ULF she is ±1,5—2 dB (voltage).
OUTPUT POWER
For domestic high-quality equipment experts call power from 5 to 500 watts. And almost choose the booster should be based on conditions: what is the minimum capacity can provide high quality playback in a particular room.
But first a few words about how to measure the power output of the amplifiers. This can be done in three ways.
First determine the sinusoidal power at constant voltage and total harmonic distortion less than 1%. In this mode, the amplifier must run for at least 10 minutes (hence the name: method of evaluation continuous power).
The second method proposed by the IHF Institute (USA), is to measure the maximum possible undistorted power fed to the input of the amplifier is not a single sinusoidal signal with a duration of 1-2 MS. (Supply voltage should not be changed.) This power is called “music”.
According to experts, who suggested this method, it allows to assess the ability of the amplifier to reproduce without distortion the short musical passages and exceeding the value of its own sinusoidal power.
However, the situation is doubtful. So, the duration of the musical passages of works for organ (for example, Toccata and Fugue by Bach), and particularly for electrical musical instruments, often up to several seconds. Of course, if these passages have a magnitude close or equal musical power amp, they are reproduced with great distortion.
A third method determines the maximum power at which total harmonic distortion does not exceed specified, and the voltage of the power source may differ from face value. This power is called peak. I think that it may exceed a sinusoidal 50-100%. The results obtained by the latter method, do not provide sufficient insight into the quality of the amplifier.
Thus, the most objectively evaluate the amplifier in setting the output power allows the first method.
It is impossible to talk about the power play, not knowing the efficiency of the speaker system.
Usually, the values of output capacities called for loudspeakers with an efficiency of 3-5%.

There is a perception that amplifier with an output power of 100 watts sounds 10 times louder than watt amplifier. In fact it is not. The sensitivity of the human ear to sound is nonlinear. For example, one barely detects the difference between the sound sources with a power of 50 watts and 25 watts.
Nevertheless, the difference in the quality of the amplifiers 50 and 25 W is. In the first case it is perceived as high naturalness, the “pleasantness” of sound. Reason? Less non-linear distortion at low frequencies, a larger dynamic range.
Required amplifier power depends on the volume and the acoustic properties of the room in which the speakers are installed. For example, a living room with volume 70-80 m3 it ranges from 20-25 watts 80-100 watts depending on the acoustic design of the room.
There are three kinds of premises. With the “live acoustics” room, which has no upholstered furniture, no curtains, carpets, floor paved. For such a room volume of 60 m3 has enough power to 15-20 watts.
In areas with “medium acoustic” a little soft furniture, light curtains. For scoring you will need a power of 30-40 watts.
Of the room with “dead acoustics” have a lot of upholstered furniture, thick curtains, carpets on the floor and walls. In this case, the necessary power of 50-60 watts.
If the volume of space doubles, respectively, and increased amplifier power output.
In conclusion, reiterate; high power ULF is not meant to stun the listener, and for a natural playback of the program on a small volume.
NOISE. DYNAMIC RANGE
Agree — it is frustrating when in the pause between pieces of music, beautifully reproduced by the apparatus from the speakers is heard a hissing sound, a ragged, haunting, annoying. This is a “noisy” amplifier.
The noise of the amplifier are determined primarily by the active elements (electron tubes, transistors) of the input cascades. If you compare noise at ULF on lamps and transistors, under equal conditions, the first is still superior in most transistor. And only by a circuit of the complications, application of new active elements such as field-effect transistors, and achieve high results. Naturally, the cost of such amplifiers is large.
Noise level ULF affects its dynamic range (measured in decibels). According to this indicator, judge whether the amplifier used in the system of high-quality sound reinforcement.
Evaluate dynamic range as the ratio of the maximum power of the useful signal given the nonlinear distortions and the power of the intrinsic noise of the amplifier.
THE DAMPING FACTOR
You can often hear “a Good system, but “low” sounds like “barrel” or “mumbling” what’s the matter?
The diffuser of a speaker (emitter), together with the suspension and voice coil represents an oscillatory system with a certain decay time. If after with the voice coil removed stimulating impulse diffuser long to “calm down”, the speaker starts to sound like “drums”.
To shorten the decay time of the diffuser, the speaker is providing only weak. In particular, its voice coil shunt output resistance of the ULF. Naturally, the lower, the better the damping. Its value is estimated coefficient, or damping factor. From the best examples of tube amps it reaches 20— 30, transistor 100 and more.
NONCOMPENSABLE VOLUME CONTROL
It would seem that the auditory system of man is sophisticated enough and there is no need to help him. But that’s not quite true. The sensitivity of the human ear depends on the frequency, especially at low volume levels. The smaller the volume, the worse it perceive lower and higher frequencies. And if the volume control is ULF has no artificial compensation on lower and higher frequencies, creates a false impression of blockage of these frequencies at lower volume levels.
Therefore, regulators with tone-compensation simultaneously with the change of volume changes and their frequency response in accordance with the so-called curves of equal loudness (they are listed in the references). If the actual performance of the controller differ from the ideal by 7-10%, it is assumed that the regulator is correctly designed.
TONE CONTROL
How often, listening to music, we say, “Good idea, “high more” or “Add to “low”…” thus we ask to change the timbre of an instrument: to make it pleasant for us, or more natural. Indeed, a simple turn of the handles, we change in a certain range of the sound system.
But sometimes this fails to achieve, in our view, the sound to understand this question, you have to imagine how to apply the tone controls. First of all how many should there be? It is now widely accepted — at least two: at low and high frequencies. 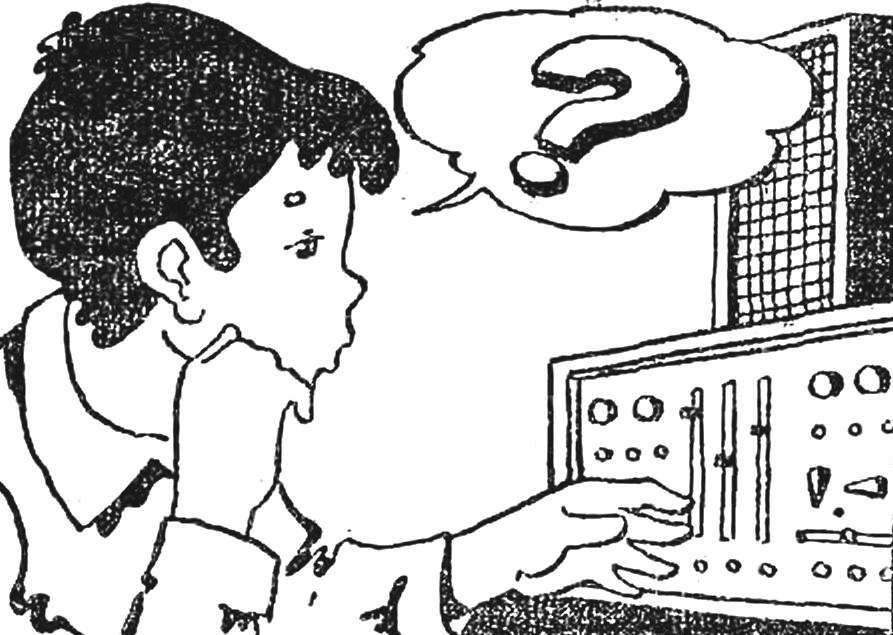