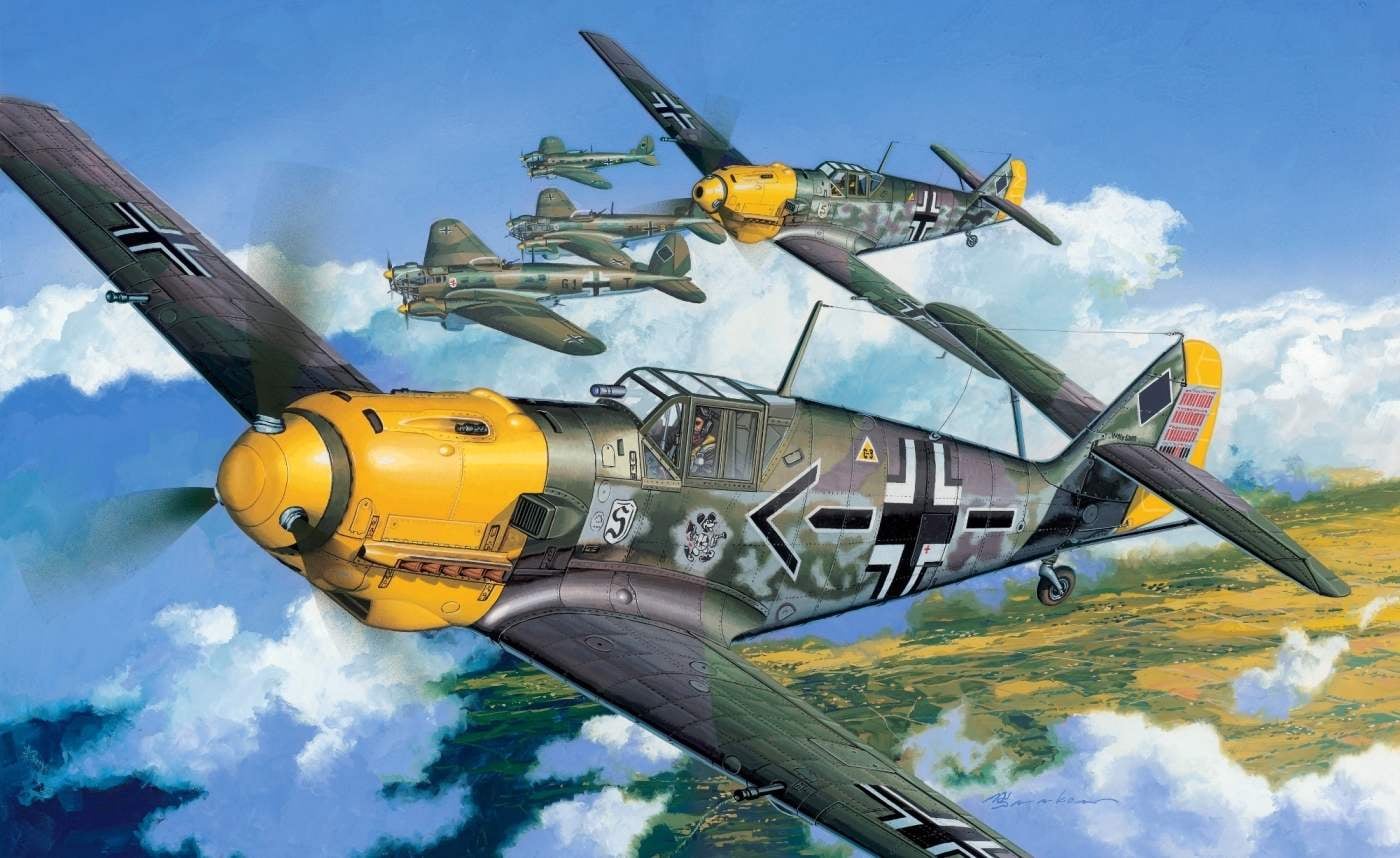 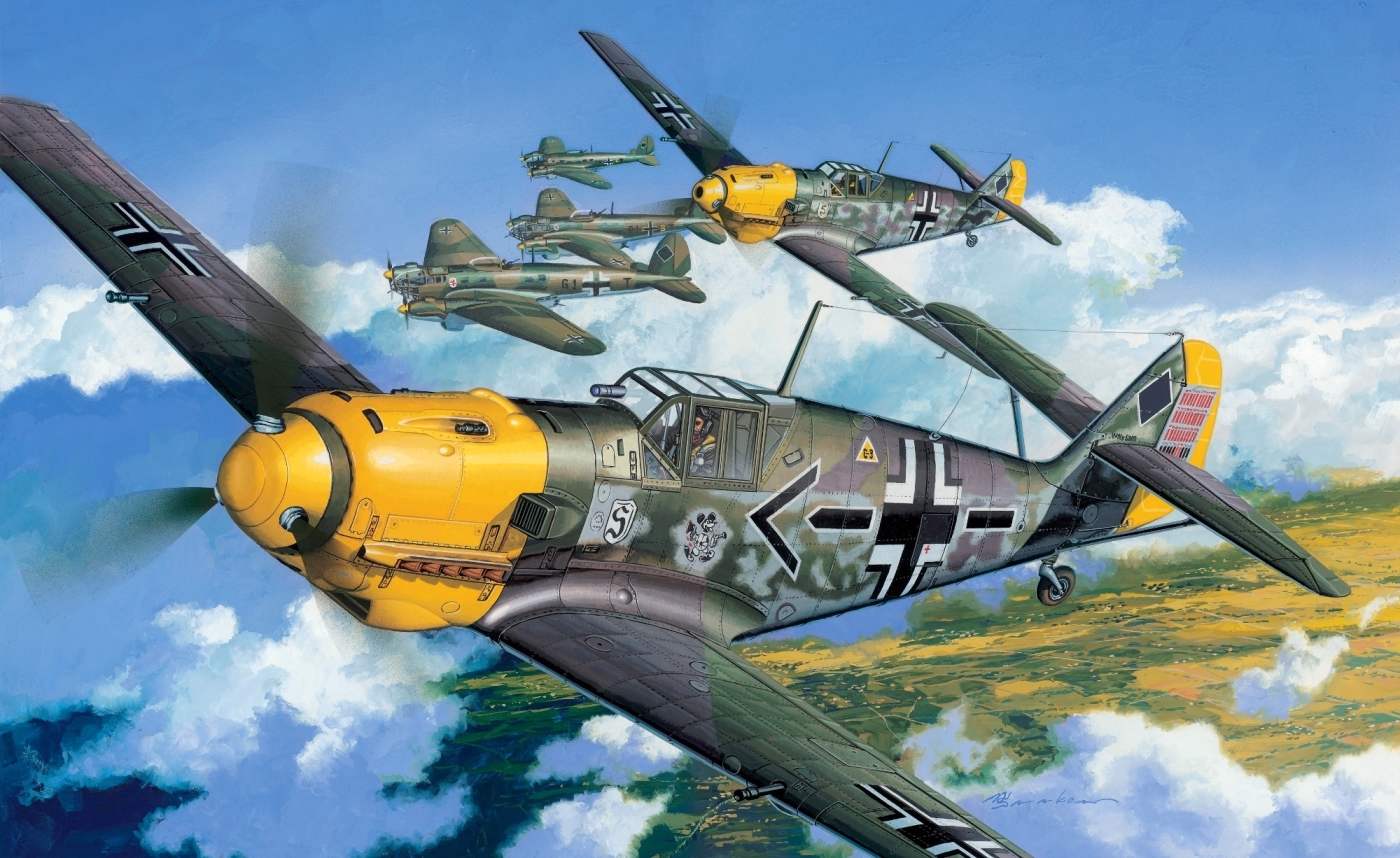 Fighter Messerschmitt BF-109 first modifications. The Treaty of Versailles in 1919, signifying the end of the first world war, significantly limit the military potential of Germany. The Germans were allowed only to have a 100-strong land army, devoid of all heavy military equipment, but German industry was forbidden to carry offensive weapons.

However, in may 1922, the ban on restrictions in the sphere of development of civil aviation Germany has been removed, which gave impetus to the revival of its aviation industry. There are many new airline companies, among whom was the firm Bayerische Flugzeugwerke AG (Bavarian aircraft factories) — BFW, which cooperated with 25-year-old designer Willy Messerschmitt. The Germans, however, were allowed to build only light aircraft, but the absence of a prohibition on placing orders outside of Germany allowed them to produce larger machines that are close to the bombers class.
Such a miscalculation of the allies gave the Germans the opportunity to begin the revival of the German air force. The first stage of this process was the creation of a network of aviation schools and the involvement of youth in aviation activities. Then began the development of modern combat aircraft that were issued for sports or passenger car.
After coming to power of Hitler in January 1933 began a large-scale construction of the air force, which it was impossible long to keep secret. Next year, Germany officially announced the formation of the first fighter squadron in Döberitz. However, the part is officially called Reklame-Staffel Mitteldeutschland, that is “Advertising squadron”, but it only emphasized her assigned task — to promote the emerging aviation power of Germany.
The first production combat aircraft such as, for example, fighter-biplanes are Not-51 — began to arrive in the order of the Ministry of aviation in the beginning of 1935. This allowed Hitler on 1 March 1935 officially announced the creation of the German air force, which was a clear violation of the Versailles Treaty.
In 1933, when Hitler came to power, firm BFW was in a very difficult financial situation, surviving on small orders. However, two years later, the situation began to improve, and in 1935 the company received a huge order for the production of 90 aircraft AG.66, 115 — 145, 70 — No-45, 35 — Ne-50 and 32 — Bf-108.
Bf-108, designed by W. Messerschmitt, was a monoplane and was considered a multi-sport aircraft. In the summer of 1934 on the basis of this machine for the Ministry of aviation began development of a new high-speed fighter. The same order was given and the eminent German firms Неinкеl, Aгado and Fоске-Wulf. The prototype of these companies had to go through comparative trials in travemünde.
The concept of the new fighter V. Messerschmitt made the most of the experience in the development of quadruple Bf-108. In particular, the new aircraft had the same slotted slats and flaps, and a fully closed canopy pilot. But Parking angle V. Messerschmitt chose for the fighter, more than a sports Bf-108, — smaller take off distance was for the fighter option is more important than some deterioration of visibility from the cockpit during takeoff and landing. For aircraft, the planned new engine Junkers Jumo-210 with a capacity of 610 HP, however, the firm failed to deliver it by the due date and on the first copy of the fighter BM09V-1 with serial number 758 in September 1935 had to install the English 695-horsepower Rolls-Royce “Kestrel” V. 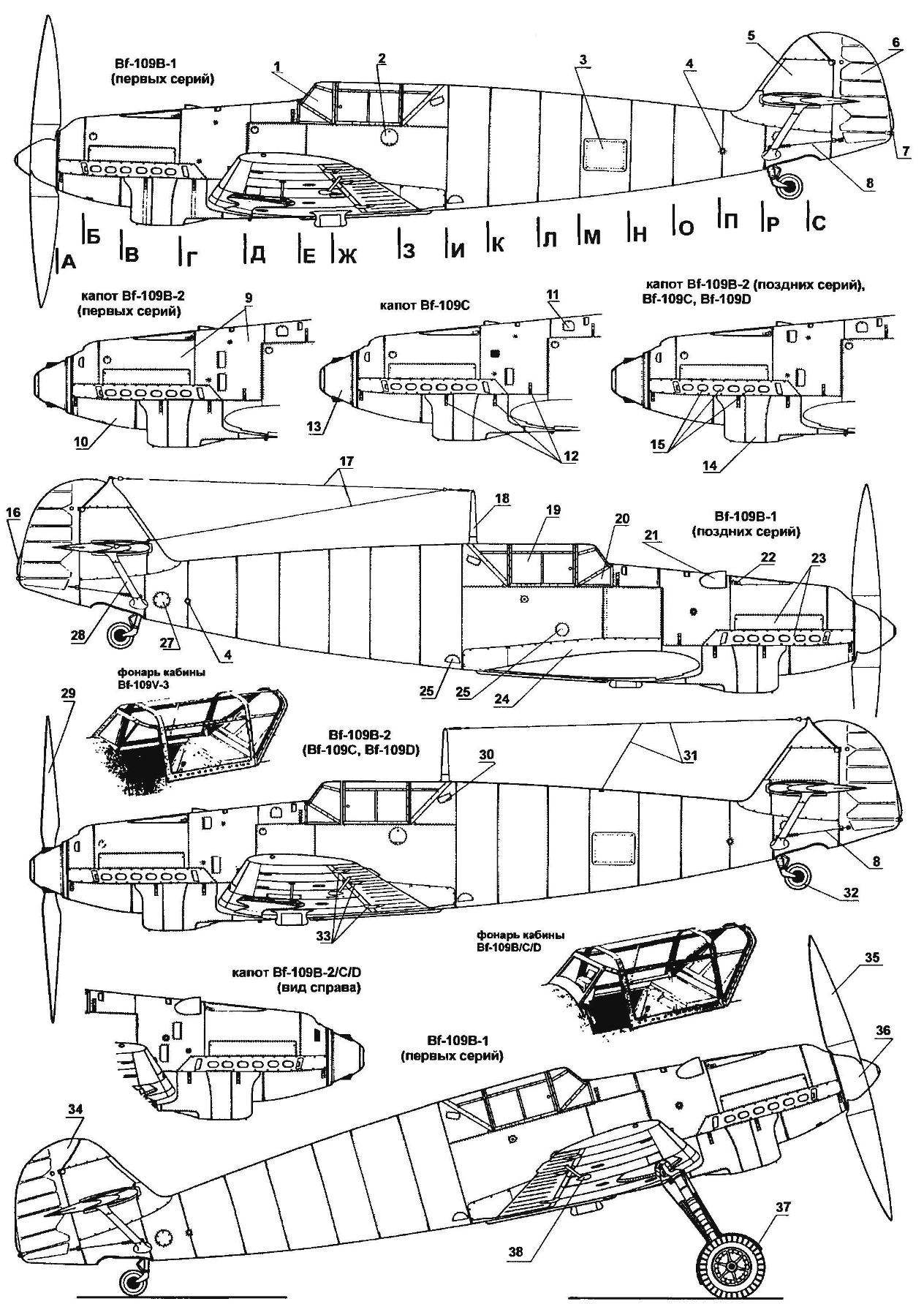 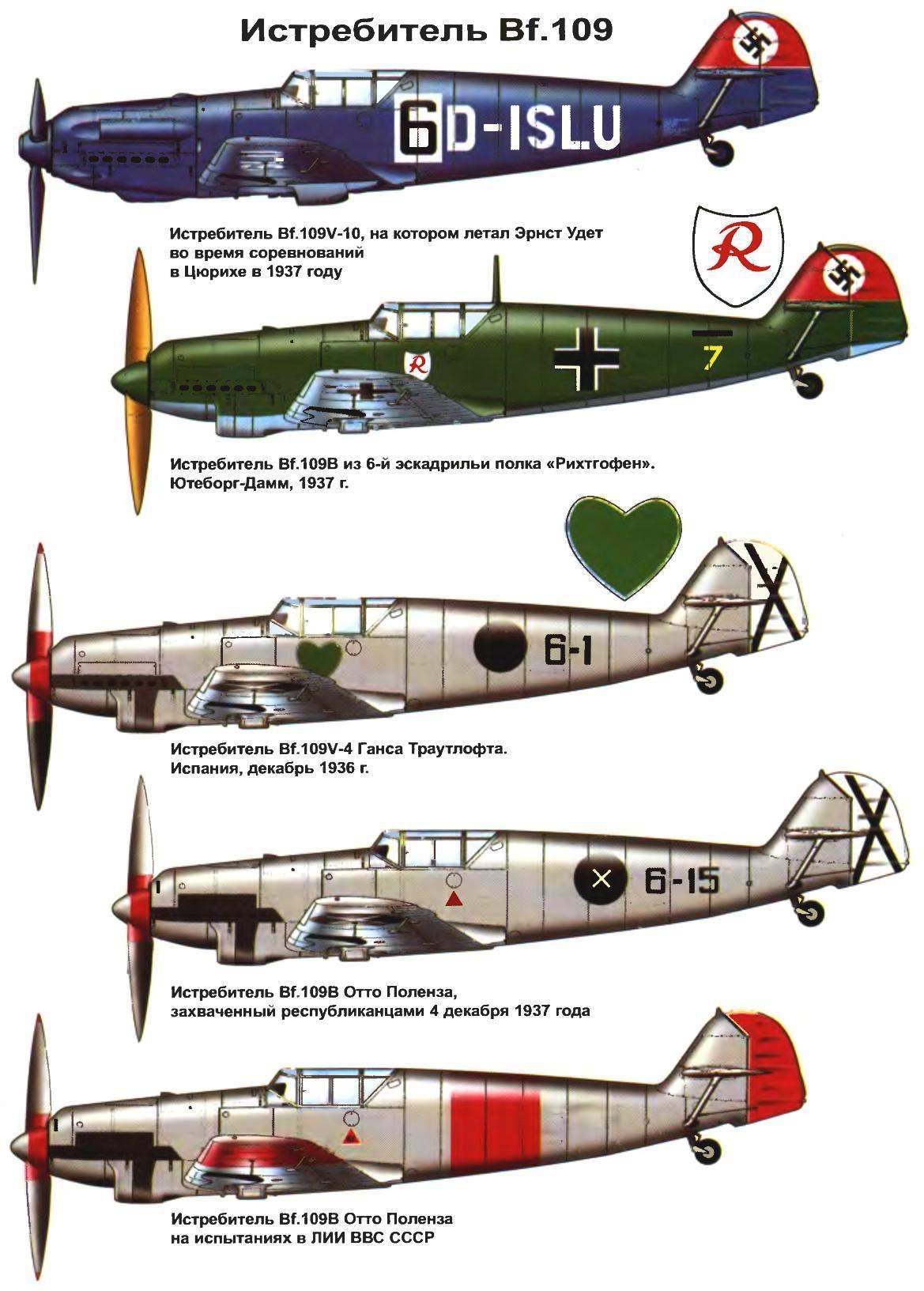 In the autumn of 1937 received an order for a series of planes with a 12-cylinder DB-600A. The aircraft was assigned the designation Bf-109D-0. The main external difference between the new modification was the replacement of the wooden screw of the metal pitch, which is produced in Germany under license and has already been installed on the BF-109B-2. The aircraft of this modification had better characteristics than previous versions. It was seriously strengthened its armament — two synchronized machine guns were added to 20-mm cannon MG FF/M ammo-160 rounds, combined with the engine into a single structure; the barrel of a gun was located in the hollow shaft of the screw.
On the modification of D-1 from the gun had to be abandoned because it was not too reliable. The vacated space was used to increase the ammunition of machine guns 1000 rounds each. Option D-2 were produced with two additional wing guns. The increased aircraft weight adversely affected its maneuverability — in particular, slightly increased the radius of the bend. Another unpleasant feature was the increase in stall speed.
Changes in alignment after the installation of the heavier engine was offset adjustable stabilizer angle relative to its neutral position can be varied from +3 to – 8 degrees. However, the mechanism of the stabilizer control was unreliable and frequently refused in flight when exposed to large overloads, especially at the exit from the dive. In all there were about 200 fighters Bf-109D with engines DB-600.
In late 1940, the aircraft began to retire. The most radical modification of the Bf-109 period of the Spanish war was the fighter of the series “E”. It was an airplane cleaner in aerodynamic respect. Large radiator liquid cooling system of the engine in the nose of the car lost his seat a little cooler, for cooling the engine used two small radiator, located in Palautordera position under the wing.
The design of the wing of Bf-109E has been strengthened. Good maneuverability was provided by a high wing loading and a powerful engine. On a new modification set engine DB-601 power 986 HP, geometrical and connection dimensions of which coincide with the size of the DB-600. Is the carb on the DB-601 was used direct injection of fuel into the cylinders, increasing the compression ratio in the cylinders of the engine from 6.5 to 6.9. Was also strengthened supercharged, and the supercharger equipped with an automatic control system of pressurization with hydraulic drive. The air intake of the supercharger brought over the exhaust pipes on the left side. The capacity of the fuselage fuel tank was brought to 400 l. the Engine spun a three-blade metal propeller to be modified electrically step.
The cabin of the new model was a close as the first Bf-109, with a closed review back and poor forward visibility on landing. Chassis with a narrow track often led to accidents on the ground when you run and run. Like all the previous Bf-109, the machine tended to crash during the run on the left wing. Pilots have complained that they can not control the trim tabs from the cockpit (the trimmers were unbent on earth) and, as a consequence, to control the plane had to make quite a big effort.
Specifications of fighters Bf-109 first modifications 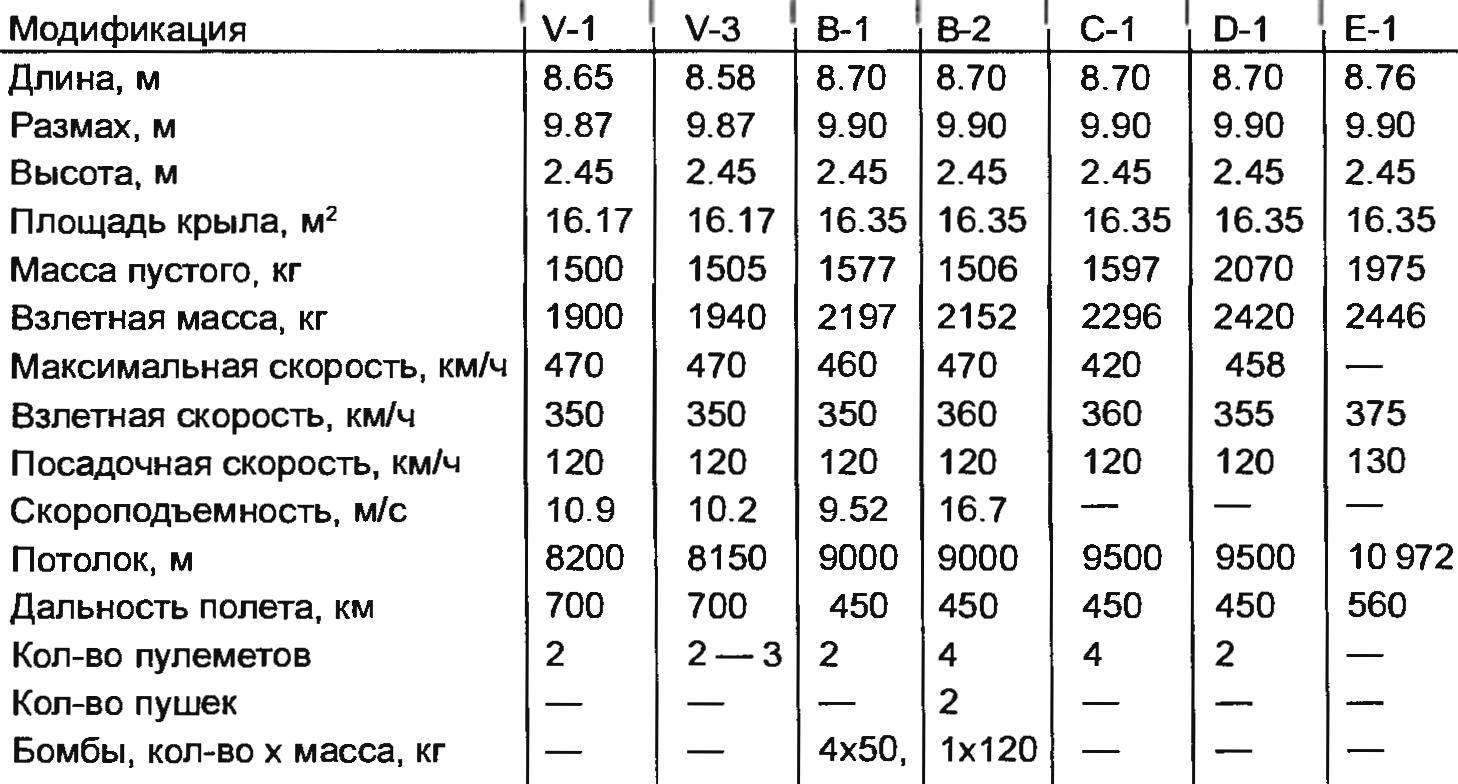 In a dogfight the plane behaved steadily and was quite maneuverable for a monoplane. At low speeds approaching stall speed started light buffeting. The release of the flaps, and pushes the critical speed by 20-25 km/h.
Ten pre-production Bf-109E-0 armed with two wing and two synchronized machine guns, was built at the end of 1938 . On the first series of the BF-109E-1 instead of wing machine guns mounted two guns MG FF ammunition of 60 shells per gun. Now the pilot could water the enemy lead with a speed of 132 kg/min there was a possibility of a suspension plane four 50-kg bombs or one caliber 250 kg.
Fifteen first BF-109E-1 was in Spain in the late spring of 1939, when a civil war is almost over.
N. Food reserve was, A. CHECHIN
(To be continued)