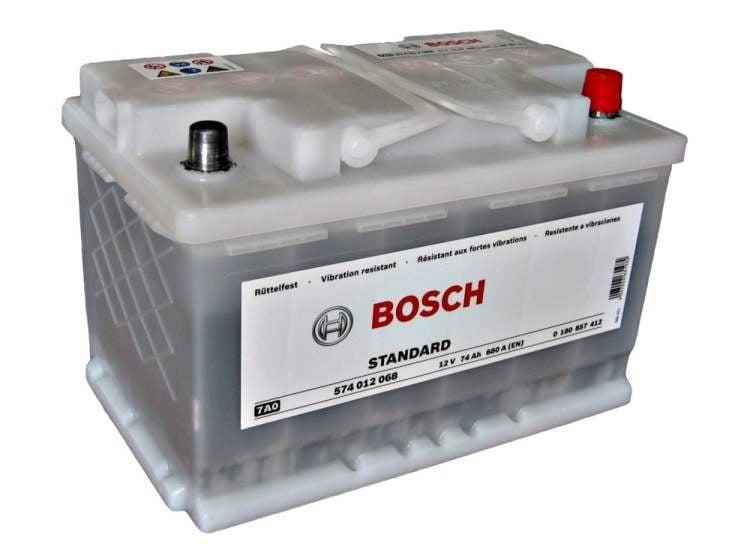 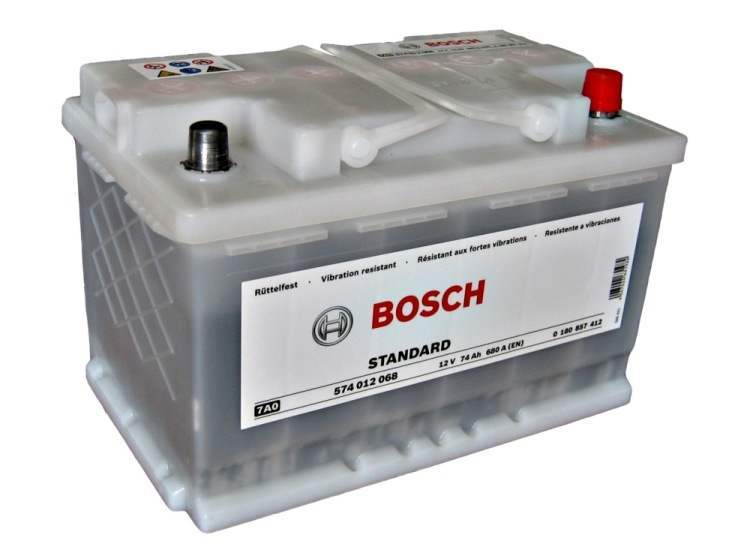 In the journal “modelist-Konstruktor” No. 10 for the year 1985 was published a description of the electronic disconnect switch (VMS) for the battery (AB) of the vehicle. The originality and simplicity of the scheme I liked. Of course, I used it on my car. And creatively. The result is a design which, unlike the prototype, allows you to successfully use e-VM even when the on-Board network contingencies of a short circuit. In addition, my design provides for the on indicator. But this added convenience.

As can be seen from the simplified (Fig. 1A) and complete (Fig. 1B) is a circuit diagram of an improved electronic VM me, on and off the device the two buttons. The operation of the device (and the entire onboard system in General) has become more reliable thanks to the built-in filter protects the equipment against high-voltage interference, which the generator and the ignition system, that is, do not skimp.

The filter is assembled on the two capacitors C1, C2 and Zener diode VD1. First dampen the ripple voltage of the rectifier of the generator, while the semiconductor VD1 (voltage stabilization 18) eliminates surges occurring in the vehicle electrical system when the ignition system and electric motors. The purpose of the capacitors Sz—C5 — quenching arcing of relay contacts and push-button switches. Diode VDЗ also serves to clear the button operation SV2 and remove the “chattering” of the relay contacts K1, the resulting self-induced EMF in its coil.

VS1 and VD2 on the collected power of the device. Through the diode VD2 occurs, the whole charge current, and a thyristor VS1 — discharge current of the battery. By clicking on the SV1 relay K1 and contacts K1.2 translates itself into the lock. At the same time closed contacts K1.1, causing the opening of the thyristor VS2. He, in turn, enables more powerful VS1. Opening that connects to the body of the car battery, what immediately starts signaling led НL1. 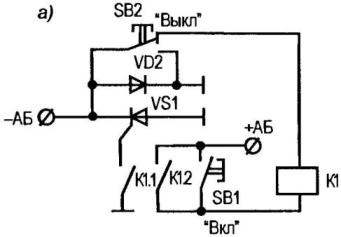 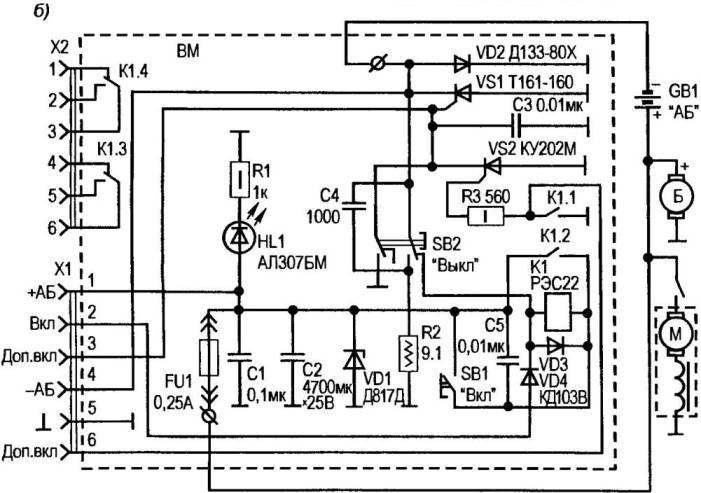 Fig. 1. Simplified (a) full and (b) a circuit diagram of the electronic disconnect switch

By clicking on the button SV2 relay coil K1 is de-energized and its contacts open. At the same time closed the anodes and cathodes of the thyristors, which causes involuntary closing.

In establishing the device does not need. But it is possible that the “weight” of the car will not turn off. Then you have to reduce the resistance of the resistor R2 to the 2-6 Ohm, and might even need to swap contact group button SV2.

To detail the device is not critical. Instead of the thyristor VS1 type Т161-160 can be applied equally powerful counterpart, designed for a maximum direct current of at least 160 A and reverse voltage of 200 V. as VD2, you can use any diode with a current of 35 A or more when Uобр. > 200 V. in addition, it is necessary that the semiconductor cathode of this valve was connected to the hull. Diodes КД103В shown on the circuit diagram (VD3, VD4), can be replaced by Д226А (Д226Б, Д226В or Д226Г). Instead of the Zener diode Д817Д accept any other East from 16 to 20 and In ICT.max of at least 400 mA.

Resistor R2 should be of wire, and RZ is designed for a power dissipation of 1-2 watts. As K1 will fit any relays with four groups of switch contacts 9 to 11 In and able to keep them when the voltage drops to 5.6 V.

When installing the reed switch with normally open contacts instead of buttons SV1 VM can be used as anti-theft device. Ground to enabled by using a permanent magnet brought into the desired place in the body of the car. Note that clicking SV2 switching off the device shortly as the resistor (R2 desktop.

Appropriate (in cars) to build the VM in two buildings. In one located near the battery under the hood, placed the power of the device, and the interference filter (i.e., VS1, VD2, C1, C2, VD1, VS2), and the other installed in the car, everything else. The power elements of the device VD1, VD2, VS1, VS2 and VS1 and VD2 are particularly necessary to place on the radiators (heat sinks) made of aluminium or duralumin. And cable away from hot parts of the car. The front panel is “salon” part of the VM shown in figure 2A, a layout sketch of the power block disconnect switch is shown in figure 2B.

When used as K1 relay RES-22 (passport РФ500.131) there is an additional convenience when operating the vehicle. For example, is implemented by protecting the battery from deep discharge when the actual terminal voltage of the battery to 10.5 “weight” of the car is not longer activated. Sockets X1 and x2 serve to increase the comfort of operation WM.

Since the voltage of the battery falls by 0.22—0.26 V, then there is some deterioration of the charge. To prevent this relay is a voltage regulator it is best to connect as shown Over. Here, on “weight” relay-regulator connected to its negative terminal (via the contacts K1.3) to the “minus” of the battery, bypassing the VM. This measure eliminates the voltage drop and increases the accuracy of adjustment of the voltage at the battery terminals, and thus increases the reliability of the entire electrical system of the car. It is necessary to carefully isolate the relay controller from the “masses”. 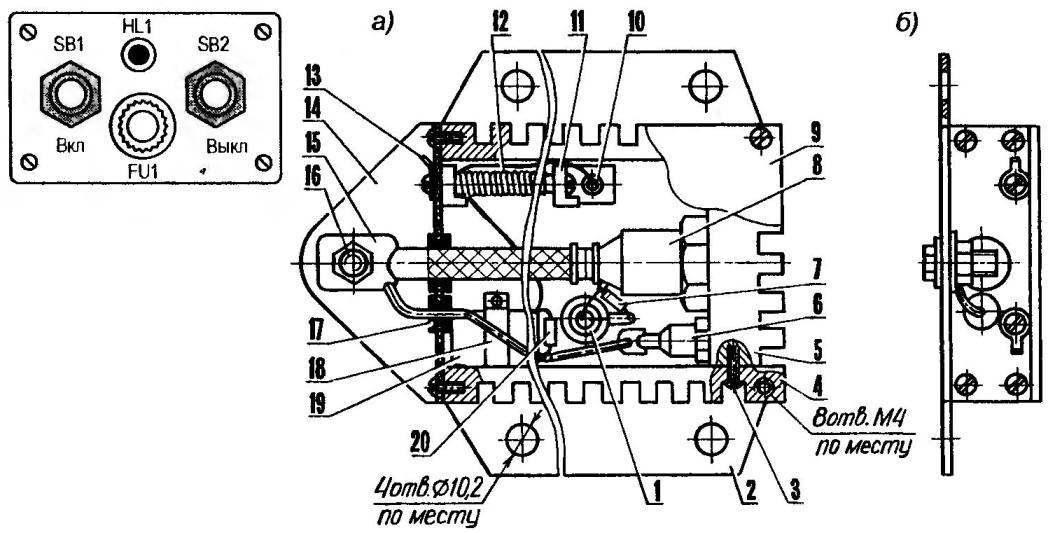 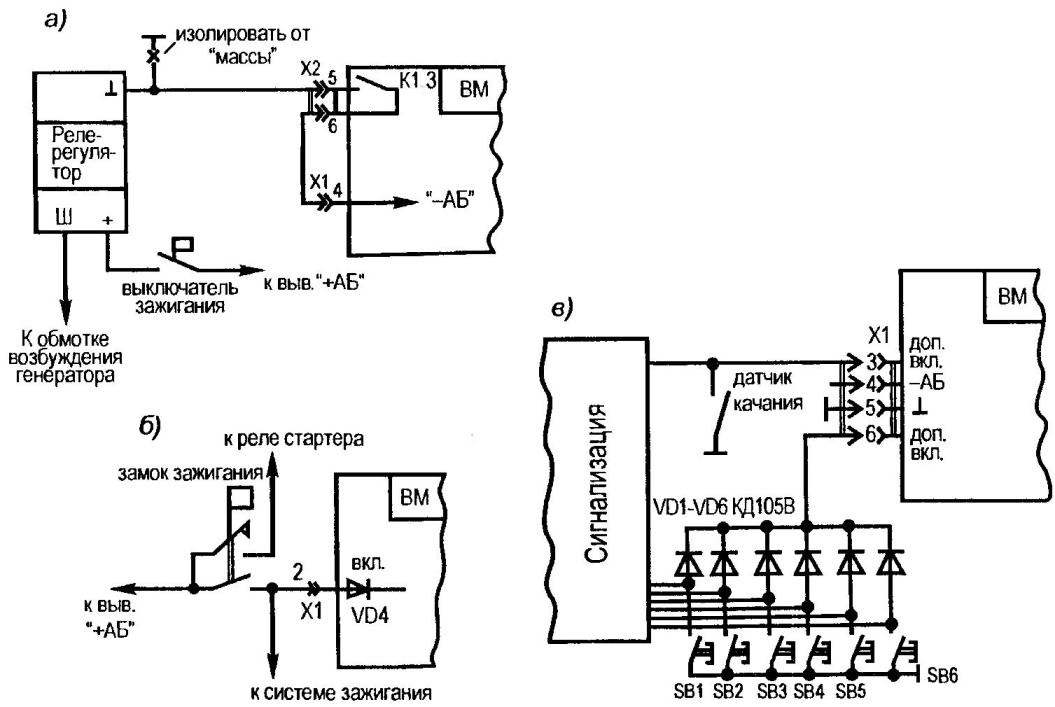 Fig. 3. Options circuitry to prevent a voltage drop in the circuit charge the rechargeable battery (a), to connect an electronic disconnect switch to the ignition switch (b) and alarm () using the door switch and sensor swing car

If the car has an alarm system using door switches-limit switches and sensor swing, the connection sockets X1 VM, it is recommended to implement the scheme shown in figure Fi. In the initial state the “weight” of the vehicle must be off and the alarm is on. When the door is opened, hood, or trunk when you swing the car closes the appropriate contacts of the sensors or switches, which leads to connection of the control electrodes of the thyristors to the common wire, and therefore the inclusion of the “masses”. The power supply will go into alarm, and she starts to have an alarm.

“Mass” will turn off only when you try to start the engine with the starter or by clicking the button “Off” of the VM (only when you turn off the alarm). And when you turn on the VM from the door “limit switch” sensor and swing the “weight” of the car will turn off when engine cranking by the starter due to the fact that if a starter (and hence the engine) the revs will start to work the generator. In the result of the operation of the generator starts to leak current of a circuit, battery (Iobr for VS1) that will lead to the locking of the thyristor.

Instead НL1 led digital voltmeter, including homemade (see for example , the development, published in the journal “modelist-Konstruktor” No. 3, 2001).