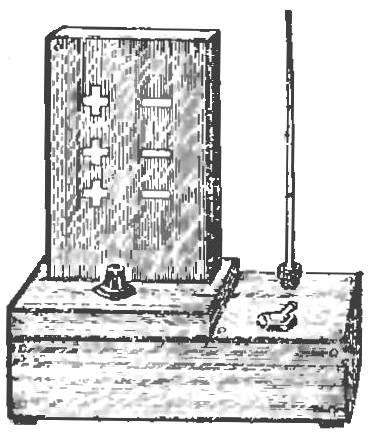 The well-known school electroscope, which demonstrate the phenomena of electrostatics, determines only the presence of electrostatic charge. What is it, positive or negative, we can only guess. This shortage is deprived of the device designed for young hams syut Nadvirna town, Ivano-Frankivsk region. It not only determines the sign of the charge, but also its approximate size.
Shoulder bridge DC across capacitor C1 (Fig. 1) includes a field-effect transistor V3. When an electrically charged object (ebonite or glass rod, a comb, etc.) closer to the antenna W1, terminals of the capacitor C1 raises the potential difference, the transistor opens. As a result, the unbalance of the bridge causing actuation of the polarized relay KR1. The direction of the current in its winding depends on the sign of the charge. Therefore, the anchor relays will include the right or the left group of lamps, flashing the sign of the charge.
The device has a housing consisting of two parts. Located at the top of the bulb installed behind the slots in the housing corresponding to the configuration of the signs + and —. Slot covered with tracing paper or a milk plexiglass. In the lower part of the housing is the circuit Board with relay and two battery 3336L (Fig. 2).

Schematic diagram of the device. 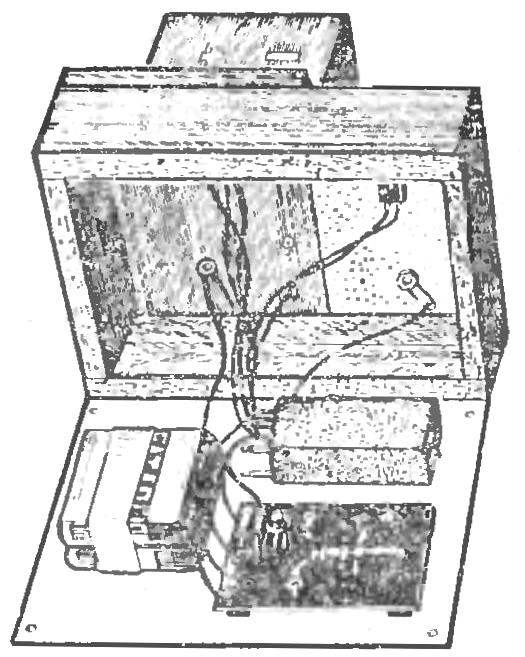 Fig. 2. The design of the device.
A variable resistor R5 to achieve that the sensitivity of the instrument was identical for both signs of the charges.
The device uses a polarized relay RP-5 (passport RS4.522.005). Instead of Zener diodes Д814А you can apply Д808, Д809, КС133А, КС139А, КС147А, КС1С8А.
If flashing the sign of the charge use only one bulb to power the device enough will one battery 3336L.
The antenna is a wire cut length 300 mm, Ø 3 mm. Socket for connections — from any school instrument.
J. BUCHKO, g. Nadvornaya, Ivano-Frankivs’ka oblast