Among the means of self-defense e-treskovye device (ASH) – not in last place, especially the strength of psychological impact on criminals. However, the costs are considerable, which encourages radio Amateurs to create homemade analogues (detailed material about it see, for example, in No. 5,’99 the magazine “modelist-Konstruktor”.

Without pretending to sverhordinarnogo and Superviso ideas, suggest their own development, to repeat which is able to anyone who at least once in their life has dealt with the winding of the transformer and installation of simple devices like crystal radio with an amplifier on one or two transistors.

The basis of my proposed device is constituted (Fig. 1A) transistor oscillator that converts the DC voltage from the power type power supply galvanic battery “Krona” (“Emery”, 6РLF22) or battery “Nika” in high variable, with the model multiplier, I), construction and operation of which are thoroughly described in No. 5 of the journal “modelist-Konstruktor” for 1997. A very important element of ASH is a self-made transformer (Fig. 15 and Fig. 2). A magnetic core is a ferrite core with diameter 8 and a length of 50 mm. This core can be split off, for example, the magnetic antenna of the radio, pre-nedelev source on a circumference edge of the abrasive stone. But the transformer works if the ferrite from TV TVs. However, in this case, you will have from the base of the U-shaped magnetic wire to produce a cylindrical rod of the desired size.

Tube-base frame for placement of the transformer winding serves as a 50-mm section of the plastic housing from its exhaust felt-tip pen, the inner diameter of which corresponds to the above-mentioned ferrite rod. Cheeks size 40×40 mm cut from a 3 mm sheet of vinyl plastic or plexiglass. With a tube-cut case of the marker they firmly connect, pre-lubricated seats dichloroethane.

For transformer windings is used in this case copper wire in enamel insulation high strength on the basis of miniflex. Primary 1 contains 2×14 turns 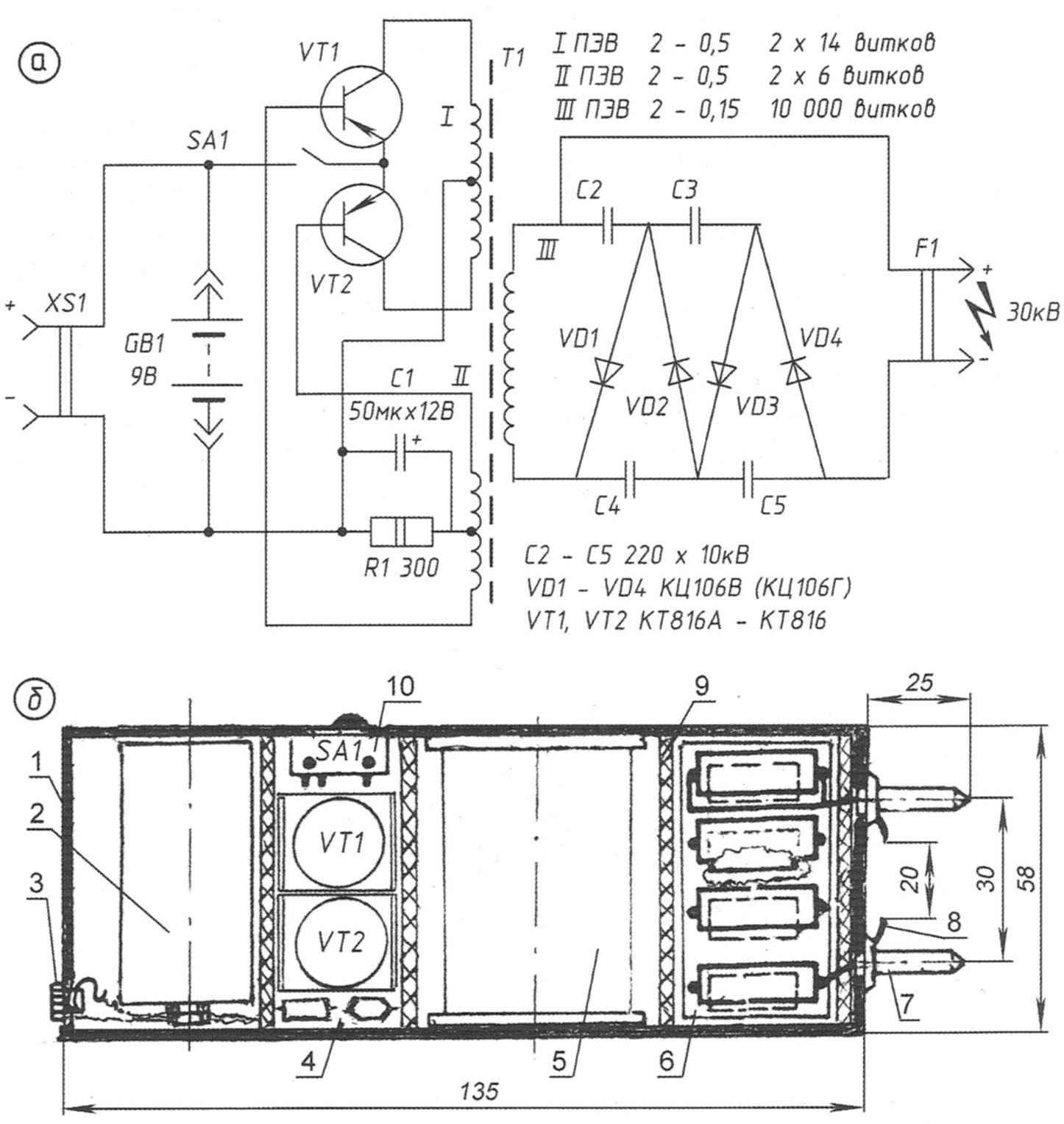 Fig. 1. Electrical schematic (a) and its realization in the reality – electro-shock remedy (b):

As the interlayer insulation instead of a film of polytetrafluoroethylene (PTFE) or polybag.-interelate (Dacron), usually recommended for such windings is an acceptable use of 0.035-mm interelectrode capacitor paper. It is advisable to stock up in advance: for example, extract 4-microfarad ЛСЕ1-400 or LSM-400 from an old installation of rebar under fluorescent lights, to develop long, it would seem, their resources, and cut exactly to the working width of the frame of the transformer.

After every three wire layers in the original broad brush certainly performed “greasing” the resulting winding with epoxy glue, slightly diluted with acetone (to “epoxy” was not very viscous) and 2 layers were laid kondensatornaya insulation. Then, without waiting for curing, the winding continued.

To avoid wire breakage due to the uneven rotation of the frame when winding, ПЭВ2-0.15 were passed through the ring. The latter was hanging on a spring from a steel wire in diameter of 0.2 – 0.3 mm, slightly pulling the wire upwards. Between the high voltage and the other windings were installed antitrombina protection – 6 layers of the same capacitor paper with “epoxy”.

The ends of the windings are soldered to the pins, passed through the holes in the cheeks. However, conclusions can be made without breaking the wire winding of the same ПЭВ2, folding in 2, 4, 8 times (depending on the diameter of the wire)and twisting them.

Ready transformer wrapped with one layer of glass and fill with epoxy. The terminals of the windings when mounting the press to your cheeks and placed with a maximum dilution of ends from each other (especially in the high-voltage winding) in the suitable compartment of the housing. As a result, even with a 10-minute (and longer continuous use of protective electro-shock device and is not needed) breakdown at the transformer are eliminated. 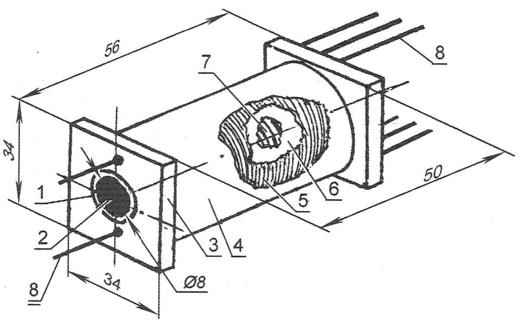 1 – the base of the coil (cut the body of the pen); 2 – magnetic core (part of the magnetic antenna of the radio or machined from a ferrite television TVs); 3 – cheek (3-mm vinyl plastic or Plexiglas, 2); 4 – protective wrap (fiberglass layer); 5 high – voltage coil (10,000 turns ПЭВ2 to 0.15); 6 – antitrombina protection between low voltage and high voltage windings (6 layers of the interelectrode capacitor paper sizing them with epoxy resin); 7 – low-voltage winding I and II (respectively, 2×14 2×6 and turns of wire ПЭВ2-0,5); 8 – (15-mm cut 1.5 mm tinned copper wire, 8), before installing in the housing to bend; material midplains of winding insulation – electrode capacitor paper, and after every three layers of wire – double layer of the same paper with the additional sizing “epoxy”

In the original embodiment of the generator of the ASH have been designed to use transistors КТ818. However, replacing them with KT816 with any alphabetic index in name and setting on a small plate radiators helped to reduce the weight and dimensions of the entire device. The same was facilitated by the use of the voltage multiplier proven КЦ106В diodes (КЦ106Г) with high-voltage ceramic capacitors K15-13 (220 pF, 10 kV). In the end, we managed to fit almost everything (excluding a mustache and a safety pin spark gap) in a plastic housing of type soap dish of size 135x58x36 mm. the weight of the protective ASH in the collection – about 300 g.

In the housing between the transformer and the multiplier, as well as at the electrodes by soldering the necessary partitions from a fairly durable plastic – as a measure to strengthen the design as a whole and precaution in order to avoid rising sparks from one of the radioelement installation to another, and also as a means to protect the transformer from breakdowns. The outer part under the electrodes are attached mustache made of brass to reduce the distance between the electrodes, which facilitates the formation of a protective discharge.

In the original design the distance between the pin electrodes is 30 mm, and the length of the crown – 20 mm Protective spark is formed and without the ‘whiskers’: between spikes pins – working bodies, but increases the danger of breakdown of the transformer, firmware installation inside the case.

Actually, the idea of “moustache” taken from “branded” models and developments. Taken that is called into service and such a technical solution, as the use of certainly slide switch type: in order to prevent self-actuation when electroshock remedy lies, say, in the breast or side pocket of his owner.

It is useful, I think, to warn the hams about the necessity of careful handling with protective ASH during construction and commissioning, and when walking with the finished device. Remember that it is directed against the bully, criminal. Do not exceed the limits of necessary self-defense!