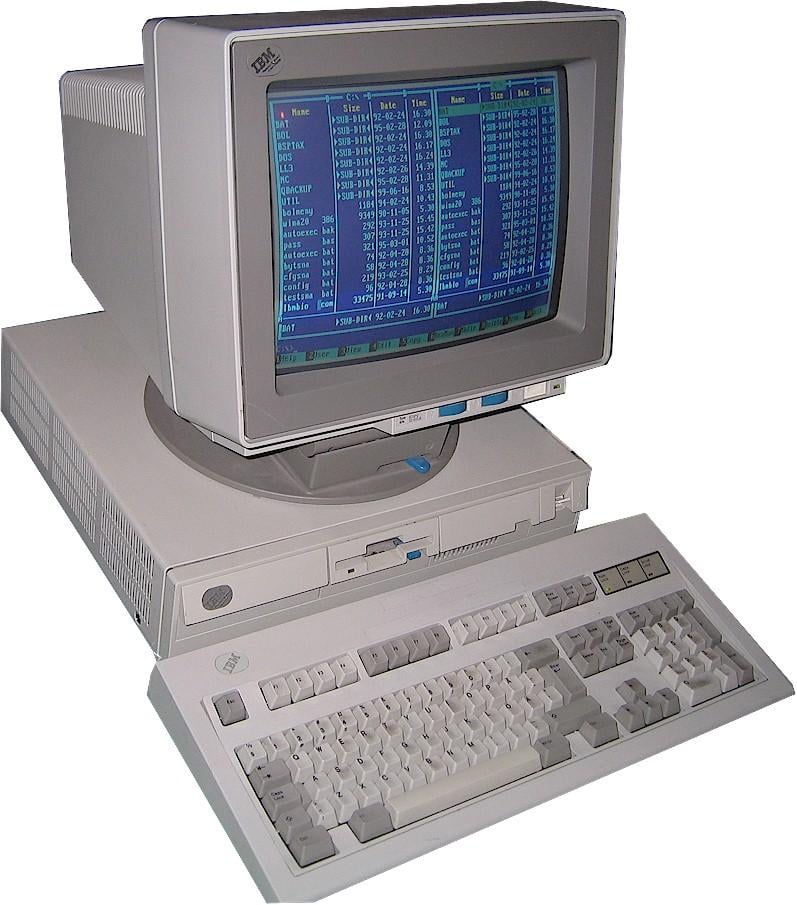 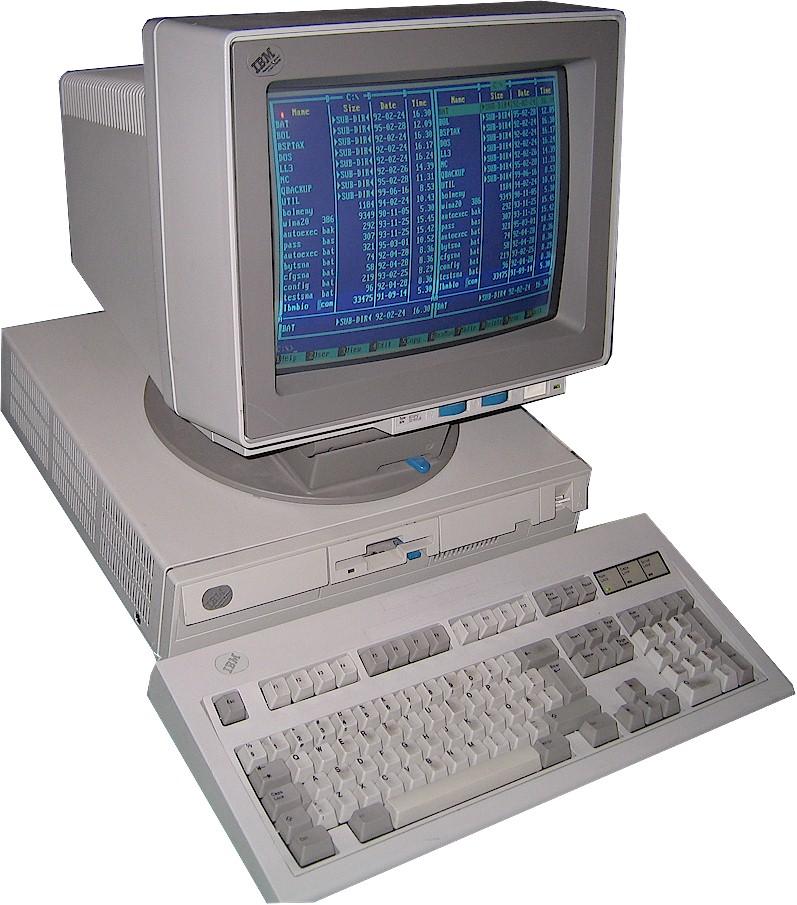 Devices for influencing the so-called biologically active points (BAP) are known to many. Including those created by radio Amateurs. Circuitry underlying some BAT-stimulants, saw light in the pages of “Modeller-designer” (see “modelist-Konstruktor” No. 1 and 3 in 1998). However, to implement them was proposed, as a rule, “miscomputing” database. Well, if to approach from positions of today, when even personal supercomputer are not uncommon?
Such an attempt I had made. The results were satisfied. Sure, among the hams and computer geeks — readers — there are many wanting to repeat or double-check these findings. Therefore, I consider it necessary to at least briefly outline some considerations about the nature made.
Under the supervision of doctors received numerous confirmation: the character of electrical stimulation on acupuncture points (and through them — on the internal organs and the whole person) depends on your computer speed, type of current, voltage and other related parameters. If at a constant voltage of 24 V is almost no one there any noticeable sensations, then this pulse will not say. Although there are certain nuances, other times very noticeable. 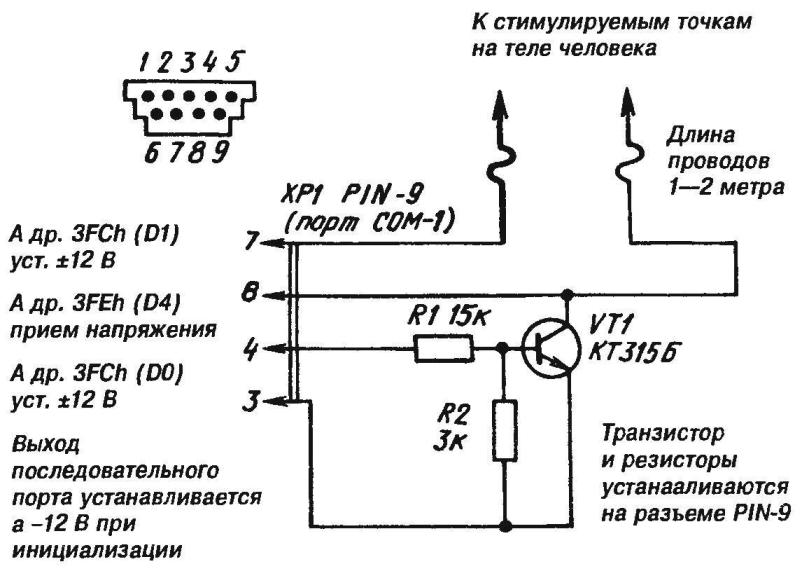 A circuit diagram of the device for electroacupuncture using the IBM PC and the Pinout of the connector PIN 9 of the serial port COM 1 on which the circuit is mounted
When, for example, the duration of the “spikes” coming to BAT is small and the capacitive component of the voltage drop on the human body shunts VOUT, the severity of the moment almost not observed. In this case we have a situation similar to the touching the antenna is a low-power transmitter.
The most sensitive effects appear at exposure time corresponding to the propagation velocity of nerve signals in the body. This tingling, and burning and involuntary muscle twitching until the appearance of is extremely unpleasant (if not dangerous!) okolosvetovyh reactions. Hence the rule: all experiments, medical procedures associated with the stimulation of biologically active (acupuncture) points should be carried out under the supervision of a physician (which, in fact, and I have observed).
Consider the diagram, where the abscissa shows the time t with the selected areas T1 and T2, is proportional to the resistance value between terminals 7 and 8. The magnitude of this resistance can safely be judged by the change of the voltage drop and passing a pulsed current through the BATH. Moreover, if the terminals 7 and 8 are open, then there is no dependency and the voltage is not changed, as evidenced by the dashed line.
The program is finding the points and their stimulation 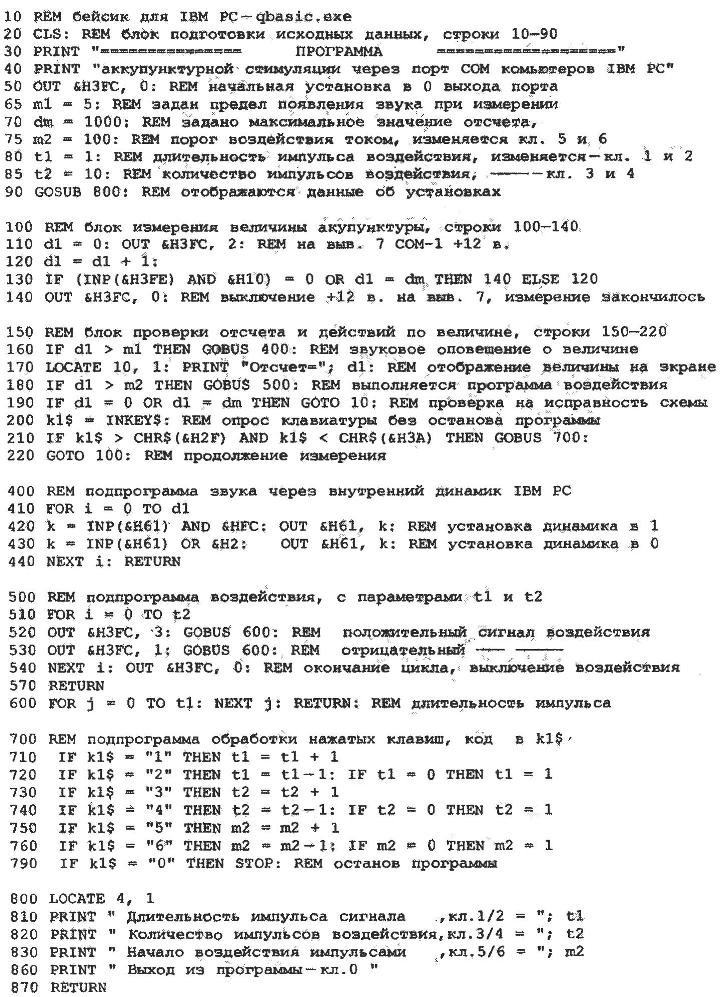 Even from the preliminary analysis of the voltage drop when passing a pulsed current through the BAT visible: the electrical resistance of the human body is complex (has a capacitive-inductive and reactive components). The switching voltage depends on both components, and the shape changes exponentially, which was used as the adjustment of an electrical circuit with the program completion and subsequent measurements the location of the acupuncture points, electrical stimulation.
To operate the computer in all these areas is used VT1 is controlled programmatically via the terminal 4. In the open state, the transistor closes the terminals 3 and 7. But on the third output constantly present -12 V, which are set during initialization of the computer, when between terminals 7 and 8 starts to operate, the voltage of 24 V.
Since serial ports are used output circuits open collector and short-circuit current is determined by the internal load resistance, the circuit between terminals will not damage the serial port COM-1.
In conclusion, a few words about the program itself. Presented in tabular form in the language BASIC, which is a command interpreter and therefore does not apply to high speed, it does not provide high accuracy of measurement in acupuncture. Yes, this is not required. Well, if someone has a desire to improve the measurement accuracy of 10-20 times on the same computer, then on the proposed algorithm and write a program in the language of the compiler type.
LITERATURE
1. The portable apparatus for electro-stimulation of acupuncture points and neuromuscular structures. Protocol of the Ministry of health of the Russian Federation from 14.01.1991 G.
2. V. Mikhailov Electricity and people. — Leningrad: Energoizdat, 1982.
3. Novikov Yu. V., etc., the Development of interface device for a personal computer type IBM PC. — M.: EKOM, 1997.
4. The pair of sensors and the unit labor-output data with the computers IBM PC. — Edited by W. J. Tompkins and. Webster’s. — M.: Mir, 1992.
5. Churuksaeva M. Stimulator on the chip. — “Modelist-Konstruktor”, 1999,№ 1, p. 19-20.
6. Sapronov A. Capacity — through port SOM-2. — “Modelist-Konstruktor”, 1998, № 9, p. 21-22.
A. SHARONOV, Novosibirsk, Russia