Fun — fishing in open water. With the early spring as soon as the ice recedes, and until late fall the true fisherman whenever possible, in a hurry to the pond with the hope of a successful trophy. But it is not always possible to return home with their catch.

There are days — no matter how you try and fish all takes. Is it worth it then, without stopping, to hurt one’s eyes to follow the “behavior” of the float or the tip of the rod? Is it not better, continuing to fish at the same time read a book or enjoy cooking? This will help you electronic bite alarm. He promptly informs you that the fish start to bite. With e-Rybolov can serve several gear, letting the sound and light signals simultaneously, which is very convenient in the twilight, and even specify, what kind of rod it is necessary to hurry.
Schematic diagram of the device shown in figure 1. The audio signal is supplied from the generator assembled according to the known scheme. Except the transistors, it is possible to apply a similar semiconductor devices of different structures: 1 VT — series МП39 — МП42, VT2 — series MP35 — MP38, and KT315 or the other. Diodes V01—D9 VОЗ stamps with any letter index; will also fit D2. Capacitor — small type MBM, resistors — MLT, sun.
Depending on the dimensions of your existing plastic boxes choose appropriate dynamic head; suitable and conventional telephone earpiece. LEDs VР4—У06 АЛ307 red glow. They can be replaced with other brands or use a standard bulb 2.5 V, (0.15 A) from the flashlight.
Alarm bite fish is powered by a battery “3336” or three batteries of type RC-53 (4.5).
A similar scheme alerter bite was published in the “M-K” (1990, number 8). Although the principle of operation of both indicators is the same, the sensor design of nibble fish in the last option is more reliable; in addition, it has higher sensitivity, and the device is convenient to transport and store (mechanical damage of the sensor is virtually eliminated, even with rough handling).
The use of LEDs is justified by the fact that their glow is more visible in Sunny weather rather than light bulbs. The introduction of additional led V07 is also not a fad: it turns on when triggered, the contacts of reed switches mounted in the sensor fish mounted on each rod. This led white light mounted in the middle of one side of the body on the same axis with the led (Fig. 2).
Suppose you fish at night. At poklevke the V07 led lights simultaneously with the led, for example, VБ5. The fish took the bait the second rod. If will flash the led VР4, the fish interested in the bait the bait the left. The contrast of the glow of white and red LEDs allows you to keep the bait in sight at a sufficient distance.

Fig. 1. Schematic diagram of the alarm device.
Fig. 2. The appearance of the device. 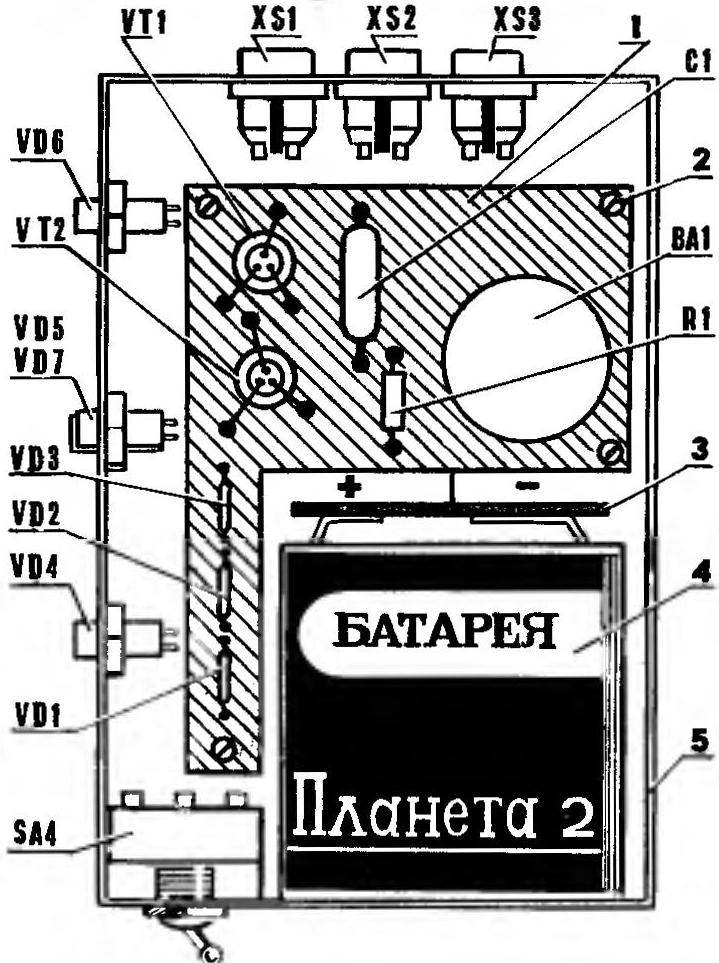 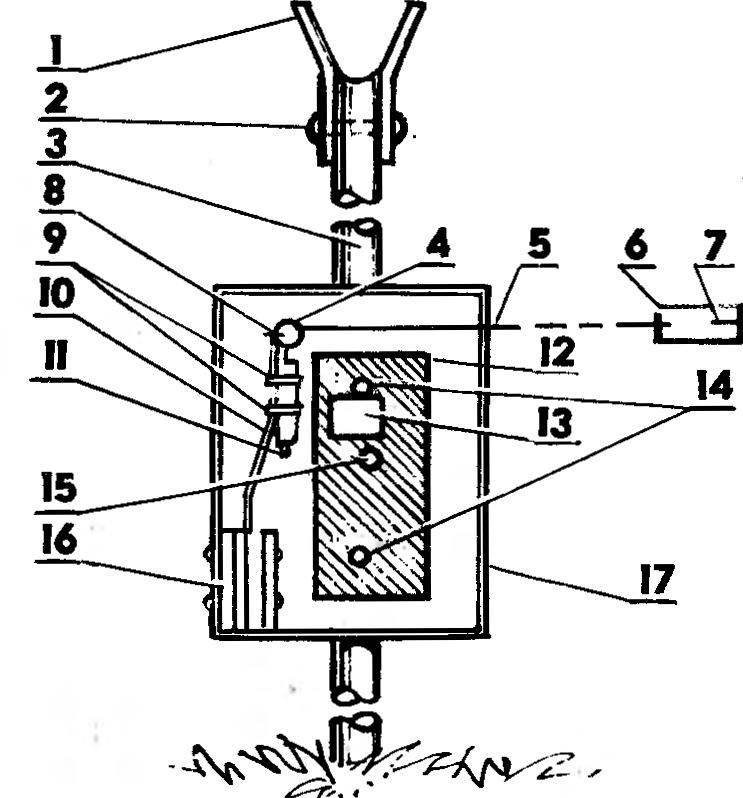 R and S. 5. Sensor design:
1 — saddle to the rod, 2 — rivet, 3 — pin (cut the tube from a ski pole), 4 — ring for attaching a nylon thread, 5 — nylon thread, 6 rubber clamp, 7 the slot for fixing the fishing line 8 thread for mounting rings, 9 — node mounting of the reed switch, 10 — spring (peaked caps), 11 — reed, 12 — plate made of sheet metal, the magnet 13, 14 — mounting screws of the plate and the housing to the tubular pin, 15 — a hole to mount the cover, 16 the mount spring 17 — housing.
The alarm device can be installed in any place convenient for you (suppose in tents), depending on the length of the connecting wires.
The presence of switch ЅА4 also necessary: for example, in rainy weather, when the nozzle on the hook do not want to change, the alarm should be turned off, without leaving the tent. Switch off ЅА4 well as during transport and storage of the device.
The internal layout is shown in figure 3. Basic radio components position on the mounting glinkovo Board. Connectors ХЅ1—HZ — standard, from a household radio. The number of rods that caters to this device, it is possible to increase (Fig. 1 shown by dashed lines).
The design of the sensor in figure 5. For he used the case of watches. It drilled the holes for the mounting screws and nylon fishing line. Leaf spring used on… peaked caps. Using yarn and glue to the spring attached to the reed switch, and some distance from it — a permanent magnet. Find the location of the magnet easy. At the bottom of the sensor body put a strip of tin and by moving the magnet toward the reed switch, determine that the position of the magnet, wherein the reed switch is easily triggered, that is, to enable an electrical circuit. To configure the sensor use the light bulb from the flashlight. The plate attach to the body with screws, and the magnet stick.
How to install the indicator rod and the bite on the beach — shown in figure 4. Connecting wire — stranded, isolated. Their length depends on the specific conditions of fishing.
As to clamp the fishing line you can use clothes pegs, but better cut in thick rubber with a slot. When podsekanie fishing fish line freely out of engagement with such clamp.
In the presence of short rods to catch fish with the use of the indicator poklevki you can keep not only from shore but from a boat.
I use this indicator when fishing bottom fishing rods and tackle, is equipped with rubber shock absorber.
A. SUHORUKOV