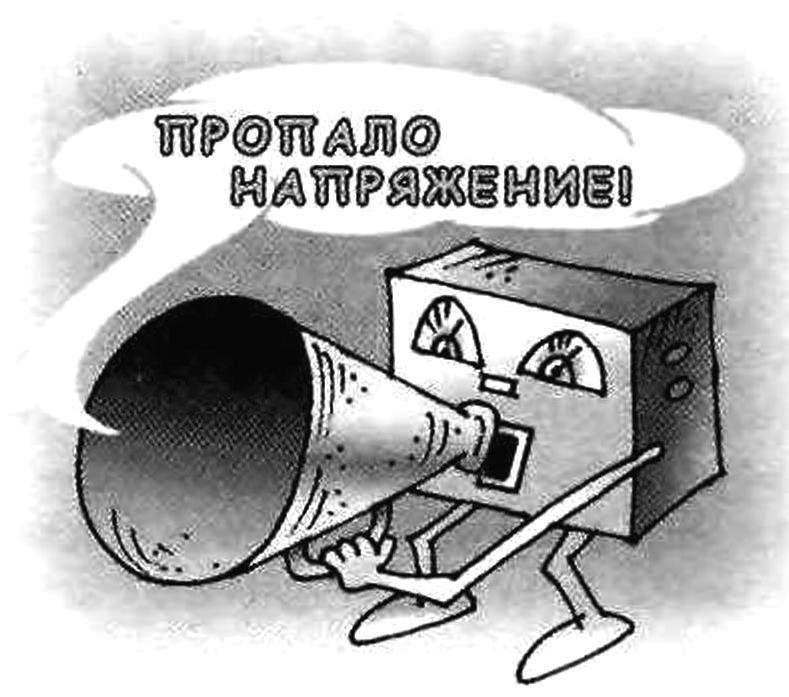 Electronic control units of tension are not new in modern developments. The proposed device differs from the majority of them use as the base timer КР1006ВИ1 and unusual sound effect that is activated if the power of controlled DC voltage, thanks to the use of flashing LEDs L36- piezoelectric capsule with a built-in generator emits a sound similar to the siren of the fire truck.

This sound effect could be achieved using two or more chips, each of which contained the audio oscillator. Now, thanks to the tested variant with the use of flashing LEDs, circuit design is considerably simplified.
Received through the console sound effect is much more diverse than single-tone beep, and plus to this — there is the possibility of creativity. So, if you are using other audio caps and the change in resistance of the limiting resistor R4 get different sound effects: from the howling of the siren to automatically randomly variable intermittent signal tone.
In this case, the chip КР1006ВИ1 is used as a comparator. In the presence of the controlled voltage at the input of at least 4 In (its threshold sensitivity of the comparator is adjustable by the variable resistor R2) on the terminal 3 DA1 becomes low voltage level and the audio signal is absent. When the change in the monitored voltage below the triggering threshold of the comparator (or even its disappearance) the internal trigger timer КР1006ВИ1 being transferred to another steady state, and its output (pin 3 DA1), immediately set the high voltage level — it connects the circuit of the piezoelectric capsule with an internal oscillator and consistently connected with him flashing led HL1.
The IC output DA1 is a “dipole”, that is, the load device can be connected, as shown in the diagram between the DA1 terminal 3 and ground, and between terminal 3 DA1 and the positive pole of the power supply (pin 8 DA1). This feature allows the chip to expand its functionality even in this case. Connecting the bottom (under the scheme) the output of the resistor R4 to the positive terminal of electrolytic capacitor C1 (respectively, changing to the opposite connection of the led HL1), get the device with a reverse function. Now the audio signal in the form of a siren will be activated in the presence of controlled tension and disappear in his absence. 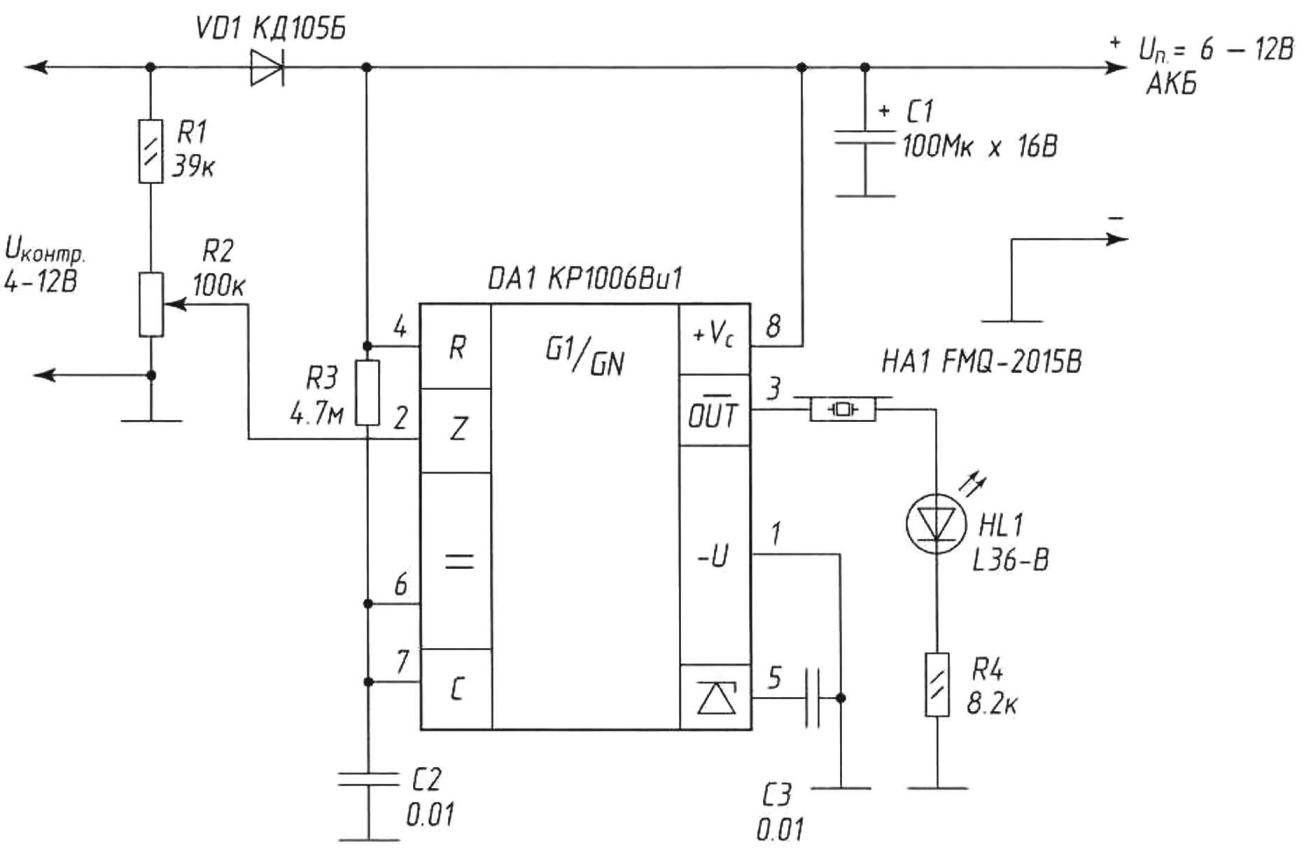 Schematic diagram audio alarm of low voltage stabilized power supply
With proper installation and proper elements of the device begins to work immediately. The establishment is correctly set (if necessary sensitive input КР1006ВИ1 enables you to respond to changes in voltage to 0.1 V) variable resistor R2 of the switching threshold of the comparator. Before first power-up the engine variable resistor R2 is set to the middle position. As a rule, to control the voltage in terms of “Yes/ no” is enough and other adjustment is not needed. The closer the average output of R2 to the bottom (under the scheme) — the less the sensitivity of the site.
The volume of the beep is determined by the parameters of the cap HA1 and its resonant frequency.
All fixed resistors — type OMLT-0,25 (import analogue MF-25). Variable resistor R2 (can be replaced by rigged) — in the original applied SPO-1. Independent power source — a car or motorcycle battery with a supply voltage of, respectively, 12 or 6 V. Is it possible to use a stationary power source, but it needs to provide a stable voltage. The current consumption from the power supply mode of presence of the measured voltage does not exceed 2 mA, while the sound signal is increased to 12 mA.
The measured voltage is any DC voltage in the range of 4 — 12 In (despite the fact that the performance of the chip КР1006ВИ1 is maintained at a voltage of +15 V, the level of the controlled voltage should not exceed the voltage level of the power source), it can be obtained by any voltage converters, such as transformerless.
Oxide capacitor C1 smooths out the noise on nutrition. The type K50-24 or similar with operating voltage of at least 16 V. non-polar capacitors C2 and C3 of the brand КМ6. Rectifier diode VD1 is used for interchange circuits controlled voltage and independent power supply. Is specified in the diagram a diode can be used КД103, КД105, КД211, KD213 with any alphabetic index. Besides the type of led is possible without schema changes to use the same electric characteristics of the devices L-36b L-56V, L458В, L-769ВGR, L-56DGD, ТLВR5410, L-36ВSRD, L-297-F, L517hD-F. as piezoelectric elements (except specified on the circuit) you can apply 1205-FХР, FМQ-2724.
A. KASHKAROV, St. Petersburg