The proposed device is designed for automatic control of vibrionaceae Malysh, Rucheek and the like for operation in boreholes (wells) with a low flow rate of water or for periodic pumping of groundwater. Machine applied non-contact water level sensors, installed directly on the lifting hose of the pump, allowing it to be used in wells of small diameter.

Vibronics (Fig. 1) with a water hose hanging on a metal rope in the well. Hose sensors are provided at top water level (VU) and lower level (WELL). The device operation is based on the change in conductivity between the common electrode, which is used as a metal cable suspension pump, electrodes and sensors located in the water and out of it. The condition of the sensors is analyzed by a logical node on the chip DDI (Fig. 2).
The work cycle of the machine proceeds as follows. When the sensors of the upper and lower levels are in the water, the conductivity between the cable and the electrodes of both sensors is large, and when the power toggle switch SA1 at the inputs R and trigger levels are set logic 1, resulting in the same level on its direct output, causing the opening of the key transistors VT1, VT2, and the inclusion of relay K1, the contact K1.3, K1.4 connects the pump to the network.
When pumping water the pump will turn off only when the input R DDI will be a logical 0, that is, when the water drops below the lower level sensor. A trigger condition is characterized by a logical value of zero at its direct output, causing the closing of a transistor switch, the off relay and pump. 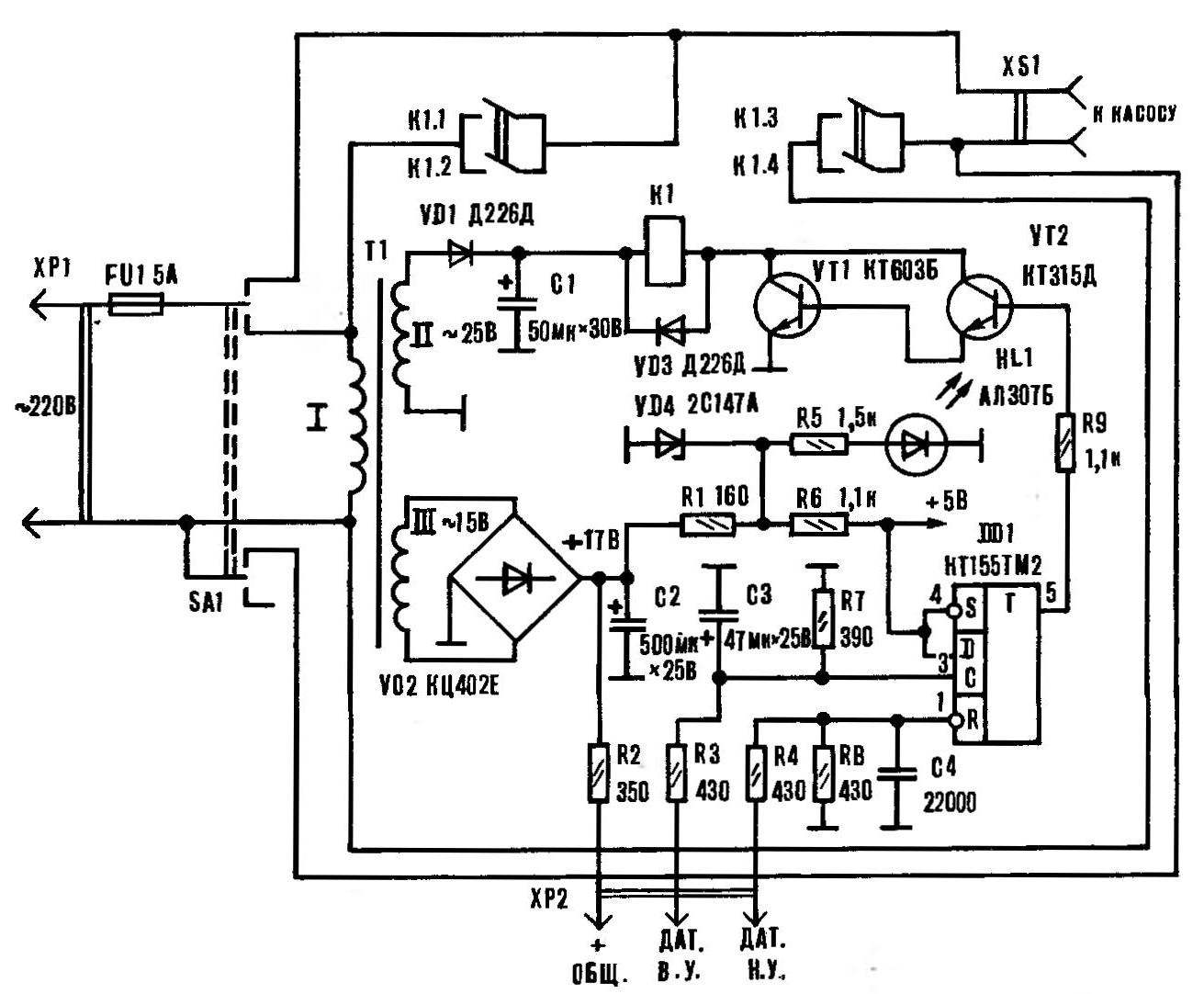 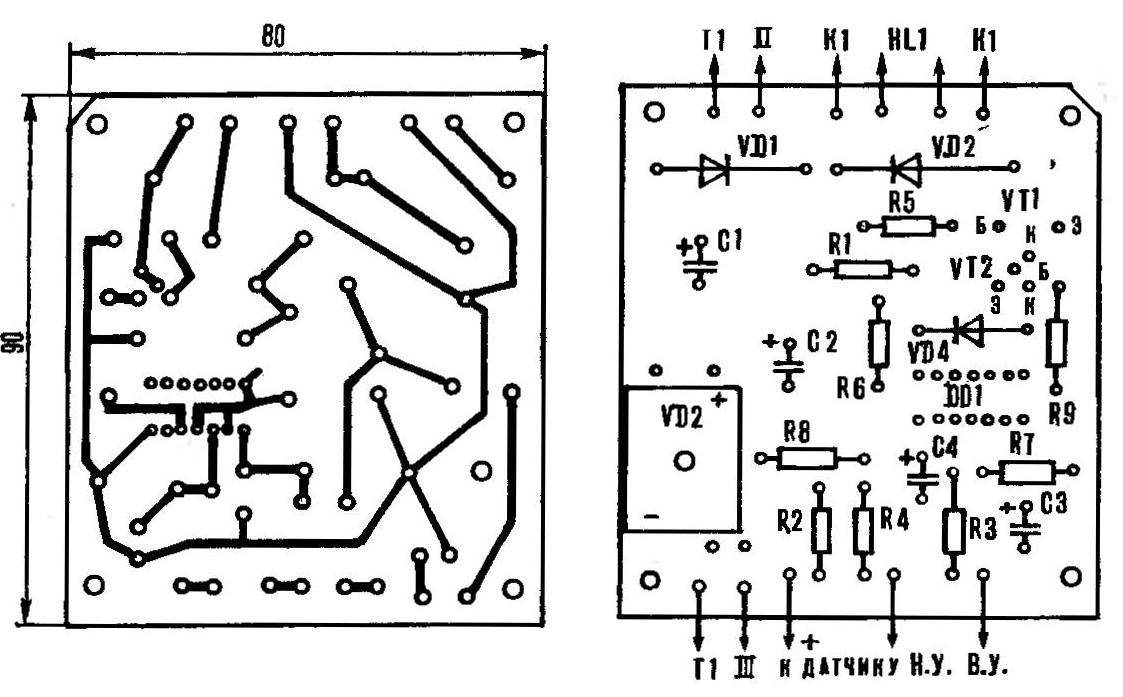 Fig. 3. Printed circuit Board with the layout of the elements. 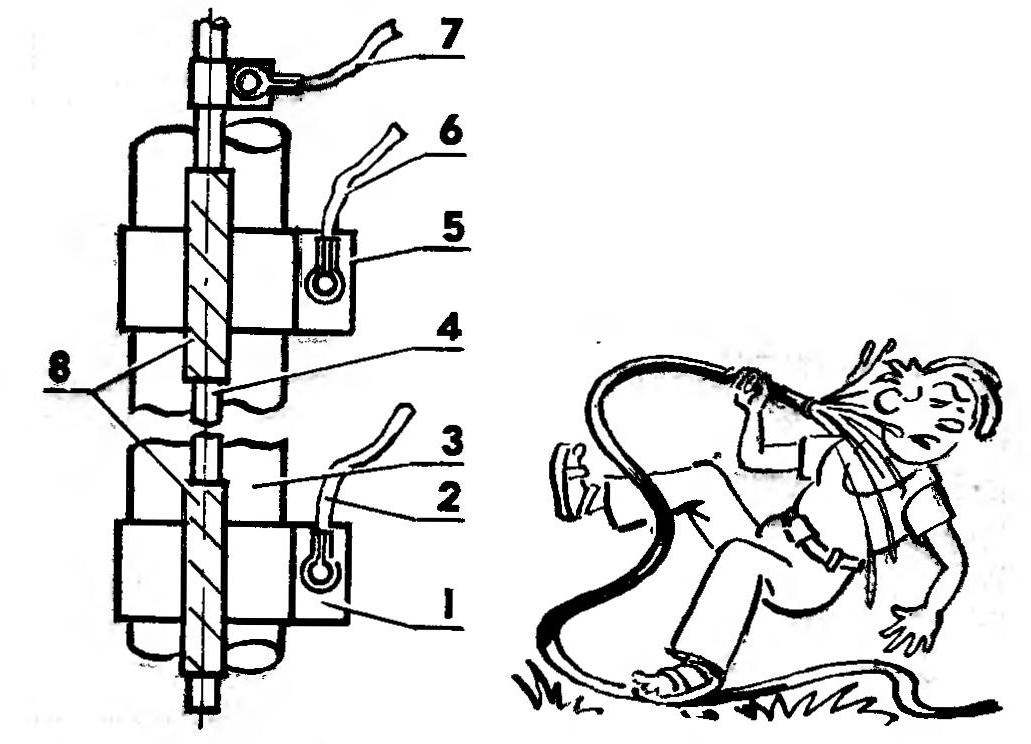 R and S. 4. The location of the sensors on the hose:
1 – the lower level sensor, 2, 6, 7 — lead about water, 3 — water hose, 4 — cable suspension pump, 5 — high level sensor, 8 — tape PVC.
After the pump has stopped, the water level in the well begins to rise and when it reaches the lower level sensor, the input R trigger, you receive a value of 1, which, however, does not enable the pump because at the input there is a voltage of logical zero until the upper level sensor water has not risen. It was only after the rise of water in the well until the upper level sensor input From the DDI voltage will be logic 1, and on its direct output is also set to logical 1; will turn on transistor switch, relay and pump: the process of pumping water is repeated.
Resistors R2, R3, R4, R8 are used to set the required logical values on the inputs of the trigger.
mikania between the cable and rings, the first insulated three layers of PVC tape on the section length of 30-40 mm. Leads are brought to a plug connector, mating part which is mounted on the box unit; there is also a socket to connect the plug of the pump. Wire and cable presentazioni to the water hose.
When installing the device in the borehole with a metal casing so you need to hang the pump to completely eliminate the touch sensors to the pipe.
When installing without errors to establish a device is not required. For stable operation of inputs I? and the trigger voltage should be 3V To 5V (sensors in water). Depending on the resistance of the layer of water between the sensors and the cable-select specified voltage using a resistor 1?2. The current through the sensor does not exceed 5-10 mA when the resistance of the water layers between the sensors and the cable is 1,5—2 ohms.
Assembled device to check at home (on the table), and fabricated for this purpose the layout of the sensor and using a suitable vessel with water, and instead of the pump connect a table lamp.
L. ROMANOV, V. KIREEV, Khimki. Moscow obl.