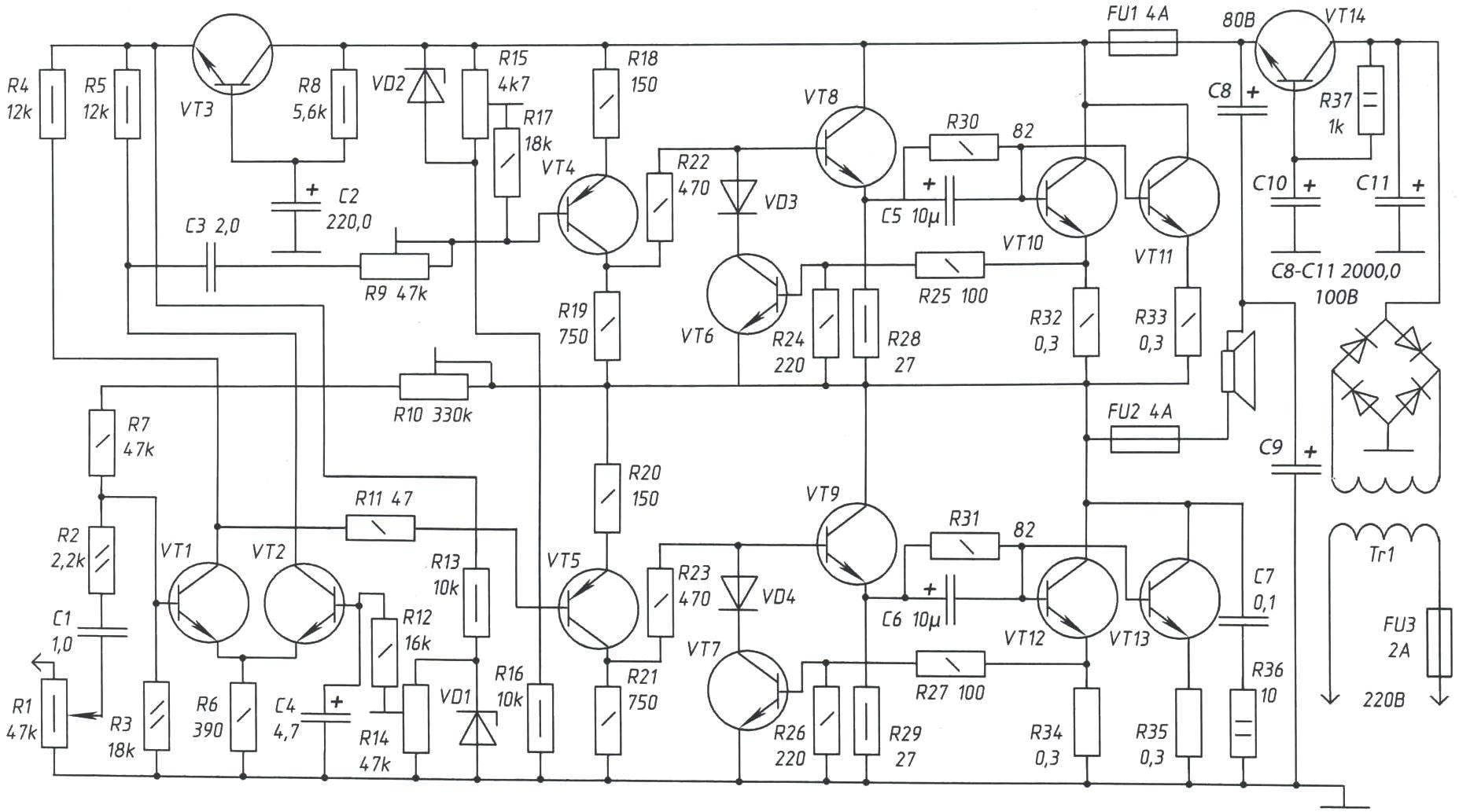 First of all, by creating transistors with n-p-n-junction have the opportunity to separate the signal due to the properties of the transistors, since some of them are open positive pulse and the other negative. Amplifiers such transistors can be substantially simplified, however, on their release there was significant distortion of the signal. To get rid of them, radiokonstruktor began to complicate the scheme of amps, not to seek other ways of diagramming the ULF.
And another, perhaps the main cause of rejection of schemes with the phase inverter to the first transistor was a significant overheating of the output transistors of such amplifiers that exclude them from any long-term operation at high output power.
All these considerations made me a musician and composer, carefully analyze the well-known schemes of ULF in order to find the cause of the distortion. I went his own way, relying on their knowledge of the “tube” electronics. For this I had to learn how to design and calculate components, creating hundreds of experimental models, in the end I managed to find the cause of the overheating and eliminate it. In the end, I developed a low-frequency amplifiers operate at supply voltage up to 90 V, while the output power of about 300 watts.
Offer the readers a description of the design of such amplifiers with a phase inverter on single transistor – its power output is 120 watts.
The phase inverter is a single transistor created by analogy with the tube, produces an accurate separation of the signal phase for the upper and lower shoulders of the amplifier circuit, eliminating the appearance of “steps” and “ringing”. The work of amplification current in the linear regime practically does not cause other distortions.
The result is an amplifier with almost linear characteristic, producing no distortion; the “coloring” of the audio output transistor ULF turns almost the same as in the past through a quality tube amplifier.
Design ULF with an output of 120 W bass reflex on the first transistor
The first transistor VТ-1 is a phase inverter, dividing the signal phase for the upper and lower parts of the scheme, and the amplifier signal voltage to the lower part of the diagram the ULF.
Transistor VТ-2 assembled amplifier voltage emitter pulses from VТ-1. For the upper part of the diagram the signal is taken from emitter VT-1 and enhanced voltage transistor VT-2 included in the scheme with a common base. On the VT-4 – VT-13 is the gain of the signal current. Transistors VT-4 – VT-5 collected phase inverters that were used for output it was possible to use transistors of the type КТ808А, КТ808БМ, CT-819Г or other n-p-n transistors of the same power.
The amplifier uses three gain stages for the current-as shown, two stages for normal operation of the amplifier is insufficient. 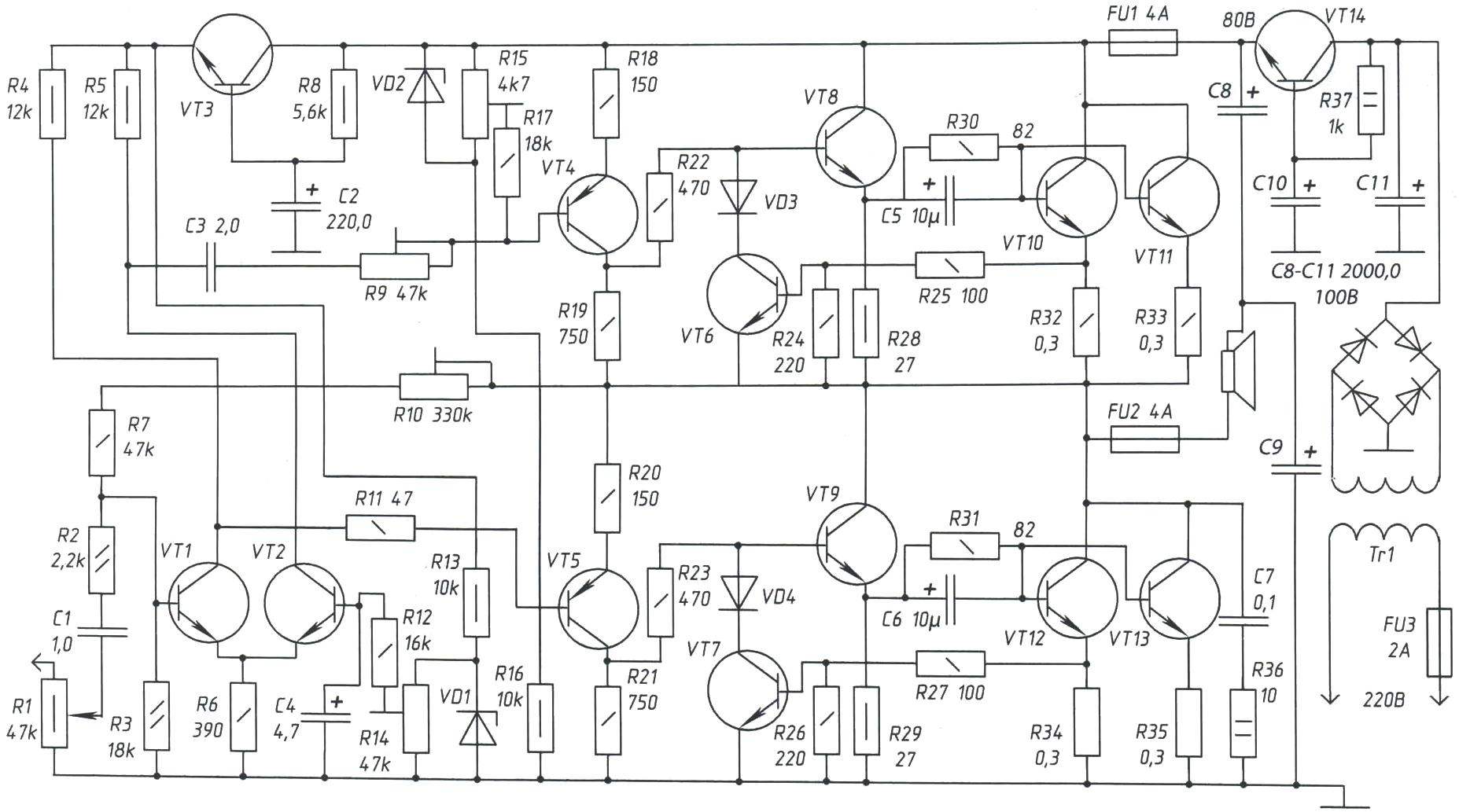 Schematic diagram of the low-frequency amplifier with a phase inverter on one first transistor (VT-1, VT-2, VT-3 – CT-815G; VT-4, VT-5 -CT-814Г; VT-6, VT-7 – CT-315Б; VT-8, VT-9 – KT-817 G; VT10, VT-11, VT-12, VT-13 – CT-808А; VT-14 – KT-808А; VD-1, VD-2 – D-814В – VD-3 VD-4-D-220)
The power bases of the transistors VT-2 and VT-4 – from the Zener diode that provides a “smooth” operation of the amplifier. Transistor filters on the VT-3 and VT-14 almost completely removed the background of the alternating current.
Transistors VT-6 and VT-7 provide protection from overloads, arising at the moment when the ULF to the network; the signal quality is not affected. Speakers are connected to the output of the amplifier through capacitors in half-bridge circuit.
Between the emitter of VT-8 and VT databases-10 and VT-11 (as well as between VT-9 and VT-12 – VT-13) included RC chains R30, and R31 C5.C6, by which the bias on the bases VT-10 – VT-13 at the maximum the signal decreases and the transistors don’t overheat. The lack of such chains leads to overheating of the output transistors.
Capacitors C8, C-9, C-10 and C-11 should be designed for a working voltage of 100V. By the way, in the 1970-ies of the electrolytic capacitors of large capacitance was very expensive and scarce, forcing designers to develop a way to switch on the speakers without these components, however, such protection was sometimes more expensive than the amps themselves and not reliable.
Configures the amplifier very easily, in just a few minutes. The first switch preferably be produced through a series connected incandescent lamps with a capacity from 40 to 75 watts. If the amplifier is assembled correctly, when you connect the bulb flashes brightly and then goes out. In the process, perhaps the dim glow of the filament lamp.
Resistor R14 is set to the lower position, R15 in the upper, R9 and R10 in the middle.
To the base of the transistor VT12 to connect high impedance voltmeter to voltage 1 – 3 V and the resistor R15 to set the voltage of 0.4 – 0.5 V. the Resistor R10 you need to set the voltage at the midpoint equal to half the supply voltage. Resistor R14 on the header VT-2 is the same voltage as at the collector of VT1. Resistor R9 equalize the signals going to the top and bottom part of the diagram – it’s easy to do and at the hearing.
You then turn on the amplifier by disconnecting the bulb, and repeat. If the LFA was assembled properly from good components, you can connect it to speakers.
The output transistors are mounted on heat sinks with cooling surface 1200 cm2, VT8 and VT9 – on radiators with an area of 80 cm2 and VT-14 – 500 cm2.
The diodes in the power supply should be rated at not less than 20 A, and the rest – for current over 50 A.
Load resistance of the amplifier is 3-8 Ohms. The gain current of the output transistors should be at least 20 units, and the rest — more than 50 units.
The amplifier has good stability and can work indefinitely, and during this time the modes of the transistors do not change. The audio output of the ULF is clear, natural, a little different from what speakers reproduce high-quality tube amp.
V. SMIRNOV, Voronezh region, Talovaya