Our magazine has already told about this exciting game, made on the electromagnetic relay (see “M-K” №1, 1976). And today hams instead of contact devices are widely used in their structures with modern elements as transistors, thyristors, LEDs, integrated circuits. New versions of the game “Who is faster?” with the use of such devices and readers.

I — transistors. The easiest game device to run on silicon transistors and small lamps 3,5ВХ0,26A flashlight (Fig. 1). It works like that. Suppose that S1 is pressed. Then to the base of transistor V1 goes positive battery voltage G1. Current will pass through the bulb H2, the resistor R2, the closed switch S1, and finally get to the base V1. The transistor opens, the lamp H1 will light up and will glow for as long as button is pressed S1. All attempts to ignite at this time the lamp H2 with the button S2 inconclusive. The fact that the silicon transistor is opened when the voltage across its base-emitter transition is greater than 0.6 V. since in the saturation mode the voltage drop at V1 is less than 0.3—0.4 V, this value is not enough for opening the transistor V2. That is why the second lamp to light impossible.
If the first button is pressed S2, the lamp will light H2, and then it is impossible to light a bulb of H1. In other words, illuminates the lamp, the button of which is pressed first.
When both buttons are released, the lamp goes off and the device consumes almost no current. Therefore, the power switch is not needed.
In the electronic game is allowed to use only silicon transistors with low saturation voltage, for example, КТ603 with any alphabetic index. If it works clearly, you should pick up the resistance of the resistors R1, R2 to open the transistors, the voltage drop does not exceed 0,3—0,4 V. 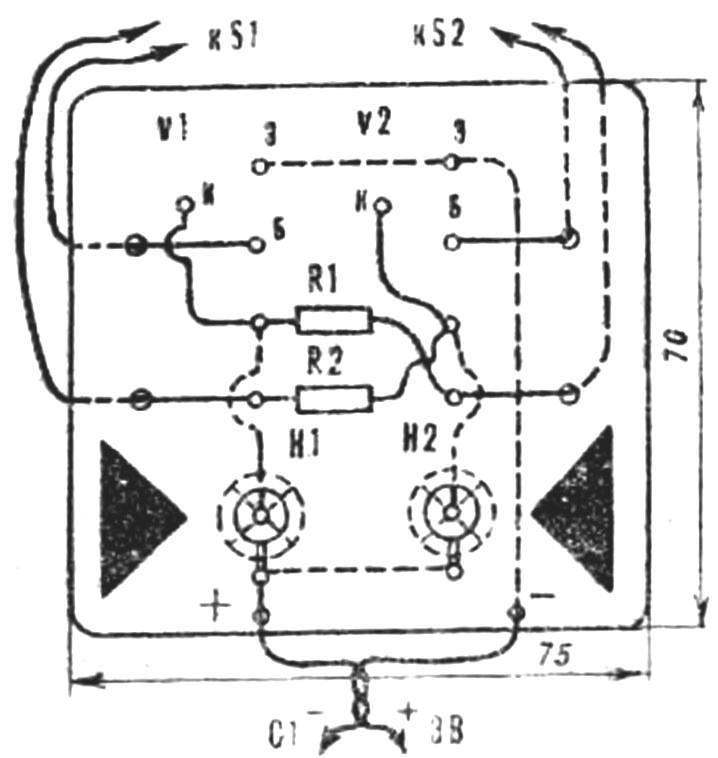 Fig. 2. Wiring diagram of the first version of the game. 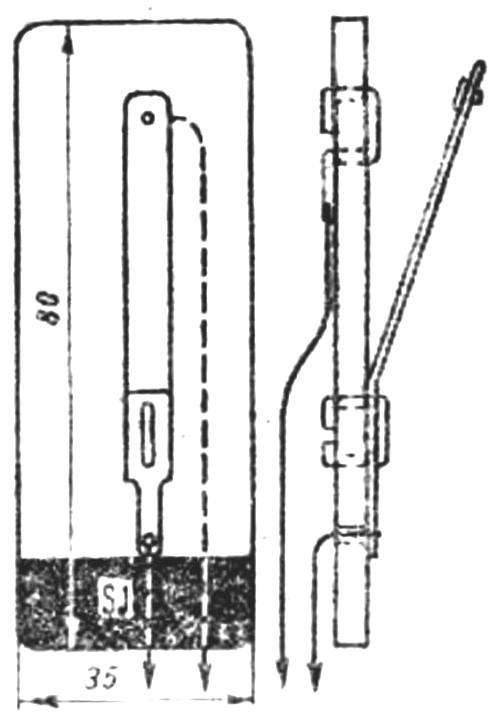 Fig. 3. Button design
The device is assembled on glinkovo Board with a thickness of 2 mm by the method of surface mounting on the racks 10 (Fig. 2). The lampholders are made of bare copper wires Ø 1 mm.
The design of the buttons is shown in figure 3. Bulbs painted red and green (blue) colors of glue BF-2 with the addition of colour pastes for ballpoint pens. The corresponding color marked buttons.
Option II — on the LEDs. Instead of tubes N1, N2 (Fig. 1) you can use more modern devices — LEDs, easytimeline resistors R1, R4 (Fig. 4). Shunts are needed for the transistors to work at relatively high current (about 100 mA), and the saturation voltage was not more than 0,3—0,4 V.

Fig. 4. The scheme of the game with the use of photodiodes. 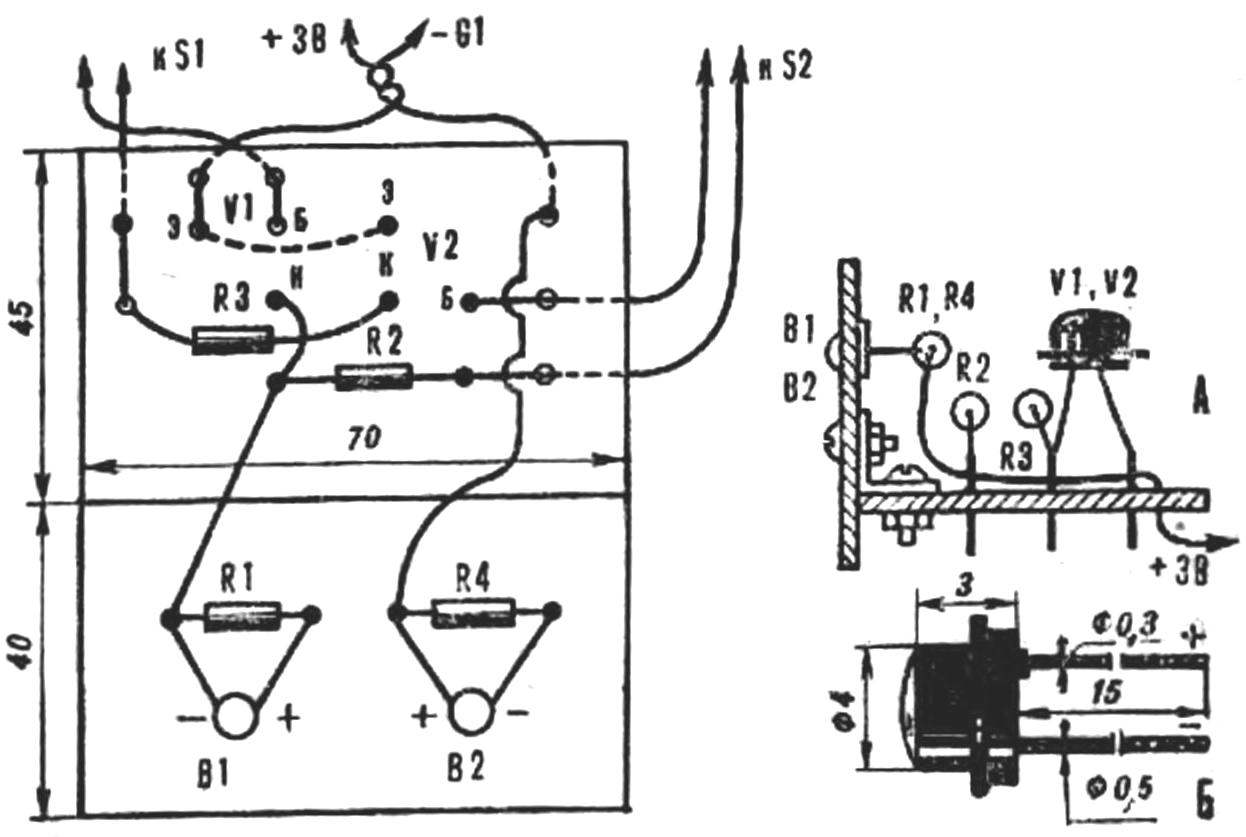 Fig. 5. Wiring diagram of a second embodiment of the game. A — side view, B — led AL 102.
Suitable LEDs АЛ102А, АЛ102Б or АЛ102Г (red) and AL 102V (green). The gaming device is made on a corner of the chassis, composed of two boards of size 70Х40Х2 mm (Fig. 5). Installation of hinged. Food — two elements 332.
Option III — on the thyristors. The first two versions of the game with their extreme simplicity and availability is a serious drawback. If a player’s hand, press the button first, accidentally falter, and the second button when it is closed, flash lamp of the enemy, and then there is a disputable situation.
The device, made on thyristors, there is an obvious advantage. If this is enabled the control pulse, the thyristor remains in this state until while they will not remove power. In short, at least enough for a moment to press the button and release it will turn on the corresponding lamp, which can be redeemed only with the help of a special button “Reset”.
Enough momentarily press button S1 or S2 (Fig. 6), to the control electrode of thyristor V1 (V2) enters the opening voltage of the battery and the lamp H1 or H2 is ignited.

Fig. 6. Playing on the thyristors. 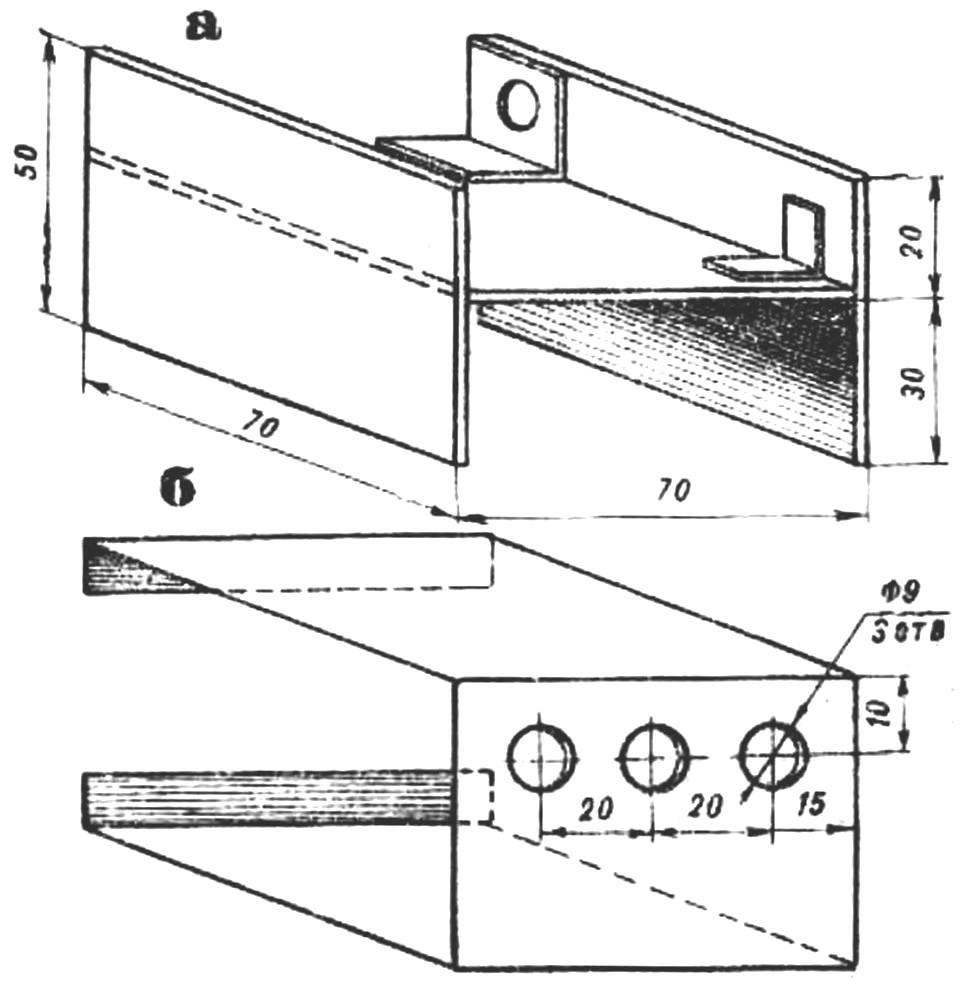 Fig. 7. The chassis and casing. 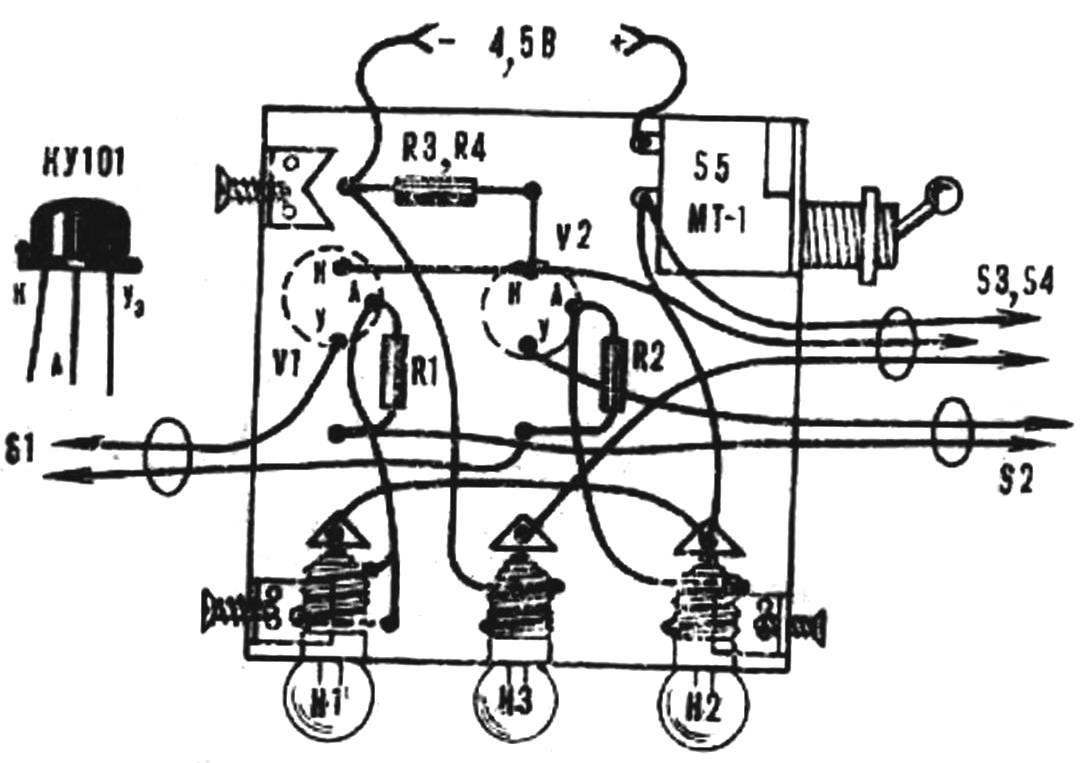 Fig. 8. Wiring diagram of a third variant of the game. 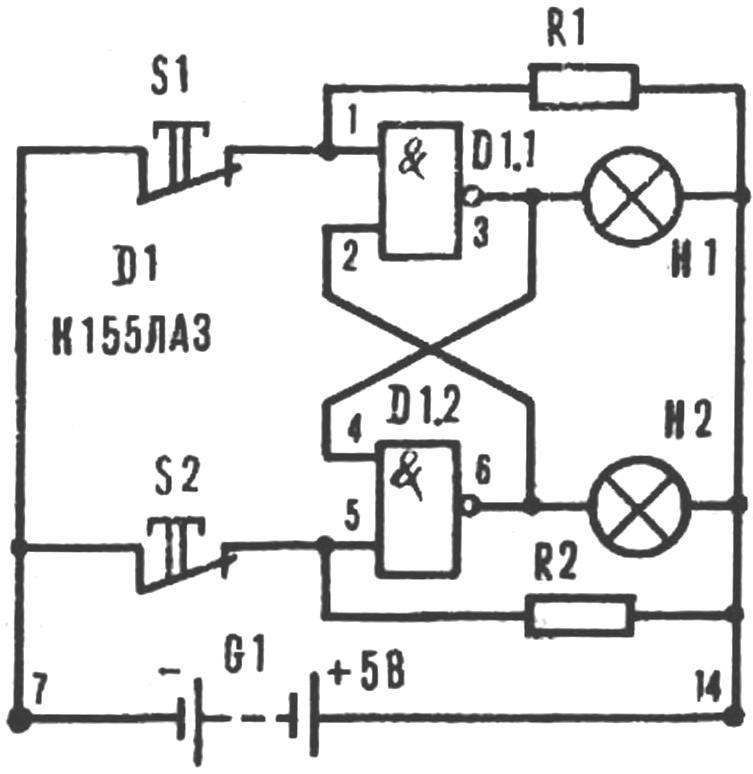 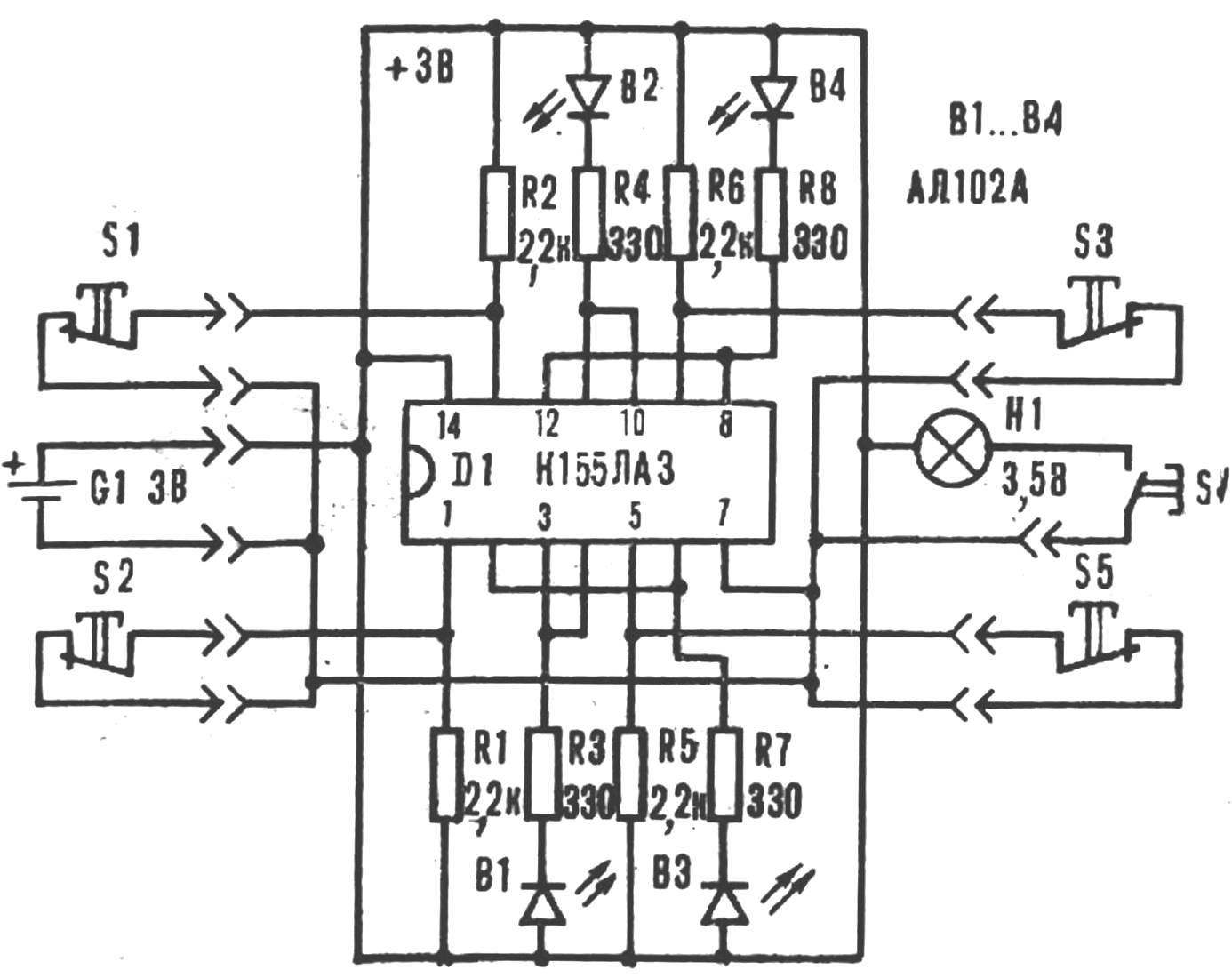 Fig. 10. Playing in TTL.
To reset signals turn off the switch S5 supply voltage with thyristors: then they will return to their original closed state. The same operation is carried out Z button located on the panel of judges in conjunction with the S4 button (“start”). When the contact S battery G1 is the two parallel resistors RZ, R4, and both thyristor are completely disconnected: the lamp H1 or H2 goes out.
The device is assembled in the H-shaped chassis made of three boards and retinectomy closed casing (see Fig. 7).
Lamp and button players painted respectively in red and green. Starting light is white. The installation is made on the “studs” hinged manner (Fig. 8).
The rules of the game “Who is faster?” is simple. Two players sit down at the table and everyone takes your button. The judge gives the command “Ready” and after a while presses the “Start” button. Lights white bulb H3. On this signal the players push their buttons. The one who will light the bulb, wins 2 points. But if any of the players press the button until “Start” signal, he receives one penalty point.
Option IV — on-chip TTL. The same game can be built on a more modern components — integrated logical chips, for example, К155ЛАЗ (К1ЛБ553).
It is based on a simple RS-trigger executed on two logical elements 2I-NOT (Fig. 9). When keys S1 and S2 are closed, both inputs of the trigger there is a logical “0” and outputs a logical “1”: lamps H1 and H2 do not burn. If one of the keys, for example S1 will be opened before the other, on the upper input trigger will be a logical “1” and output logic “0”. As a result, light turns on N1. Now the state of the switch S2 will not influence the trigger and the second indicator H2. you can’t light until the key S1 is open. If the first will open the switch S2, the lamp will light N2 and the influence of key S1 will be eliminated.
In the initial state of the trigger circuit simultaneous return of both keys.
Version of the game on the chip is presented in figure 10. Can play simultaneously two pairs of players (the keys S1,S3 and S2, S5). The command “Start” gives the judge by clicking on the button S4. Light the lamp H1. Since the low-power chip, used for indication LEDs B1—B4 with current-limiting resistors R3, R4, R7, R8.
The device works well at a voltage of SV, so it have enough power two dry cells of any type or one battery 3336L.
Game design and programming buttons S1—S5 can be any.