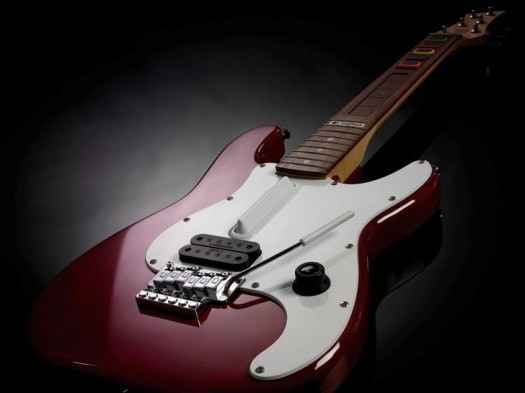 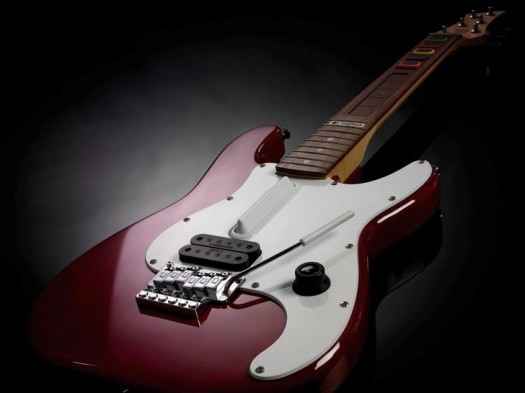 Amplifiers loved by many musical instrument — the electric guitar created a lot. Including the so-called effect of “distortion”, the essence of which is to limit the primary sine wave top and bottom, resulting in a large number of odd and even harmonics that give the sound of the solo guitar special melodiousness. About the original circuit solutions, allowing you to create in a home workshop good-quality amplifiers with the effect of “distortion”, repeatedly reported by its readers and “modelist-Konstruktor” (see, for example, No. 8’80, 2nd’88 magazine).

I have also developed electro-acoustic unit (AAA), which at its low weight (about 2.9 kg) and is acceptable to modern equipment dimensions (mm 315x190x105) allows standard electric guitar to a very nice melodious sound. The maximum output power used by the dynamic head is approximately 5 W, which provides enough volume of game in a relatively large room or a small lobby. High performance of the unit, the availability of the same designs even for beginners homebrew is largely attributable to the use of modern element base, including many recognized kit “Start-7173” with chips К548УН1Б.

As can be seen from the analysis of an electrical circuit (Fig. 1A), at the entrance offer me a home-made EAA “working” built-in pre-amplifier for analog DA1, DA2 (used one channel of the Board named above radiokonstruktor). Followed by amplitude limiter diodes VD2, VD3, which gives the sound of the solo guitar melody (the effect of “distortion”), and the power amplifier. Last on the transistors VT1 — VT5, which are easy to install on the popular radio design with combined output cascade loaded on the low-frequency (5ГДШ-4) and high frequency (1ГД-48) speakers.

AAA, powered from AC mains via a transformer T1 and a rectifier (diode bridge VD5 — VD8 with bolsaescola capacitor C18). The depth of effect “distortion” is adjustable by the variable resistor R10, the sound volume “shells” R16. Fixed resistors R26, R27 facilitate the thermal regime of the transistors amp, a R17 serves to better match the amplifier’s input power with the output of the amplifier. Load of the power amplifier is the main speaker 5ГДШ-4 and parallel connected for better reproduction of high frequencies (through the condenser C17) dynamic head 1ГД-48. 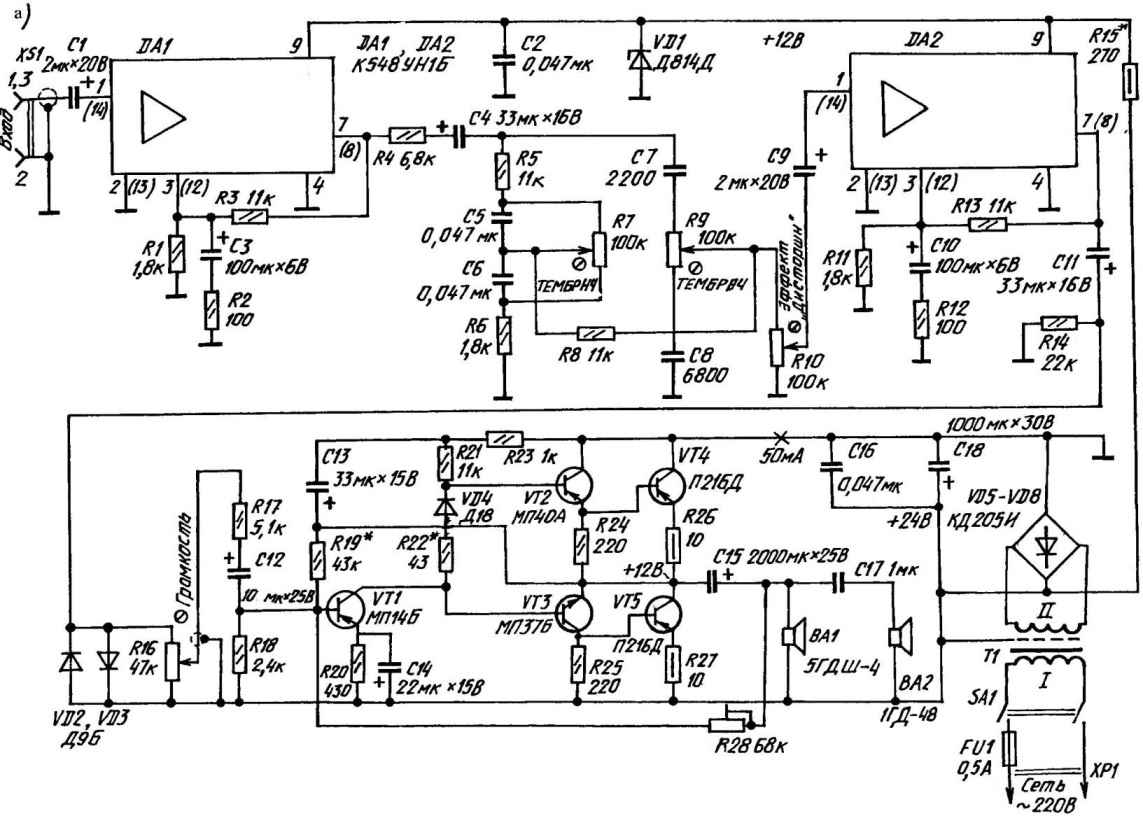 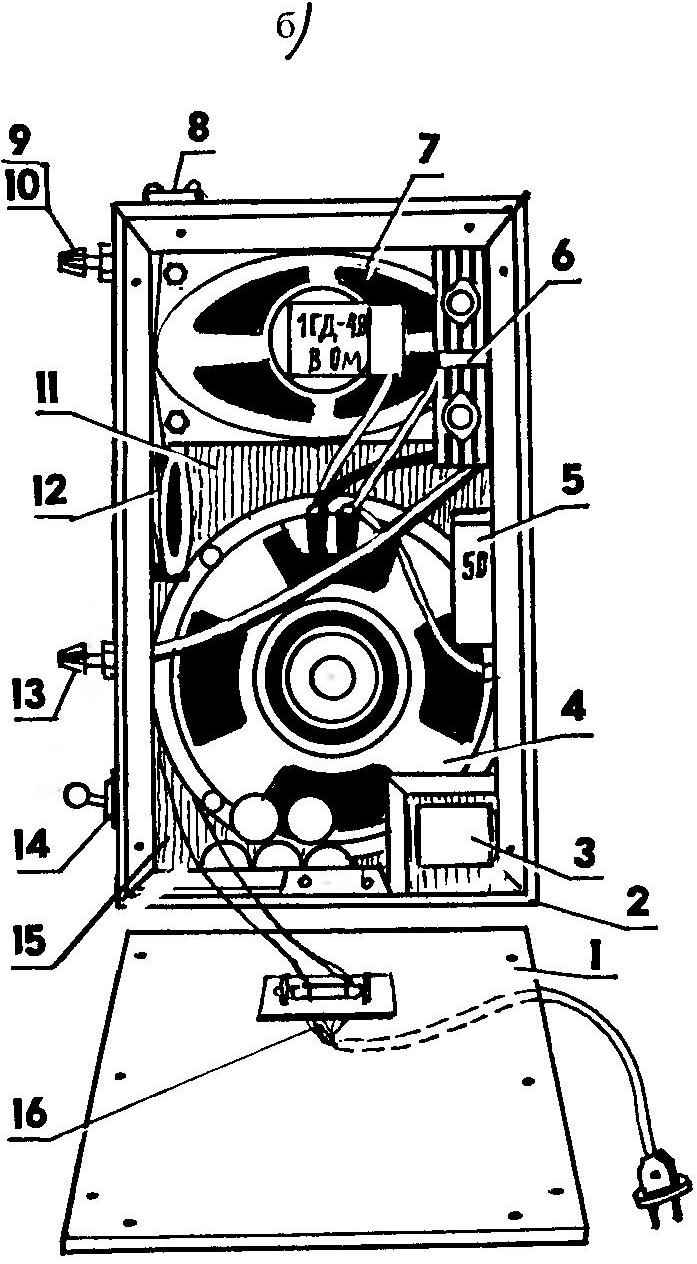 Fig. 1. Electrical schematic (a) and arrangement of the parts and components of (b) a portable acoustic Assembly with the effect of “distorsi” for electric guitar:

Pre-amplifier powered by a parametric stabilizer resistor (the resistor R15, the diode VD1); capacitors C2 and C16 — lock. Between the primary and secondary windings of the power transformer is wound a screen winding, which is used to mitigate interference from AC mains.

Preliminary and final amplifier, loudspeakers and power supply unit are preferably mounted in a single housing, using common and inexpensive electronic components. In particular, it is recommended to use fixed resistors MLT, or even “ancient” VS the corresponding values of capacity and dispersion. The same approach for the selection of the installation in relation to the variables (SDR-33-32, JS1) and a trimmer (GPA-16, GPA-38 or their least known counterparts) resistors and all capacitors.

Transistors VT4, VT5 installed on the radiators 40×35 mm with the thickness of the base 2.5, and 5 mm and transverse cooling fins with a width of about 10 mm.

Д814Д Zener diode (VD1) without any problems replaced by Д813. Semiconductor diodes VD2, VD3 can be any from the D2 or D9, but preferably with the same name. Well, VD4 select the type D7, D18, D20 and other germanium diodes. Valves for bridge VD5 — VD8 fit from КД205 or similar, designed for a rectified current of at least 0.5 A.

As T1 is used by the security man from long ago is considered outdated electrophone “Youth” (the yoke of the plates of transformer steel, which has Windows 38×16 mm, package thickness 40 mm) with completion of: the primary winding is added another 350 turns of wire PEL-0,25 — this leads to a marked decrease of the former buzz with a frequency of 50 Hz. It is also introduced and an electrostatic screen composed of a wound in a single layer of wire PEL-0,1 (PEL-0,2) or open loop copper foil. The secondary winding is 150 turns of PEL is 0.5. 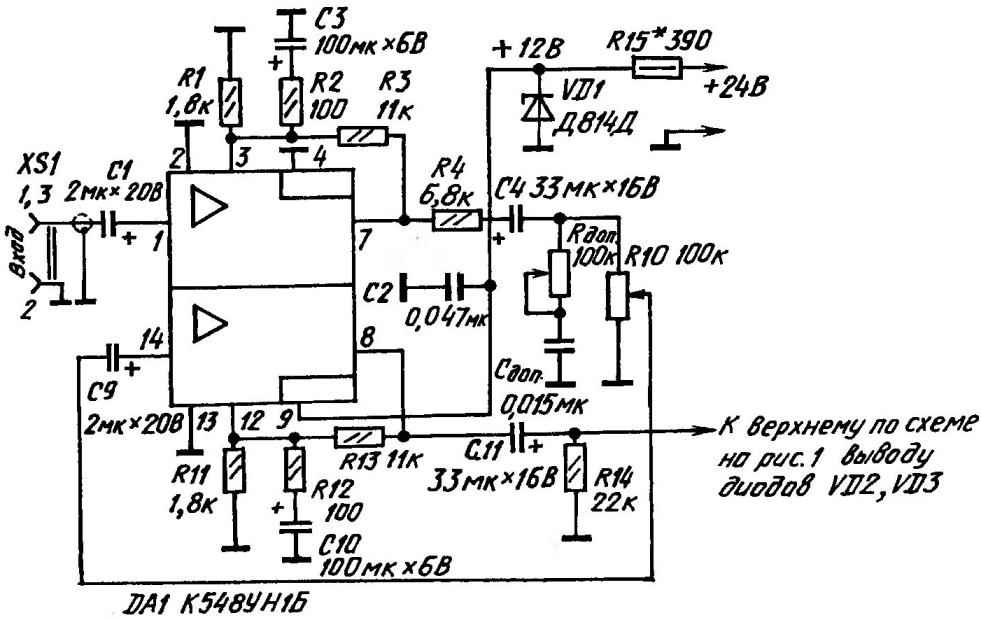 Of course, it is allowed to use any other ready silovik with a voltage at the secondary winding of about 18 V At a current of 0.5 A. However, it is possible (and in some cases even better!) to make the above-mentioned magnetic core brand new the transformer T1. The primary winding should include the 1570 turns of wire PEL of 0.25 (when the network power supply standard 220 V). To reduce the buzz ends of such a “strongman” be covered with a thin layer of clay, and the extreme joints of the plates laterally lubricate the molten rosin. Screen and “secondary” are similar to those discussed above. Between the screen and the windings necessary one or two layers of insulation (La kodani, thick paper).

The location AAA with speakers and power supply in one housing (Fig. 16) it should be possible to remove the input circuit of the preamplifier from the mains wires, transformer and routed to the speakers. On the side wall it is reasonable to infer the switch SA1 is the inclusion of the unit in the network, handle control (R7, R9, R10, R16) and the socket XS1 type GPA. Speakers mounted on the front panel and draped (or covered with facing bars). Instead 5ГДШ-4, you can use other dynamic loudspeaker, for example, 5ГДШ-1 (DDG-Э8Е), 5ГДШ-2 (old designation DDG-40), and as 1ГД-48 — “peepy” 1ГД-40, 1ГД-28 or their equivalent.

When creating a booster-amplifier resistor selection R15 achieve placing a +12 V relative to the common wire on the top according to the diagram output of the Zener diode VD1. The selection of resistors R19 and R22 are regulated: the voltage at the point of symmetry of the amplifier (the collector of transistor VT5), which should be approximately equal to the voltage of the power amplifier (in this case, accordingly, +12 V) supply +24 V and a quiescent current of the output stage. It is recommended that the latter were not more than 60 mA, even better, within the limits of 45…50 mA. If the quiescent current is very large, it is necessary to turn off AAA from the network and carefully checking the installation to fix it.

Before the establishment of the already mounted electronic-acoustic unit resistor R28 sets the maximum and then pick it up such that when a sufficient volume sound without distortion. In the absence of “podstroechnye” of the desired value it is replaced (at least!) a regular resistor type MLT-0,25. The value of the order of 18 ohms. In the final configuration, and in the course of playing the electric guitar with AAA high frequency tone control R9 set at low, and the low-frequency R7 — roughly in the middle or close to it position.

The preamplifier can be performed on a single chip К548УН1 with any alphabetic index (Fig. 2) or even on two “operationtag” КР538УН1 —given the fact that they have a different than on a variant of the circuit diagram Pinout. And in any of these cases, the elements R5 — R9 and C5 — C8, compared with Fig. 1A, can be easily avoided: with the replacement of Rдоп and Stop and a significant simplification of the circuitry (Fig. 2).