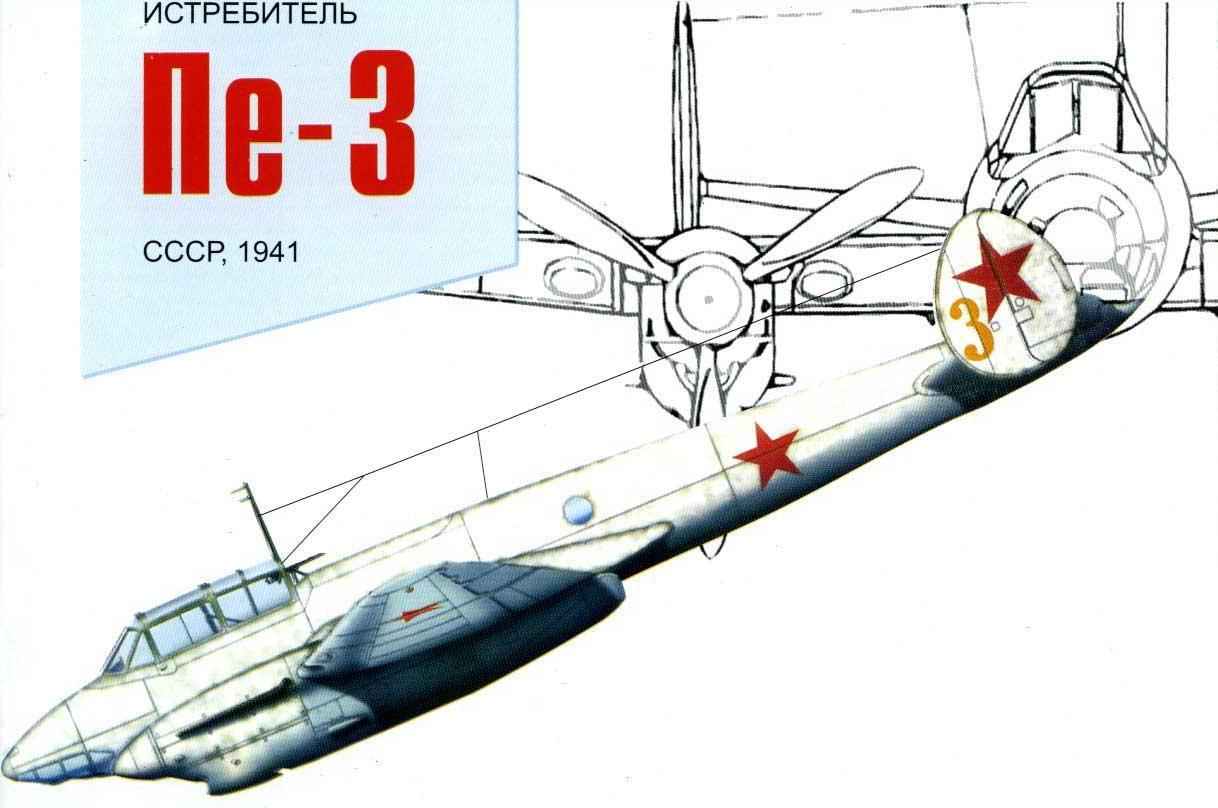 In the summer of 1941 the Soviet air force was required loitering interceptor, designed to combat bombers and scouts of the enemy. To do this, the aircraft was only possible on the basis of serial cars. So we stopped at the “last fighter” front bomber the PE-2.

The decision of the State Defense Committee dated 2 August 1941, Moscow aircraft factory No. 39 was ordered in the period until August 6 to make a fighter variant of the PE-2 bomber. Only four days were allocated for work related to radical change in many important systems, e.g., fuel, rework weapons facilities and radio equipment. And here on 7 August, the first prototype twin-engine fighter later designated PE-3, in accordance with the existing order – to give the fighters an odd ordinal numbers in contrast to the aircraft of all other assignments – took to the air under management of the factory test pilot, major Fyodorov. You can hardly find in the history of aviation another example of such efficiency, because between ordering the machine and output it to the state tests took only seven days. 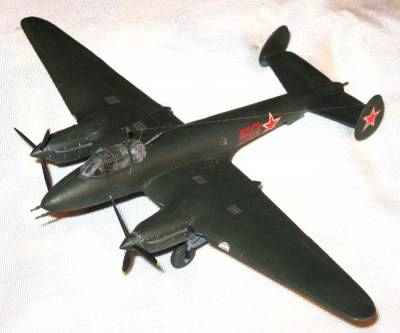 The fighter stepped up a few offensive weapons, placed in the forward fuselage for more gun BK 12.7 mm ammunition 150 rounds. Thus, bow-missile setup of the prototype consisted of two heavy machine guns BK and one ShKAS with 750 rounds. Serial PE-3 machine gun THTAS removed, but increased the ammo for BC to 250 rounds per gun.

The top turret of the Navigator with a machine gun ShKAS has no changes from PE-2. As ago-down to fire there was no one, remembered spent for high-altitude fighter “100” fixed tail installation ShKAS machine gun with 250 rounds bicompactum, which was mounted in the tail cover of the fuselage. Bomber installation radically simplified.

The prototype, converted from the already completed production of PE-2 bombers, had a serial number 391606 (which meant sixth plane the sixteenth series of the plant № 39), weighed for 7860 kg. empty Weight was 5890 kg. On the tests in NII VVS red Army managed to obtain the following basic performance characteristics: maximally speed at an altitude of 5000 m – 530 km/h ceiling – 8800 m and a maximum flight range – 2150 km. this data is considered satisfactory, and on August 14 factory No. 39 was ordered to deploy the serial production of PE-3. The terms of implementation of newly established is very tough. By August 25, the plant had to assemble 5 planes in the sample experienced, and from that day to fully switch to the production of PE-3. 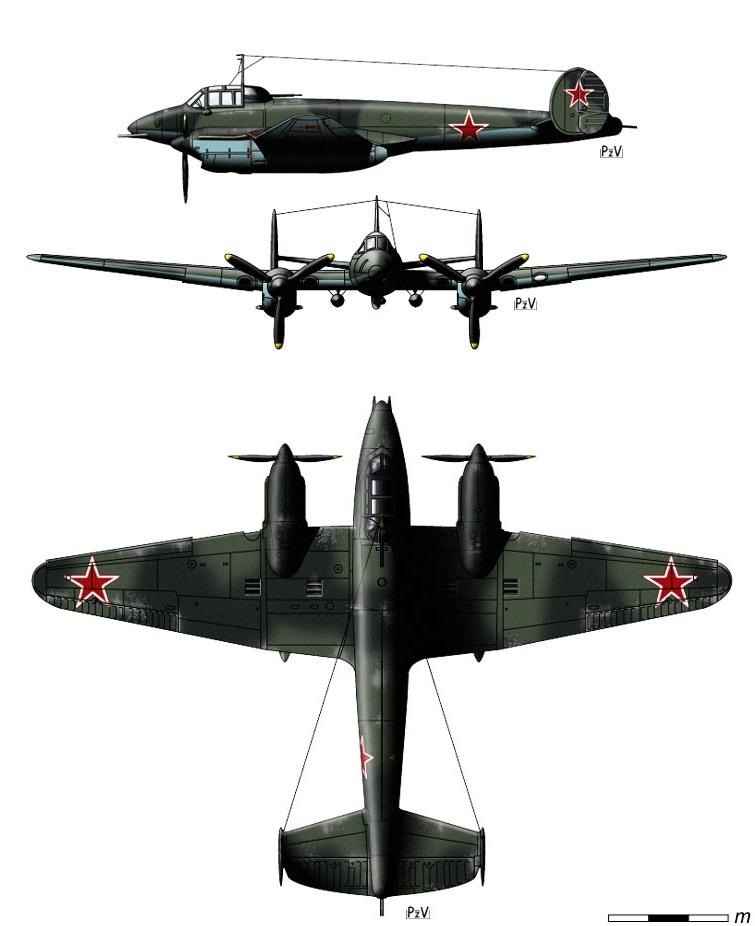 Before you begin assembling the model, You should choose the complexity of the build model: You can build a model with a transparent (open or closed) or an opaque canopy, or with retracted landing gear, moving or stationary elevators, the turn and the ailerons.

To work You need to prepare the workplace and tools:

1) clean the smooth surface (plastic plate or sheet of plexiglass);

2) cutting tools: scissors, cutter (can use a paper knife or a razor blade);

5) wire thickness 0.5-1.0 mm or toothpick (for the axis of rotation of the rudders and ailerons).

There are three main construction methods:

1. Assembly based on the “ship” frame, which is mainly used when building models of large dimensions.

2. Modular Assembly in which each section closes with the two sides of the frame, thus forming blocks. Ready-made blocks glued together to obtain a fuselage or other aircraft components. This requires careful adjustment of the two neighboring frames. For those who want to build a model this way you have two sets of frames.

3. The Assembly by gluing, which is described in this manual. Bonding is suitable for joining parts and sections are indicated by and double rooms.

The ASSEMBLY of the PROPELLERS (Fig.1)

To start gather with gluing spinner, don’t forget to paste the frames. Now cut parts of the screw; the blades should be given a convex shape, prokatov them along, for example, ballpoint pen. For rigidity possible along each blade to stick out. Ready screw attach to the frame, then screw with the frame insert in the fairing. If You want to make a rotating screw, in the center of each frame hole and into the holes: glue the axis of the wire or toothpick.

ASSEMBLY of the FUSELAGE AND the COCKPIT (Fig. 2, 3)

The wing model consists of a power frame (spars and ribs), skin, flaps and ailerons, as well as parts of the water radiator and landing lights. Designations: L – detail of the left wing R – right wing

Diagram of the frame shown in Fig. 4. In Fig. 5 shows how to assemble the frame, trim, radiators and headlight together. In detail, 46L, 46R, 58L, 58Р should make the slots for water radiators.

ASSEMBLY of the TAIL (figure 6)

The tail Assembly consists of a frame stabilizer spars (projections of the frames) and nervures; frame tail fins, stabilizer and plating of the keel, rudder height with ribs and rudder with ribs. It also includes the axis of the rudder (for right and left rudder) and the rudder. For the axles used straight segments of wire with a diameter of 0.5 mm. the Diagram of the Assembly of the tail shown in Fig. 6.

On the model two engines, and hence two nacelles. Conditionally divide them into two parts: front (screw, engine compartment, exhaust pipes, oil coolers) and the rear (wheel well and bomb Bay doors). The General scheme of the Assembly and arrangement of parts of the nacelle shown in Fig. 7. If You build the model with landing gear, then use Fig. 8. Figure 9 shows how to assemble main wheels. The same is going and the tail wheel. Bomb Bay can be done with open doors and hang them inside the bomb. Parts of the right and left engine nacelles and undercarriage, not identified as L and R, suitable for both right and left side.

Guns should be collected before assembling the cockpit and fuselage. Their arrangement and Assembly diagram is shown in Fig. 10. The armament consists of 1 cannon ShVAK 20-mm (forward fuselage, bottom), 2 machine guns BC 12.7-mm (in bow) and 1 machine gun ShKAS 7.62-mm (in the cockpit of the Navigator-arrow). Bomb armament of the aircraft consists of two bombs FAB-250 under the wings of the aircraft and two bombs FAB-100 in the bomb Bay of the nacelle.

The materials to build a model FIGHTER PE-3 (download)