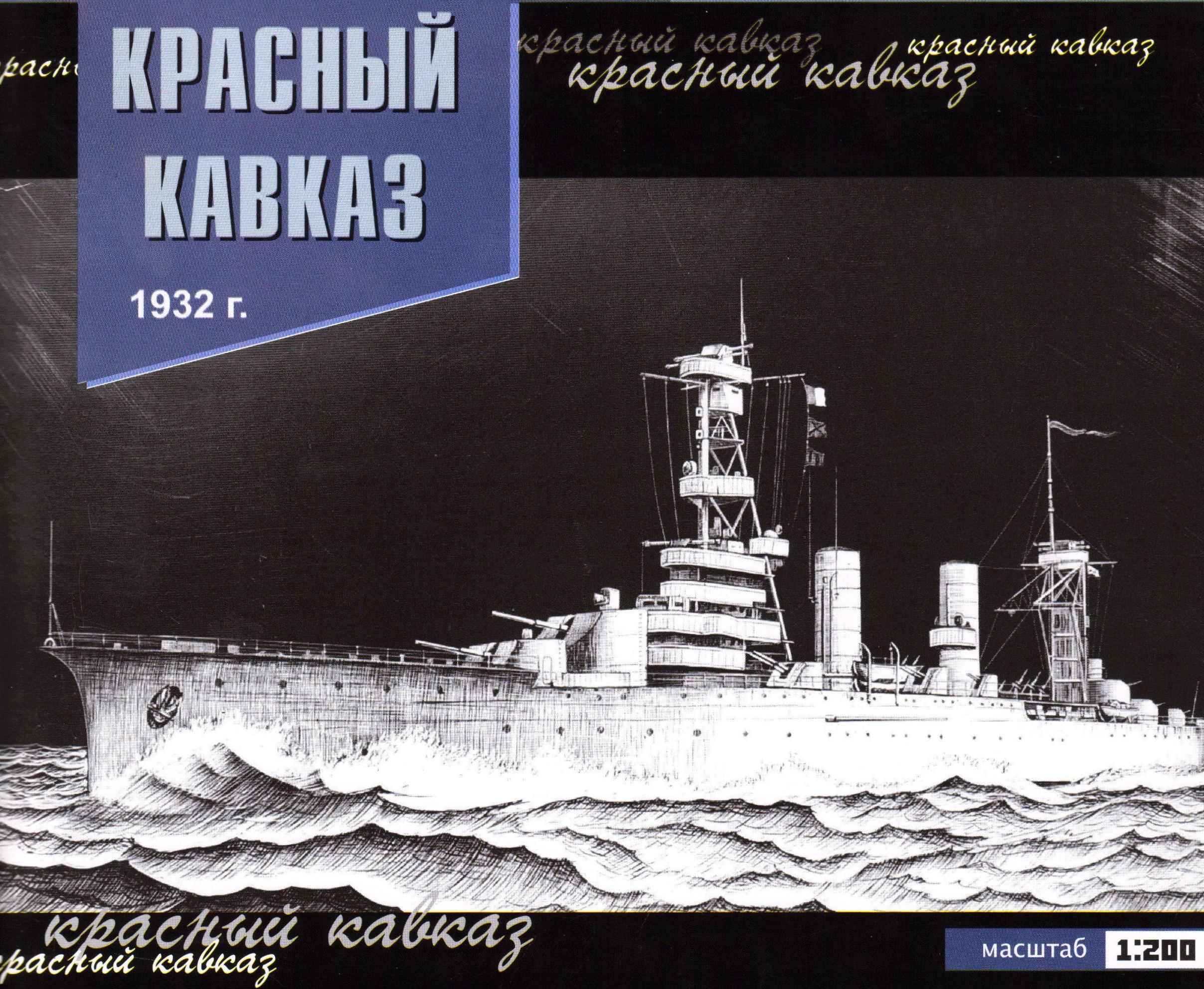 The history of this ship began on the eve of the first world war. 18 Oct 1913 in Nikolaev, the laying of two light cruisers. One of them, which later became the “Red Caucasus”, was named “Admiral Lazarev”. The hull was launched only on June 8, 1916, but in tsarist times, was never completed. Completely deserted, he stood at the outfitting of the wall of the plant. Only in September 1927 on the deck covered with rust and overgrown with weeds cruisers again ascended workers, shipbuilders, engineers and red wormery. But it took more than four years before the ship, renamed on 14 December 1926 in “Red Caucasus”, has departed from the pier of the plant. Successfully passing all the stages of acceptance tests, re-built cruiser 25 January 1932 came into operation.

In 1933, the “Red Caucasus” went beyond the Black sea and caused friendly visits to ports in Turkey, Greece and Italy.

During the great Patriotic war the cruiser under the command of officers of the A. M. Gushchin and V. N. Eroshenko successfully smashed the hordes of Nazi troops near Odessa and Sevastopol, Feodosia and Novorossiysk under.

For the first time the main guns of the ship spoke in a loud voice September 11, 1941, when the cruiser brought down fire on the positions of enemy troops stationed in the village of Ilyinka, near Odessa.

On the morning of 21 September, “Red Caucasus” took on Board 696 soldiers and commanders of the 3rd black sea marine regiment and the flag of the brigade commander of the cruiser captain 1st rank S. G. Gorshkov, the head of the squadron went to sea. The squad had to arrive to the village of hryhorivka and at dawn the next day to attempt a landing of tactical landing. Without opposition, the enemy, our ships at night began landing troops on shore opened a devastating artillery fire.

By 4 o’clock in the morning, performing combat tasks, “Red Caucasus” weighed anchor and went to Sevastopol.

The first half of October 1941, the cruiser was filled with constant trips between Odessa and Sevastopol, participating in the evacuation of troops of the Odessa defense area. Followed by military transport from Novorossiysk to the main base.

The most vivid page in the history of this legendary vehicle, perhaps, is his part in Kerch-Feodosia amphibious operation. On the evening of 28 December 1941, taking on Board the 1853 paratrooper, a battery of three-inch guns, 15 vehicles and other military equipment and food, “Red Caucasus” at the head of the squad left the Novorossiysk Bay and arrived early the next morning in the Feodosia Bay, first opened heavy fire at the port facilities, railway stations and marinas. The cruiser began mooring to the wall of a Wide pier, but the sudden gusts that reached six points, squeezed the hull of the ship from the pier. Enemy shells and mines exploded close alongside, showering the cruiser in a hail of shrapnel. Following an attempt to make the mooring line with the boat also failed. Then the commander of the cruiser decided to implement the mooring is not with the external and internal sides of the brekvater. After the cars back up, “Red Caucasus” slowly walked to the Harbor, in the midst of the fire. Direct hit mines reversal signal bridge. The flames had reached the ship. Meanwhile, the Marines thrown on the left side the ladder was jumping on suitable boats and barges and rushed to shore. Guns and machine guns of the cruiser were heavy fire on the embrasures of the enemy firing points. The second artillery tower in a matter of minutes, swept a column of tanks headed to the port. Volleys another tower was detonated a large ammunition dump, and universal settings set on fire railway tanks of gasoline.

With the dawn of the battle in Feodosia is even more intensified. To fire at ships

standing on the roads and at berths, joined by heavy coastal battery of the enemy established at Cape Ilya. Every minute Parking at the pier has become dangerous. Two hours in the cruiser was hit by 13 shells and 7 mines that have caused it 7 fires. The sides and apps were gaping holes, patched improvised means, but main and auxiliary machinery remained in the ranks.

The next day, after 25 group and single attacks of enemy aircraft and doing the job, “Red Caucasus” went to Tuapse. But this time Parking of the vehicle was short-lived. At midnight the new, 1942 the ship was transferred to Novorossiysk and, taking on Board the 12 anti-aircraft guns, 10 trucks, 2 tractor and 1200 personnel of the red Army, on the morning of 4 January, newly arrived in Feodosia Bay.

Quickly submitting moorings, the sailors immediately started unloading. Here the ship’s boom lifted the last gun, but at this moment the air seemed 6 Nazi bombers. Despite intense anti-aircraft fire, one of them broke through the veil of shells, but immediately fell into the water. After a few seconds, the same fate befell the second. But still 4 enemy bombs exploded at the side of the cruiser. In the rear of the hull formed 3 huge holes and it was filled with water.

No sooner had the cruiser to go on the RAID, as he was attacked by a large group of “Junkers”. Wounded, “Red Caucasus” has again entered into an unequal battle with the enemy. But another bomb exploded nearby. The stern of the cruiser was thrown out of the water, tore off the right screw and the bracket of the left propeller shaft, bent and jammed the steering gear. The ship took about two thousand tons of sea water, sediment increased by 5 meters, and the deck up to the fourth tower disappeared in the waves. Almost the whole day in this state was “Red Caucasus”, yet through a storm and a Blizzard came in Tuapse, and two days later, in Poti for repair.

3 April 1942, for the shown courage in battles against the Nazi invaders, for the strength, courage, discipline and organization, for heroism by personal order of people’s Commissar of the Navy, the crew of “red Caucasus” was awarded guards status.

By the time the ship has completed 30 combat missions of command, including 9 – for fire support of land forces, participated twice in manasarovara actions. After about 14 thousand miles, “Red Caucasus” transported more than 25 thousand fighters and commanders of the red Army, wounded soldiers and evacuated citizens of Odessa and Sevastopol, delivered to the front line to 200 wagons of ammunition, escorted 6 transports with troops and military equipment. The artillery of the main caliber and universal cruiser spent 32 fire RAID on Nazi positions, destroying 16 and suppressed enemy artillery and mortar batteries, scattered, and destroyed up to 5 battalions of infantry. The gunners of the ship reflected the 67 attacks of Nazi aircraft shot down 3 aircraft.

By late summer 1942, the cruiser after repair was able again to go to sea. Several months passed and “Red Caucasus”, heading a detachment of naval support provided the landing at Novorossiysk.

The fighting has died down… Many years have passed since then, as retired legendary ship, but his fame lives in the Affairs of the sailors, sergeants and officers of the guards crew of the large anti-submarine ship, the inheritor of a proud and glorious fighting traditions of the “red Caucasus”. 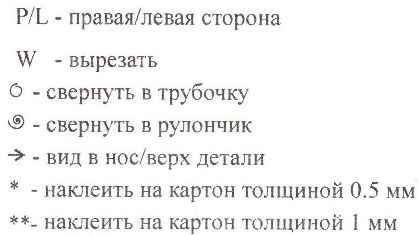 Model production is simple, but requires a lot of attention and patience, as it has a large number of small parts. Part of patterns for more accurate Assembly is printed on thin paper. For bonding large surfaces of the frame and frames it is advisable to use the adhesive rubber-based (“Budeprion or along slender projection”),

Particular attention and accuracy is required when assembling the bow and stern of the model due to the characteristic complexity of the case.

To glue the hull skin better with the underwater part in the direction from bow to stern. Preferably, in parallel with Assembly of the lower shell to try a surface part to avoid gaps in the area of the waterline (items 10 and 34). Items 29 to stick on the frame before gluing 24-28 or after, as you prefer. Items 41 to 52-dadude and screws.

With the installation of a bilge keel (det. 53) build the underwater part is over. The beginning of the bilge keel is exactly at the junction of the trim parts 14-15, that is bilge keel begins with parts 15 and ends on details 23; the place of attachment is indicated with a thin serif at the joints of the lower part of the hull plating.

Of part 85 and front of the mast to collapse them into a roll, to impart rigidity. During final Assembly of the front cutting will need to cut the ends of the part 85.

It is recommended to do all the plating on the templates – this will give the model of saturation.

Rangefinders 82-83 exactly the same on the front and back of the cabin, but in the stowed position deployed in opposite directions. 84 – marker lights. Details 85 – fastening elements of the wire frame. The worksheet templates are shown Assembly technology.

Tower of the main caliber, 109-112. It is necessary to pay attention to detail 110C: that when gluing and the fitting of this part be careful. As described in the instructions, the tower can be done either in combat or stowed position (the instructions are visible differences). In the stowed position, the item 111 is NOT CUT. On request, towers can do the spinning.

Small details are simple, they are well described in the instructions, so much to describe them is not necessary. With the exception of guns of 37 mm (part 168) it is desirable to collect with tweezers in a well-lit Desk. Detail 168k must be bent in half in the place, and glue, after which it should be bent into an arc, for example, the pencil in order to give the desired shape and allow it to dry in this condition. The dried glue will give it the rigidity and the item will be to save the form.

After assembling the housing it is desirable to luted, primed and painted. With the help of rods and wires to show the Windows. At the end of the Assembly, blow out the finished model with paint from the airbrush. If you paint there is no desire, then just pick up some paint to match the trim of the model and touch up the ends and metal parts.

Success in your work. I hope “Red Caucasus” will take a worthy place in Your collection.