As you know, in most classes sports modeling the success of the competition partly depends on the power and reliability of microcomputers mounted on the engine. One of the most effective ways to increase the power of the motor is the use of exhaust energy through resonant pipes. They are widely .used by athletes to improve SSS-Rostik characteristics of models. The proposed materials are considered methods of calculation of length, volume, and other geometric parameters, allowing to improve the characteristics of the resonant pipes (at the end of the article, SPICON see references).
It should be noted that there are several ways the estimated optimization parameters of the pipes. Tan, one of metodin (1) indicates that the length of the pipe can be calculated according to the formula 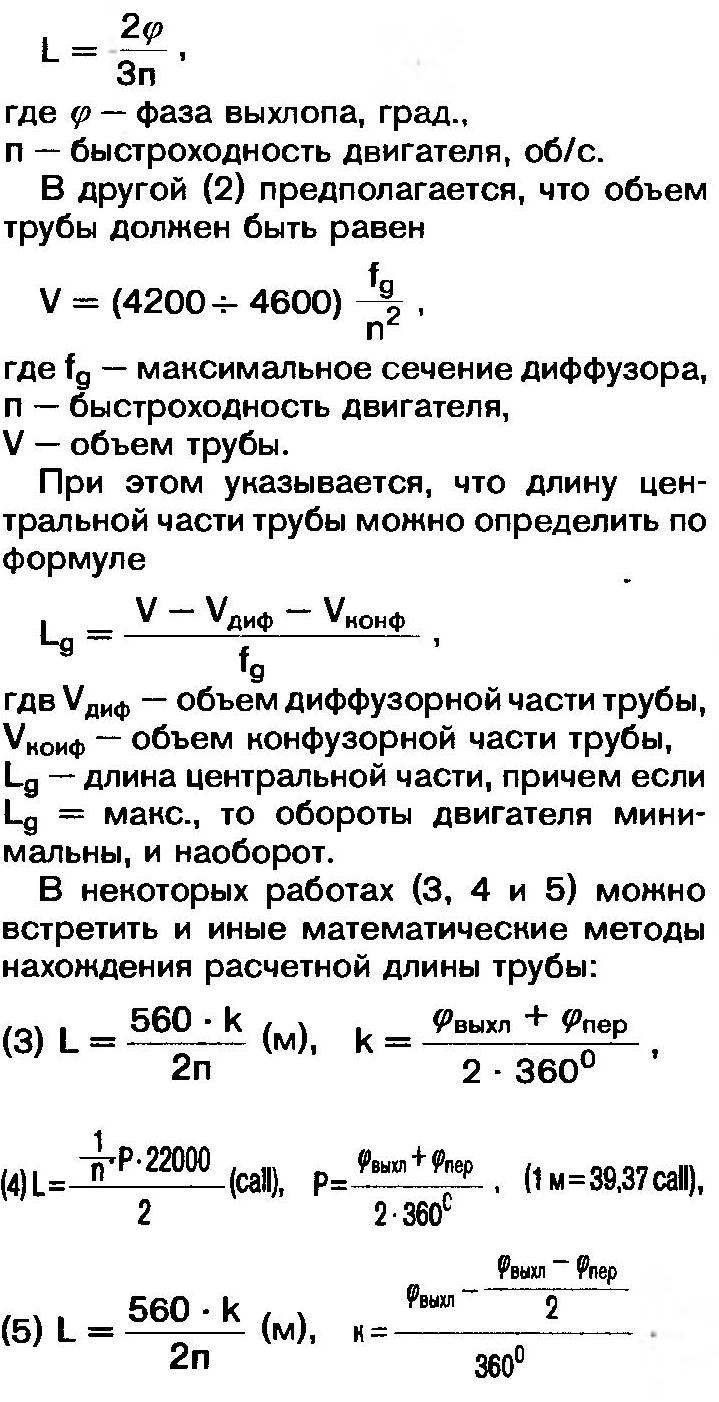 THE GEOMETRICAL PARAMETERS OF THE RESONANT PIPE
(Numbering corresponds to the sequence of the list of the investigated tubes, given in article)

Alphabetic indexing elements correspond to the generally accepted system of measurement of the resonance pipes.
Thus, today, a very popular several methods; however, it is determined by the length of the pipe is approximately the same.
Now consider the dynamics of the pipe of the engine, “Rossi-1Fi” in the phases.-on/off of the bypass, equal 186/130 hail, and the length of the pipe of 0.25 m. the specific Speed calculated using the method of (3), is equal to about 30 000 Rev/min. At the same time rotation of glenvale 1 ° is 5,66-10-6 C. Indicates that stallavena fresh mixture occurs in the 50° — 60° of rotation of crankshaft, that is, approximately (f=1360 counted from the beginning of the exhaust. Then taking into account the speed of compression waves 560 m/s will get the distance travelled by the wave for f=1360, equal to 0.43 m Therefore, the pushing fresh mixture occurs from the beginning of the cylindrical part of the tube and ends at f= 157o. Delay of exit of fresh mixture from the cylinder is 29o (with pressure equalization).
There is another version of the calculation in which the speed of compression waves is different from the specified. Note that the crankshaft rotates at f=186° during 1,05-10-3 C. In this case, the wave speed is equal to 474 m/s (at a temperature of about 290° C). In the illustrated embodiment, the calculation of the compression wave to push the fresh mixture before the end of the exhaust, and the formula proposed in (1) becomes more plausible.
If you carefully to understand the processes occurring in the running exhaust resonance tube, you will be clear — the exhaust gas consists of a compact tube, which has an initial speed of about 623 m/s, then decreasing due to the cooling and the losses associated with the gas dynamics. When you exit probni in diffuser in it formed an intense rarefaction wave. Last, reaching the exhaust window, is reflected as either a pressure wave or a rarefaction, depending on the extent of its disclosure. It should also be noted that propagates through the pipe, the rarefaction wave can appear with the wall of the pipe and at certain angles of the meeting will be reflected and extinguished. Therefore, the negative pressure under certain conditions fades out not until the end of bypass, but before (6).
The gas tube is reflected from the confuser as the pressure wave or, in part, to dilution, depending on the diameter of the end fitting (7). The pipe is a real system, and therefore the movement and the waves of compression or rarefaction is a loss of energy, and the amplitude of the pressure wave pushed the fresh mixture in the engine is less than the amplitude of the exhaust — wave oscillation is damped under the action of a single pulse of the exhaust, but its repetition is resumed (8).
It is also noted that geometry of the diffuser affects the formation of the rarefaction wave and the coefficient of static pressure recovery. Geometry Central insert, and the confuser has an impact on the front and the amplitude of the pressure wave, the attenuation coefficient for an expansion wave and the coefficient of restitution static pressure compression waves (9, 6).
This makes it possible to understand that the differences in the approach to the calculation of the geometry of the pipe cause the need for comparative analysis and choice of optimum variant of the NAS of the pipe itself, the Tang and the method of its calculation.
To determine the best pipe we have investigated the possibility of the experimental method of choice for its sound characteristics — frequency response. Tests of six types of pipes: “Russia-.15, Rossi-. 15 Fi”, CSTOM-2,5, a homemade pipe with stupid confuser, a homemade pipe with a Central plug and a homemade pipe of the “bubble”. Geometrical parameters of pipes are given in the table.
To validate the proposed method were used such devices as a sound generator (ZG) of rectangular pulses with continuously adjustable frequency in the range 800-2500 Hz, oscilloscope with large-scale net, a microphone and a telephone. The technique is quite simple. The phone is connected to ZG and one output — to the input “X” of the oscilloscope; the microphone through an electrolytic capacitor to power supply and input “”; phone using plasticine is attached to the beginning of the pipe and a microphone at the end of the exhaust pipe.
If you change the frequency of the generator on the oscilloscope screen appear figure Lisajo that allows you to compare the phase of the oscillations at the beginning and end of the pipe, and Tangier. to monitor the amplitude of the resonances. For research took on an odd phase of oscillations. The appearance of figures on the screen corresponding to the desired phase, the oscilloscope were transferred to normal mode measurements, which allowed to accurately determine the amplitude of resonant vibrations. At the same time with the goal of fixing the shape of the resonance curve read the wave amplitude in the range 800-2500 Hz. The data obtained is based decanter based on A=f(U). Based on these data selected pipe having a maximum amplitude of the odd phase kolebanii; and a third half-wave enables us to estimate (at frequency of about 1500 Hz) on the stability of the pipe.
The proposed method makes it possible to choose a resonant pipe for a model internal combustion engine for the best power characteristics without time-consuming flight tests, the results of which — and it is very difficult to consider almost always is superimposed the influence of extraneous external random factors.
V. FONKICH, master of sports Ukrainv, Cherkassy.