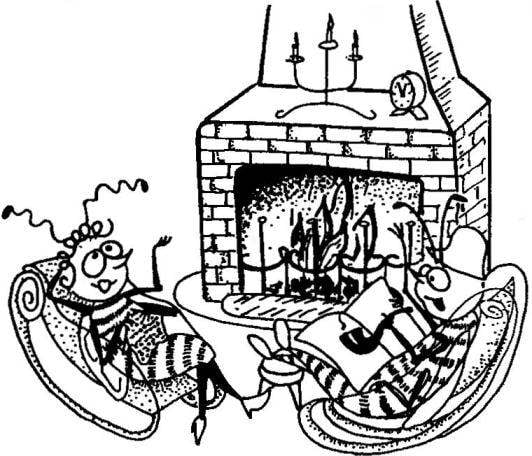 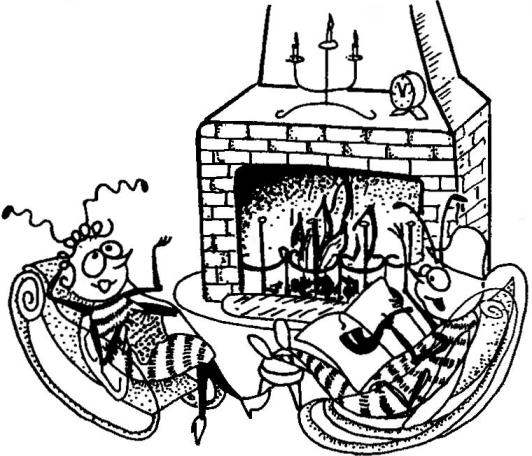 Research scientists and experience of beekeepers show that with a good supply of benign feed and caring the contents of a winged honey bee plants can stand the winter even when severe frosts. After all trouble for weakened bee colonies in the cold season is not so much the reduced temperature, how much humidity, when the frames and the inner surface of hives moldy, and the increase of the thermal conductivity of moist air surrounding a ball of bees, and damp walls threatens to increase in heat loss with all the ensuing grave consequences.

Used by me for several years now measures associated with electric heating in winter, enable you to create and maintain a comfortable environment that ensures the safety of bee colonies any strength. In fact, this system is convective ventilation of hives (WCFU, the term supported by the patent office of the country). Happy to share my developments with the readers of “Modeller-designer”, among which (see №№ 5’73, 6’81, 12’87, 12’92, 10’93, 12’95, 12’96, 5’97, 6’97 and 10’97 magazine) many East Champions beekeeping.

The principle of WCFU’s easy to understand the example of a bee-hive. Warm air rising up from the heaters according to the laws of convection is in the direction conventionally indicated by the arrows, through the lap, insulation and holes in the lid (or through the upper notches) out. When driving in the hive this main thread spawns a smaller convection. Together they perform efficient ventilation. And it is — at a minimum expenditure of energy.
Based on the conditions of comfort, even have the limited ciwt power electric. If, based on the needs of one of the streets of bees it should not exceed 1.5 watts. For example, in my apiary, where each bee family easily tolerate the cold, being located in the housing (eight or nine part 435×230 mm) total power of the two placed at the edges of the winter nests of the heaters is only 8.6 watts.
The breakdown of the already low power of 6.8 and 1.8 W think is successfully found solution. Because it, firstly, allows to significantly simplify the design (the dimensions of the heater are substantially independent of the number of frames in the hive), and secondly, improves the microclimate in the bee colony (exclude the split of the club in the winter thaw, as there is a real opportunity for everyone to go in the direction of a more powerful heat source). Thirdly, the energy flow from radiator is distributed over the entire lateral surface (and not from a point source), providing effective removal of condensate. And in the end really makes the SQUARE system, ensuring a favorable the winter (in the wild, in each individual hive) of the cores and of the families of any force, as evidenced by many years of practice.
For thirty large supply of heaters (number of colonies) recommend are two standard 190-watt transformers ТП190-5, lowering the voltage from 220 V to 40 V. the desired is Obtained even supply of power (need only 204 watts is 380 W), in continuous operation for a 6-month “heating” season is very useful. And parallel connected secondary windings, each of which is made of 1-mm wire and calculated on the allowable current of 1.57 A, capable of delivering a load of approximately 6.3 A. This greatly exceeds the consumed thirty-6,8-watt heaters current (5,1 A), as another key to high reliability large heat sources. 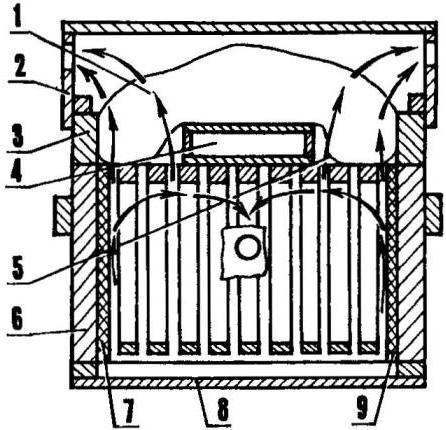 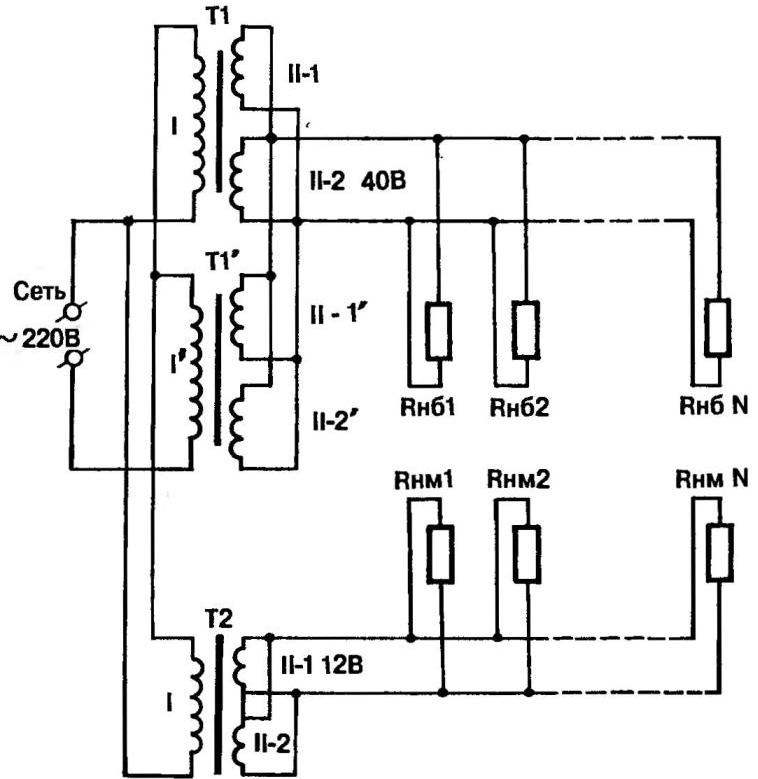 A circuit diagram of WCFU.
But what about the small thermostatically? Making simple calculations according to the formulas of a school course of physics it is easy to calculate that the power of thirty-1,8-watt heaters need a step-down transformer with a capacity of 54 watts, capable of giving the load of 4.5 a at A voltage Of 12 V produced by the domestic industry could not be better suited (if you choose with a stock electrical parameters), the device with 100 watts with two secondary windings in parallel included (each — wire diameter of 1.8 mm is designed for the current of 5.09 And at a voltage of 12 V). In WCFU this transformer will work with more than twice the reserve current in the load!
The design of heater is shown in Fig. In the slots of the base-frame placed high resistance wire, secured the ends to which are soldered flexible insights. Both sides establish the respective panel and knock it all together 20-mm nails after stretching 5 mm hole findings with subsequent attachment of hangers. Out-alevy installation is carried out by insulated wire, the diameter of which select on the basis of current consumption. For the 5.1 And it corresponds to 1.9 mm.
The number of turns of the high impedance winding of the heater and rather easier to determine experimentally. This will require an ohmmeter and the layout of the frame. Size 600 mm approximate, depends on the placed heater calculated resistance (235 Ohms) find as the result of separation of voltage and current.
Before winding should be spread out on the floor in the room of the future wire heater so that its parts never touch each other, and use an ohmmeter to find the right length, focusing on the readings (approximately equal to or somewhat greater than 235 Ohms). Placing the resulting piece on a layout frame (the coils should not touch each other), and fix both ends. But billet connecting the heater to the power source, measure the current consumption. If the obtained value is below the estimated 0.17 A, the number of turns is reduced, if higher, then increase. The reconciled parameter of the heating coil (in my case 51 round) can be used as the core in all subsequent operations.
Made a frame and making it a hacksaw slot depth 3 mm, distributed as evenly as possible resulting winding. If you need some teplokluchenka, the slot is best done by connecting clamps package of 6-7 pieces. Putting verified the coils of high resistance wire on the frame, assemble the heater.
The method of calculation of power system small termostatico and technology Assembly, similar to those described.
Due to the fact that in the manufacture of any heater of this design to fully withstand all the recommended parameters is not always possible (different diameter and resistance of the high resistance wire, additional voltage in the load circuits, etc.), it is expedient to introduce a correction taking into account the maximum permissible temperature.
After determining the number of windings of the heater frame is made to check the temperature of the high resistance wire (you can use a mock framework). The distance between the slits doing as little as possible. But in such a way that after installation of the heating coil sections (disposable and minimum step) do not touch each other. Placing the calculated number of turns of high resistance wire in the slots of the frame, and fix the ends. Gathering and simple installation, connect at an ambient temperature of +20°C of the investigated heater to a power source and conduct the tests.
After 2-3 hours, when the thermal regime can be considered established, take readings of the thermometer. They should not be above +40°C (in my case the temperature is consistently equal to +28°C), with the placement of such a heater in the hive did not die from overheating delayed Queen bee eggs.
In preparing bees for the winter is necessary to place the manufactured heaters on the edges of the slot. From October until the first cleansing of the circling the SQUARE I have enabled, and only when the ambient air temperature in the shade is above +5°C off. But after the cleansing of the flight and until may 10, the mode is changed. And the system is switched on only when the temperature is around +25°C. 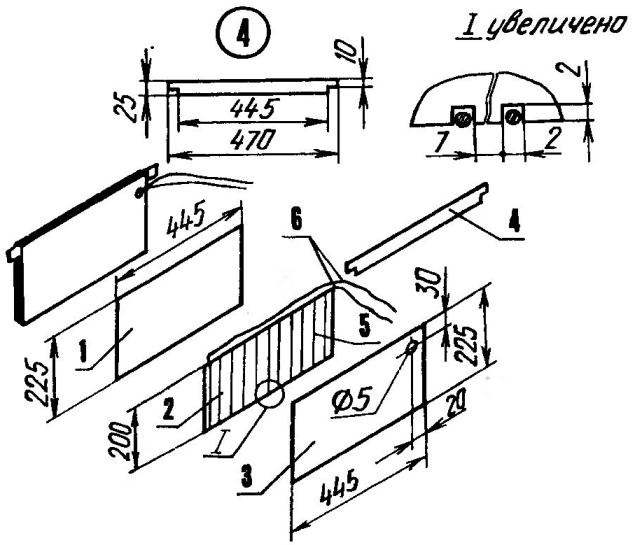 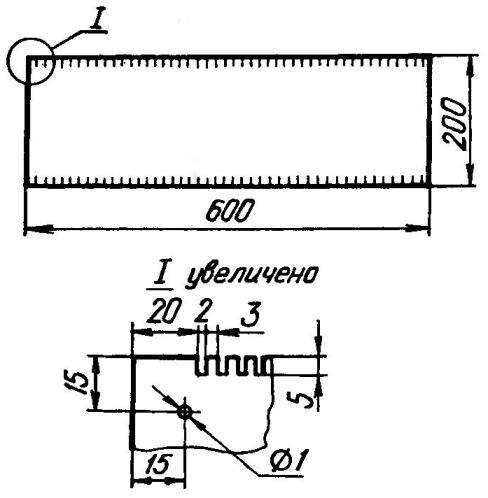 The layout of the MDF frame for the selection of optimal parameters of the heating coil.
Setup for testing the heating coil at the maximum allowable temperature range:
1 — base-insulator heat-resistant; 2 — the layout of the frame with the heating coil; 3 — thermometer; 4 — insulation resistant to heat.
Finally, another feature of the use of the WCFU. During the wintering of bees, the upper and lower cells hives opened on the whole width!
The energy of the system.
Bee family consumes the average power in the first half of winter 20-25 grams of honey a day. Since the end of February, when there is brood, the consumption almost doubled. When the energy properties of honey 3,15 kcal/g and average daily consumption of bee of his family of 25 g, we obtain: plan normally power consumption is 79 kcal.
The total capacity of the heaters for one family, as already noted, at 8.6 watts. During the day, they produce heat in the amount of 173 kcal. But the heaters in my apiary are open from mid-October to beginning of may, i.e. about 200 days. During this time, they, having spent a total of 42 kW.kWh of electricity, give (per one bee family) 34 600 kcal. And to bee for the same period was able to allocate an equal amount of heat they need to consume almost 11 kg of honey.
When comparing available prices for medical and energy gain for the beekeeper, as they say, is absolute!
A. CHEREVATENKO, Taganrog, Rostov region.