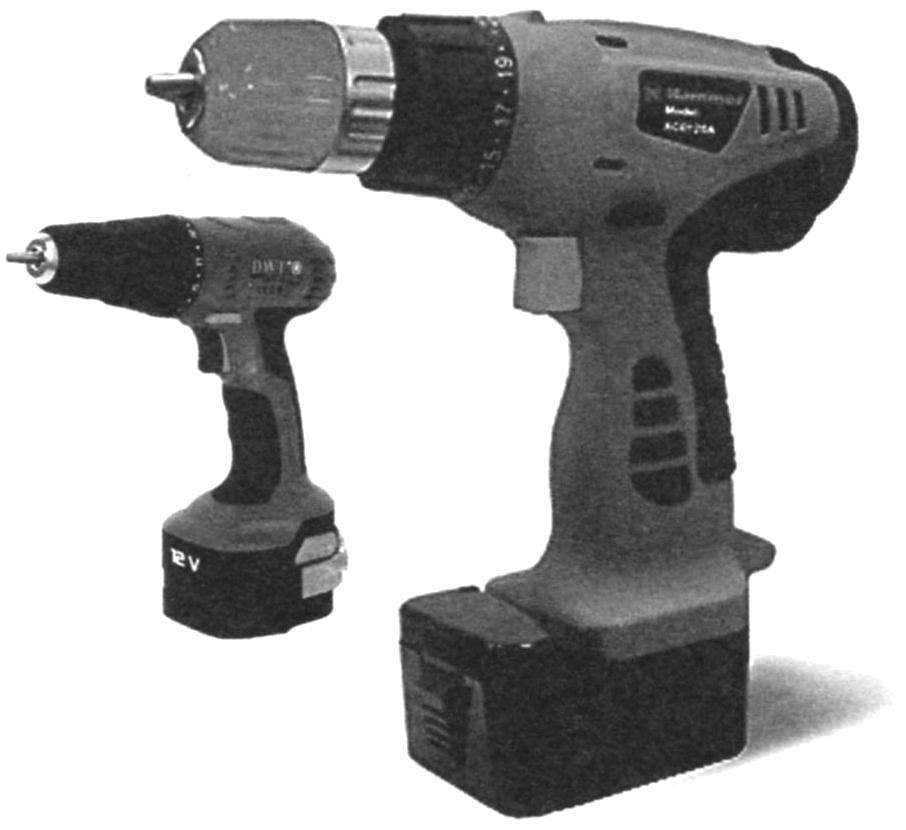 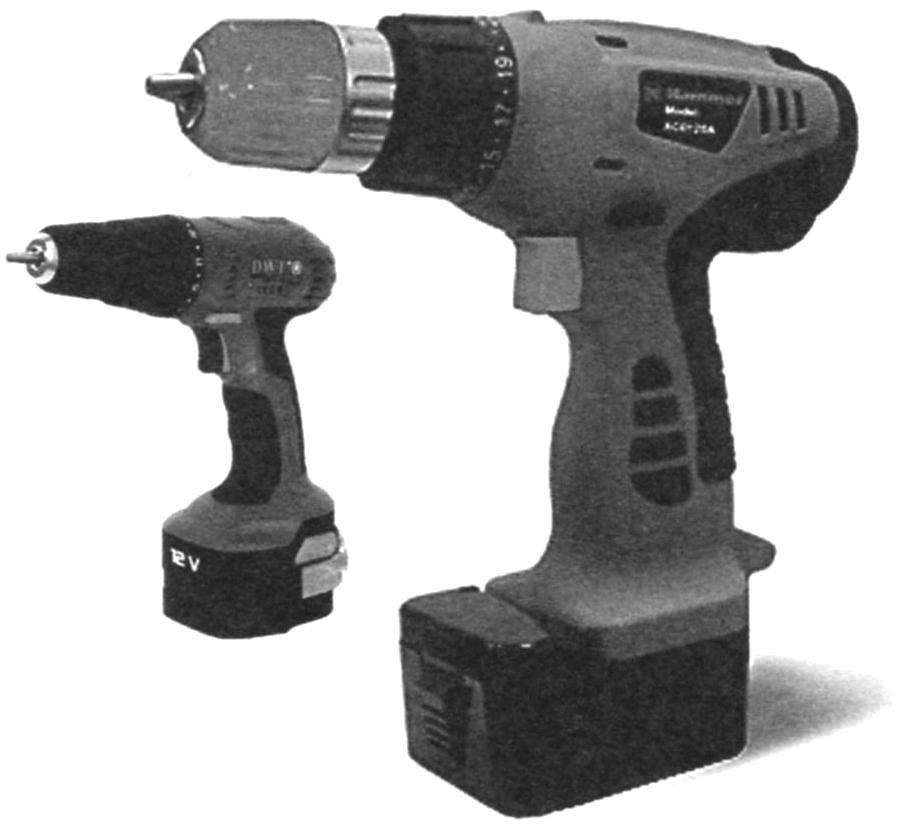 After a few years of correct operation your drill is the drill started to “MOPE” – ends quickly charge the battery (battery), has to be frequently charged, and for this to interrupt your work. Losing battery capacity is inevitable with heavy use (depends on the amount of discharges-charges) and over time. By the way, if the drill is rarely used, the battery capacity is also reduced by itself (especially if it is stored uncharged), and a year later, may be reduced by a quarter or more. But in many cases, this occurs prematurely because battery other dangers face. So, it will inevitably deteriorate if you apply the tool when the ambient temperature is below 0°C and above +50 °C and in rainy weather and damp conditions, especially if spilled into the water.
One of the main reasons for the gradual loss of capacity – sulfation, that is oxidation within the element. All this leads to an increase in its internal resistance and, consequently, unfit the latter for use in the screwdriver. Such a fault can be detected even visually after disassembly battery case screwdriver: corrosion or sulfitation will have gentally powder on the surface affected by moisture even after drying will not work normally.
Determine, lost if the battery capacity (the battery can be called a block, as it is considered non-separable), it is possible without “opening”, and without instruments: serviceable when charging is heated slightly to about 30 °C, and lost capacity is quite noticeable to the touch – up to 50…60 °C.
If the drill battery lost capacity, it is necessary to replace. Then the question of buying a new battery pack.
In our time the question of availability of spare parts (including rechargeable batteries) may seem superfluous. But not in all cases. 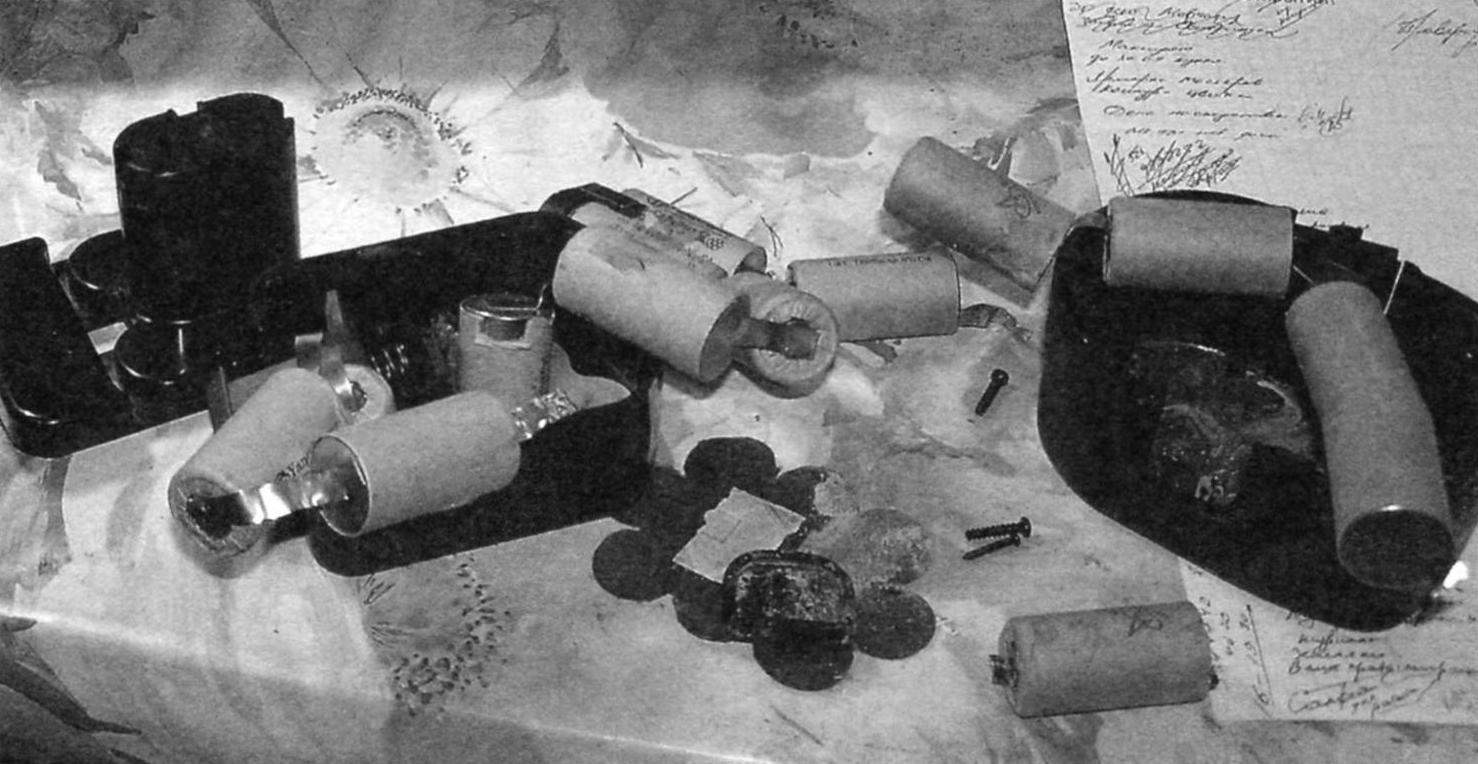 The elements of the disassembled battery case screwdriver Hammer ACD120A 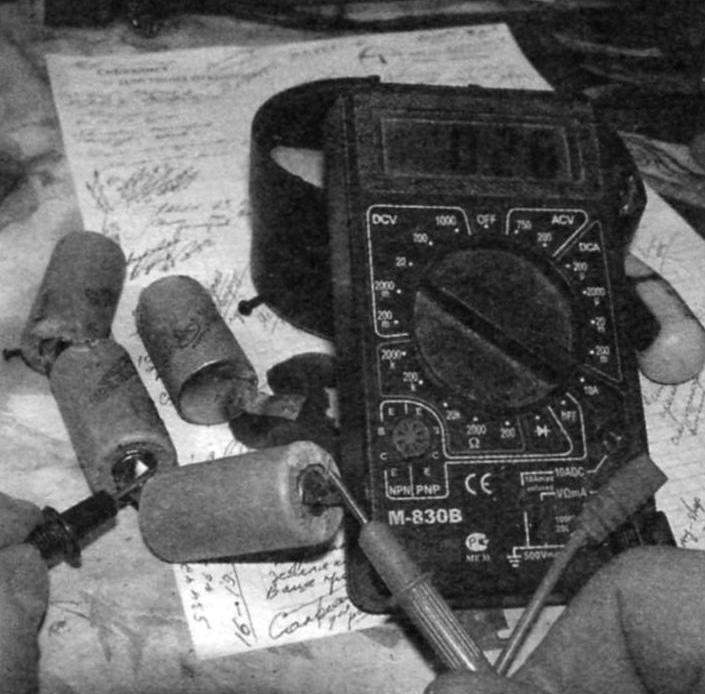 Definition of defective item tester
The problem is that to buy a separate battery pack for screwdrivers – a very difficult task, even in large cities, not to mention rural areas (with the exception of specialised workshops and service centres, where can I sell rebuilt battery pack “from old stocks”), and the battery packs are not standardized and each drill only “their” brand, as producers prefer to create their own shape and battery case, and besides, change them when designing the next modification. Besides individual buying a new battery is comparable to the cost of the instrument itself (price: one and a half – two thousand roubles), therefore, the following recommendations for self-recovery of battery drills I hope will be quite useful.
Before you start the repair with the opening of the battery pack you must charge battery as possible. Then disconnect the unit from the screwdriver and disassemble its body is of hard plastic, gently remove the cover with a screwdriver (if the clips of the lid when opening damaged, you then need to fix the battery cover instant glue).
Resuscitation regular battery is possible with the help of members of another, sometimes even older, and even from another screwdriver, because the internal structure of the battery most of such a tool are identical. So no matter what type and brand of drills available. The “donor” battery must be fully charged.
Battery consists of individual Ni-Cd (Nickel-cadmium) elements with a nominal voltage of 1.2 V each, and power consumption 1200 – 1500 mA/h.
For the compilation of practical recommendations, I removed the batteries of the equipment of German firms DWT ABS-12 and Hammer ACD120A, both with a nominal voltage of 12 V. cordless Drill DWT was retired me two years ago because of the apparent loss of intensity of the regular battery. Instead then purchased a new Hammer drill ACD120A, battery which is enough for exactly two years.
After disassembly of the battery revealed that the battery cells Chinese firms Yang Guang comparable in size and electrical indicators with Huanyu batteries.
If the total voltage of the battery 12 respectively, it has 10 series-connected battery cells with a nominal voltage of 1.2 V. In other cases, for example, 9.6 V or 14.4 V the number of such “built-in” elements-barrels will be different (8 or 12, respectively).
After charging the battery and the subsequent dismantling of his body determined the faulty elements with a tester (in this case, use popular digital tester М830).
Pre-charged functional element in the battery pack on their poles will show the voltage close to nominal, which is about 1.2 V. “scissorsa” elements, the potential difference close to 0 V.
By successively measuring the voltage on each battery element and the internal resistance (with appropriate devices) can be easily identified batteries unfit for further use (the greater the variation in the voltage at the elements, the worse the quality of the entire battery).
In case of emergency, battery I left for the continued operation of those elements, the voltage of which was 1 to 1.2 V. the Rest are culled. In place of faulty elements, or, better say, lost the energy -connected to preserve energy items from another CRA.
In the next phase, using side cutters (or pliers) I removed the metal jumpers between the elements, removing the elements of that lost capacity. Then in their place they installed an old, but usable item from another party (AKB).
To solder the jumper to the “new old” (model) element, you will need a soldering iron at least 40 watts soldering acid.
The ordinary solder type POS-61 and rosin are not enough: soldering is broken by bending of the jumper. And with the help of soldering acid can be well tinned with stinging contacts before soldering the jumpers and to achieve greater reliability.
After replacing all the lost capacity of elements is collected in reverse order in the case of battery screwdriver.
In completing the work set in place the lid of the battery case and carefully fixed it with glue “Super Moment” (you can use another suitable). 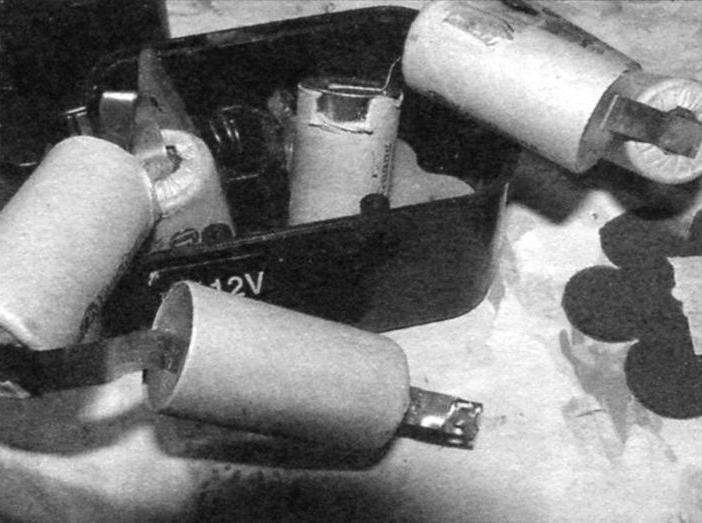 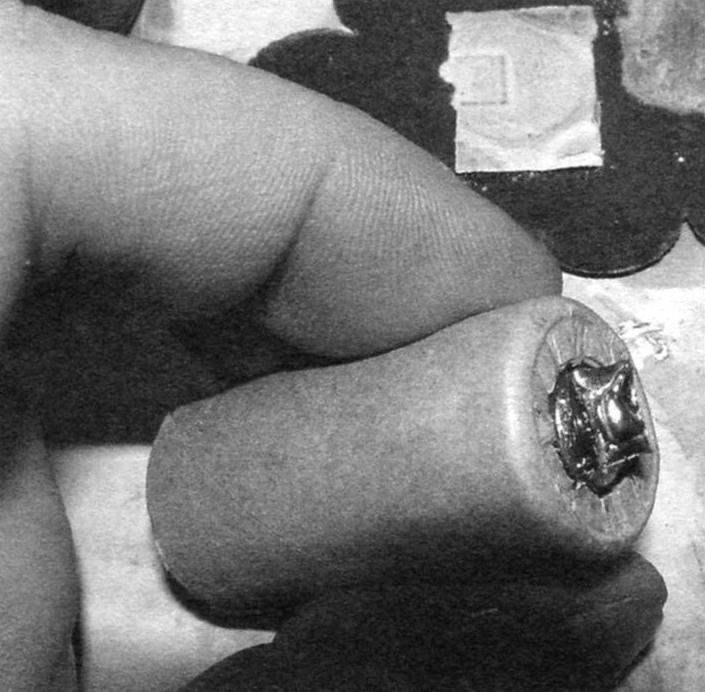 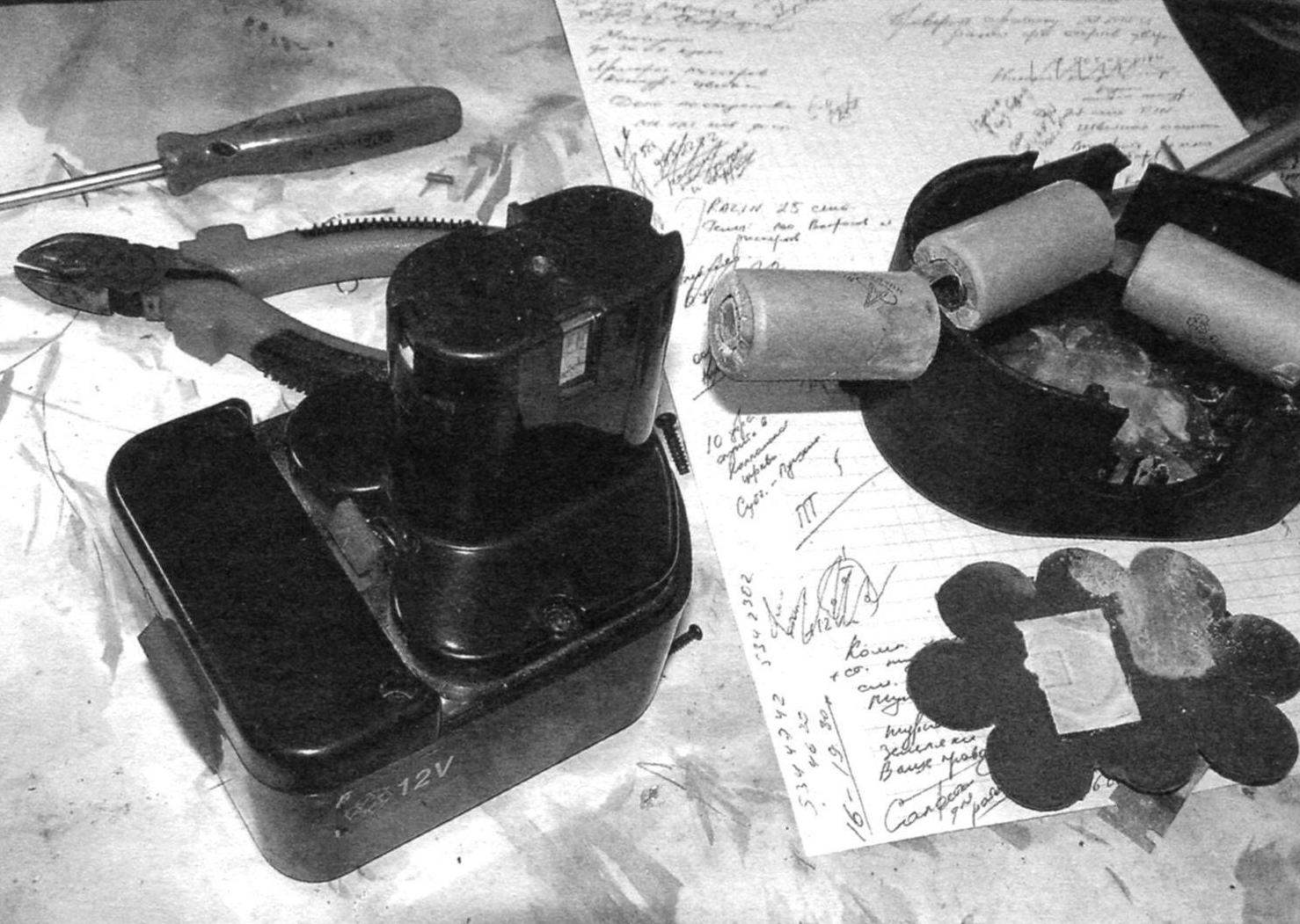 Collected and revived “old-new” battery for the screwdriver and Hammer ACD120A DWT and the remnants of battery the DWT ABS-12
After that the tool will serve for a long time. I have reinstalled battery provided enough intensive work of the screwdriver about a year and a half.
A similar method can restore battery for portable radios, for example, I also rebuilt the battery box for the radio Som V8, consisting of nine Ni-CD elements of AA and a rated voltage of 1.2 V is just replacing items lost capacity, new, newly acquired penlight batteries. Thanks to this battery BP-207N not had to throw out (almost new costs 1200 rubles).
In this case, such saving is justified given the fact that the intensive care unit (recovery) takes really little time: only 30 to 40 minutes.
In the old, battered battery faulty items can be several. During the examination of lying without use for two years the battery to DWТ worthless turned out to be a good half of the elements.
After the operation of replacing the remaining usable rechargeable battery cells a donor can be preserved for future resuscitation procedures.
A. KASHKAROV, St. Petersburg