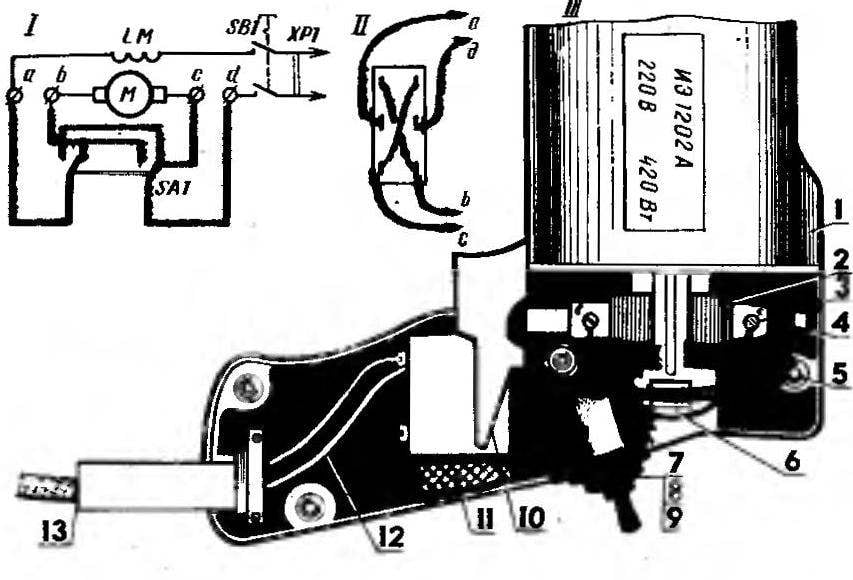 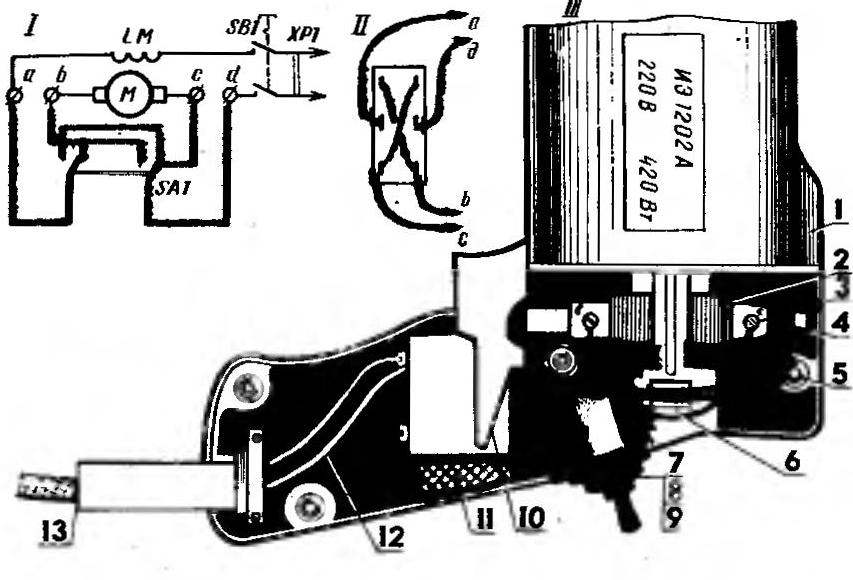 It would seem that can be the total electric drill hole puncher, washing rubber (eraser) and a paper clip? But O. Lavrov, who considers himself a graduate of our magazine, was able not only to see it shared, but make stationery to work successfully in a number of original technical solutions. As a result of normal (and battered) drill inquiring of homebrew has expanded its typical “drill-tocil-wide” function. Now she can, if necessary, and tighten screws to Unscrew, and if you really itch — even a jigsaw or hacksaw would work tolerably well. All you need is the right tooling (this material is not considered).

The first thing I did for my old electric drill, equip her with speed controller, which is adapted commercially produced by the domestic industry portable dimmer, SRPSKO-1 “Sveton”. As the latter was designed for a maximum 300 watt load, and consumed my “old” capacity of nearly one and a half times above mentioned, then at the first joint inclusion of “Sveton” went thick smoke. I had to hurry to replace the burnt resistors with new ones (see schematic diagram), with greater power dissipation. And instead of dynistor У436 put КН102Б. This upgraded regulator left dovolen. At least the failures were not observed!
The second improvement workaholic-drills was the reverse. To perform it was able, through rocker switch — toggle switch TP1-2 with 6 pins (3 on each group of switched contacts). Moreover, because the location for its installation in the handle of a drill were found without much difficulty (see Fig.).
A toggle switch across the arm, close to the bearing housing of the motor. And drills with built-in speed controller — along (where the handle is longer). In any case, to install the switch reverse is drilled in the handle butt hole with a diameter of 8-9 mm, which is then refined to the required size round file.
If it appears that implementation of modernization drills will interfere with the network filter, it is simply removed. And we shouldn’t fear this. Especially in the models hand tool line filter is missing (the will of developers and the manufacturer). At least “unfortunate” the filter can even be moved, to position below the switch trigger, lock-Rev limiter which will serve well and cut stationery eraser.
The same eraser comes to the rescue, along with the emphasis of a piece of a large paperclip, and when installed in a drill of “factory” ESC (skarum, development type BUE-1). However, preventing the protrusion of the brush holder will have to file down (so Yes, that will be visible bottom spring brush holder). However, it’s all About will be compensated at the expense of amenities and additional features when working with a drill, a modernized discussed above. 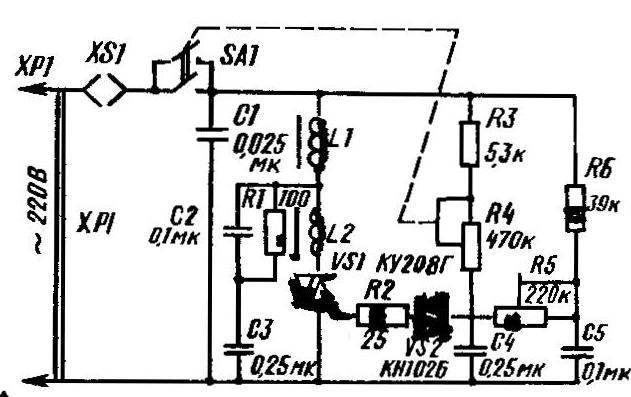 Modernization dimming, SRPSKO-1 “Sveton” to use it as a speed control drills (part replaced by more powerful, highlighted in red).

Electrical schematic (I) the installation conditions of (II) and accommodation in the body of the drill (III) reverse switch (arm cover removed):
1 — body electric 2 — manifold of the engine, 3 screws fastening the brush (2 PCs.), 4 — spring brush holder (2 pieces) 5 — mounting bushing with internal thread (4 holes) 6 — bearing, 7 — toggle switch .TP1-2, 8 —nut M12 9 —washer, 10 — switch-trigger, 11 — retainer-limiter (from eraser), 12 — wire current-carrying (in isolation, 2), 13 — input power supply cord.
Finally, the last of the proposed improvements of old (and not only) drill — equipping it with foot (pedal) speed controller, which along with the main feature and additional function: to serve as an original (and very comfortable) switch. Moreover, this design can be used in tandem with another load. For example, to work as a light controller with synchronous switching from one source to another. For example, in the darkroom, the transition from a red light on a photographic enlarger.
At the heart of everything here — an ordinary office hole punch (see illustration). Operating, he presses on the built-in a special way controller BUE-1, and actuates the push-button microswitch, thereby performing the corresponding changes in power mode, the load on one or two channels. Offer to repeat in a home mini-Studio device is quite compact. But its size can be further reduced (while increasing the reliability of the design), if the connection-wiring here “cycled” through the standard factory connectors, races!tolagaja latest inside of the pedal.
O. LAVROV, Moscow