At the beginning of our century among public and political figures in France only a few reactionary press were pursued with tenacity and anger, as Camille Palitana. Telling all sorts of stories about the untidiness of the Minister of the marine (this post Peleton held in the years 1902-1905), the Newspapers were silent, however, about the main thing. Supporter of the submarine fleet, Pelletan opposed the construction of dreadnoughts, and this threatened to cause enormous damage to the bigwigs of the French steel trust, eager to receive orders for linconnu armor.
Intrigue these dealers and that had led to the “Ministerial leapfrog”, which led to chaos in the construction of the French submarine fleet. The emergence of this chaos contributed to the confrontation between the two camps — supporters of the so-called pure diving and submarines.
It so happened that purely tests of the submarine “La Morse” and the diving boat “Narwhal” (15) was carried out almost simultaneously. And the success of these tests made the fight particularly fierce. The naval Ministry was behind diving, and public opinion for purely submarines. The newspaper “IDA” started a fundraiser to build electric submarines, the progenitor of whom was the boat “Imnot” (13), built in 1888.
However, the Minister of marine Lacroix, counting the diving boat is more promising, we decided to build a series of 8 boats of the type “Narwhal”. Pursuant to this decision in Cherbourg was laid four boats on the draft Lobata different from “Narwhal” only the increased displacement 157/213 t is 117/202 t and reduced buoyancy (26% instead of 42%). But Lacroix had failed to bring his idea to the end: in 1899 it on a post as Minister of the Navy changed Lanessan. And the next four submarines of a series “Farfale” (36), “Corrigan”, “Dwarf” and “Proper”, designed Mogh, was pure electric.
The money raised by subscription by the newspaper “Matin”, was built two all-electric submarines — “Frances” and “Algerien” designed by Ramazotti. In addition, Lanessan insisted on the construction of 20 small (70,5/73,6 t) submarines coastal actions such as “NAYADA”. These ships were small buoyancy as pure submarines, and a double engine, a benzene engine and the battery as diving boats. They were unsuccessful and have not received approval from the sailors.
New Maritime Minister Pelican rocked their activities by ordering two boats Lobea with diesel-electric installations. Built in 1903, “the Egret” and “CIGOGNE” within five years, which floated just under the battery due to the lack of reliable diesel engines, proved to be very successful ships. Lobe was so sure of the correctness of the chosen direction, in 1904, without waiting for the testing of these boats, developed the project to larger twin screw diving boats with a displacement of 351/491 T. Boat “Sears” were also diesel-electric. But when Pelican decided to build a whole submarine fleet of 34 large boats, Lobe decided not to opt for a diesel. 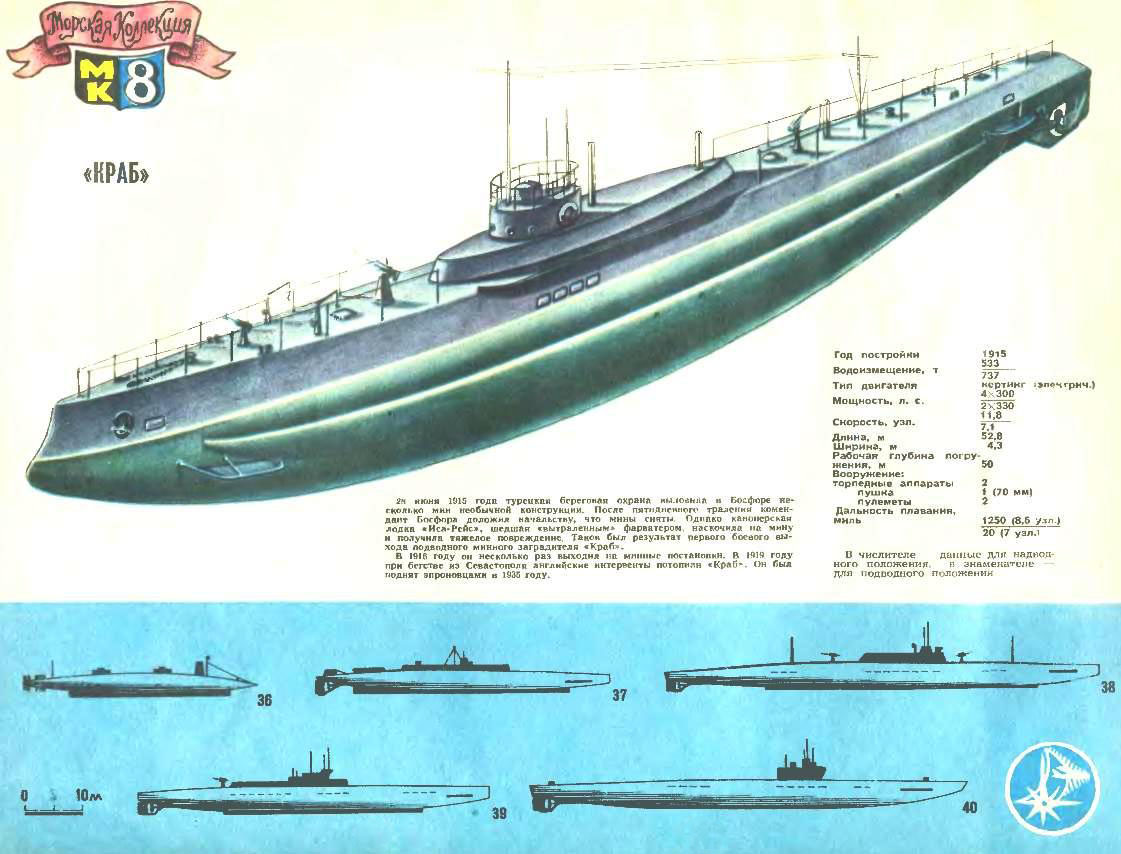 36. “Farfale” (France, 1901);
37. “Pluviôse” (France, 1907);
38. “Lagrange” (France, 1917);
39. “Gorgon” (France, 1915);
40. “Maurice Callot” (France, 1921).
The first 18 submarines of a new series of boats with a type of “Vendemiaire” (37) — was four metres longer than the “Sears” due to the fact that instead of the diesel engines were mounted on them more cumbersome steam turbine, which increased the tonnage of these ships to 398/550 T. Boats of the “Pluviôse” were down on the water during the years 1907-1910. Only after the French industry has mastered the production of reliable diesel engines, has started construction of 16 boats series — boat type “Brumaire”. They were down on the water during the years 1911-1913.
Although the boats of the “Pluviôse” and “Brummer” still was hard to believe these ships on the open sea, French sailors appreciate this great series as good luck. And in this great merit Palitana, who first realized the importance of creating the large joints of the same type of boats. By 1910, the French submarine fleet could claim first place in the world. The success of scuba diving in France could be even greater if Thomson, the successor Palitana, not interested in endless experiments.
Not very well-versed in the art, Thomson supported the idea of a fleet submarine capable of escorting capital ships and take part in large battles. These boats are not supposed to give the battleships in seaworthiness and speed, has had to develop not less than 20 knots. In 1906 a competition was announced, in which there were four pilot boats. The best of them — “Archimedes” — was shown at the test underwater speed of only 15.2 per node. Hopes for the creation of squadron boat has suffered greatly, but it became clear that displacement boats can be increased without deteriorating the maneuverability.
In 1909 it was announced a new contest, in which laid two destroyers paraelectricity boat designer simoneau; “Gustav Zed” and “Nereida” with a displacement of 849/1098 t; two paraelectricity boat designer Hutter — “Du-Puy-de-Scrap” and “San” with a displacement of 833/1298 t; four diesel-electric submarines of Hutter of the type “Lagrange” (38) with a displacement of 920/131В t; two diesel-electric submarines simoneau—”Gossel”, “Fulton” displacement 870/1247 T.
At the same time continued the development of the so-called boats of the coastal defense displacement which has also been steadily increasing. So, in 1913, came down to the water “Clorinda” and “Corneille” displacement 413/567 so For them in the years 1914-1917 followed In the boats of the “Amphitrite”, featuring only a large reserve of buoyancy — 414/609 T. the Displacement of the three boats following series: “Bellona”, “Hermione” and “Gorgon” (39) — was even more — so 523/788
After the outbreak of the first world war all the efforts of French industry was focused on production of arms and ammunition for the land army. The only submarines, built during the war, there were two mine-layers “Maurice Callot” (40) and “Paul Shawls” displacement respectively 931/1298 884/1191 t and t. But these ships entered service after the war and did not participate in the fighting.
G. SMIRNOV