We left Russia and its underwater aspirations in a difficult moment for the country, alas, is only the first in suffering the twentieth century. Broke out in 1904, the Russo-Japanese war found Russia in a far-from-ready position. Moreover, these words can be attributed to the submarine fleet. Not just existed, there was even no development plans, no more or less suitable for “reproduction” prototype. However, the Naval Ministry had to sign an agreement with the former firm of Holland “electric boat”, for the construction at Nevsky shipyard in St. Petersburg a series of five more units in the fall of 1903. However, the chosen system (the hull was built in Russia, the equipment arrived from the US), quite reasonable for such a new business in peacetime, during the war, became a real brake. In the end, even the head “Pike” delivered to Vladivostok a few months after the fighting ended. Late to the boat from another American lake, also assembled in Russia under the scheme of peace. A similar fate befell an earlier project hollandskyi “Beluga”. The only submarine that arrived in the far East to the Tsushima defeat, became overbought at the lake’s “Protector”, aka “Sturgeon”. But he did not have time to act before the end of the war.

Not ready for war were also domestic developments. Perhaps the most interesting of them and the most promising in specific settings near the blockade of Port Arthur was truly a mysterious mini-submarine “Peter Cat”. Her fate is shrouded in mystery. It was created by two true descendant of the legendary mechanics Kulibina: inventor Lieutenant E. V. Kolbasiev and naval engineer N. N. Kuteinikov. First in the beginning of the XX century, developed the project, and the second in 1901 built a 15-metre boat in the workshops of the port of Kronstadt. The secrecy was kept full, so that the finished “product” allegedly even did not enter the fleet! Meanwhile, Kuteinikov introduced an extremely useful industrial innovation, which is so no one then and not know. (In the years of the world war, the Germans “invented” it again.) We are talking about the way housing Assembly of separate finished sections. “Peter Cat” there were nine of them, and the biggest weight was barely over half a ton. Sections fastened together by bolts in just six hours. In the end, the boat turned out very transportable: after dismantling all the compartments were placed on the same railway platform or in the standard freight car. In fact, Russia was able to gain extremely promising subversive weapon. Such a submarine could even bring on a merchant ship closer to the enemy base, collect in a special compartment in the night and gently lowered into the water to attack. (After all, the weight of the boat does not exceed 20 tons, one fifth of which was accounted for by the batteries.) No wonder the project was interested in the well-known innovator, and the “marine commando” in the Russian-Turkish war Admiral S. O. Makarov; perhaps he even took part in the development – due to the truly draconian secrecy any documents left.
Looked the boat is simple and rational: the long flat sides of the cylinder with a very small cutting and horizontal rudders at both ends. A highlight of the project was the means of movement. Kolbasiev decided to use a small low-noise motors (only six pieces), each of which rotates its own shaft and screw. The idea is that this design promised excellent maneuverability without any vertical control surfaces; it was enough to change the speed of the corresponding motor. But in fact, the submarine was “super maneuverable” is any random speed change (inevitable when powered by the then batteries) have led to the fact that “Peter the Cat” was off course. Oh, and most importantly: the range of stroke in a total inability to load your batteries in the campaign, it is not hard to figure out was no good.
However, for the waters of Port Arthur, this collapsible (and cheap) “saboteur” with two 380-mm torpedoes could be very useful. You might expect that she was sent to the far East, fortunately, it was the only car. According to most sources, it did so. But then the mystery becomes too dense: in one of the memories of the port Arthur seafarers ‘ says nothing about the mysterious boat. Historians usually point out that it flooded before the surrender of the fortress. Curious if, according to the testimony of a prominent scientist and shipbuilder A. N. Krylov, he personally saw “Cat” in 1907 in the remote Sevastopol. And before that, in 1902 in the capital. Rather, instead of the Far East mini-submarine was sent to the Black sea, where she then sunk into obscurity aura of its secrecy. In any case, the development Kolbasiev was very interesting, but it is possible and promising.
And yet our far East received their current mini-submarine. However, of foreign origin. Her “parent” was the Spanish engineer Raymondo Lorenzo d Aquila-Mangostin, whose name is often pronounced in the French style as d Equilio. Not surprising when you consider that he began his career as a Spanish grandee (he bore the title of Marquis) in France. And continued in Germany, where in 1902 and created the baby “Forelle”, built a year later, already then famous firm of Krupp. We will tell you more about it in the history of the German “U-boats”; meanwhile, it is important that the baby (a displacement of even a little less than “Peter the Cat”) has attracted the attention not only of Kaiser Wilhelm and his naval Minister Tirpitz, but also attracted the representatives of Russia, is feverishly seeking worldwide suitable underwater vessels for its fleet.

The submarine “Carp”, Russia, 1907
1 – vertical rudder; 2 – screw; 3 – a plug (placeholder); 4 – rudder; 5 – exhaust pipe; 6 – electric motors; 7 – kerosene engines; 8 – ventilation shaft; 9 – manhole; 10 – boat; 11 – cabin; 12 – periscope; 13 – illuminator; 14 – wheel; 15 – a designated place; 16 – Kubrick; 17 – storage for spare torpedoes; 18 – cover; 19 -; 20 – batteries; 21, 22 – ballast tanks; 23 – reset the keels; 24 – Central post 25, the motor was based on “Germaniawerft” (firm “Krupp”) in Kiel. Design type – double-hulled. Displacement overwater – 205 tons, underwater – 240 t Dimensions: length – 39.6 m, width – 3.1 m, draught – 2.8 m. the immersion Depth up to 30 m. Engines: 2 kerosene engine capacity of 400 HP plus 2 electric motor producing 360 HP Speed surface/submarine 10,5/8,5 ties. Armament: one 450-mm bow torpedo tubes and two 450 mm torpedo tubes Drzewiecki (established after the entry into operation) (3 torpedoes). Crew: 29 persons In 1907 built 3 units: “Karp”, “Karas” and “Kambala”. “Flounder” was killed in the accident in 1909, the other two are flooded in Sevastopol in April 1919, at the end of the Civil war raised and scrapped
Here, patrons d Aquila, the owners of the company Krupp, made “knight’s move”, promising to give a beautiful toy if the Russian sailors will make an order for the more serious of the submarine. I must say that Germany had just begun to create their own regular submarine fleet, just in time to start construction of its first officially commissioned submarine (of course, Krupp), as broke the far East fire. Russia believed then the German Empire, if not quite an ally, as well as favorably situated to her power. Concerns remain “against the insidious samurai” without your underwater weapons demanded quick action. But it took more than three months of approvals and negotiations, and only at the end of may 1904, Krupp had signed a contract for the supply of three submarines of the same project that their own firstborn, “U-1”. Please presented “Forelle”, our side was in a hurry so much that even did not provide penalties for failure to comply with the terms of the contract! But testing of the finished boat was to be held at the beginning of 1905. Then they were supposed to be disassembled and transported by rail to Russia, where the submarine was waiting for a new and latest build that was supposed to spend a few months. It was believed that the “fish” (the boat called fish “Carp”, “Flounder” and “Carp”) could even keep up on the war.
But as you know, practice often differs from theory, and military shipbuilding that gives a huge number of examples. Was no exception and the German order. The boat was ready only by August 1905, long after the Tsushima disaster. Therefore, our Marine Ministry refused to deliver them by rail and offered to drive to Libau by sea, having at the same time, so to speak, the final test in the working environment. However, to experience until there was nothing. Russian officials carefully watched the construction of the German prototype, which was not an example of faster, noticed useful innovations and began to insist on their implementation in the “export version”. Interestingly, this did not stop then to blame Krupp in that he used a “customized” Russian boats as prototypes and the results of tests made changes in the national project, although the situation was just the opposite.
The Germans, however, rested not in a hurry to make a pretty costly improvements to existing ships, citing a signed contract. So, the “carp” left the bow (he only) torpedo tube, the outer end is tilted down. This feature is characteristic of surface destroyers (torpedo smoothly entered the water, not flopping on its surface), was totally unnecessary for shooting under water, and the Germans for their submarines have been abandoned. But the design of the Russian boat did not make the corresponding change.
The parties ‘ struggle proceeded with variable success for nearly two years. In the end, our Committee under the leadership of captain 1st rank M. I. Beklemishev was able to insist on the fact that a considerable number (about 60) claims to be resolved in Russia, but by German companies. Compromise was not a complete victory, but to delay the process of building a boat then it does not make any sense: on the stocks as Germany and other powers already laid much more advanced units. In the end, the last building the tests took place only in the summer of 1907, and in early autumn, all three submarines proceeded to the Baltic to Libau, entering into the Training squad of scuba diving. The head of the Commission has received invaluable experience which enabled him later to become a designer of submarines.
But “Forelle” had already long been in the Russian fleet; moreover, her age was coming to an end. But it is ripe just “for lunch.” In June 1904 “mobile protective pontoon”, as for reasons of secrecy referred to German gift arrived by railway from Kiel to Libau. As the boat Kolbasiev, equilibra “German” could be transported on a single platform. In the comfortable carriage of the same train went experts “Krupp”, whose task was to teach “these Russian” submarine case. 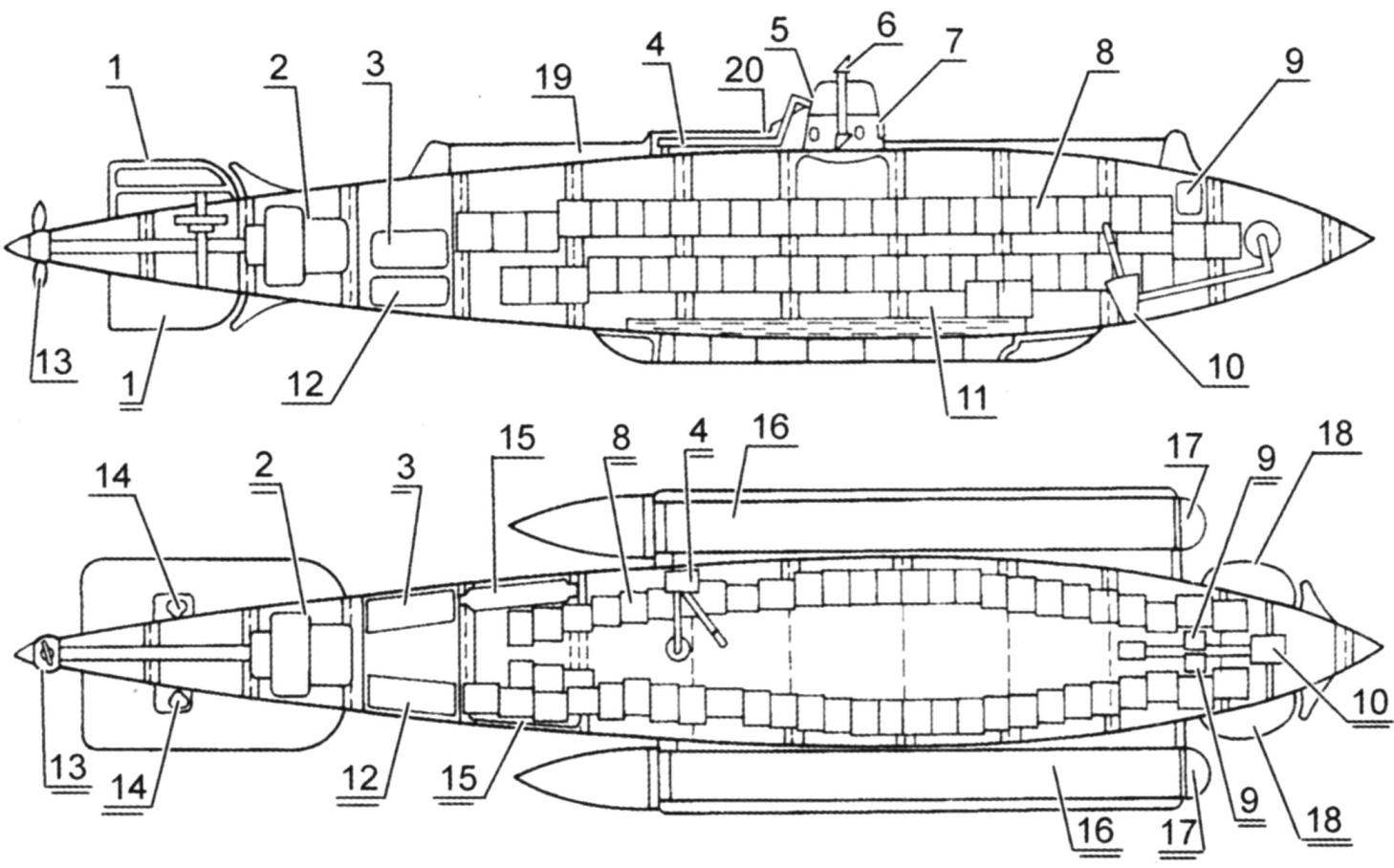