Many historians of the Russian fleet passed the XIV century and goes straight from the campaigns of the Kievan princes to Byzantium if not Peter the Great, at least to the campaign of Ivan the terrible in 1552, Kazan. In fact, the shipbuilding and the movement of Russian troops on the ships never stopped, even during the Tartar yoke.
At the end of the XIII century in Russia was created a new type of ship — the eyelet. This name, according to some linguists, comes from drevnekeltskogo words “boat”, but more likely — on behalf of the polar bear — eyelet. By the way, is the name of the bear existed in Pomerania until the nineteenth century. An indirect argument in favor of the second version is that the Normans went on the seas in “sea wolves”.
Often the eyelet is decorated with the heads of bears. So, in the Novgorod epic in the description of the ship Nightingale Budimirovic said: “In fact it was the Falcon-ship two bears white overseas.”
For the first time about the eyelet mentioned in the chronicle of Eric in the episode relating to the year 1300, when the Swedish fleet under the command of Marshal Knutsson went into the river and burned several Novgorod eyelet.
In 1453 Moscow Prince Ivan traveled on such ships along the Volga river from the Elm mountains to Nizhny Novgorod. The last mention of the eyelet is contained in the Pskov Chronicles 1473. By the way, in Chronicles, they were considered larger vessels than the rook.
Typically the eyelet was built of pine. The keel was cut from a single tree trunk and was represented by a beam, which is superimposed on top of the wide Board that served as the basis for zones of the cladding. It was held together with the Kiel wooden rods (nails), the ends of which were rasklinivanie. Beams, forming the bow and stern of the ship, was made straight and installed vertically or with a slight outward tilt, the nose was above the stern. They were connected to the keel of the brackets (angle brackets for rigid connection of the elements of the vessel adjacent to each other at an angle) carved from a tree trunk with radiating angle thick branch. With the outer skin and the first frames stevne are held together with horizontal brackets, with the top at the same time serves as a support for the deck flooring, and the bottom was placed at the waterline or slightly above. Prugi (frames) consisted of “pieces” (component parts) thick branches of the natural deflection, the abrasion at the contact surfaces to the skin, with a slightly beveled edge on the opposite side. In the middle part of the vessel aprove consisted of three parts, and the extremities — of the two.
Sea eyelet (unlike the river) had a flat deck just for the bow and stern. The middle part of the ship (about a third of the length) remained open. Their capacity was 4 — 4,5 t On the inner lining rested six or eight benches for rowers. Thanks to shallow draft (about 0.5 m) and big ratio of length and width (5:1), the ship possessed relatively high swim speed. Both marine and river eyelet carried only removable mast, located in the Central part of the body, with one oblique or direct sail. Hinged rudders on the eyelet set, they replaced the feed steering oars.
River eyelet generally differed by its design from the sea, and not only in the presence of the deck. So, according to some historians, the eyelet of the river was a boat with a capacity of up to 30 people. The keel was broad and flat. The same curved bow and stern beams were connected to the keel with wooden pegs, or in a secret tongue. The corps was recruited from hewn planks. The first belt cover is attached to the keel the same nails, the rest was sewn between the willow rods mount steinam pins. Upper belt cover was thicker than the others by about half. Bent aprove mounted in a housing and nailed to the outer skin only with wooden pegs. The inner lining was not continuous: at the bottom of Elan were free Board, just above the cheekbones were the inner belt (thickness as outer skin), which relied benches for rowers, and the upper zone was at the level of the last external and attached to progam nails. The thickness of the inner and upper zones was equal with the corresponding outer. Plancher (wooden beams with sockets for rowlocks running along the side of the boat and covering the upper ends of the frames) was absent. In the gap between the casings inserted wedges-cochiti, which served as supports for the oars. Thickened last belt of outer and inner casings provide for a sufficient strength of the Board with possible Board or by dragging the eyelet through Perevoloka. 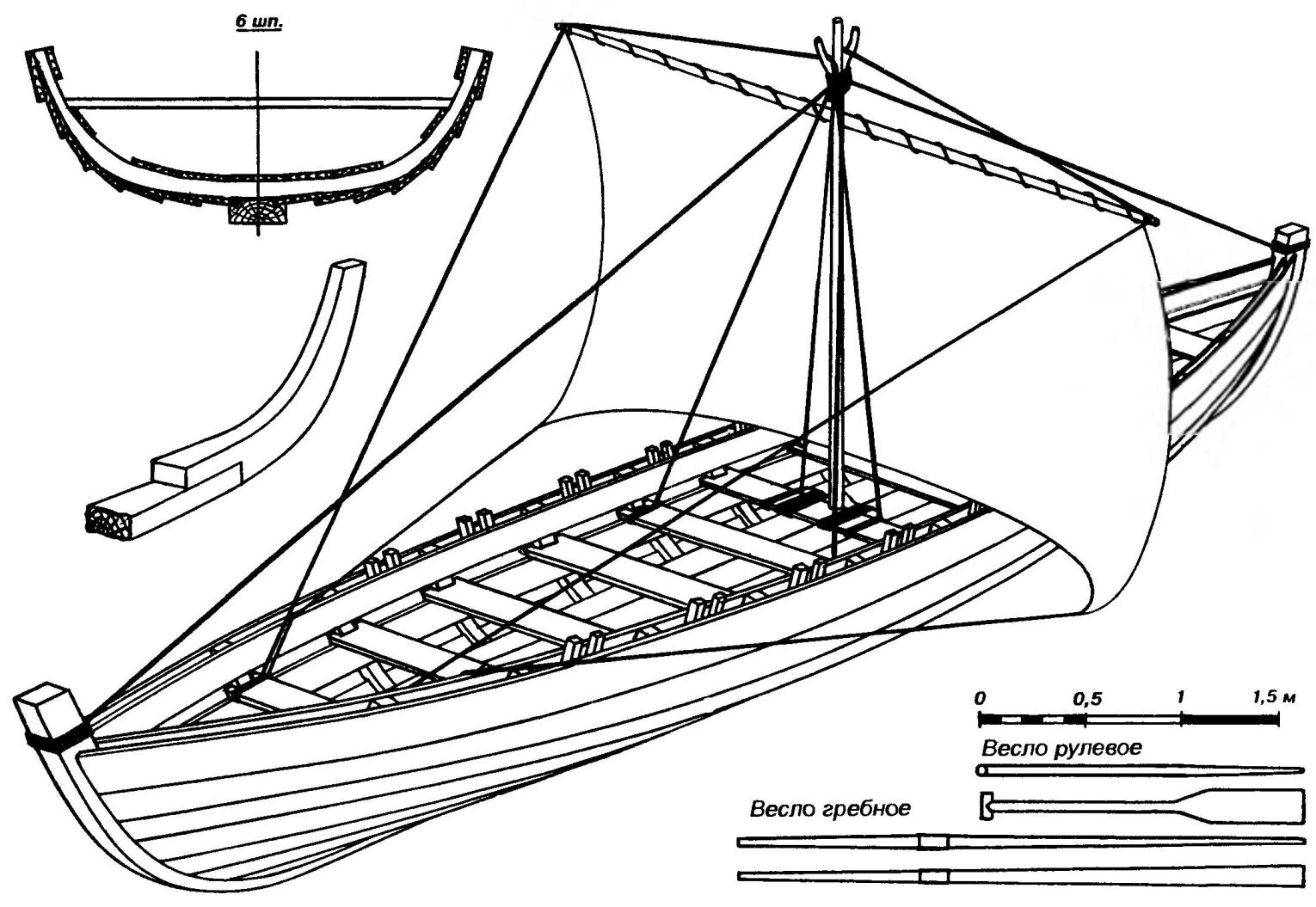 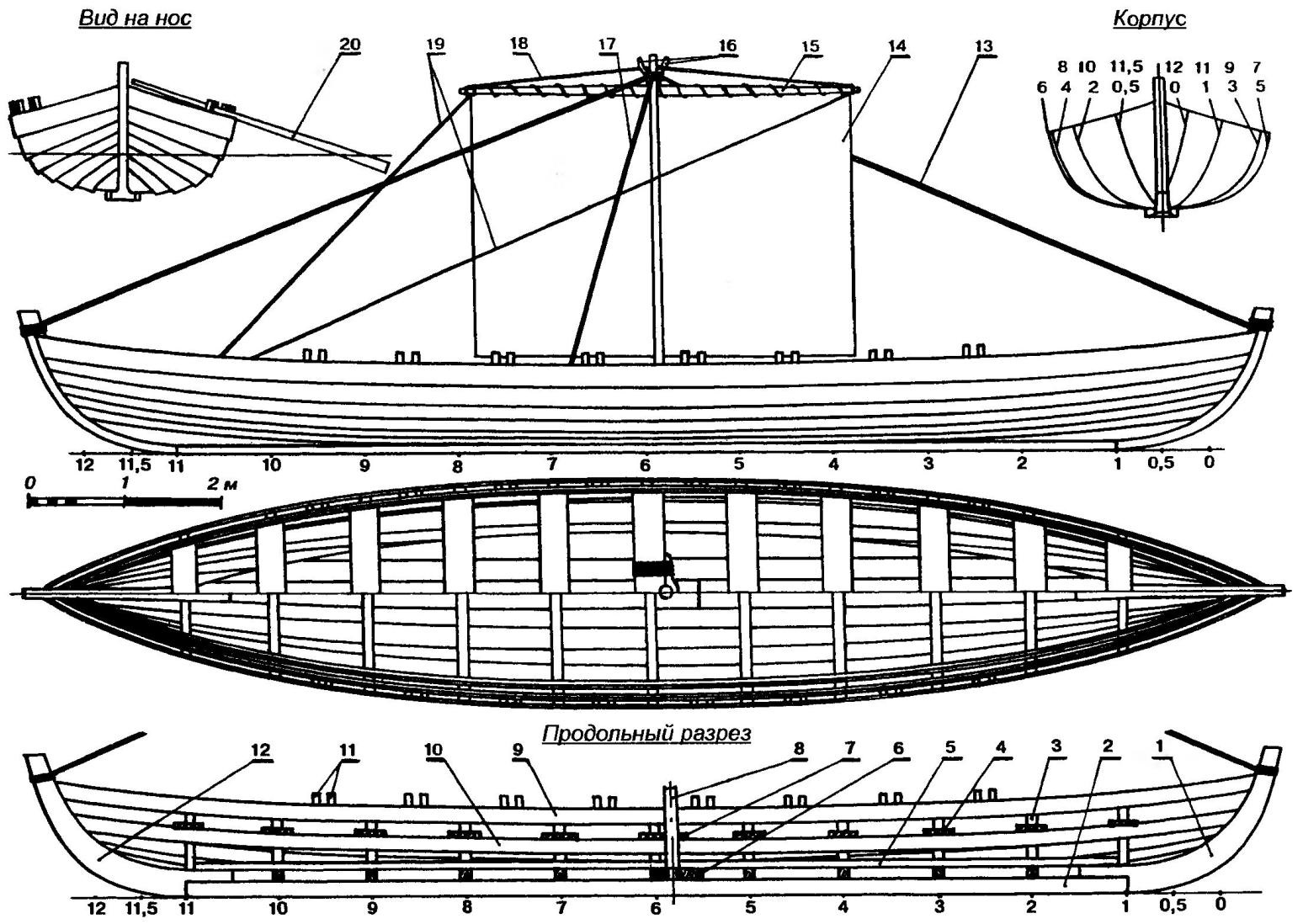