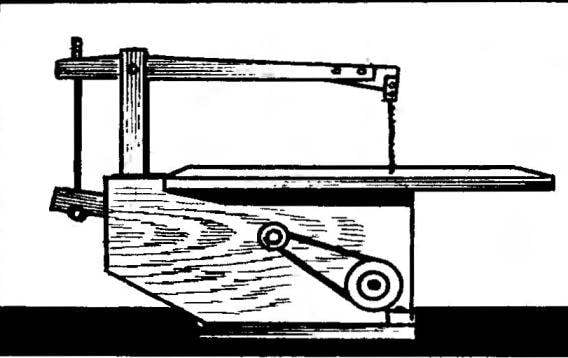 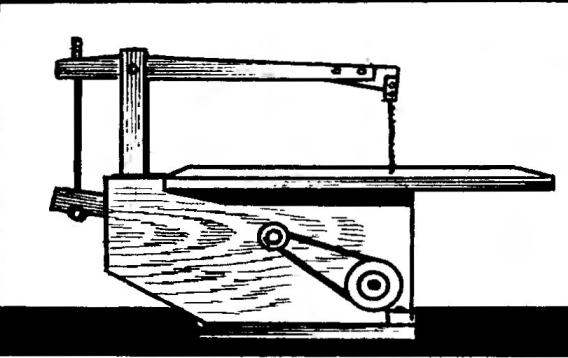 Though the proverb States that the red hut not angles, but the frame would remain just a frame, if the house is not decorated wooden lace Welt (sawn) patterns in the boards window casings, shutters, eaves. To revive this Russian national tradition is now trying not only woodworking workshops, cooperatives or factories, but also individual developers — if they erect a country house, cottage or garden house. A good helper in this laborious work can be a simple machine is a mechanical jigsaw. As actuator to match even the motor from a sewing machine.

The machine consists of two main components: the frame with the motor and rocking with a nail file.
The frame is made of 12 mm plywood and includes a base, a work table, and a box, inside which is mounted a shelf bracket with motor and intermediate shaft, double-strand pulleys which are located outside and are connected by a rocker belt. From the opposite side are eccentric and rocking.
The eccentric intermediate shaft connected with the rocking rod is made of steel plate with a thickness of 1-2 mm and provided with bushings — bearings made of bronze or PTFE. Connecting elements are stepped screws M4.
The intermediate shaft is mounted in two bearings are closed with metal caps on the screws. Double-strand pulley (it’s metal, but can be carved and made of wood) are tightly placed on the shaft and fixed by M4 screw with washer. In the same way installed and the Cam. Its flange is made of four krasnozelenyh from the axis of the threaded hole to adjust the speed of the screw is so regulated by the amplitude of rocking, which consists of two wooden rockers pivotally mounted in a wooden rack. The rocker arms on the rear ends have grooves and holes for tension screws with wing nut, on the front — pluggable metal plates hinged earrings for attaching files. (Before mounting the blade is passed into the working gap in the metal plate of the table.) 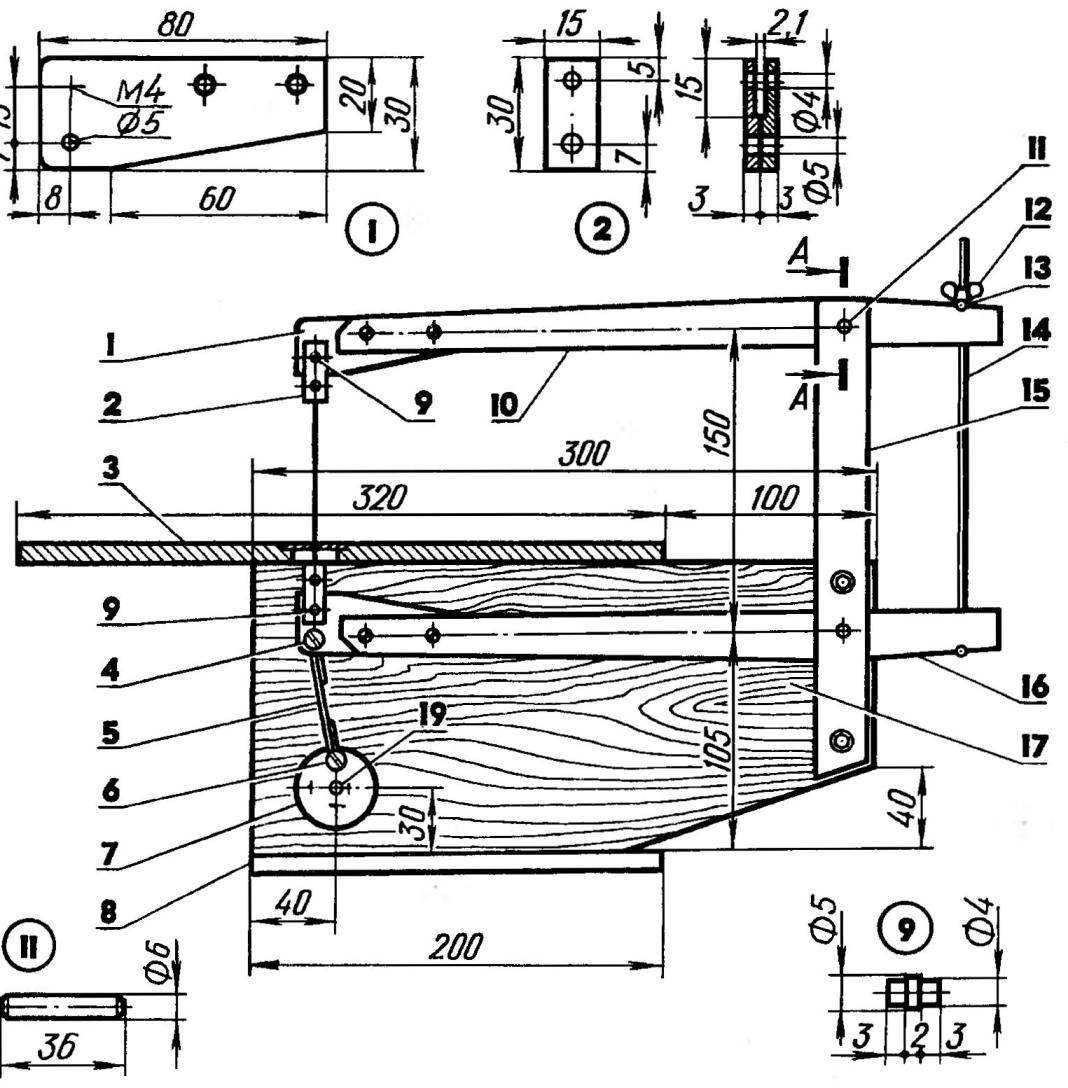 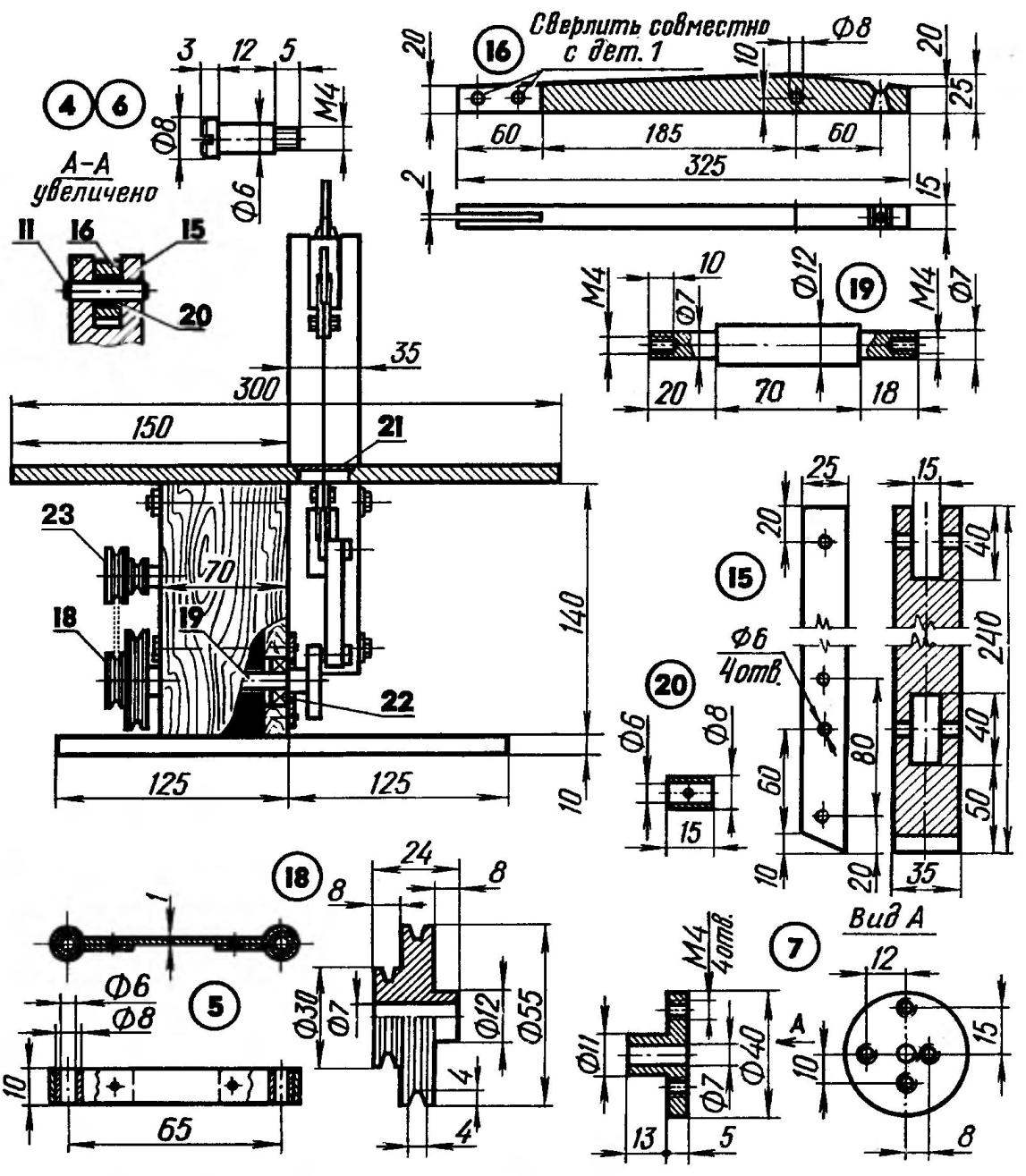 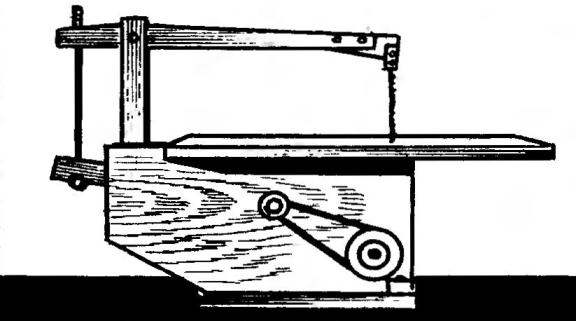 The view from the side of the pulleys. 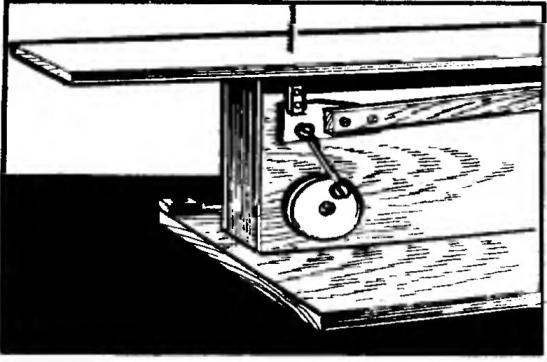 The view from the Cam. 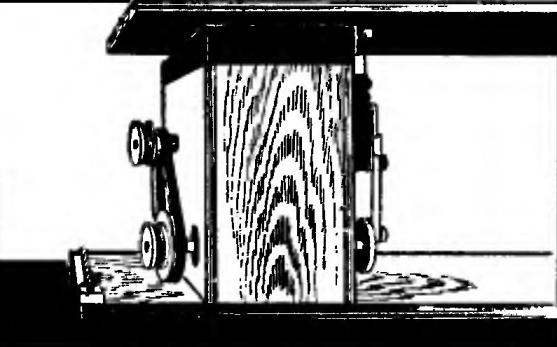 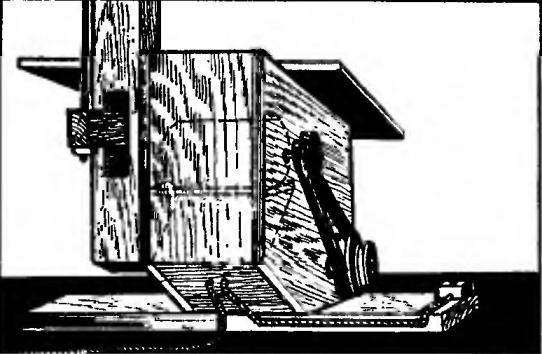 Box with rocking stand — rear view.
Special attention should be paid to the attachment point of the saw. Due to the fact that the rocker arms make frequent vibrational motion, insert plates experience significant load. Therefore, they are rigidly fixed in the slots of the yokes, tighten the mounting bolts with nuts and washers. Conversely, earring mounting a saw blade mounted on the plates so that the screws are not too tightened their halves, leaving the necessary degree of freedom for the axis of a hinge insert plate.
On the rockers, in addition, special attention deserves the hole for tightening the screw: from the outside it has a transverse depression in the ground under the thrust of the thumb screw, and the inner side of the extended groove that the screw was stock at angular oscillation of the rocker arm.
Rocking stand is made out of a single block. On top of it cut a groove under the top rocker, and the closer to the bottom end, with a rectangular hole under the bottom yoke. However, the stand may be a composite of two halves, then the grooves in them are easier.
Such a machine jig-saw comfortable and versatile. It can be used for straight cuts of workpieces and for figure carving wood patterns, suitable to beautify any building both outside and inside, and the interior and the furniture, especially homemade.
According to the magazine, kedermister” (Hungary)