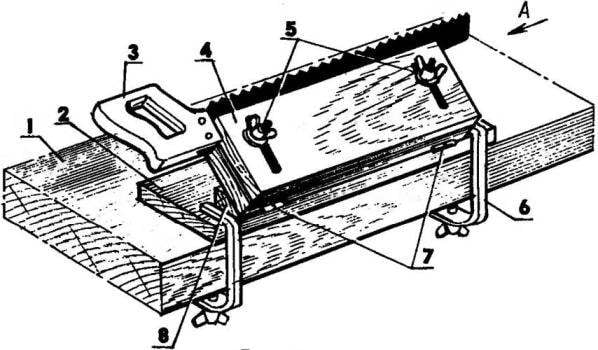 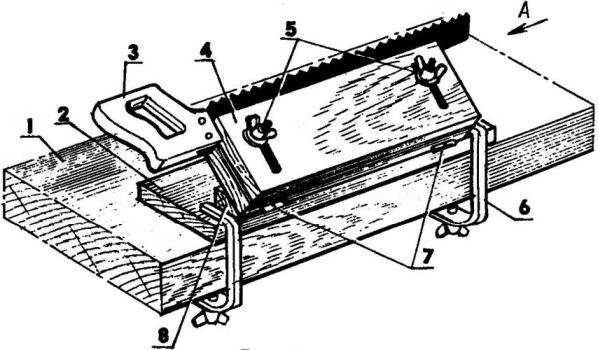 For the workman man a good tool — it is, as they say, is half the battle. For cutting tools (e.g., saws) it is important that it was sharp. With a significant amount of grinding you have to do periodically, and if the material is solid and hard, it is time for this, in General, support the operation, spent even more than the work itself. But, making edits “on the knee”, and get tired quickly and the quality suffers.

In order to facilitate the process of sharpening the saws and to ensure the quality of this operation, I had to come up with a device that is easy to make yourself.

The main part of the clip. It consists of a support and clamping straps. Both parts of equal size: 25 mm. 400х150х I have made from beech wood, but you can use other hardwood species (e.g. oak) or laminated plywood.

In both parts near the end faces and, parallel slotted grooves of the same size 50×9 mm (for screws M8).

Support bar with canopies (card hinge) is pivotally connected to the base. It was made from the same Board, and strap, only the length of its base increased by 100 mm Over the 50 mm projections on each side of the base I attract the two fixture clamps to the top of the work bench (or table). 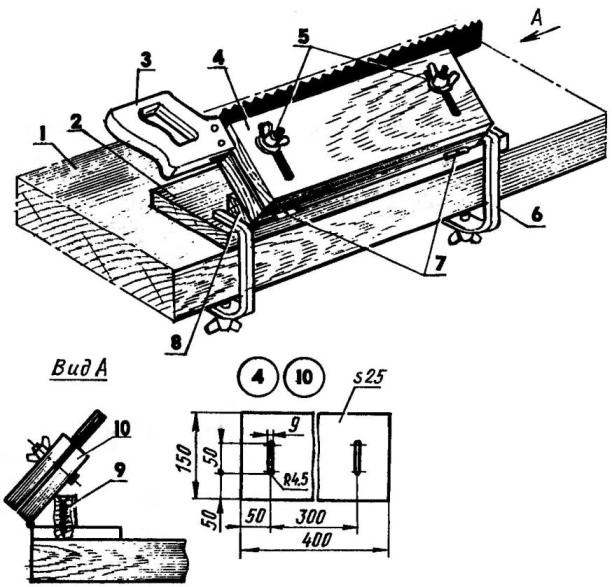 A device for sharpening saw (in working position):

For fixing the clamp in an inclined (useful for sharpening saws) position, between the base and the clip inserted the bar, which is attached to the base with nails (and screws). The near-vertical face of the bar for this Astragal appropriate angle.

For sharpening the saw lay between the support and clamping straps teeth up and clamp M8 bolts with wing nuts (the bolts at the same time limit the penetration of the cutter). The canvas is put up so that the saw teeth protrude above the clamp at 15 — 20 mm.