As an Amateur I sometimes need a tool that is rarely or on sale, or is not satisfied by construction, (and today — and for the price). So we have to invent and produce itself, looking for possible easy solutions. I would like to share with readers his versions of such popular devices as the machine (frame) for sawing metal.

Start with the requirements to such instruments. Chief among them: during operation, the machine must keep the saw blade well tensioned, to provide comfort when cutting at different angles, and if necessary — and easy replacement of the canvas the new.
The simplest machine-impromptu (option to give) I made in a few minutes. Took him fresh cut branch of a willow (willow) of adequate thickness (not less than 25 mm), bent into the form of an onion (Fig.1) and instead of string tied soft steel wire mounting holes for the saw blade. Fabric fastening with nails, screws or bolts is unacceptable as will lead to splitting of the wood. However, this method only in extreme emergency: still the tree dries out, losing the elastic properties.
Such machine-frame is easy to make and of steel rod round, square, hexagonal or “valve” section. The diameter (thickness) of the rod should be selected in the range 8… 10 mm. depending on material to bend the rod to impart a desired shape (Fig.2) in the powerful grip of using a large hammer. But can glow red hot and bend in hot condition.. At the ends of the rod with a file to carve the landing pads for the saw blade, then at a distance of 10 mm from the ends to drill holes and cut threads for fastening screw M4. If you need to set the canvas at a 90° angle to the plane of the machine, should also be tapped in the ends of the rod (Fig. 3). Fabric fastening screws with washers. To provide the necessary tension, the distance between the centers of the holes after bending machine should be about 302 mm (for panels with hole spacing of 300 mm). 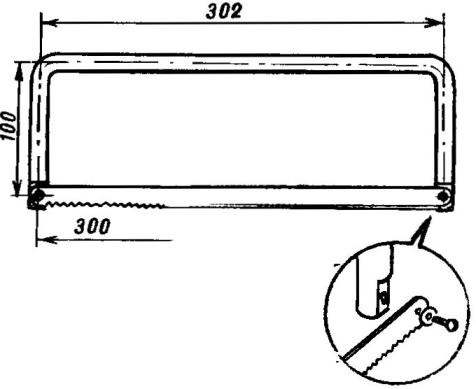 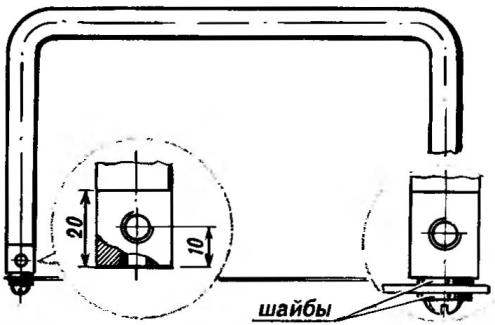 Fig.Z. The machine has two positions of the blade (shown in its horizontal position). 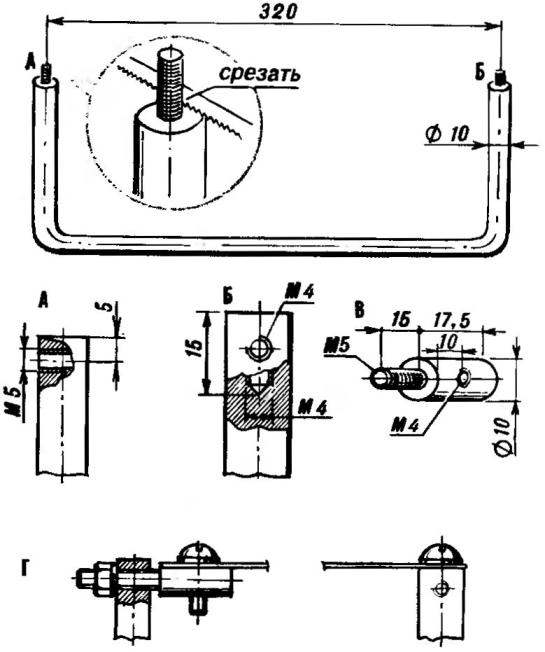 Fig.4. Machine from staples (stick) radio.
A — left leg, B — right, B — subsidiary detail to the left leg; G — saw in a horizontal position. 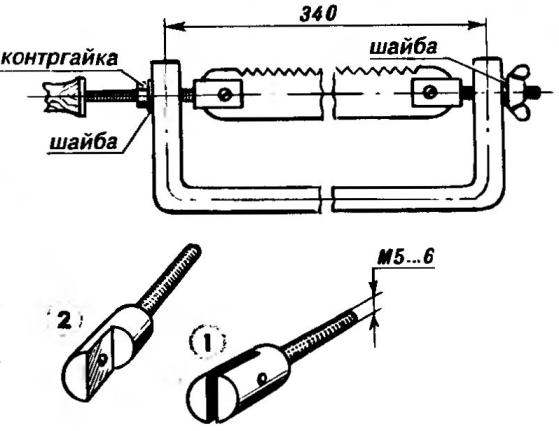 Fig.5. Hacksaw high functionality:
1 — mount a single leaf, 2 — mount package of several canvases.
Once I got a few clips from a scrapped radio — and adapted them as the machine frame (Fig.4). To do this, one of the staples removed the threaded shanks and drilled hole on one leg (A) under the thread M5 on the other (B) — two mutually perpendicular holes for thread M4. From the second brackets cut off part of the legs together with a threaded shank (In); it also drilled the hole for the M4 thread. Trying to detail In to the hole of the legs And the bench, asked the tension. In addition, by rotating it, respectively, side or end holes on the leg B, received in a vertical or horizontal position of the saw blade in the machine.
In another case, in the manufacture of a constructive analogue of the standard hacksaw (Fig.5), the distance between the legs of the machine chose the 330…340 mm, that is, with the stock adjustment screws and different lengths of fabric. The leg drilled a hole and cut a screw under the handle in the opposite hole without thread. The screw under the handle (2) is screwed and fixed with the locknut; the tensioning screw (1) missed in the hole and supplied the usual nut-“lamb”. This design not only provides adjustment of the web tension, but also install it at any angle. In addition, it is possible to mount multiple canvases to produce cuts of greater width.
V. BESEDIN,
Tyumen