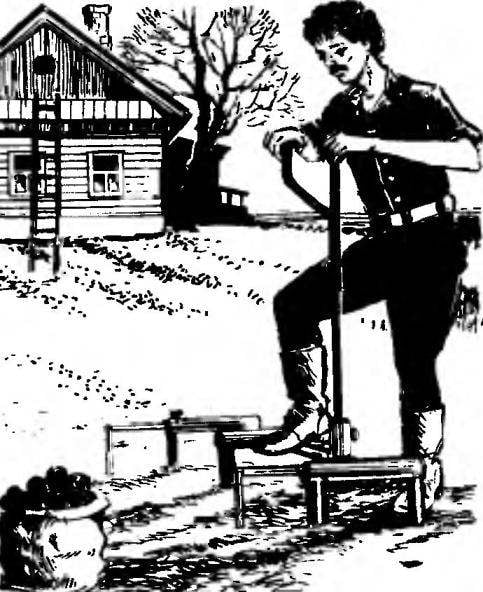 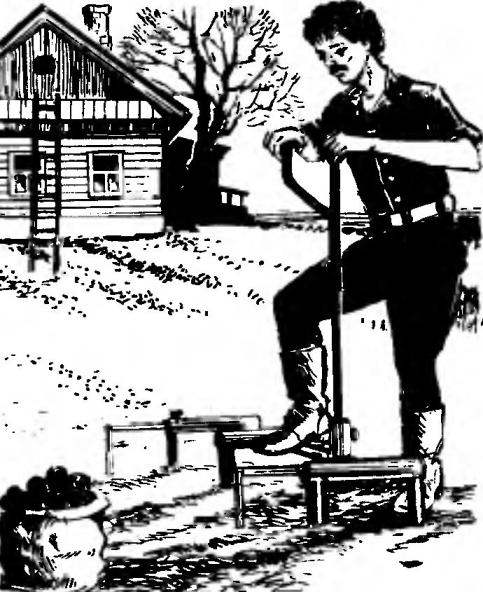 “Potatoes are often called the second bread. Only easy this bread gets. Especially without the use of nepamirstama tillers and small tractors, with the only hope for a spade, Yes a spade. About a year ago, “modelist-Konstruktor” sort of decided to help by posting a good development of the tracer-the potato made from water-gas supply pipes. But then seems to have forgotten the promise to return to the topic of mechanization in the cultivation of labour-intensive crop, which is a pity. V. Ivankov”.

One swallow, as they say, does not make a spring. We can hardly expect any noticeable changes and the use of a single development, even if that is highly appreciated by gardeners tracer-potato (“modelist-Konstruktor” No. 5 of 1996). Need a set of modern, specialized tools and manual equipment to facilitate planting, cultivation and harvesting such a labour-intensive crop, like potatoes.
For example, I use a set of homemade tools. But it may wish to recommend only what has undergone the strict inspection field and time.
Plowed on, not nailed rain garden to work well with tracer-planter with twice the number of amcooperative (Fig.1). If the soil is additionally loosened with a rake, the pointed elements of the tracer are included in it, even without much pressure with his foot on the hard ground. Productivity increases by almost one hundred percent! However, provided that the fixture is made of thin-walled steel pipes to make it easier.
In Fig.2 shows well-proven in practice innovation — Probolic-Hiller. They work from two operators. One leaned on the arm that the shield was on the field with the required depth and the other is concerned with the promotion of the whole structure in a given direction. Based homemade, like tracer-planters, a — frame of welded water-gas supply pipes.
Earlier in propolice-Hiller I used two shield: one for aisles with a width of 0.45 m, and the other 0.5 m. Then moved on to replacing the plow with end caps, which are tightly attached to the main shield and fasten with two screws. When necessary, the trailer is easy to remove.
The plow is made of 2 mm sheet steel (better steel — it sticks less land clumps). 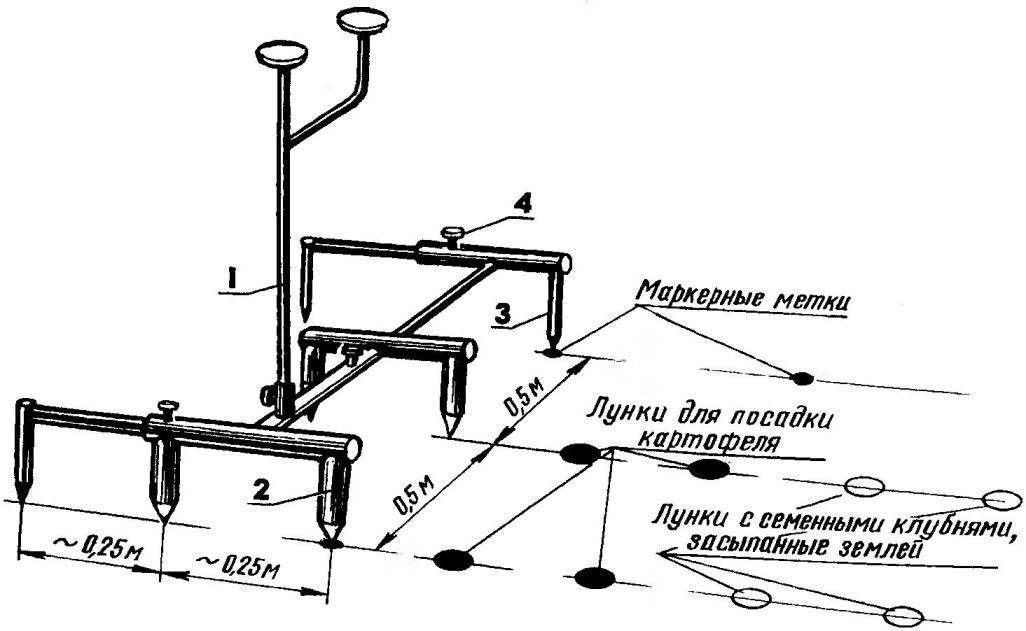 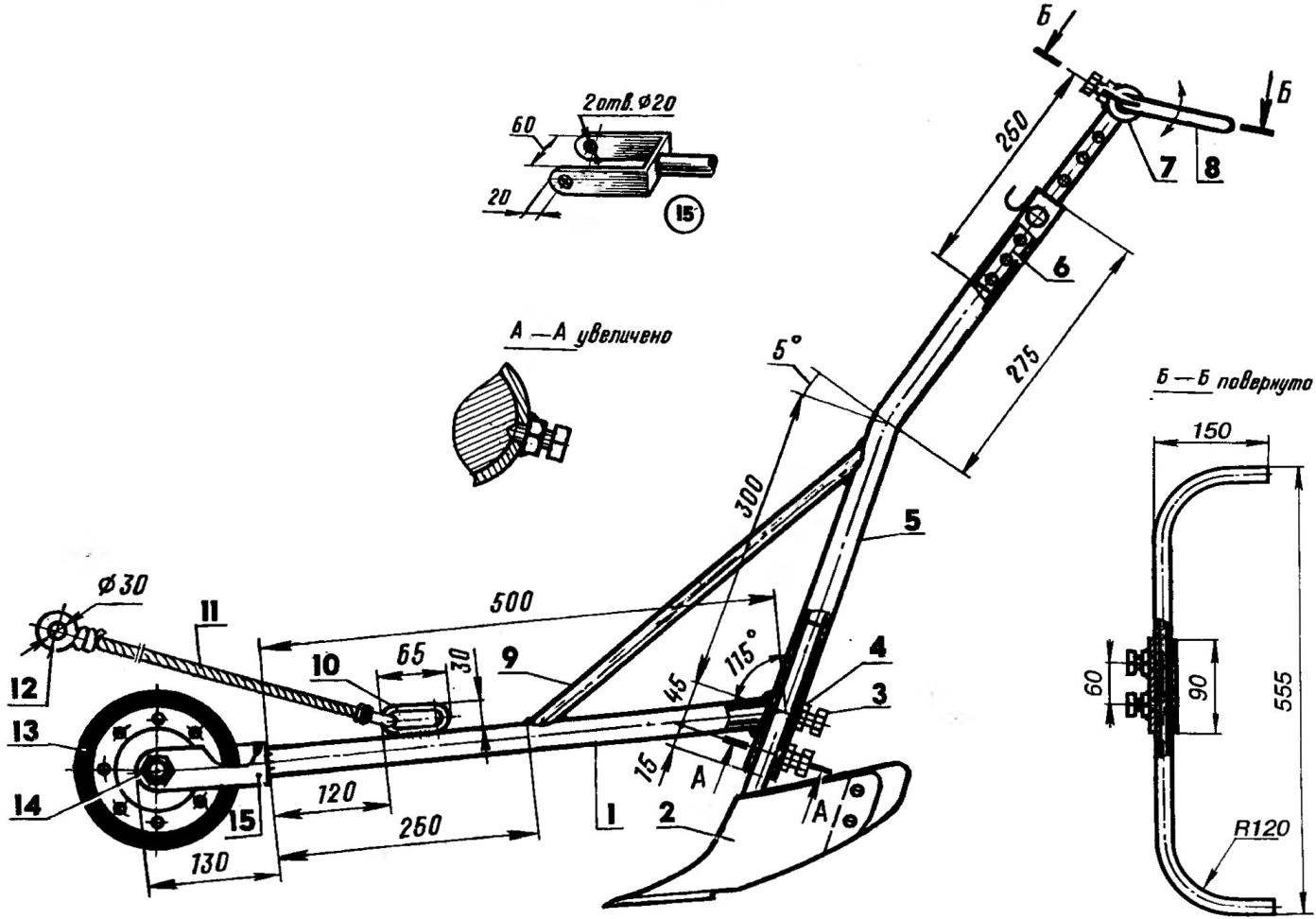 Fig.Z. The plow:
1 — shingles (“stainless steel”, sheet s2, 2), 2 — segment (from koseki), 3 — holder (steel rods Ø20), 4 — strut triangular (STZ, sheet s2) 5 — M6 screws with countersunk head, M6 nut (4 PCs), 6 trailer (Сг5, sheet s2, 2 PCs.).
Blanks were cut on the flattened, bent to the desired profile and welded. To wear segment of kosarka, it is highly durable for wear. Working edge sharpened by the characteristic of tillers angle to the horizon.
The feature of mounting the plow: the tool holder against the bolts and strictly axis — slotted groove to help retain the working position of the plow when you change the size of its penetration. First, holder was just “stuck” weld, to adjust the plow in the horizontal and vertical axes, and then finally welded.
Wheel diameter 165 mm for propolice-Hiller taken from the garden truck. However, experience has shown that this size is too small, it would be the wheel rim diameter, for example, 250 mm with approximately the same width of the disc. On a “big-wheeled” car to work without an assistant — it is better to overcome ruts, potholes and other obstacles.
Rod with arms in the present embodiment is a bit complicated design. This allows you to fit a particular operator.
You can also turn and folding rod, which creates additional convenience in transportation and storage of propolice-Hiller.
With the emergence of potatoes and (as if competing with them) hated weeds gardeners together are taken for… old-fashioned chopper. Was no exception and before the author of these lines. But, pretty namozolil on weeding hand antiquated tools, the pack has to join an innovative creativity. Good sometimes purchased good facility for exercise for modernization — cultivator-pollinic. Manual, of course. Domestic and quite affordable.
Immediately faced with the disadvantages inherent in this technique. First, I (like, apparently, and other farmers) were not satisfied with a small width of the “factory” pollinica. Second, wish a lot of the very best knife blade (far from the optimum sharpening angle, mild steel from which it is made). Third, the “mechanics” and then “stuck”…
But it turned out nice. In particular, the special struts, allowing for the processing of the aisles come close to potato stems.
Experimenting with purchased minitechnology, came to develop their own technical solutions. The result is a CULTIVATOR-PROPOLIS, proven in the cultivation not only of potatoes but other crops. Work on it comfortably together, moving through the rows with the speed of the average pedestrian. Although, if you try and push the performance will be even greater. And a beacon will serve as the front part of the frame. More precisely oriented to the middle of the aisle support wheel as the tiller, mixing in the surface layer of soil, is simply not visible in the formed ice.
Attempt to make the cul-tivating paw more noticeable due to the additional installation of a vertical limit switch. But this idea soon had to give up— too many “small things” clung to such fanciful “hoe”.
Option, the thumbnail of which is shown in the figure, is designed for inter-row treatment of potatoes with planting width of 0.5 m. for Those who are used to different norms of seeding, will have to make appropriate adjustments.
Paw cultivator is easier to take ready (for example, from a scrapped farm). But you can make yourself, the more that basic dimensions on the sketch provided. At the top of the paw has a collar with corrugated-type “mouse teeth” (details about the implementation itself, see No. 1 of the journal for 1993) at the ends for fixing in the corrugated cheeks swivel bracket and subsequent tie bolt M14 with nut. The result is the ability to easily, quickly and widely to change the angle of the cultivator.
Probolic-commerzreal is also better to borrow machinery. Rear mounted a homemade frame, he along with a cultivator (swivel!) forms a kind of hinge, the axle of which are two steel bolts with M6 nuts and washers. And for luring knackered and proprietarty weeds from conglomerate, formed in the working area, is a heavy multi-link chain, loosely hung on the end hooks. The elongated sgibateli on the surface of the stems roots of weeds in dry Sunny weather, wither and die.
Applied cultivator-propolice U-shaped turning handle is virtually no different from the previously considered equivalent. Another thing introduced in this design the spring (made of steel 1,5 mm wire) with chain latch and hook. So simple, it would seem that the device plays a special role: serve as and indicator, and a load controller being experienced during the operation of the cultivator-propolis. It also performs the function of clamping the working bodies to the surface of the soil depending on the condition of the latter. 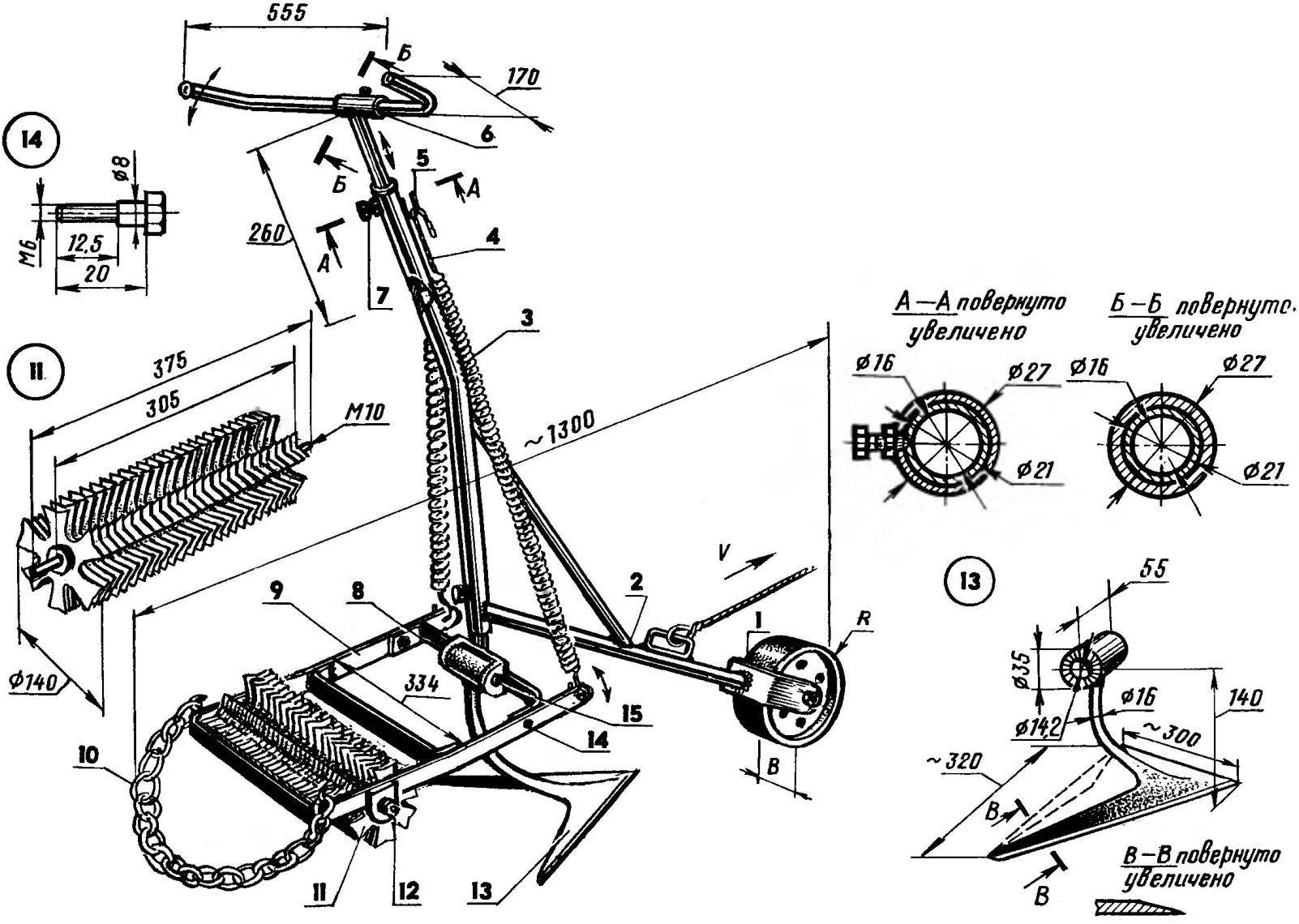 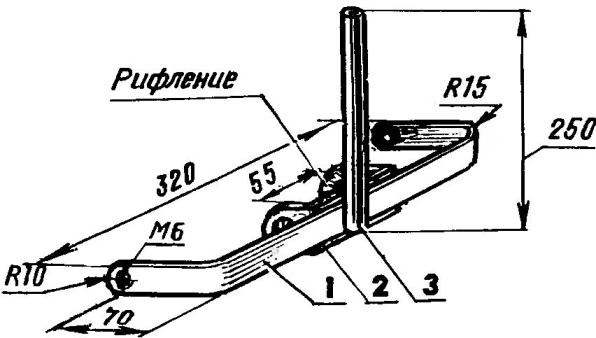 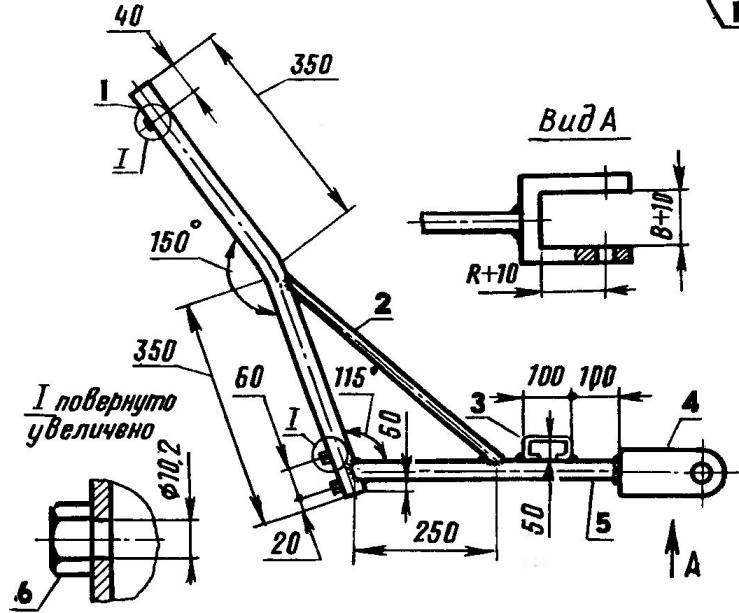 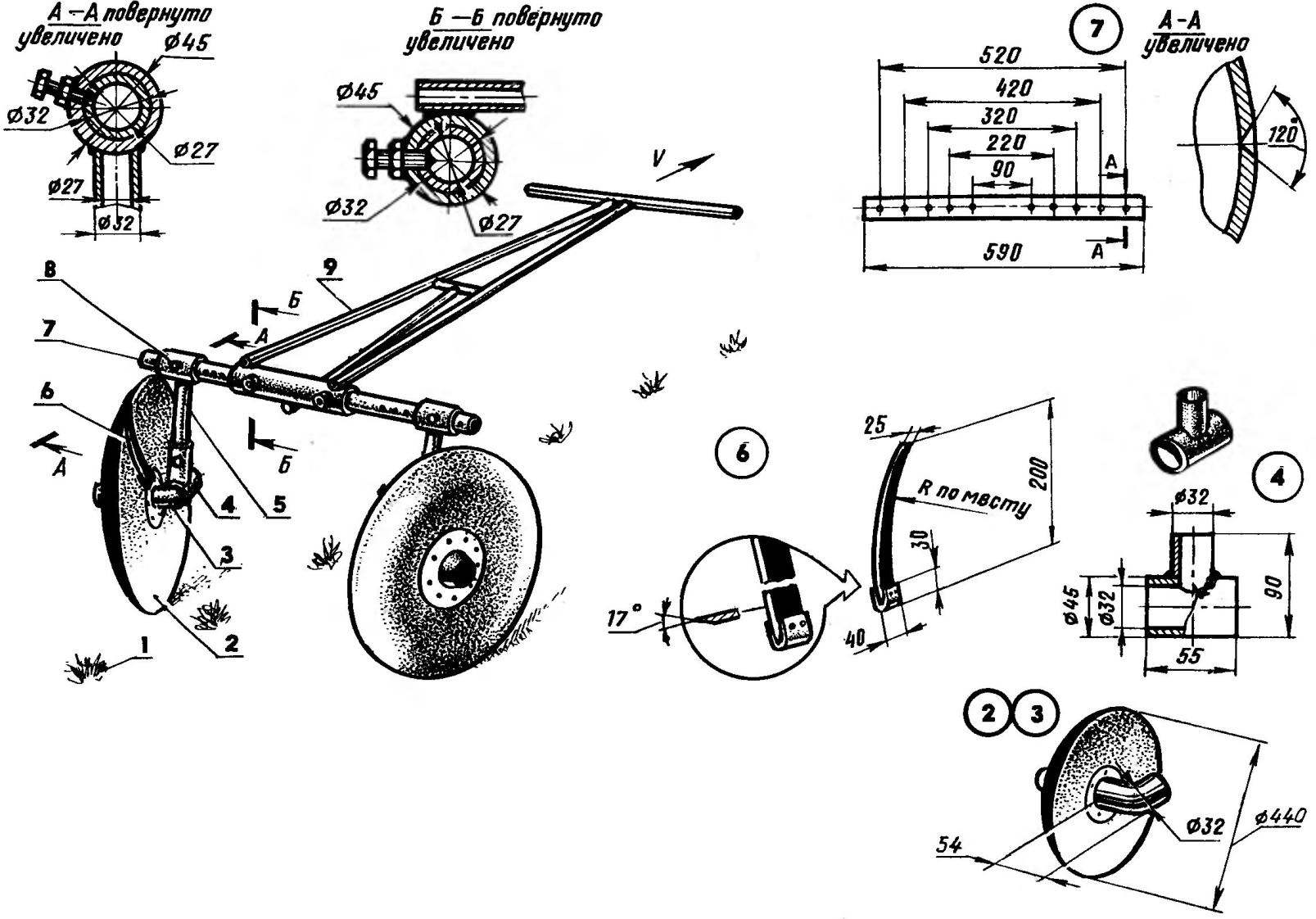 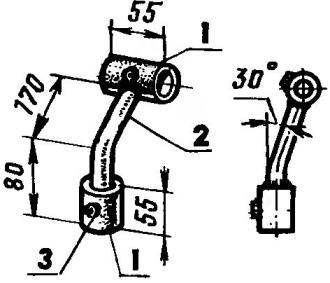 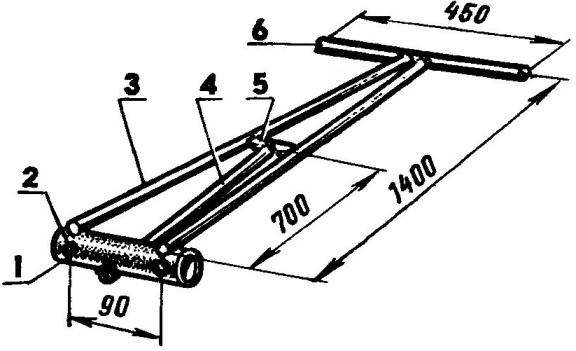 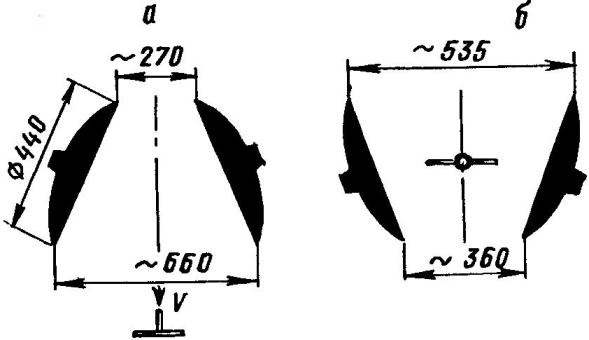 Fig. 8. The adjustable disc Hiller:
a — breakdown, b — convergence.
The load is naturally increased when working on heavy crude and sod plots. The soil sticks to all elements of the design, is hammered into the drum propolice…
Helps occasional shaking of the unit. To run faster and more efficiently, I recommend to the crossmember frame weld propolice small thrust washer (Fig.2 conventionally not shown). One only has to pull the handle up, as they abut the rear ends of the legs. Well, the jerk will cause the shaking of the structure itself, resulting in all nalip immediately fly off and technology will once again be ready to work.
And again. Make a long hook type poker 6 mm “rod”. Hang this tool while weeding on hand to the extent needed to quickly clean the frame or, say, the same starry prophalytic from entangled roots and other things.
With the mechanization of weeding, we will consider, understood. On stage — earthing up potato plantations. Any gardener knows firsthand, and from their own hard-won experience how difficult this work is. And the time it takes, usually a lot. Exhausted, even if we take his assistant the plow-Hiller, the benefits of which are outlined in the previous issue of the journal.
To improve the situation may, in particular, considered the use of the plow, if you install it instead of the cultivation legs.
But there is another, radical solution: to get more specialized equipment.
DISC HILLER you here will not disappoint. As the above mentioned designs, this improvised Assembly may be controlled by a single operator. But it is better to work with a partner, then everything goes faster and better. Both drives (and they recommend to take ready-made from potato or other agricultural equipment) if done in accordance with the sketch (Fig.8) the adjustments move easily and smoothly, leaving a smooth row with okuchit all the rules of farming plants.
With high performance data, the proposed device it is available for making it with any homebrew. As they say, it would wish. Hiller comfortable and quickly and easily disassembled for transport and storage. And with the discs (especially when they are from the production of the potato) is no hassle. Smaller (therefore easier) working diameter ready for quick Assembly hub, is resistant to the abrasive action of the soil material knife. Well, the blunt disc blade — it is always possible to sharpen on the sandpaper.
Hiller recommend to equip, as shown in Fig.5, two Crescent-shaped scrapers. As the material in their manufacture is the best fit canvas old, long disused, hacksaw on wood.
Following maturation, the tuber comes finally the time to harvest. Here, too, it makes sense to move away from antiquated technology. For example, to reduce “labor costs by getting a” to use special shovels to the hinge, above the level of the usual “nastupny” pad 60 mm. Can be successfully used devices, the description and drawings which are repeatedly published in the pages of “Modeller-designer” (see in particular, № 7’71, 8’71, 3’72, 11 ’73, 5’81, 7’81, 10’81, 11*82, 3’85, 9’87, 9’92, 10’92, 7’94 of the journal).
From my own experience, I recommend digging of matured potato plow with shingles. Last year, for example, this technology allows you to quickly and without loss to remove the entire crop. It was nice to see after the pass named plow the first row of tubers were formed in the furrow one-to-one: clean, vigorous.
The blade during digging was installed so that the toe it went down without cutting the tubers themselves. Runs through the row. After setting the potatoes were dug the rest of the rows. Moreover, beforehand the tops sidelong look, then nothing can interfere. And the digging was carried out three, two in front pulling the plow by a rope, and the third pushed him from behind. Case argue. I am sure you will have no worse!
M. VALUY,
Chernihiv oblast,
Ukraine