With homemade furniture before the home the master always gets the main problem is how to connect individual parts which mount to choose, it was a simple, but reliable. The course is everything. from simple nails and screws to finger, complex glue joints the use of bolted fasteners, metal parts, shaped profiles, depending on what he can and what has the joiner.
At the same time, there is a very easy and simple connection as possible suitable for the manufacture of handmade furniture, is the so — called counter-grooves when the parts are equal to each other cut outs which are mutually out-form a kind of lock that does not require almost any additional bonds.
Visual confirmation of clear and practical illustration to the above-mentioned connection — the proposed design of unusual chair.
Design features
Surprising in that chair that, despite the relatively large number of parts, all of them connected without any metal fasteners or glue studs. The design has the required strength and reliability. Moreover, it can be easily disassembled, e.g., for transportation, and easily assembled at the new location.
Let us consider the unit chair. There are four main parts: two side panels assembled together with legs. back and seat. They are all Welt-plane obtained from a single material: plywood or chipboard with a thickness of 20 mm.
Manufacturer
The only more or less complicated details of a chair is his curly sides and back, so their contours to make them easier to play given the scale grid. However, for cutting out (however, as well as other items) will need nothing except a narrow (Kursovoy) hand saws.
The figure shows that in addition to the lines that form the shape of the sidewalls together with feet and we cut a window in the middle, there is a cutout in its upper part. The first, vertical, designed for connection of the sidewall with the back, and the second, horizontal. — for seat. In both the above-mentioned parts, respectively, are cut of the same size counter grooves. The more carefully you have completed all the cutting out — the denser, stronger and more reliable connection design details.
Assembly
It is extremely simple, since it involves only the details of the chair, without any auxiliary fasteners. For this reason, the Assembly can be performed in almost any order. For example, in this.
At the beginning connect the side panels and seat. For that seat first approaching his groove on the groove one of the side walls, then in the same way — on the groove of the other side. It is possible to perform and at the same time on both sides, set the grooves up. Since the pairing is pretty tight, to push the seat into the slots of the sidewalls of the can, gently tapping it with a hammer (mallet). It is important that the counter grooves together clearly until it stops. 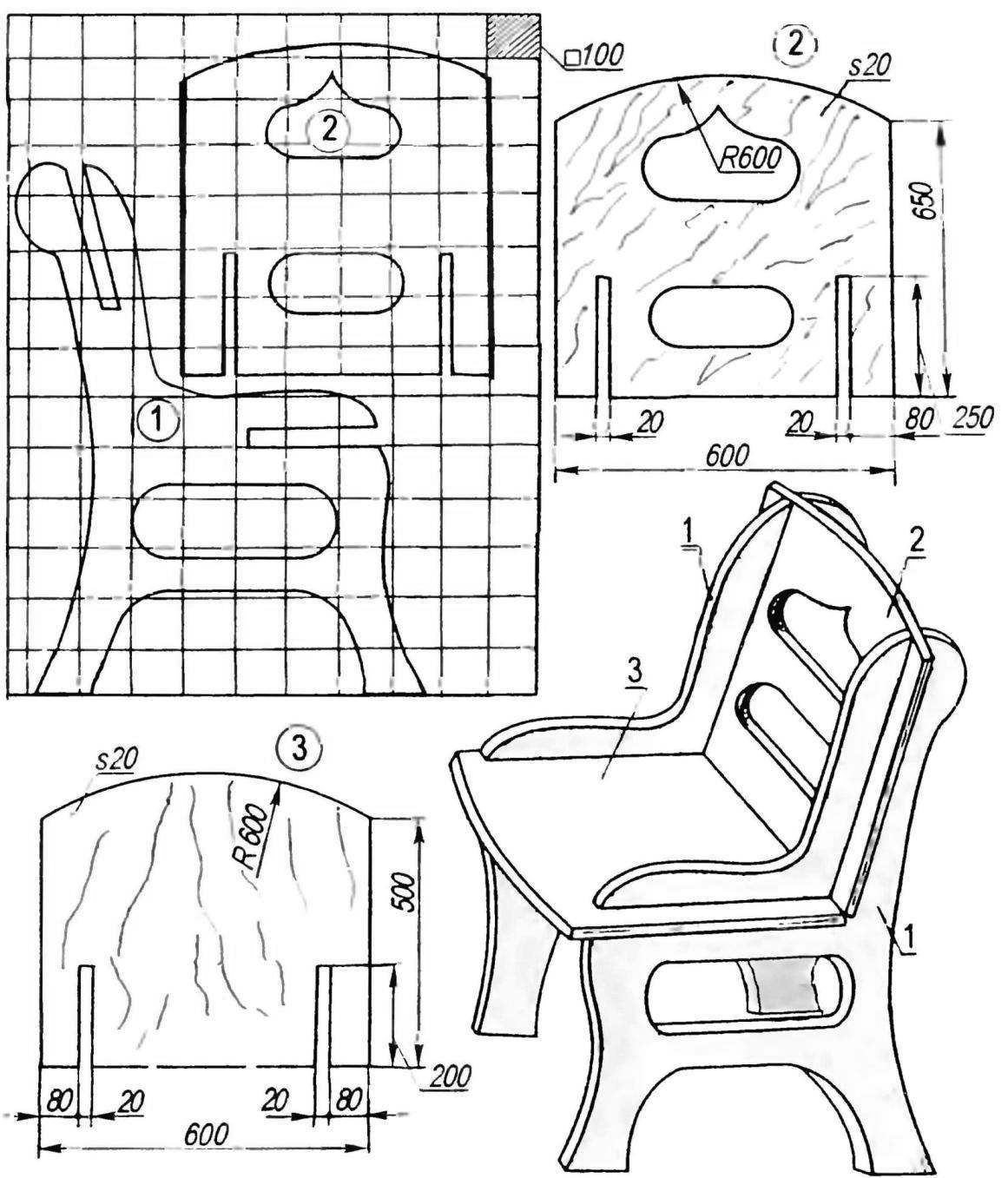 Collapsible chair:
1 — side chair (docking grooves); 2 —back (also with grooves; 3—seat (also with opposing docking slots)
Now you can put the resulting Assembly on the legs and slide the top into the grooves of the sidewalls of the chair back in its grooves, too, until it stops. That’s the whole Assembly — the design is ready.
Finish
It will depend primarily on what material was chosen for manufacturing of the chair. The advantageous of all, in this sense, of course, plywood: its surface often has a beautiful natural texture. And to maintain this figure, you need every detail before Assembly, carefully sand these and refinish with sandpaper with a fine grit abrasive.
Then if desired be treated with a mordant to create darker tones, more time to Polish and varnish the furniture to cover several (two, three) layers with intermediate thorough drying and additional polishing.
If the raw material was a sheet of chipboard, the surface which is not spectacular, it is made from it details of the chairs should not be varnished, and it is better to cover them with paint of your preferred color, also in two or three layers. The first layer is better to apply diluted paint so it soaks into the surface of the particle Board and served as a primer on which the next layer will lie down smoothly and firmly. Not painted chipboard surface to leave not for environmental reasons, the material is considered toxic, and the paint insulates it.