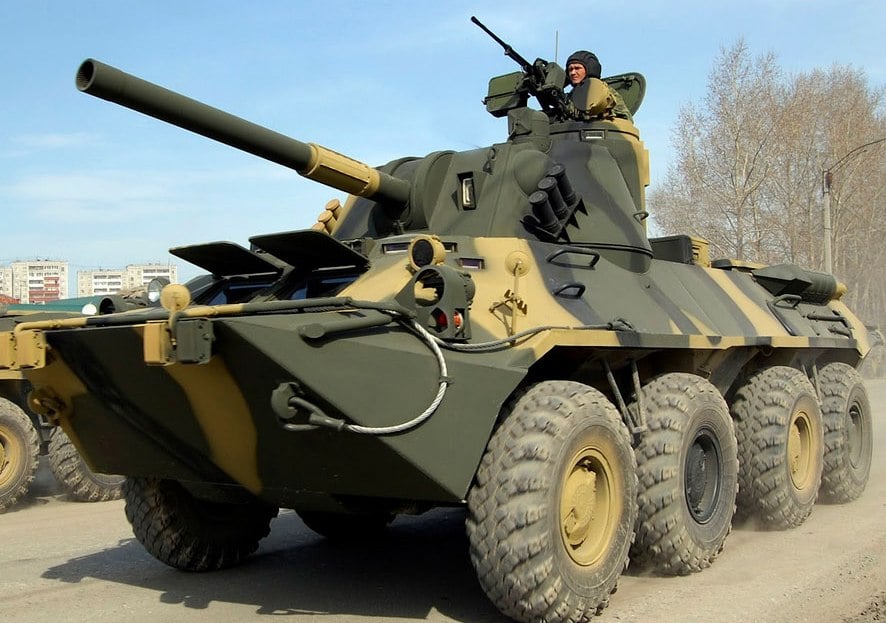 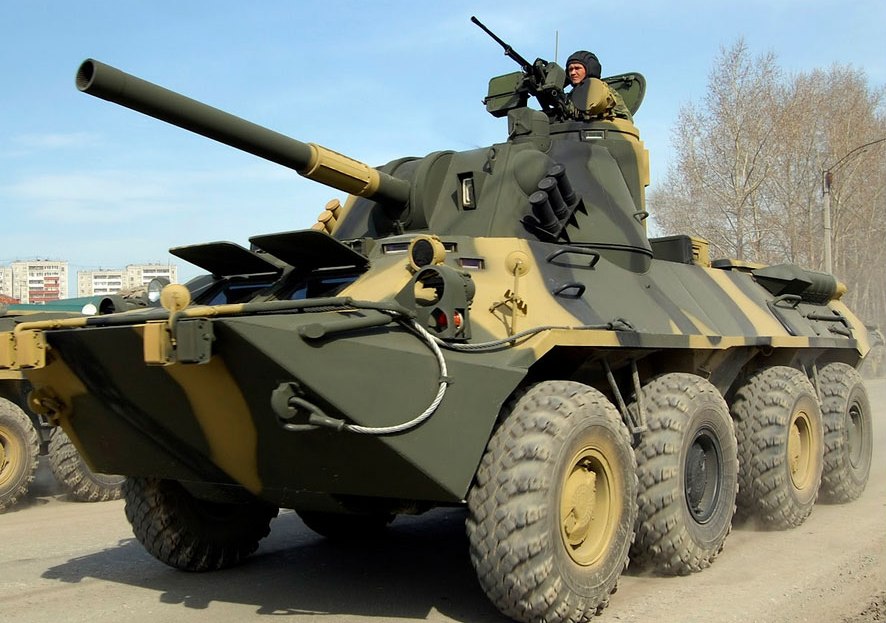 The military doctrine of the USSR was for the use of airborne troops (VDV) to lead the fighting of the enemy in the course of large-scale strategic offensive operations. This “winged infantry” (often referred to as this kind of land forces) required a considerable firepower, to ensure that could only dowry artillery.
In 1960-e years in service with the airborne troops consisted of artillery self-propelled ASU-57 and ASU-85, the main purpose of which was to fight enemy tanks. ASU-57 with a 57 mm gun CH-51M parachuted parachute, but at the end of the 1960s it was removed from service. More powerful airborne, ASU-85, equipped with 85 mm antitank gun D-70 was quite effective against armored vehicles in the middle of 1950-ies: the distance of 1000 m her piercing projectiles punched 180 — 200-mm armor at an angle of 60 degrees. ASU-85 was part of the anti-tank battalions of airborne troops by the end of 70-ies of the last century. Self-propelled gun carried by the aircraft of the military transport aircraft an-12, An-22 and Il-76, but left the Board the aircraft only after landing. It deprived the landing of the main tactical advantages of surprise.
From the beginning of 1960-ies in the fight against modern armored targets began to use missiles that are more effective than artillery. They had high mobility, as could be carried by any vehicle, airborne, and even to move forces calculation. However, the actual task of paratroopers was fighting the enemy, hide behind hills or use for defense fortifications. On the Navy for these purposes were towed mortars, but they do not fully satisfy modern requirements for mobility. What was needed was a fighting machine or a unified family of combat vehicles, more relevant to modern conditions and needs of the airborne forces.
Given this, in the Soviet Union were the development of a fundamentally new combat vehicle landing BMD — 1. On its chassis and decided to build a self-propelled gun, dubbed 2С2 “Violet”. However, the use of a fairly powerful gun caliber 122 mm, borrowed with self-propelled artillery “Carnation”, led to the fact that the chassis of BMD-1 could not withstand the loads encountered when shooting.
But the idea to use the BMD-1 is not refused, and the next step was to develop on its basis a self-propelled 120-mm mortar 2С8 “Lily”. However, he remained in the discharge experimental models of machinery.
By the middle of 1970-ies at the Volgograd tractor and Kurgan machine-building plants on a competitive basis, created two light tanks equipped with long-barreled guns of caliber of 100 mm. But they were not accepted into service of the airborne troops.
Around the same time the Navy began to receive the tracked amphibious armored personnel carrier BTR-D, unified with the BMD-1, but with increased load capacity, and due to the equipment chassis an extra pair of rollers, and large internal volume. At the same time was the creation of a new 120-mm rifled breech-loading guns 2А51 intended for direct support of ground troops. The development of this weapon began in 1970-ies in TSNIITOCHMASH located in the suburban town of Klimovsk. Then they were joined by the specialists of the Perm plant Motovilikha. The plant’s designers headed by Yuri Kalachnikov under the supervision of Abner Novozhilov from TSNIITOCHMASH created a universal artillery system.
Initially, the developers of the tools 2А51 task was to get his missiles on its effectiveness is not inferior to the 122 mm howitzer shells, D-30, and eventually created the shot with caseless loading: before firing the shell and the cap (charge, placed in a “soft” shell with locking device) were merged into a single shot, such a unitary cartridge.
In turn, the use of caseless charging led to the creation of a combined semi-automatic bolt gun with a plastic obturator (f) gases, simultaneously the employee and to Doyle shot in the barrel. In 2А51 first carried out constructively against the scheme “gun — shot”, the main feature of which consisted in applying a shell with a finished rifling on the master belt (special high-explosive, shaped charge, rocket-assisted artillery shells). In addition, applicable was 120-mm mortar shells and guided shells “Kitolov-2”, novodevitsa using a laser designator in the most unprotected place — on top. Since the trajectory of the shells 2А51 you’ll be very steep, the efficiency of the damaging effect of approaching conventional high-explosive howitzer shells of 152 mm caliber. 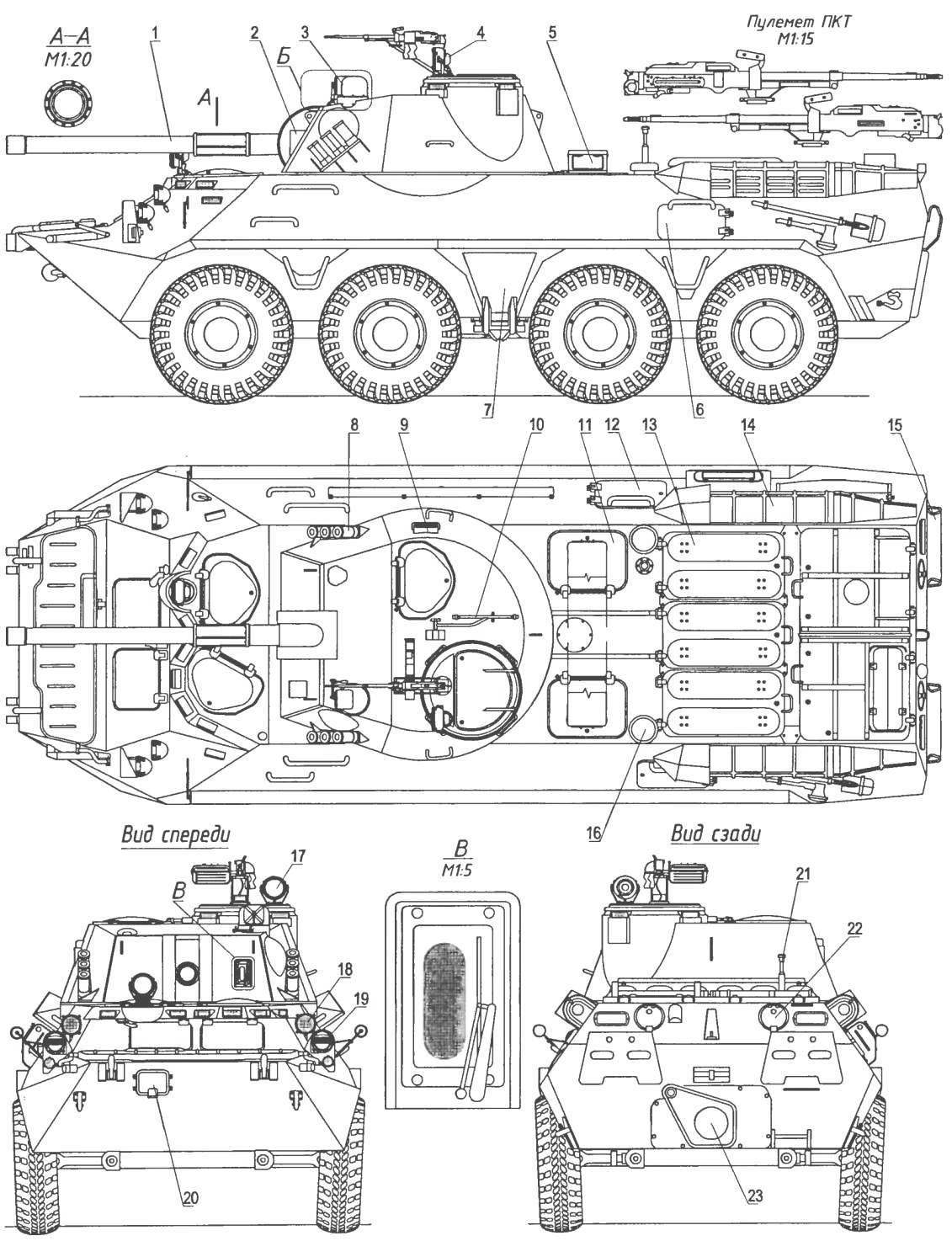 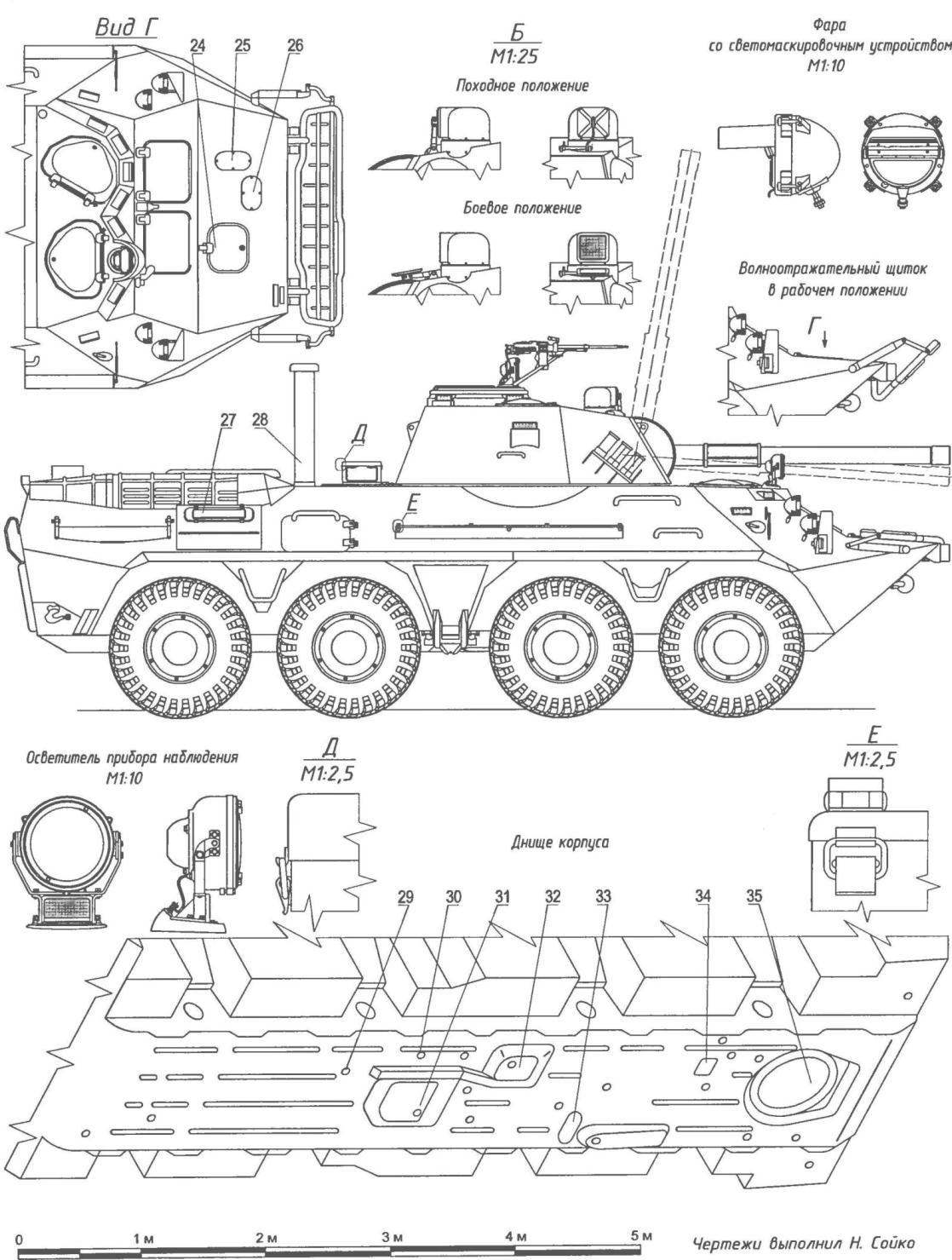 2С23 self-propelled gun “Nona-SVK”:
1 — 120-mm gun 2А60; 2 — sight direct fire 1П30; 3 — panoramic periscope sight 1П8: 4 remote-controlled machine-gun installation; 5 and 27 boxes of ZIP; 6 — cover HLF; 7 — fold side door; 8 — launcher system 902В “Cloud”; 9 — periscope surveillance device; 10 — bracket with a measuring base; 11 — the top hatch of the crew compartment; 12 — cap niche for batteries; 13 — cover vazduhoplov; 14 — the outer casing of the silencer and ejector; 15 — rear bumper; 16 — hood engine air intake when operating afloat; 17 — illuminator surveillance device commander; 18 — additional headlight; 19 — lights with svetamaksimova nozzle; 20 — cover the issuance of the winch cable; 21 — antenna radios; 22 — fuel filler cap fuel tank; 23 — valve water jets; 24 — manhole cover winch; 25 — cover master cylinder clutch; 26 — cover master cylinder of a hydraulic braking system; 28 — intake of the engine when working afloat in a raised position; 29 — a hole to drain the oil from the second bridge; 30 — hole to drain the water from the heater; 31 and 32, the pallet transfer box; 33 — technological door; 34 — cover for access to the nuts securing the propeller shaft drive of the fourth bridge; 35 to the inlet water jets
Given that during operations behind enemy lines you can’t always count on the timely replenishment of ammunition, the gun has provided the possibility of using 120-mm high-explosive mines from mortars of armies of other countries.
The placement of weapons 2А51 on the BTR-D has led to the creation and adoption of the airborne versatile artillery systems 2S9 “Nona-s”, which combines the functions of guns, howitzers and mortars.
The need for landing “Nona-s” From aircraft using a parachute-jet system required her maximum relief. Therefore, the case of self-propelled guns produced from aluminum armor protects the crew and equipment from small-arms fire.
Diesel engine capacity of 240 HP and hydropneumatic suspension gave the “Nona-With” greater mobility. Its road speed reaches 60 km/h, afloat — to 9 km/h. Suspension not only provides a smooth ride, but allows you to change the ride height by 0.35 m.
First CAO 2C9 demonstrated the traditional military parade on red square 7 November 1985. In a combat situation the vehicle is tested in Afghanistan, where it proved highly reliable, and with its fire not once rescued paratroopers. Large angle vertical lay guns allowed us to solve in the mountains such tasks, which could not cope howitzers and cannons. After the Soviet withdrawal from Afghanistan of these self-propelled guns remained in service with his army.
Subsequently, on the basis of plant 2S9 for the marine corps and the army has created a self-propelled gun 2S9-1 “Sviridenko”, different mooring sites and increased ammunition.
In 1986, specifically to equip the infantry battalions of the ground forces have adopted small towed four-wheel drive UAZ-469 2Б16 gun “Nona-K” with a weight of just 1200 kg.
Introduced into operation in 1972, the Arzamas machine-building plant, originally specialized in the manufacture of spare parts for cars since 1980 have mastered the production of armored personnel carriers BTR-70.
Beginning in the mid-1980s, the years of perestroika dramatically reduced the volume of military production. This made the plant management to look for ways to preserve the accumulated experience and new markets for their products. At the same time created and new types of weapons.
In 1984 at the Central research Institute “Burevestnik” has developed artillery system 8С23, representing a weapon 2Б16 installed on chassis of the BTR-70. Further development of this armored vehicle at Arzamas factory was more modern BTR-80, which, in turn, was created self-propelled artillery system, the designation 2С23 “Nona-SVK”.
The machine has three branches: administration, combat and security. It is equipped with 120-millimeter semi-automatic breech-loading gun 2А60, the loading of which is carried out manually from non-mechanized boeukladki.
Basic data of instruments of family “Nona” 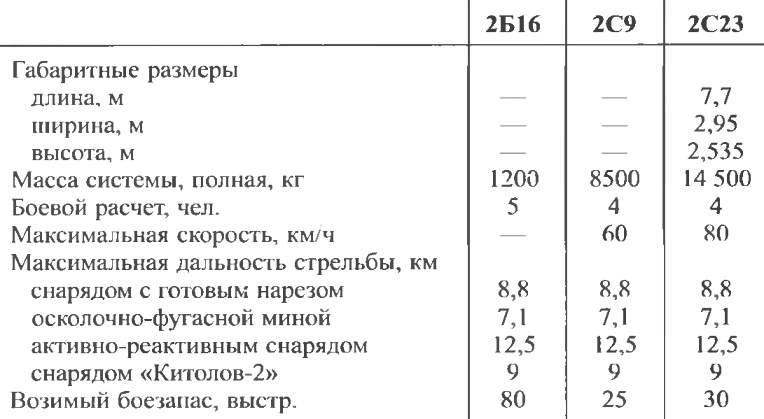 One of the features of the locking mechanism of the shutter is a cylinder with the frame, which together perform the functions of the rammer. With this design charging does not need to expend significant effort to send artistree in the bore, especially at high angles of elevation, when the barrel is almost vertical. The gun is equipped with a device that controls the temperature of the barrel that is directly related to accuracy. The products of combustion of the propellant charge do not fall in the fighting compartment, and the crew of “Nona-SVK” works in nezagazovannogo environment. For action on your terrain vehicle is equipped with a filtered ventilation system.
Gun placed in a rotating turret welded construction, manufactured JSC “Motovilikhinskiye Zavody”. New self-propelled gun “Nona-SVK” enters into force since 1990.
On the side of the turret are six launchers system setting smoke screens 902Б. The housing has space for two portable anti-aircraft missile complexes “Igla-1” and other hand-held weapons.
The commander’s cupola equipped with surveillance devices, TNPO-115, and on its roof can be installed machine gun PKT 7.62 mm remote controlled ammunition and 500 rounds.
Case 2С23 CAO “Nona-SVK”, like the BTR-80, sealed, welded from rolled steel armor plates and protects the crew and paratroopers from bullets of 7.62 mm caliber and shell splinters, and frontal armor — bullet of caliber of 12,7 mm.
Four-axle chassis has a wheel formula 8×8; suspension is individual, torsion. Bullet-proof tires with a Central control system of air pressure allow the machine to continue and in case of failure of one or even two tires. The two front-axle driven.
The car is equipped with one diesel engine KAMAZ-7403 260 HP For the movement of the water is used a water-jet propulsion.
N. VASILIEV