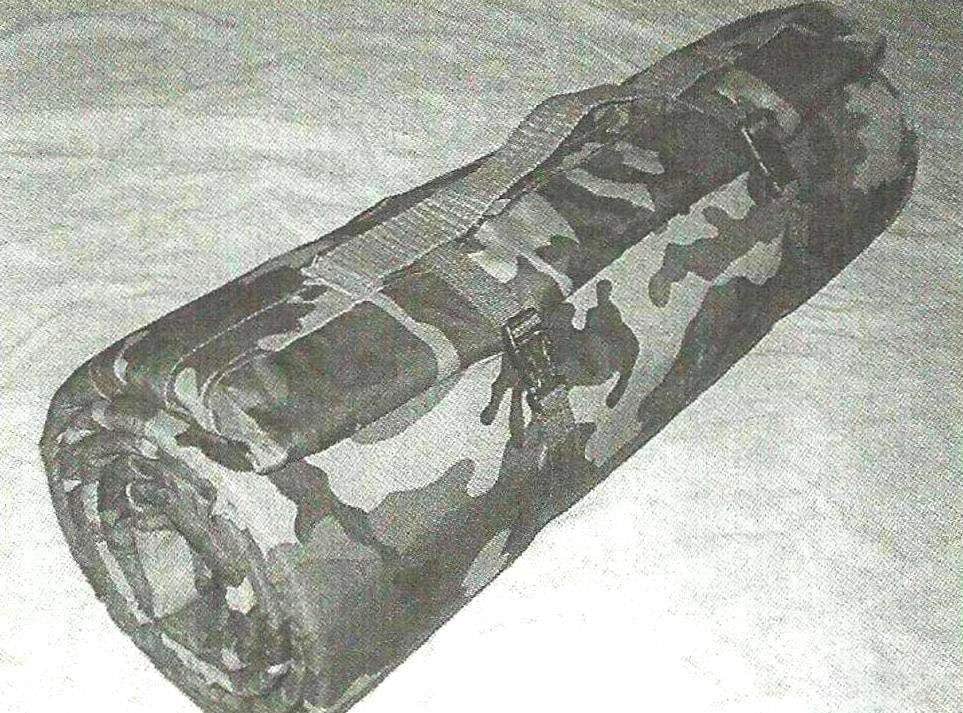 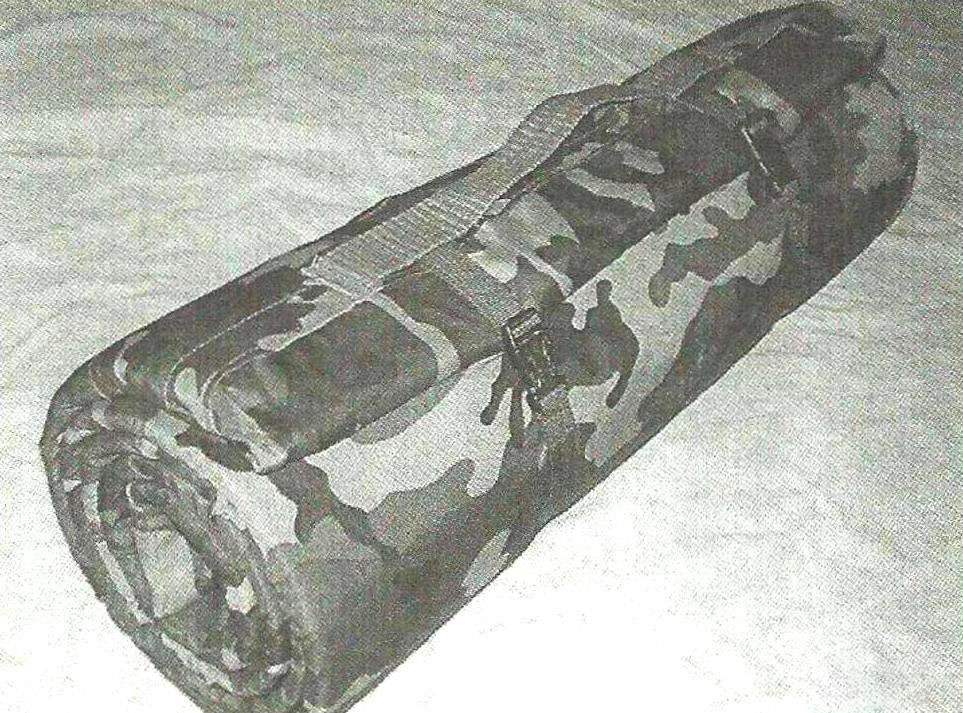 Just note – it’s not my idea, I offer only the version of her performance. Came across this idea in some military magazine. The conversation was about the Mat-foam: “…However, such floor mats require an external case. This allows you to transport them on the outer attachment points of the container, and also sits on the folded Mat, placing one directly into the earth and Maraya him. In addition, folding the Mat, you can sew two longitudinal and three transverse strips, ending the loops at each end. This will allow you to use the product as a stretcher by inserting two trailing poles; and as a bed by inserting the two extreme cross-section of the pole and setting the Mat on four points of support (at the intersection of the poles)”. Everything is very clear.
The last method of application, however, only makes sense in terms of long-term Parking or temporary dwelling in a tent camp. But as a stretcher in a group hike at least one pad in a group, think is necessary to have.
Only I decided to make the cover a separate product that will take all the load, and simultaneously to protect the Mat from dirt and damage. Because the case may be, if necessary, and wash, and repair.
The product is designed for ordinary roll mats”foam”. Folding “bellows”, it is hardly fit.
Inserted in loop poles allow the migration affected fewer people and with less effort. If the poles would not close or will not have time to search for them, the size of the side loop allows you to freely push a hand. During loading of the affected lanyards should be downstairs to work on “compression” and not “separation”. Although the guys during the competition managed to do the opposite and design of the stand (a “log” there were very “plump”), but it is better not to do it. In various case competitions-stretcher “involved”, not just washed, but to fix it I had never. 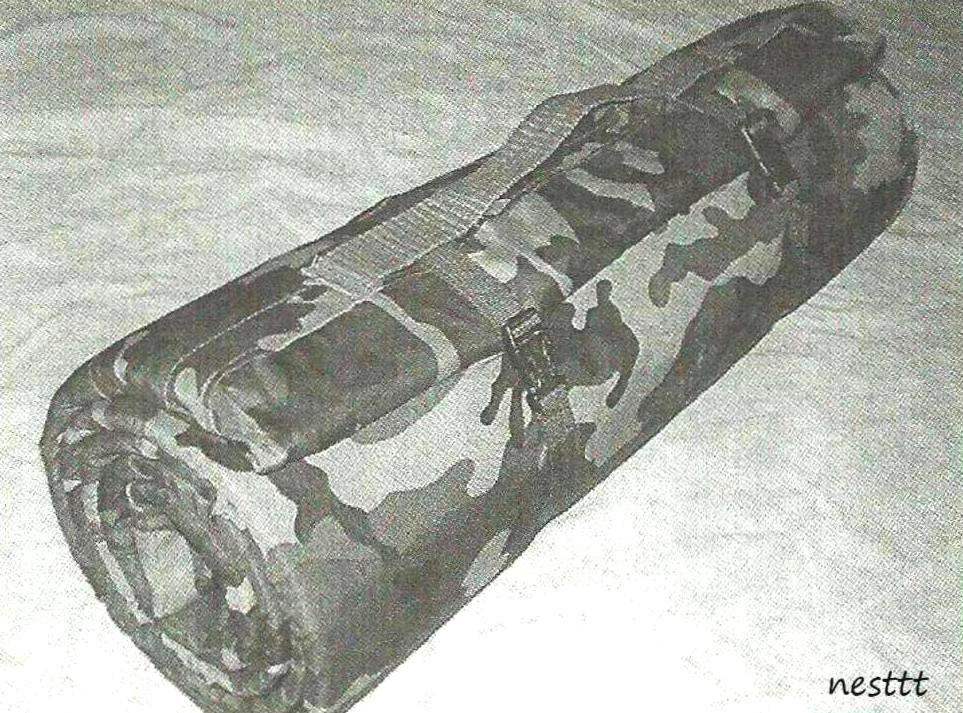 Photo 1. The Mat in the cover in the stowed (collapsed). Tie down straps laid inside

For the convenience of travel for greater compactness in the competition case is used without a Mat. The son tried another method of application: lie down with a sleeping bag on the Mat, but inside the case. In his words, a thin sleeping bag fits in the case loosely.
THE SEQUENCE OF MANUFACTURING
At the sewing part I’m not a master, so I will try to outline just so you can sew the same “expert” like me.
As the material of the case took nylon camouflage fabric that the store was called “the tent”. The width of the nylon straps of 30 mm was considered optimal. Dimensions of case are designed for the standard Mat size 1800×600 mm to 10 mm thickness. If the size of the others, it is necessary to make appropriate amendments, including an allowance for the thickness, the average remains the line in the middle, and the deadline is sewn with the same gap.
Cut from a single piece of fabric with dimensions of 2×1,5 m and “ahead of time” “extra” tried not to cut.
So, on the face of mark out two rectangles with dimensions of 1800+10×600+10 mm with appropriate allowances (see drawing) and mark the fixing tape slings. The layout is best to duplicate on the reverse side. First longitudinal sewn slings. Start – end of seam around the outer edge of the upper and lower transverse strop. On the reverse side are placed pieces of fabric gain of about 25 see, I Have this as used nylon ribbon and pieces of fabric it is necessary to seal (tuck) the edges. The seams on the edges of the sling further enhances the seam “zigzag”.
Then tucks inside the future cover the top edge across the width of both rectangles. He is the tissue gain the upper cross straps, valves, and handles for carrying the Mat. 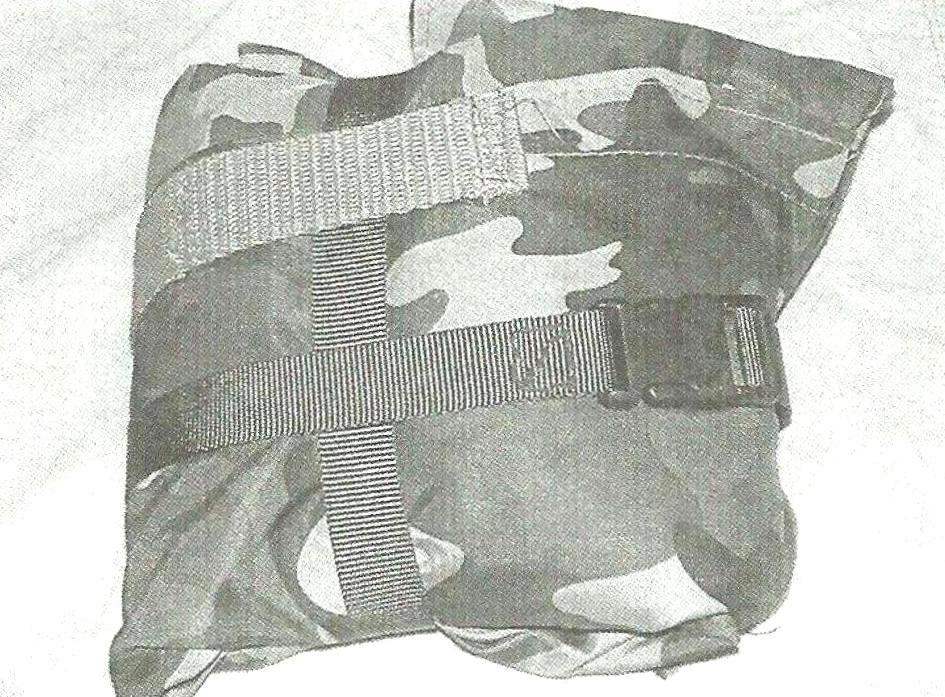 Photo 2. Case without a Mat in a collapsed form. Tie down straps buttoned “cross” 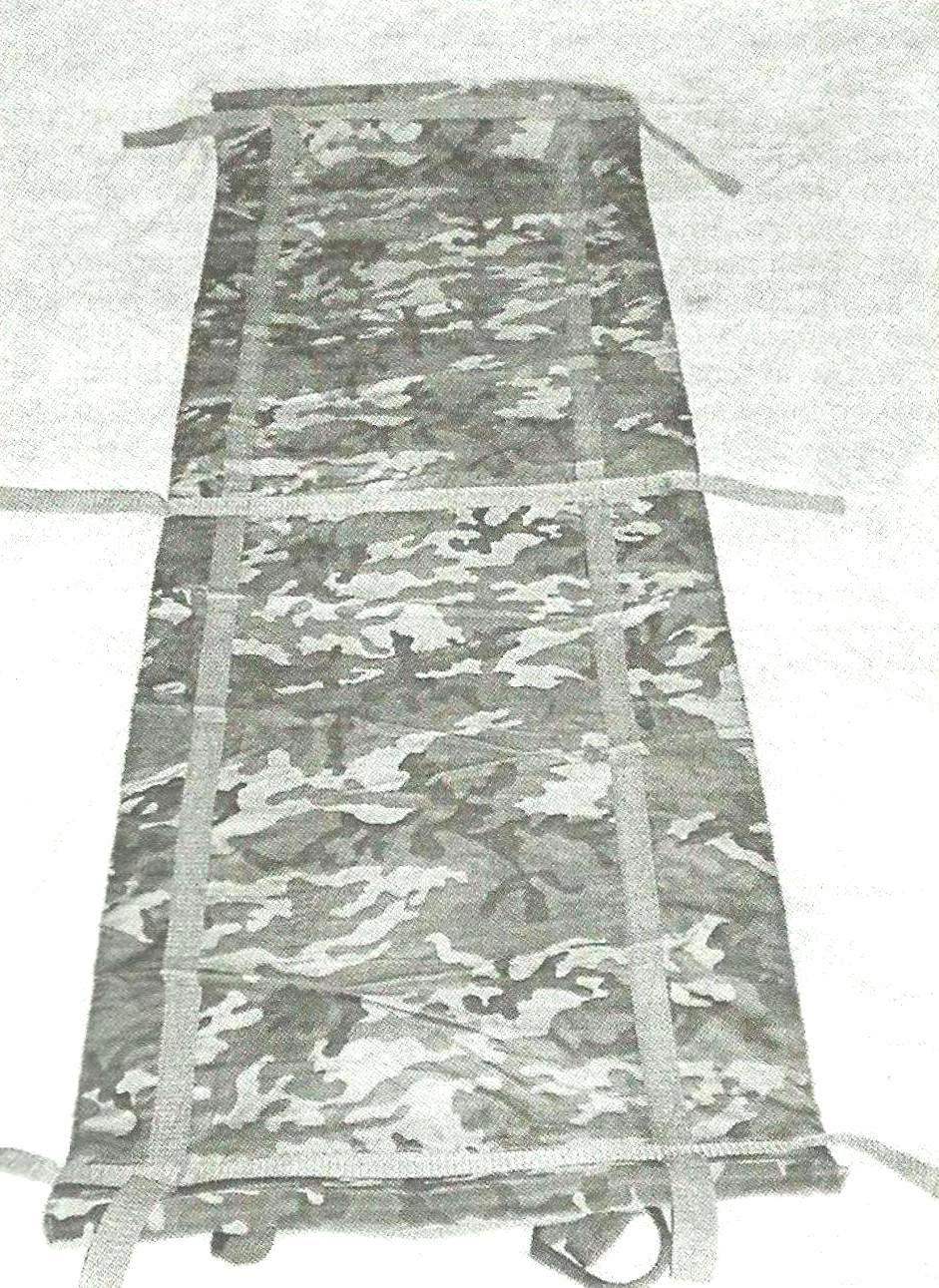 Photo 3. The underside of the cover with lines
In the middle and towards the bottom, on the inside, sew the fabric gain (I have the middle of nylon tape, and the bottom is not enough – there is a strip of so-called “tent” of fabric).
Next, sew the transverse lines, which must carry the main burden, so that they should not spare yarn and time. It is better to make it than without end to repair and remove imperfections. The suture does not reach to the edge by 25 mm. Edges carefully zastrahovatsja.
Then comes the turn of work on the valve. It is 2 sided and cut out 2 pieces of fabric. On the inside I put a thinner “awning” cloth. The pieces are sewn together on the reverse side. The inner edge is 10 mm wider (ACC). After knitting the fabric is cut along the perimeter seam, leaving not more than 5 mm, and then turn the valve on the front side and chicken heads to the edge of the double seam.
Sew the valve in place, with tucked inside edge. For fixing the valve can be pristroit “Velcro” (“burdock”). I have the flap just tucked in.
Then the case is folded inside and stitched side and bottom double seam. 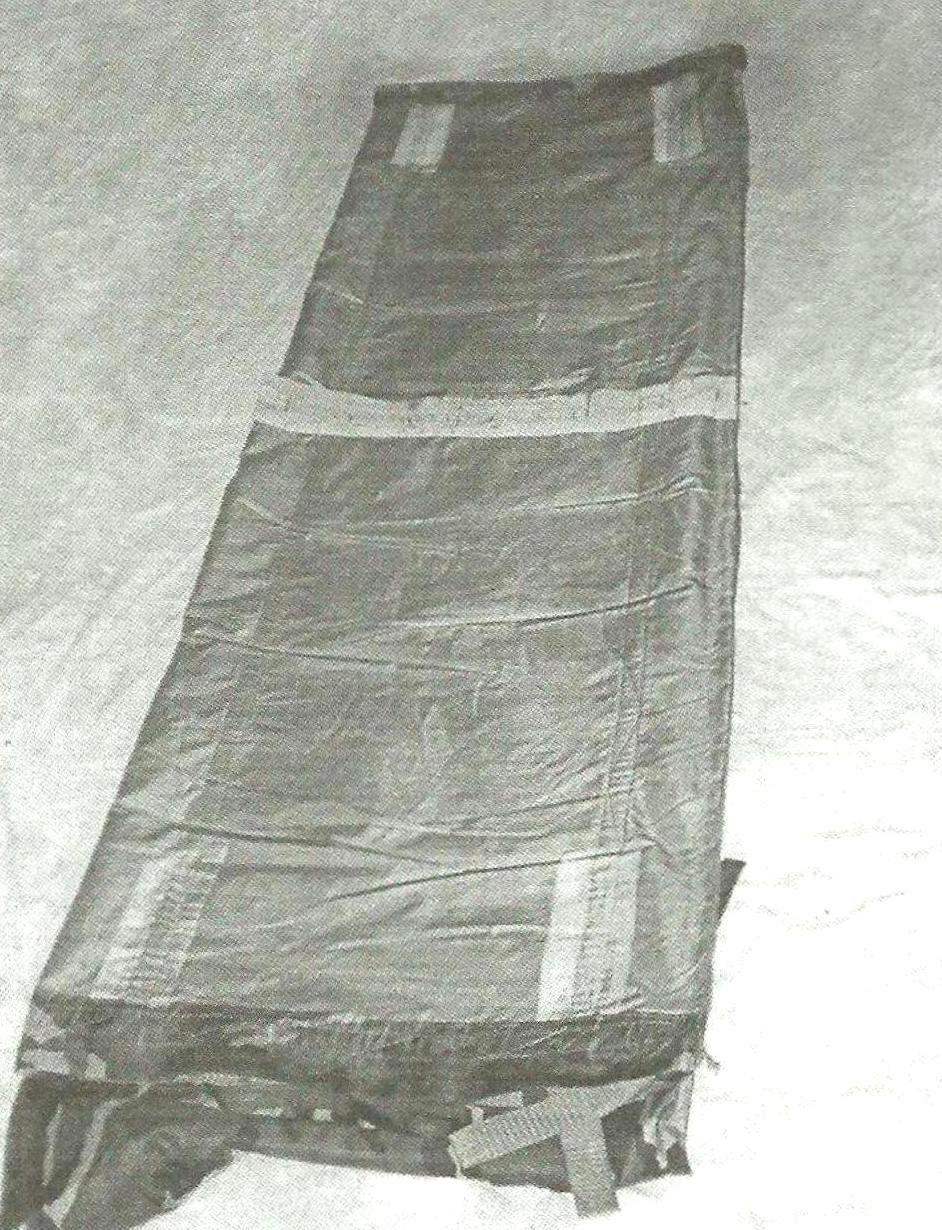 Photo 4. Seamy side with the cloth pilonidal case turned inside out. The side where the sewn slings is the lower part that rests on the ground. And from the front side at the top sew a carrying handle and mooring. 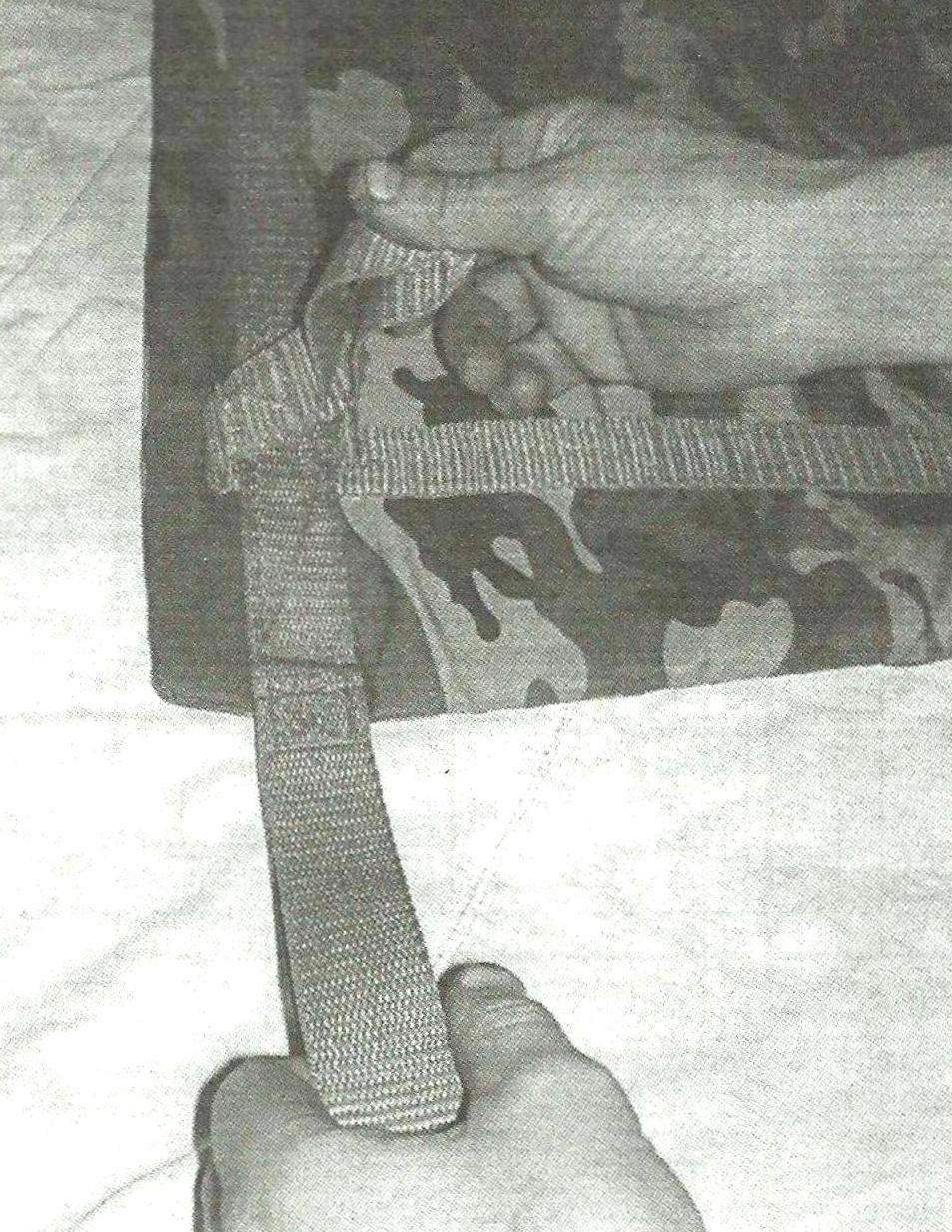 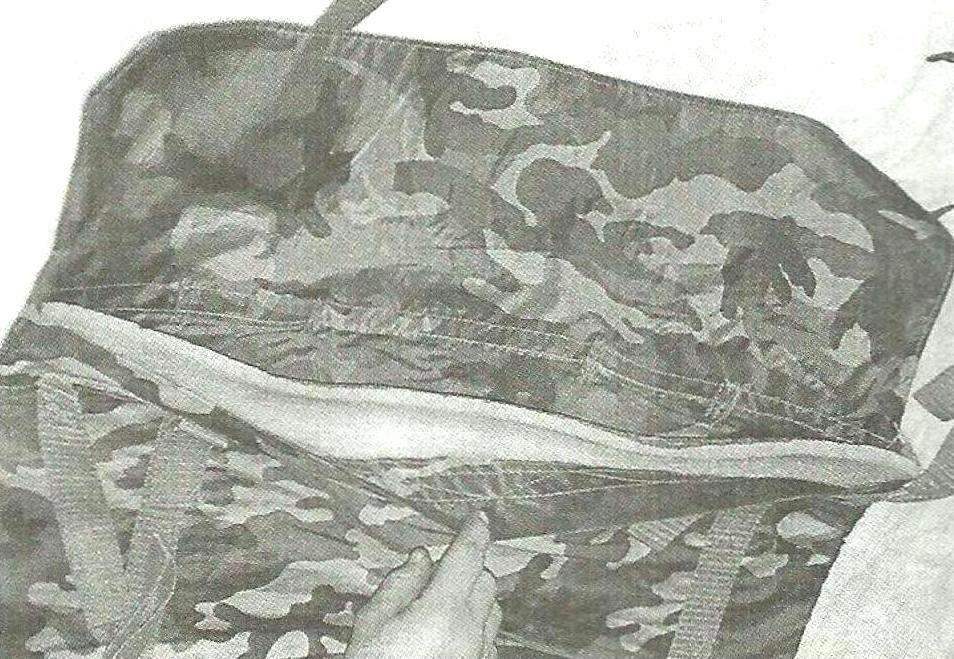 Photo 6. Valve cover
Finally, make a loop at the ends of the strop. Their is also sewn on the conscience.
The kit is complemented by two tie strap of nylon webbing with the width of 20 mm with clasps “FAS-Tex”. In the open state, the straps remain in place.
In conclusion, I want to say about “stupid” prejudice like that if you took the cable – means you’ll bring in tow; and he took the bandage – cut, etc. But that the unexpected happen, moving a victim can turn into a struggle for survival for him and for the rescuers. You choose.
O. ELISEEV, Syzran