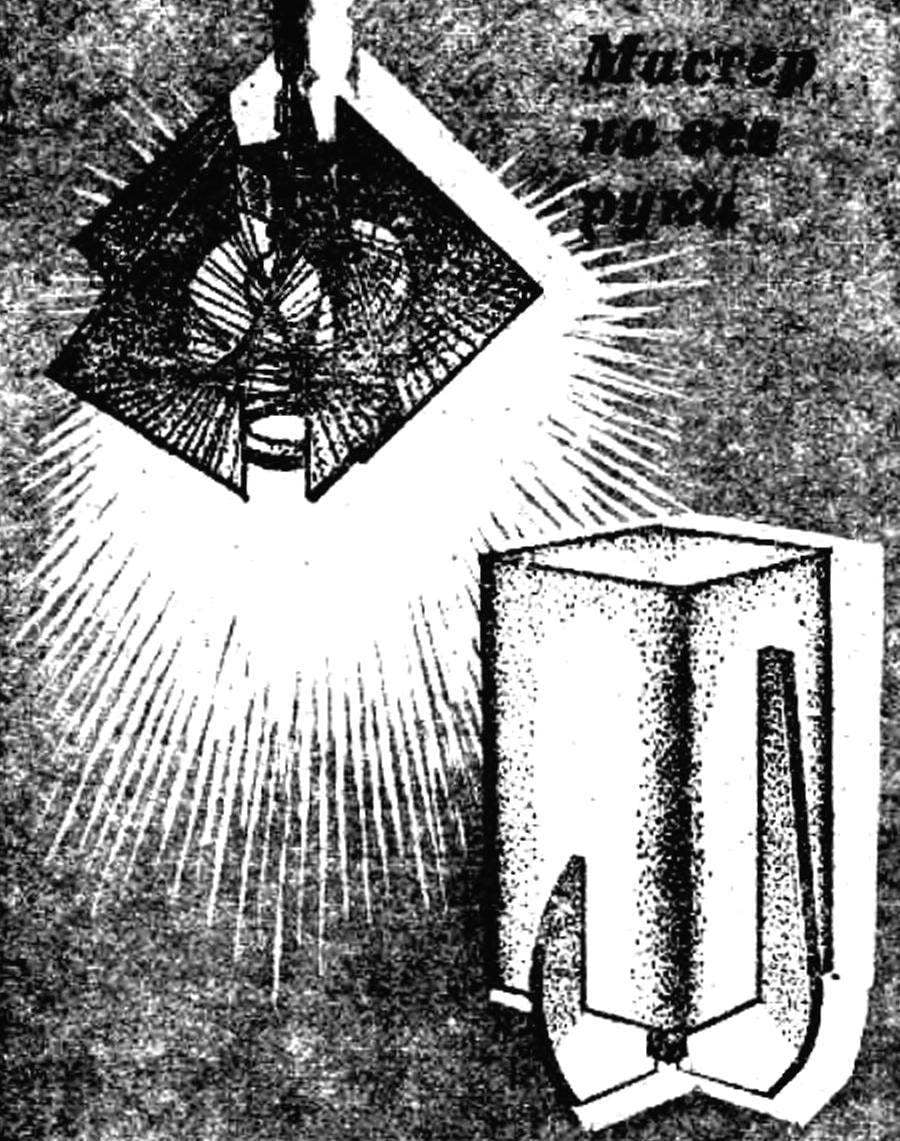 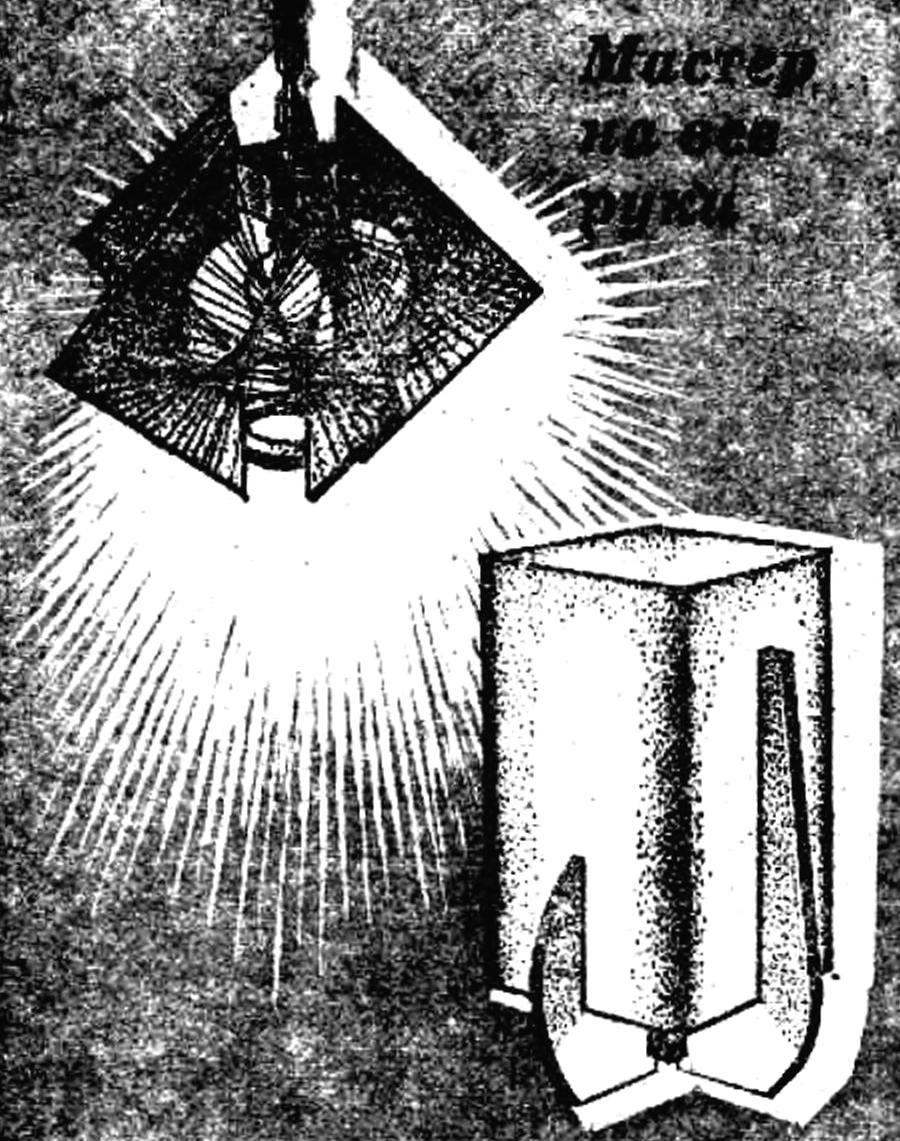 Many household items is easy to do with their hands. This furniture, and fixtures for kitchen and bathroom, and original details of the interior hallways and lobbies. No exception and lighting. Actuated even at home, they will look no worse than the serial favorably differing from the last by its originality. In this collection we offer you two easy to manufacture of the lamp, which can be made from readily available materials.

LAMP-PENDANT
For its production you need only a sheet of translucent plexiglass or polystyrene and fishing lines. Of course, you will need some skills, but they will hopefully appear in the process.
First from a sheet of plexiglass in accordance with a pattern to cut blanks of parts of the lamp. This is best done with a box cutter, sharpened the old blade. The Central hole, you can choose “centralism” on a drill press. If this is not possible, I suggest to use plumbing scribing compass. Sharpen one of his legs in the form of the cutter and resting on another in the through-hole Ø 1 mm drilled in the center of the square, parasite annular groove. Widening it to half the thickness of the sheet, turn it over and parasite the groove on the other side.
The next operation — cutting each of the three blooms on two triangles — you can do it using the same cutter. Face plates gently abrade.
It’s best to carry out, glue the triangles to the package. You can use the rubber glue. First, the ends trimmed with a file, then the scraper like scrappers, next — skin-“nulevkoy” and last plane polished felt round, grated pasta GOI.
Without disconnecting the plates, saw them in the grooves, as shown in the figure. Carefully parasite grooves required for mutual connection details. 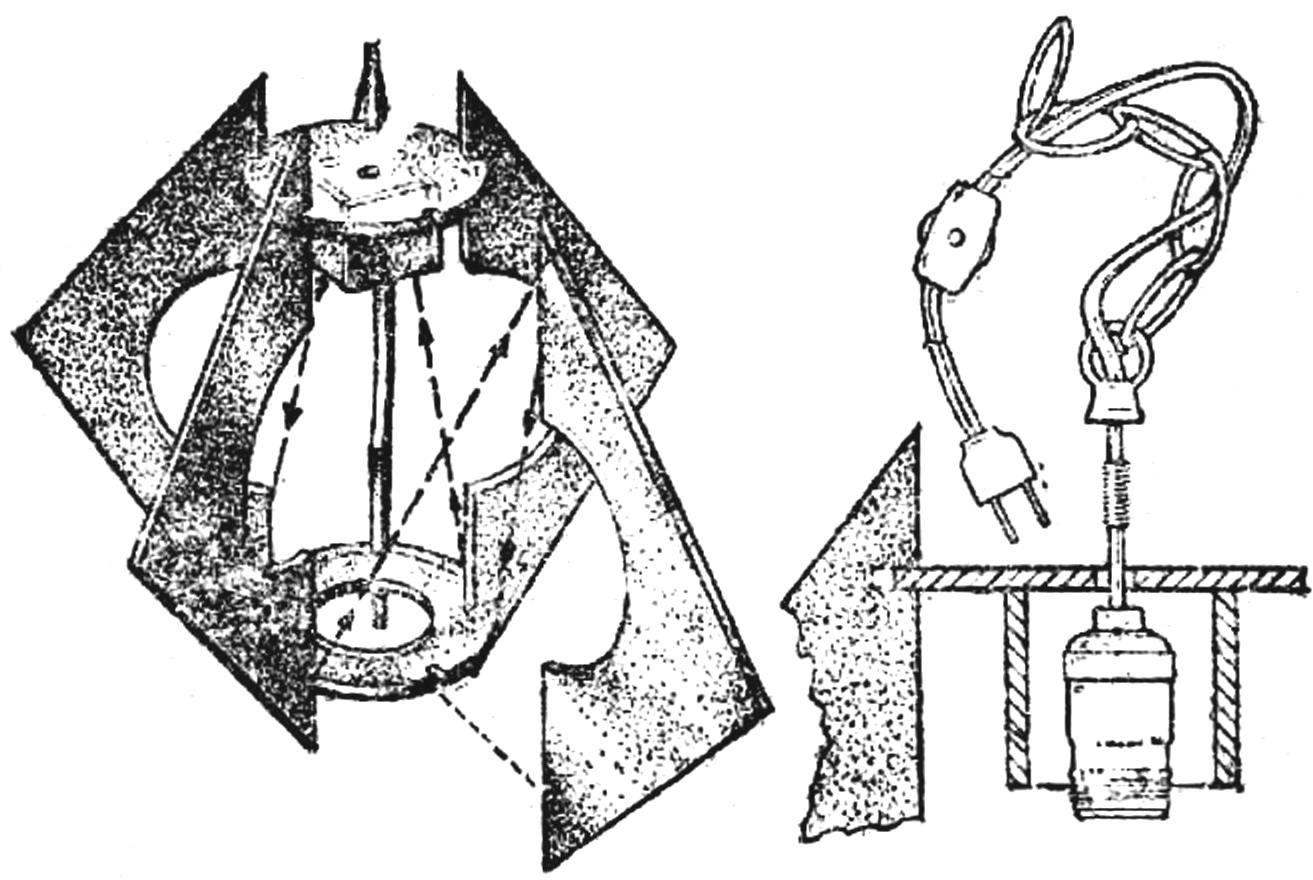 Fig. 1. The Assembly of the lamp. Arrows indicate the direction of winding the fishing line. 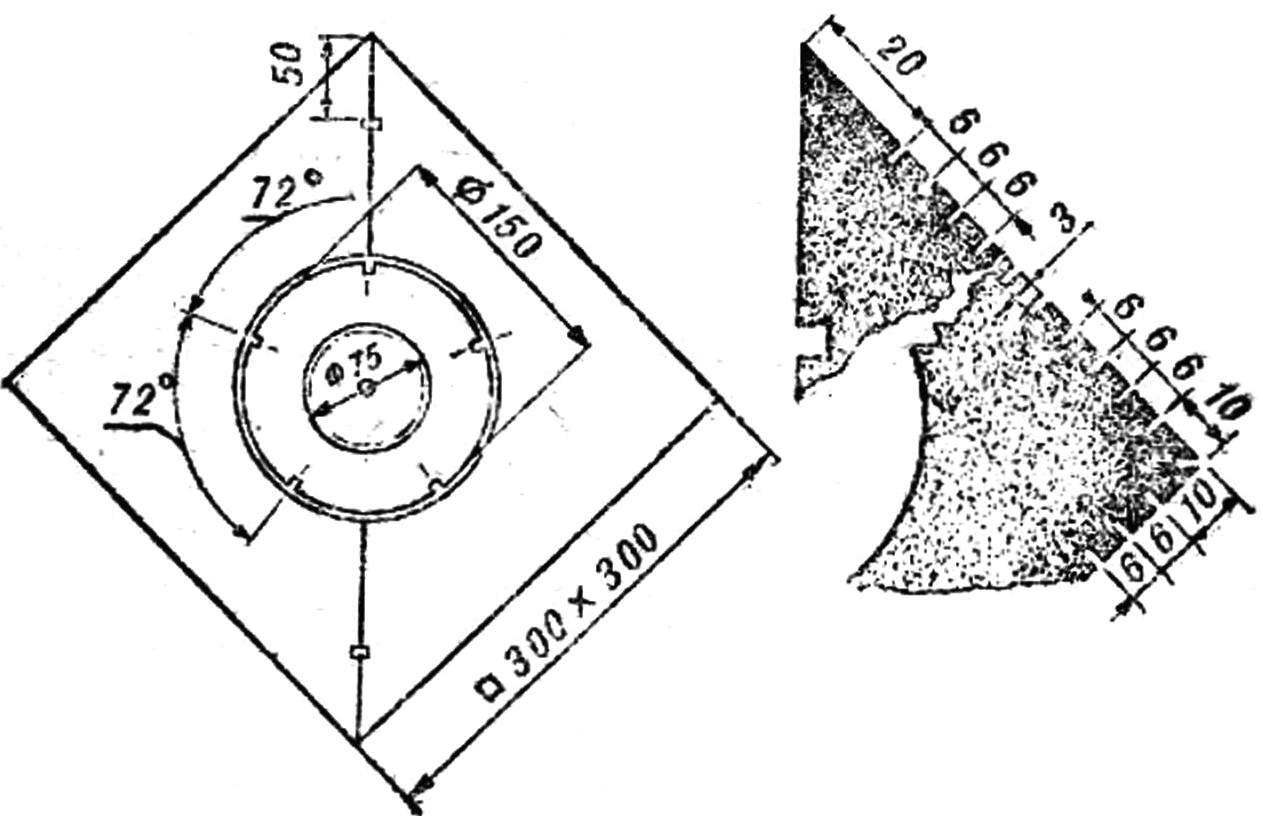 Fig. 2. Markup of square billet. To the right is the location of the slotted nylon fishing line.

Fig. 3. A kit of parts for lamp:
A, B and C — square billet with a Central hole; D and e drives, E — disk with hole.
After you cut round holes in square plates you have three disks. Two of them will go to the cause. One must penetrate the circle and the other to drill a hole under the cartridge mount. Glue the discs in the package, clean and Zapolarye their ends and cut the grooves to connect them to the triangular plates.
Now carefully disconnect the wheels and rinse off the rubber cement with gasoline. The Assembly of the lamp is performed using dichloroethane. Remember that the use of this solvent is necessary in the open air, under the hood, or at least at the open window. If you can not find dichloroethane, it can be replaced with vinegar, dissolved in it a little shavings of Plexiglas.
After bonding parts bandage the lamp with a rubber band and leave to dry solvent. Socket-the lamp socket glue from Plexiglas scraps remaining after manufacturing the basic triangular plates.
Now it is the turn to use fishing line. Tie at the end of the knot and secure it to the extreme of the slot of one of the triangles. Fishing line is stretched as shown in the figure. After completion of this operation the free end of the fishing line associated with the “tail” left on the opposite end of the nylon thread, and zaparivat the flame of a match.
Install the lamp cartridge with a wire, turn the lamp and put the lampshade in its intended place. Just remember that the lamp power should be no more than 60 watts, or the plexiglass can warp.
TABLE LAMP
Depending on the power of bulbs and colors of plexiglass this lamp with equal success can be used as night lamp and as table lamp. In the latter case, it. of course, the best thing to do from a glass of milky color.
Manufacturer of lamp starts with the layout of the rectangular sides of the canopy. After cutting the ends of the long sides of the plates abrade at an angle of 45°. all the plates stacked PA Desk external surface and outward for ease of Assembly glued with adhesive tape. Then they turned, bevels promazyvaetsya solvent, and the plates formed a kind of box. Without waiting for drying of the solvent, pull her rubber band, ensuring the mutual perpendicularity of the faces of the workpiece. After a few hours, remove the rubber band, grind the sharp edges with fine sandpaper and Zapolarye them. 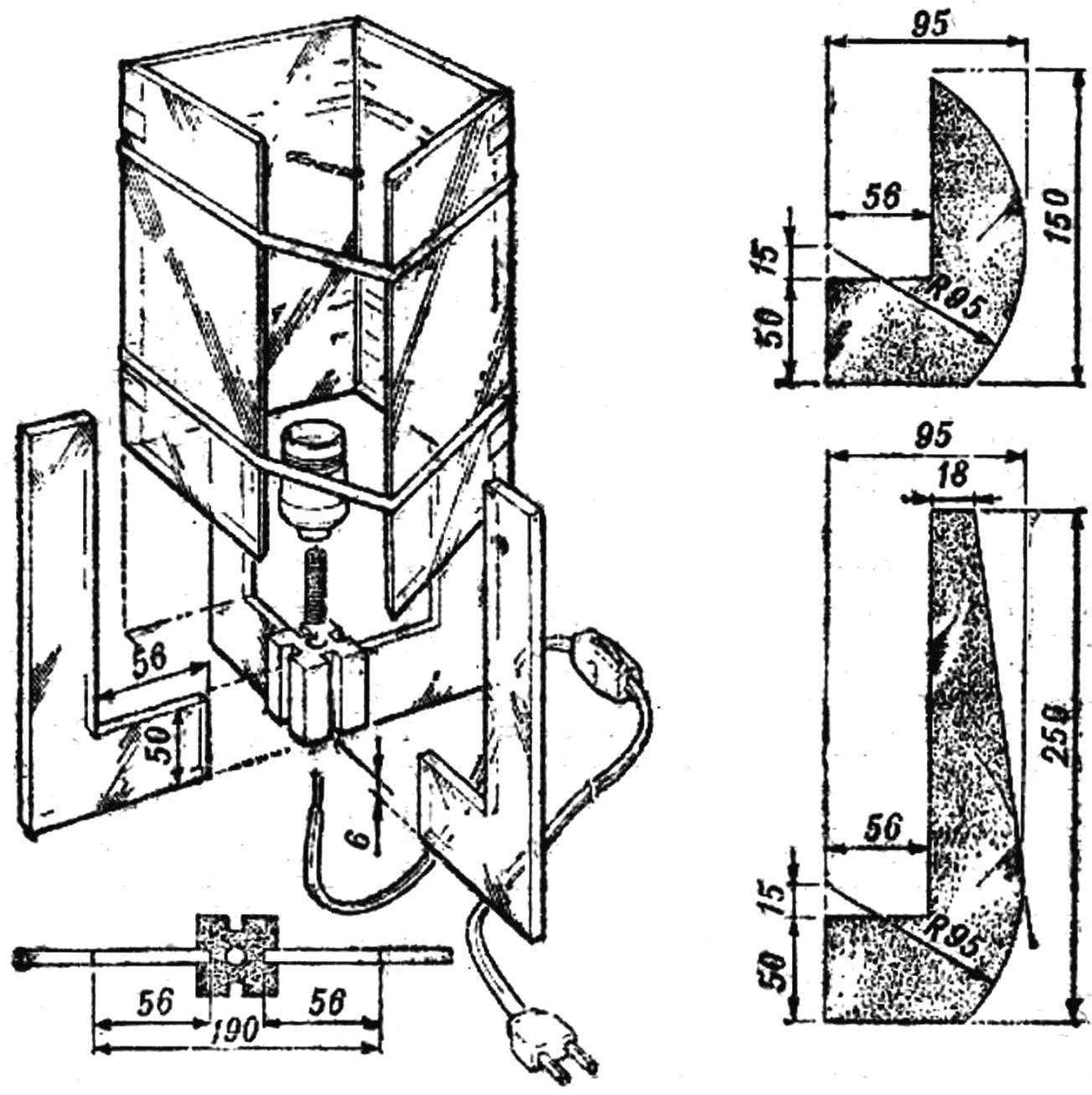 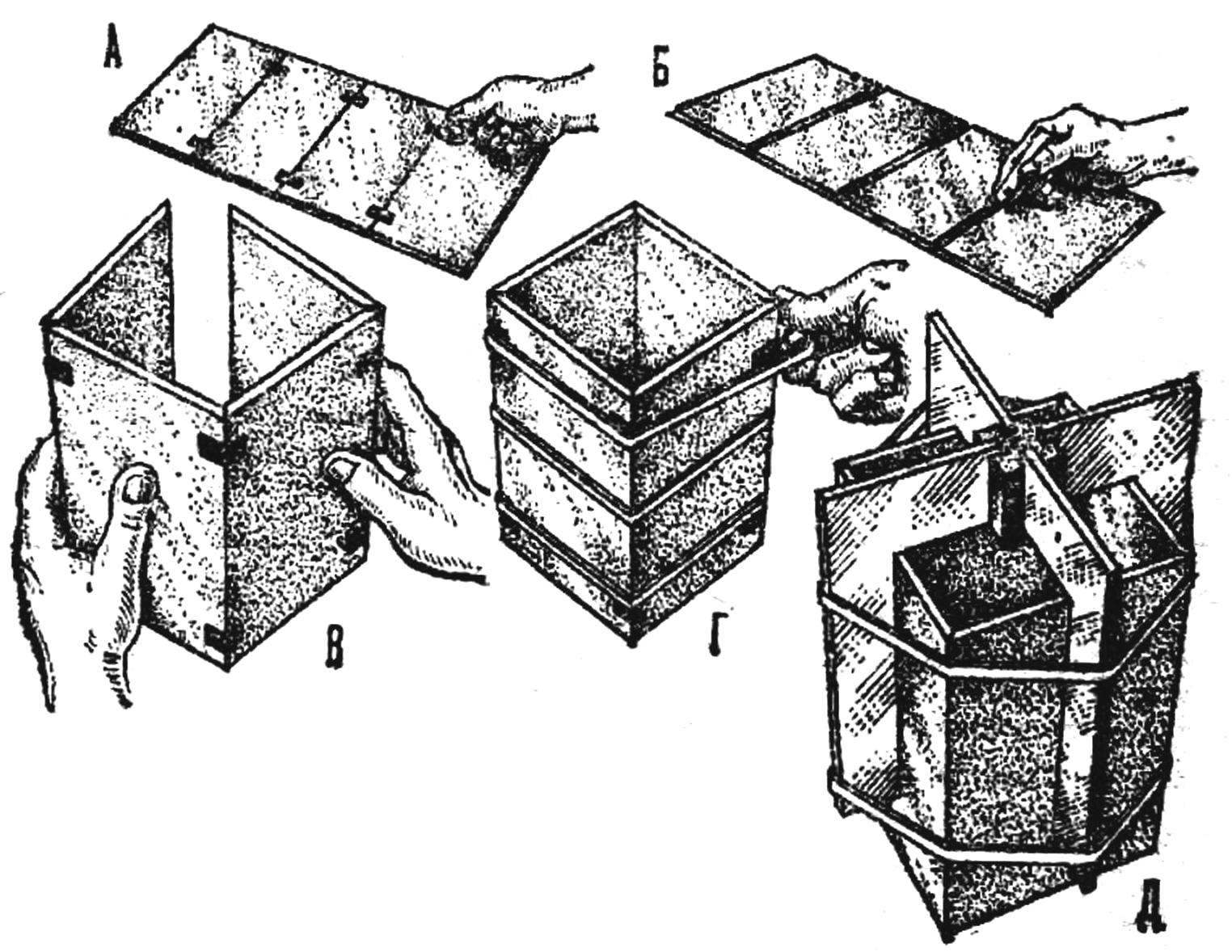 Fig. 5. The sequence of Assembly of a table lamp:
And gluing of the sidewalls of the ceiling with adhesive tape, B — coating the beveled edges of the side walls glue or races” of solvent In the bonding of the light, Mr. the contraction of the sidewalls with a rubber band, D. installation of the stand.
The Central node of the lamp is cut out of wood — preferably oak or beech. Don’t forget that the width of the grooves should correspond to the thickness of the plexiglass.
Stand light can be any. In our drawings depicts three supports, it is possible that you will come up with more suited to your taste.
Cartridge with a threaded sleeve installed in the hole of the Central node. When you glue the parts of the stand to the Central site, don’t forget to shift it relative to the plane of the table 6 to 8 mm for the passage of the cord. For this lamp it is best to use a pass switch. After final Assembly of a table lamp attach with a few drops of glue every detail of the stand.