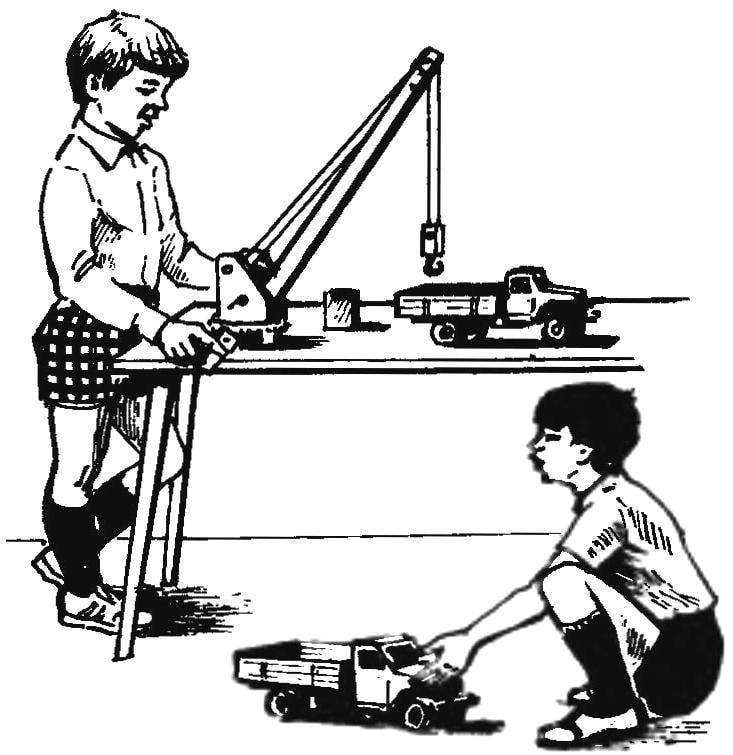 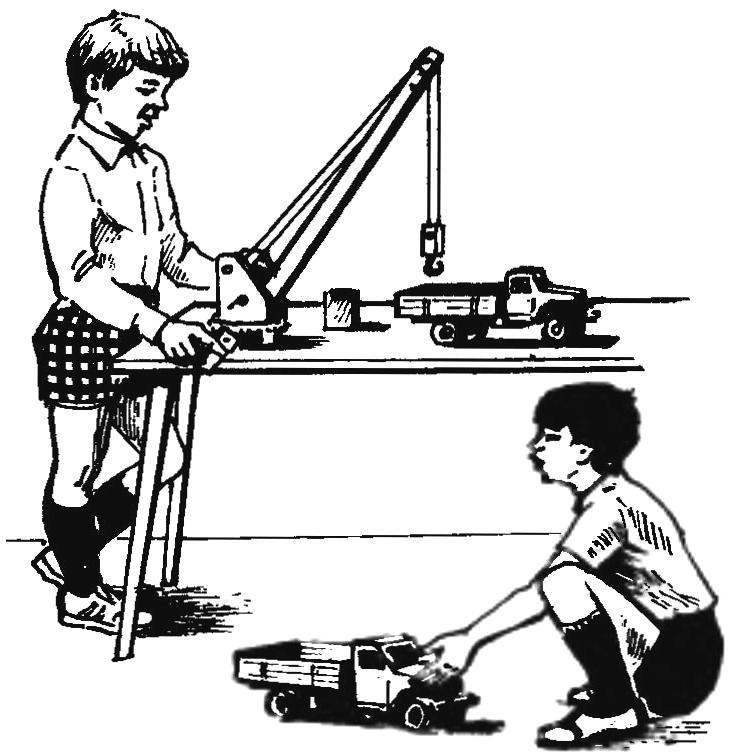 In the old humorous song about children’s aptitudes and interests it was argued that if girls are made of bows, wrappers and ropes, boys, from screws, bolts and gelecek.
In fact, any toddler from all the toys first and foremost will choose any machine, especially if it can not just carry on the floor, but also to perform any operations. It is to such a dynamic and is therefore particularly interesting to apply the proposed toys German magazine “Praktik” mini-crane.
Securing it on the table, the child can imagine himself to be fitter or Builder and make a toy version handling and a required manipulation. You can raise and lower the crane arm, to hang on a hook any load to perform turns for his transfer and discharge. It is also important that such a device allows the child to play alone, and with friends, which is very valuable in terms of education.
And while the toy itself is so simple that can be completed independently by the Pope together with the child, why the interest in the toy even more will not soon fade away. Besides, you will not need to purchase any parts or materials can produce everything that is at hand.
The base mini crane
The base toys — two wooden discs with a diameter of about 120 mm of Board thickness of about 20 mm. One of them, bottom — bearing, is used for attaching the mini fan with a clamp on the edge of the table, and the second rotating platform on a common support with the vertical axis.
The platter has a side opening to enter in a terminal clamp, as well as another, which is glued axle handles the turntables with the needle gear. The latter is a small wooden disk glued on the circumference of the short round spikes. Return them the spikes are glued in holes around the circumference of the turntable, which also make it a kind of gear. During the rotation of the turntables both gears come into engagement, a rotating platform with a crane. 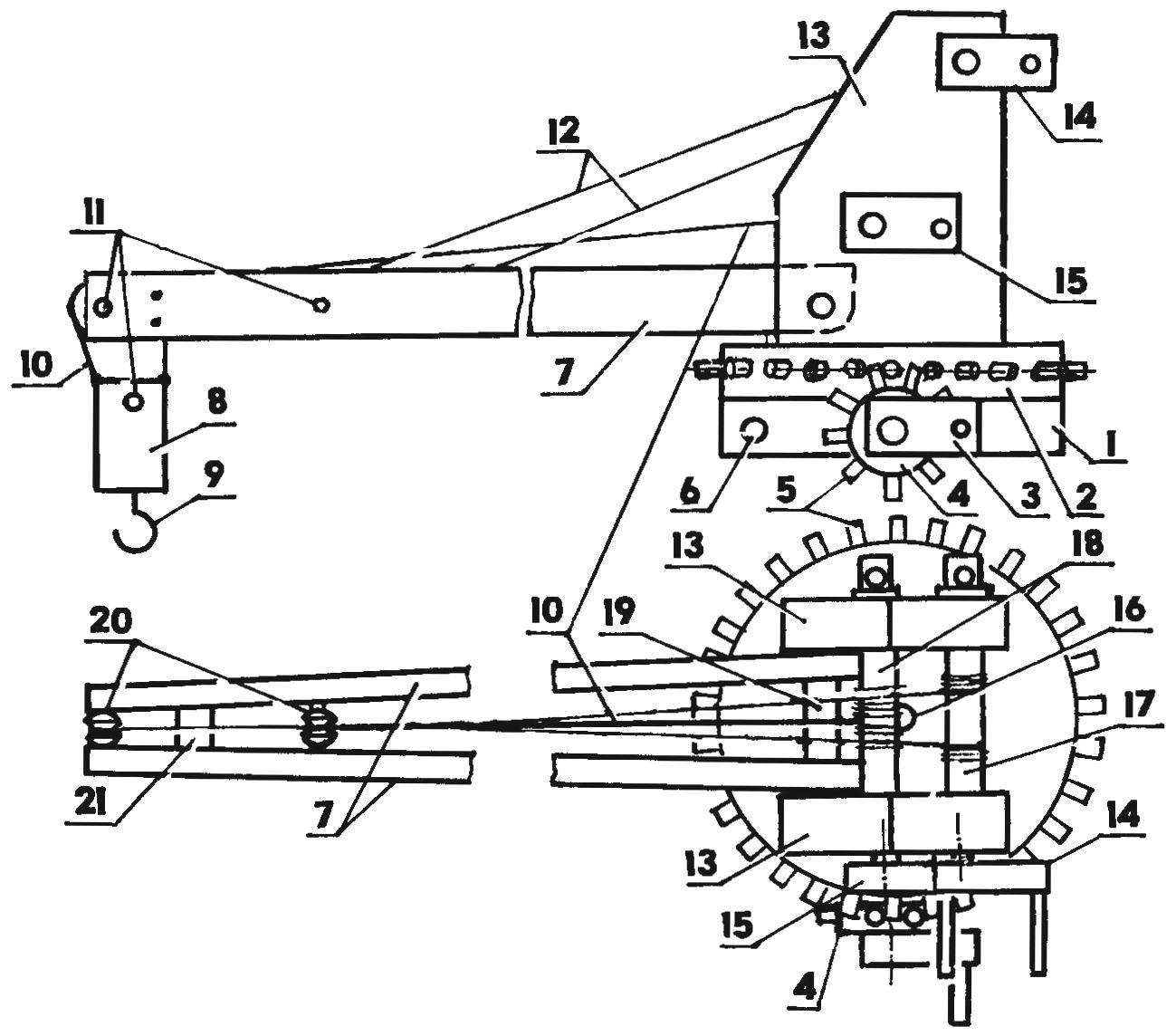 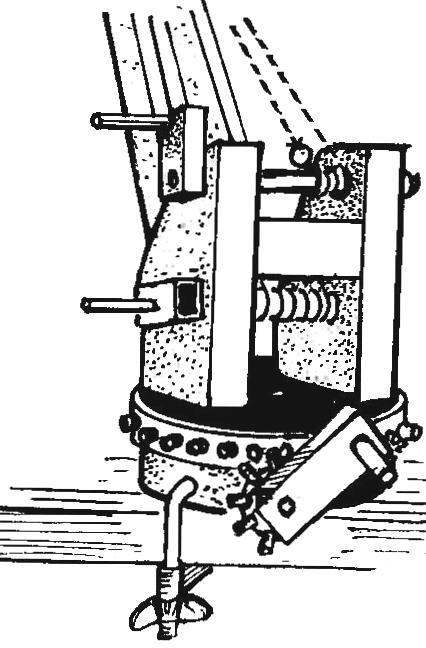 The node of rotation of the crane and lifting unit

The upper part of the boom and the load hook block
The unit of the lifting mechanism On the platform are installed (on the screws with glue or plug-in round thorns) two vertical cheeks (from the Board), in which through holes are three round horizontal rod: the lower axle cargo boom; the other two, with external fans under the cables of the lifting boom and the load hook.
Boom cables Boom system is converging to the apex two thin wooden strips (for example, 3-or 5-mm plywood), the lower ends mounted on the axle and fastened together at the top (when assembled) on the block of the spacer on either side of which are mounted two pulleys (for example, from a sewing bobbin). On the top of them comes the rope load hook, one end of which is secured to the spacer arrows, and the second wound on the lower shaft between the cheeks of the crane base. The second pulley is removed the cable boom. He also has one end wound on the shaft, and the other is fixed close to the cheek attached to ringlet or just not screwed to the end of the screw.
Rotating the turntable at one or another of the shaft, you can raise or lower a boom to manipulate the load, accompanying adopted for these operations commands: “Vira!” (up!) or “lane!” (omit).
Unit cargo hook, It has the shape of an inverted letter P; in on the axis of the nail includes a pulley (same sewing bobbin), and bottom — the hook, which can also be arching of the nail.
U-shaped shape it is easy to obtain, drank accordingly a wooden boss. However, it is easier to take a smaller cut and nail on the two sides plywood cheek. To control the hook block will be easier if it gets heavier.