Today, perhaps, it is difficult to find a more affordable material suitable for the manufacture of flying model than the foam. It is different, but is most common packing or “ball”. This is a very lightweight but durable is not one of them. Possible methods of strengthening the foam parts — treatment of the surface with white glue or okleina tissue paper. The first option is applied on the proposed model Panera, which is in all respects meet the technical requirements of the Moscow regional competition in a simple model aircraft (sailplanes: wingspan 300 mm, weight up to 20 g). Of course, in other regions can be taken and other restrictions, which in principle have little impact on the overall scheme of the model when using it in competitions on the range.
Just wanted to note that on the basis of this development easily designed and the simplest rezinomotornaya. They differ only in the presence of the-rotor, and slightly different balancing. The glider of this type passes when throwing from the hands of about 25 m. the Best result, shown in competition, at 28.5 m. a Similar winged technique is quite capable for the manufacture of pre-prepared “convenience foods” the boys even seven or eight years, having passed the initial course of six to eight sessions in aeromodelling circle. The construction of simple devices, in addition to great scope for creativity as well as skills to work with different tools and materials, contributes to the decision of very important question — what and how to take elementary school students who first came to the club. How relevant is this problem, I think, it is clear today to any Antonov an-teacher.
The fuselage of the glider are presented with a pine rail section 4×5,5 mm. If desired, it can be prostrogat from the trailing edge of the wing to the tail cone. The bow — Bob — cut from lime plate thickness of 4 mm. Both parts are glued together.
The tailplane is from plocnik pre-cut plates of packaging foam with a thickness of 3.5 mm. After profiling the stabilizer and fin are coated with a liquid white glue, and then using the same binder mounted them on the fuselage. 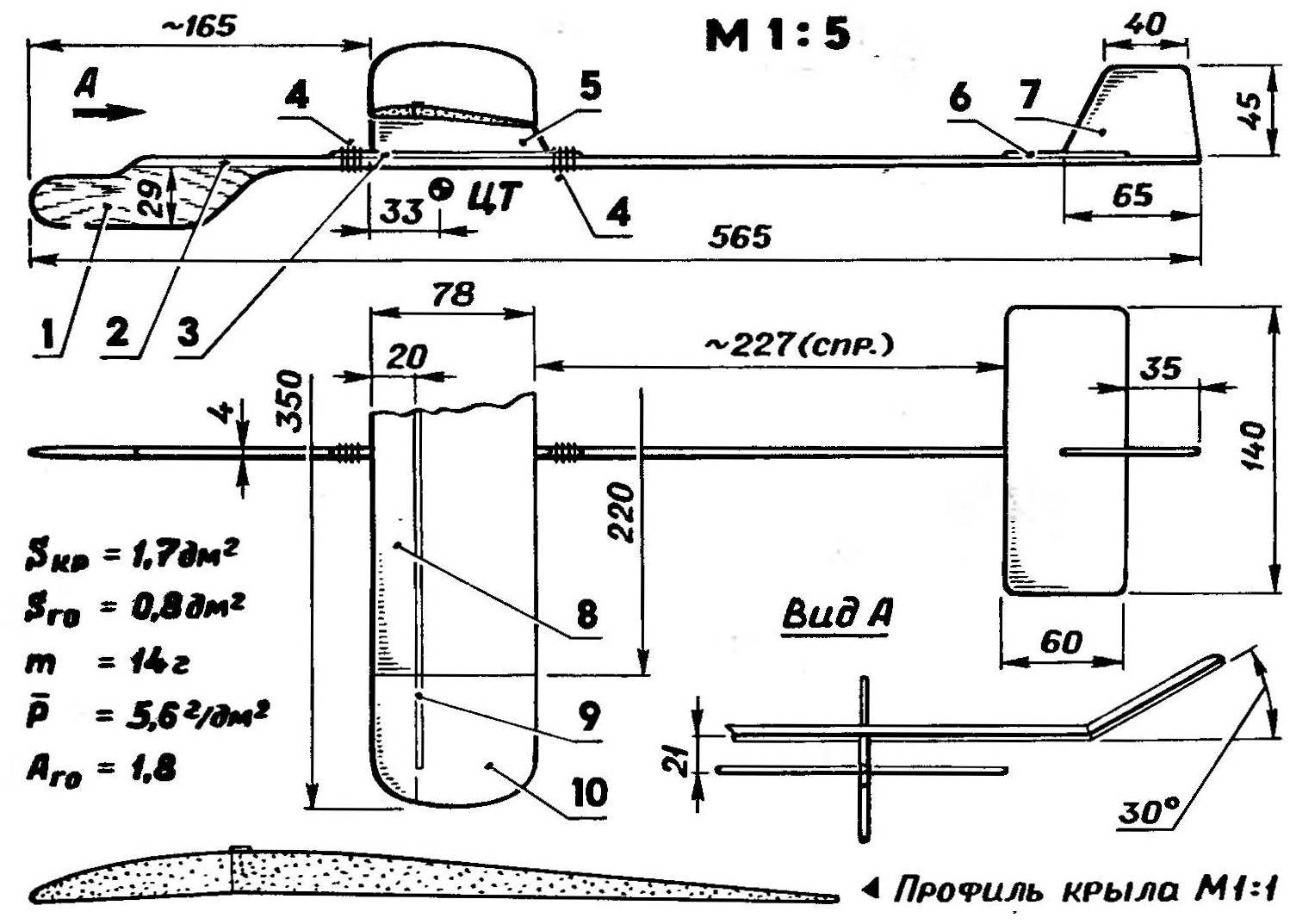 Throwing glider model:
1 — the nose-weight, 2 — rake of the fuselage, 3 — podpylenny strap, 4 — rubber thread, 5 — pole, 6 — stabilizer, 7 — Kiel, 8 — front wing, 9 — spar, 10 — the rear part of the wing.
Wing, having a straight center section and “ears”, made from a pair of foam blanks-plates with width of 20 and 58 mm, thickness 4 mm. the Narrow plate go on the front part of cripa (the edges are profiled in accordance with a pattern), and wide — on the back (using “securilock” — bars are glued with emery paper — handle on the wedge to the trailing edge of the profile). Paired parts PVA glue with a little “kink”, which gives the desired curvature profile. After drying, separate the center section and “ears” when necessary, cleaned and then coated with liquid PVA glue. Top joint plates glued pine rail-the spar section 1 x2 mm. This operation can be carried out before painting the wing, with the depth of the spar flush with the contour of the profile.
joined with the center section at an angle of 30 with the joints additionally, a thick coat of PVA. The bottom in the middle of the center section on glue to put the foam pylon 6 mm (profiled). Underneath is glued plank pine rail section of 2×4 mm.
Assembly of the wing and fuselage is using a rubber thread. This technique facilitates the process of adjustment of the model and increases its vitality. Note that the good flying qualities of the glider are provided in excess of the front edge of the wing above the rear about 2 mm, which is set when you cut the pylon and also at the location of the center of gravity 33 mm behind the front edge.
V. ROZHKOV