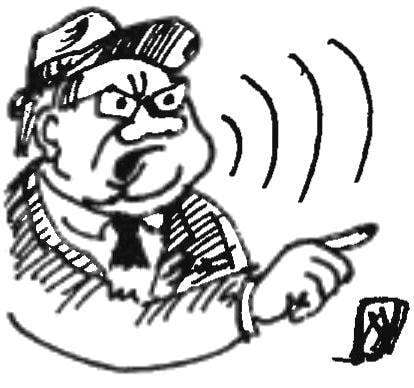 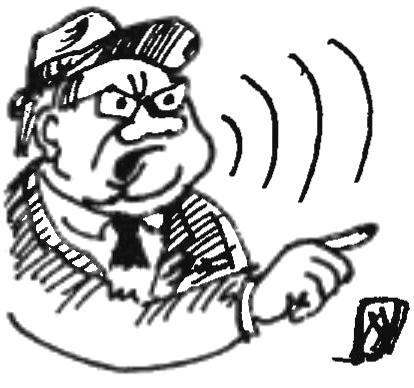 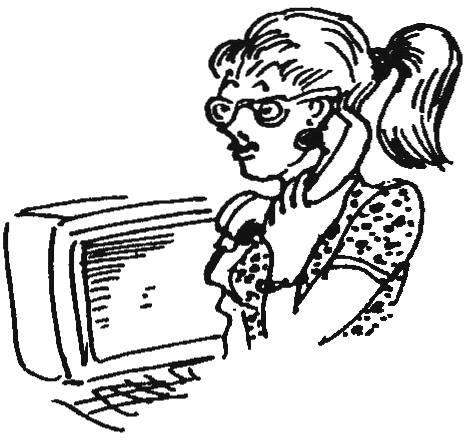 To call to his subordinate, the modern Manager doesn’t need to pick up the phone, and even more — to get out of his office. Just press the speakerphone button intercom “Director — Secretary”, say a brief “invite to me…”, and no, that is, problems.
As one of the developers of such equipment strongly recommend you to use the device, schematic of which is given below. First, it allows you to control and receive-message transmission in two non-shielded wires (you can use a normal telephone “noodles”) in contrast to many analogues, certainly require the laying of special lines. Secondly, thanks to the integrated transistorradio the one-shot this device allows after connecting the Director to automatically switch to the program. Finally, in the third: to build here does not require any expensive imported electronic components or experienced professionals.
The apparatus comprises a base unit and a remote (the Director’s) control. The first one has the amplifier, assembled on transistors VT4 — VT6 and analog chip DA1, subunit control (semiconductor triodes VT1 — VT2 and relay K1), a single-shot VT3, relay K4, dynamic head at BA2 and switching relays K2, K3.
In the initial state, the transistors VT1 — VT2 is opened, through the relay coil K1 current flows, the contacts K1.1 open. To transfer administrative “invite to me…” or other message from the remote Director press the button SB1. Via the communication channel, the base of transistor VT1 is closed to ground through the button and the resistor R1 in the remote. Semiconductor triode VT1 — VT2 are closed, the relay K1 “releases” its built-in reed switch. Hence, the contacts K1.1 are closed, dynamic head (speaker) BA1 is connected to the amplifier and turns in the Director’s microphone. 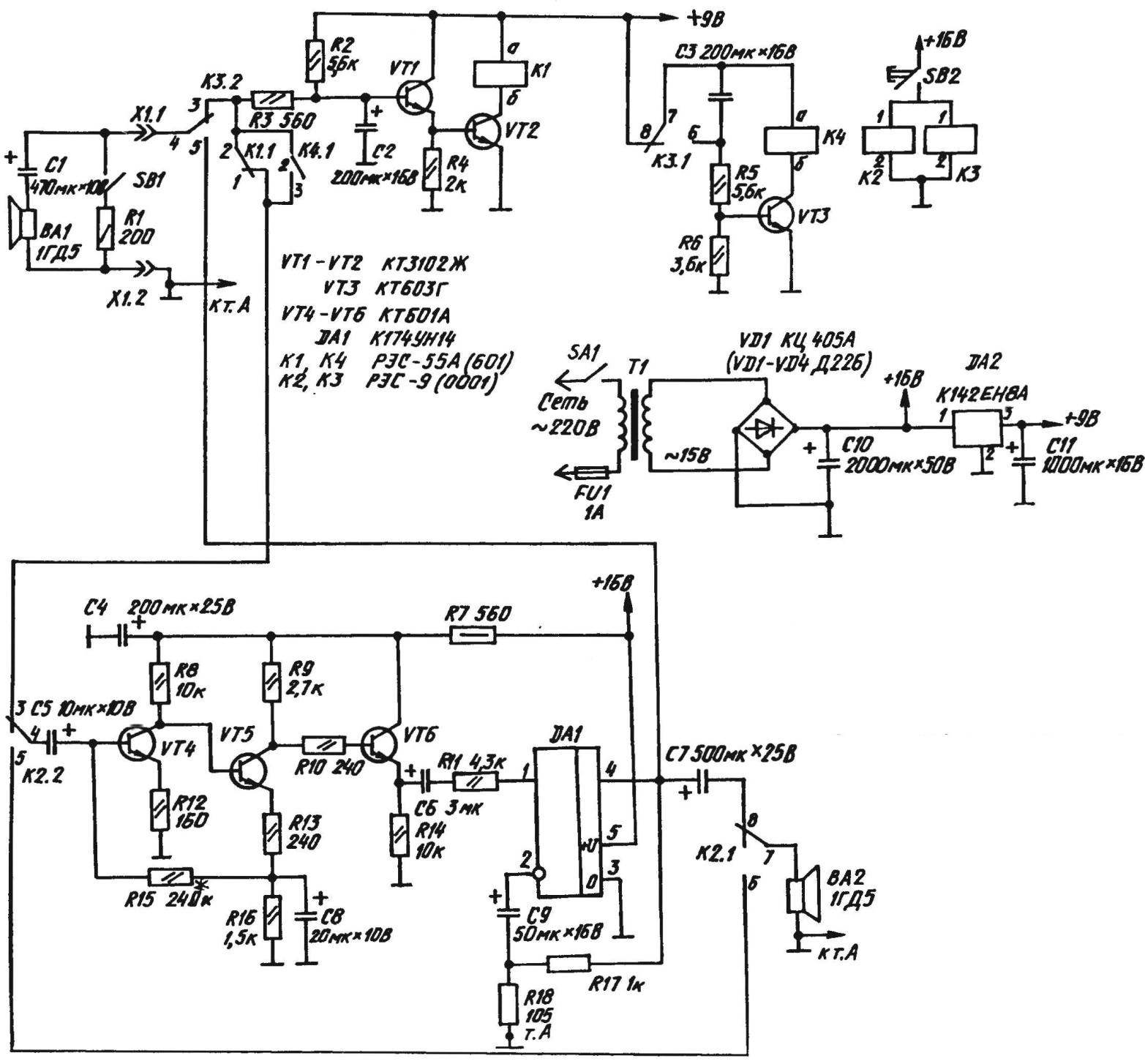 Circuit diagram homemade speakerphone intercom “Director — Secretary”
To answer a call or message is received from the Director, the Secretary presses the button SB2. Trigger relay K2 and KZ. At the Director’s panel with relay contacts KZ.2 is connected to the output of the amplifier, and the speaker becomes a kind of BA2 MIC Secretary — via the contact K2.1 and K2.2. Simultaneously, the contacts K3.1 completing the capacity C3 and discharged her, if she was charged.
At the end of the message transmission solenoid K2 and KZ let go their anchors. The relay contacts K3.1 the power supplied to relay K4 and capacitor C2. Relay K4 is actuated and closes the circuit of the Director’s console with amplifier (contacts K4.1 connected in parallel with the contacts K1 is broken.1). Thus the transmission from the remote without pressing the button SB1.
At the end-time one-shot (2-2,5) all the switching elements of the device come to its original state. 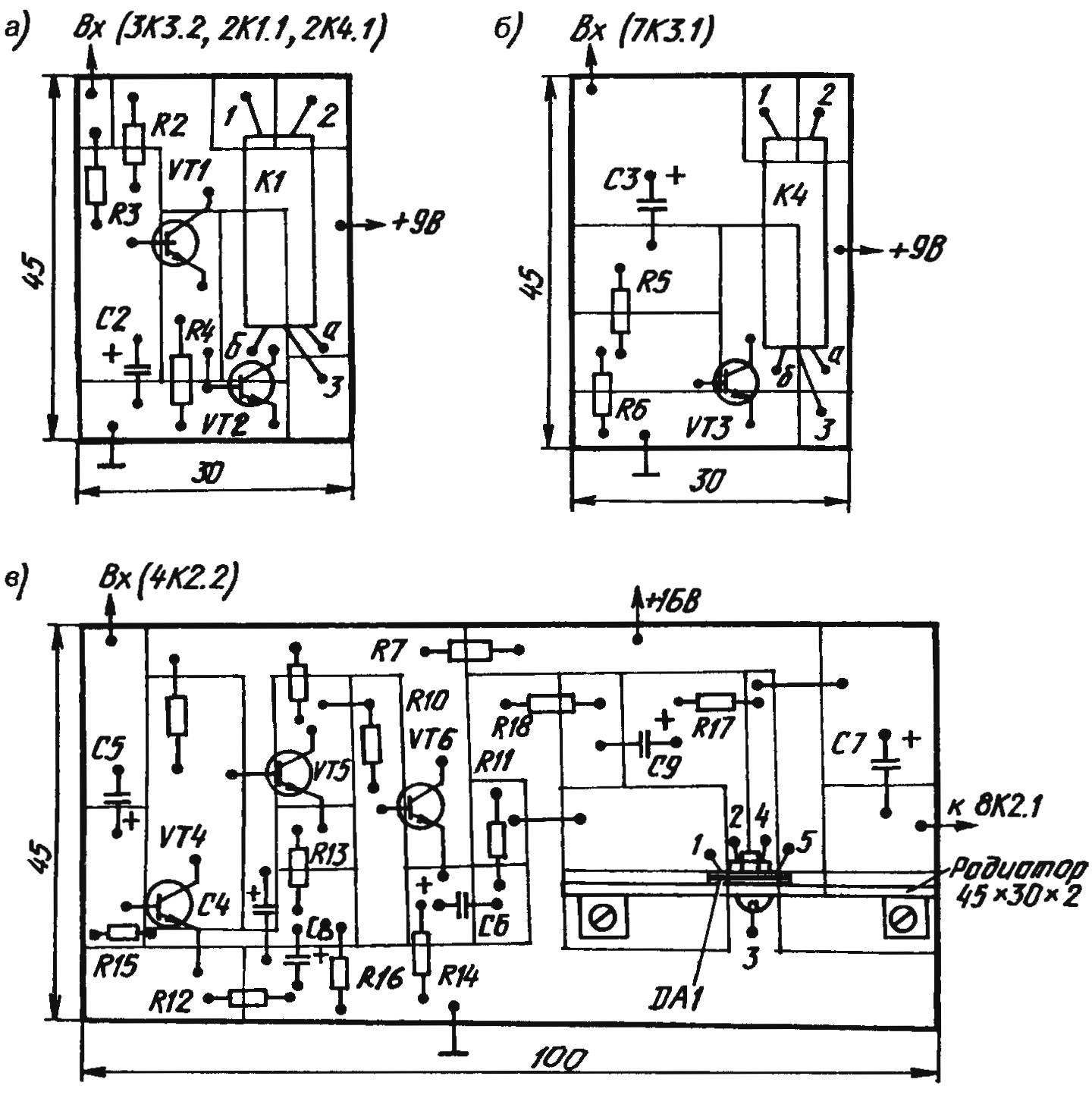 Topology pseudopath boards subunit (a), the one-shot (b), and amplifier base unit (in)
Structurally, the base (secretarial) unit and remote (the Director’s) control located in the buildings of the subscriber loudspeakers. Power supply external power 2-3 watts. The chip DA1 should be installed on the exposed radiator area of 4-5 cm2.
Amp setting no complications is not, however, to eliminate possible self-excitation of all the conductors going to ground, must be soldered to the same point on the amplifier Board (t·A), with the exception of the conductors going to the relay coil. Installation to produce unshielded wire, for example, MGTF-0,12. Pseudoacacia device Board is split, one-sided foil, plastic, thickness 1-1. 5 mm.
A. PARTIN, Ekaterinburg