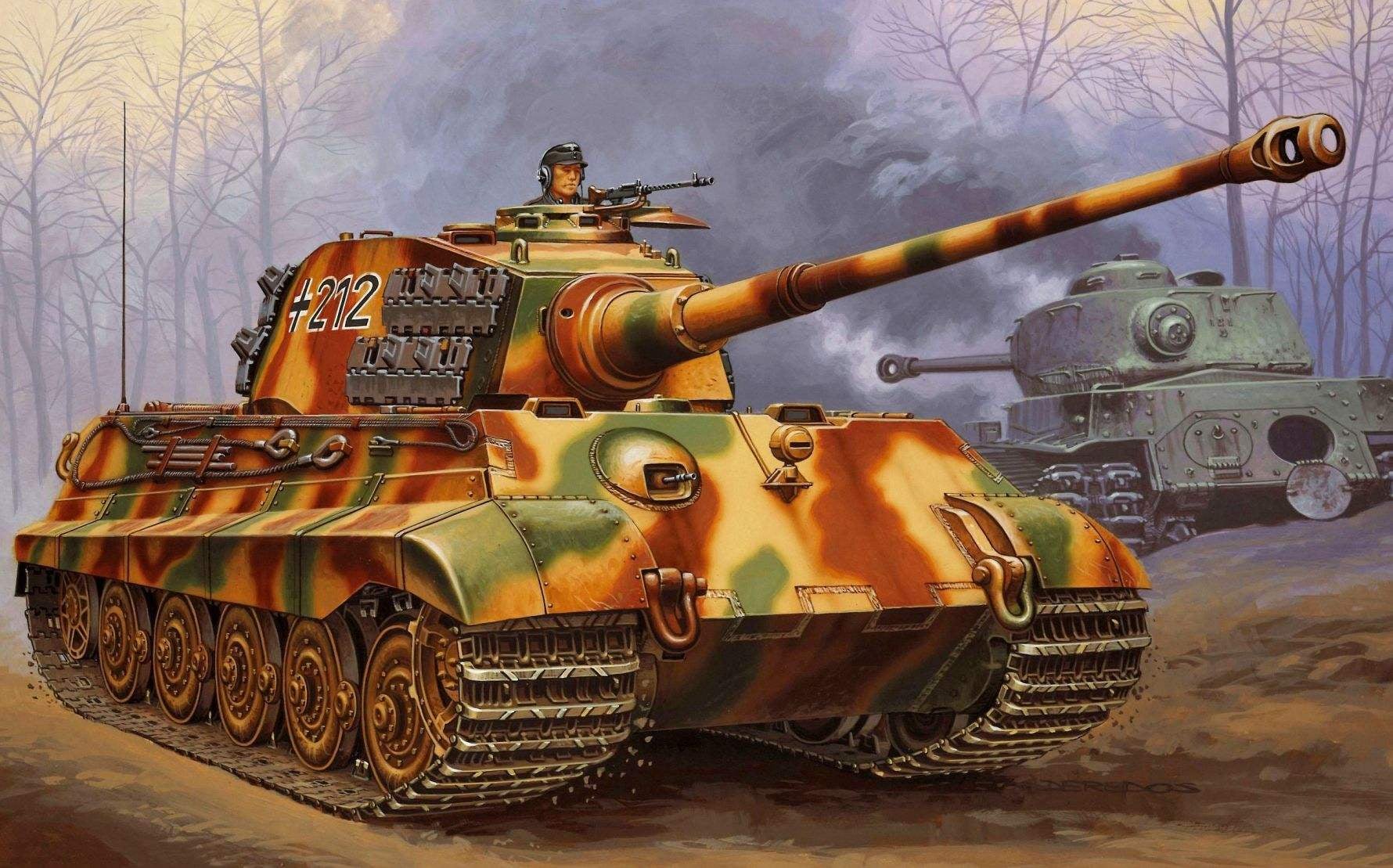 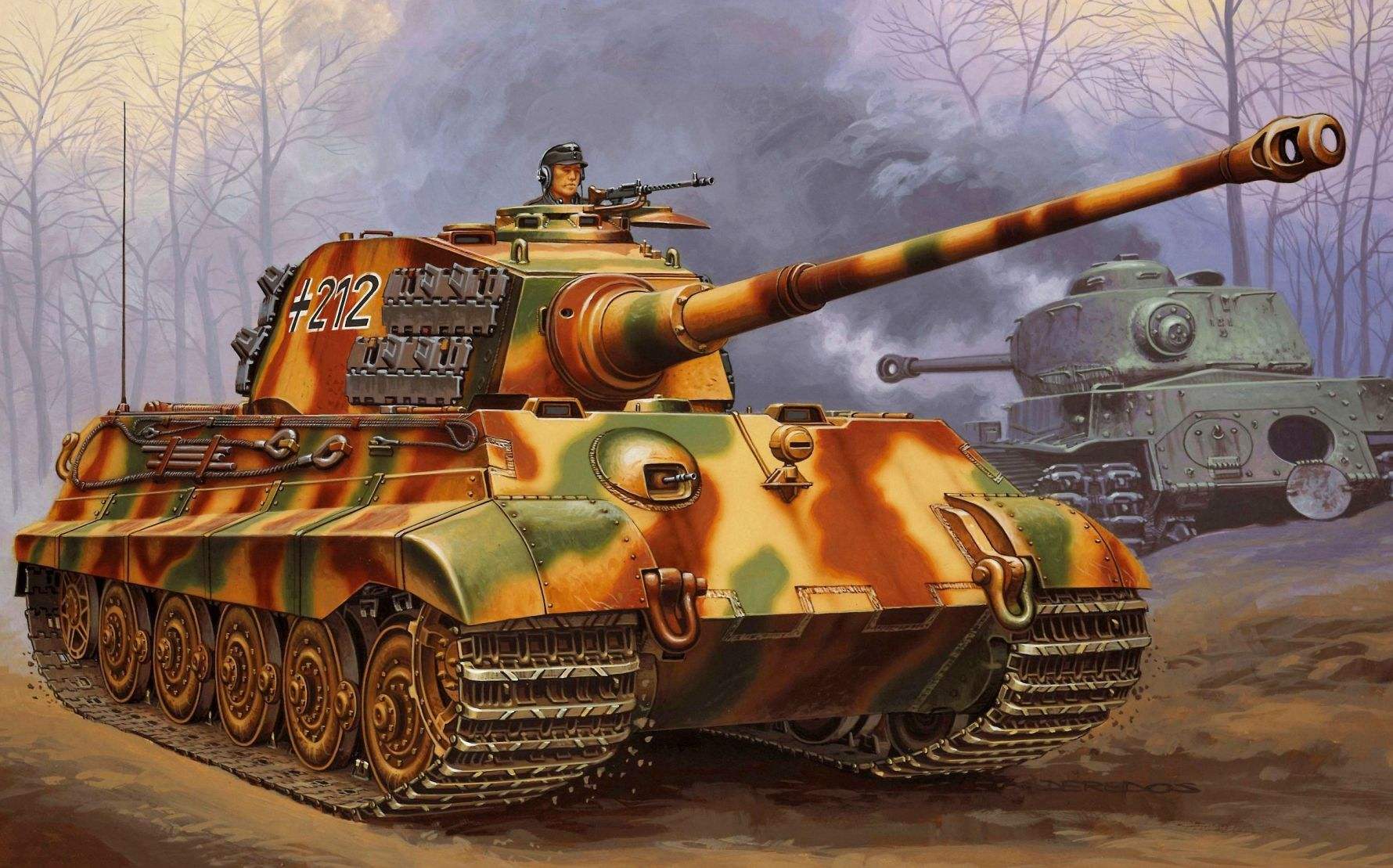 In August 1942, the armaments Department of the land forces of the Wehrmacht developed tactical and technical requirements for a heavy tank designed in the future to replace the recently released “Fever” — Pz.VI Ausf.E (see “modelist-Konstruktor” No. 7, 2003). On the new machine was supposed to use the constructed in 1941 by the Krupp 88 mm KwK 43 gun with a barrel length of 71 caliber. In the fall of 1942 to the design of the tank began firm Henschel and the design office of Ferdinand Porsche, once again competing with Erwin Aders.

I must say that there is nothing fundamentally new Dr. Porsche was not offered. His tank VK4502(P) was a somewhat redesigned for the new tech-job tank VK 4501 (P). Borrowed from the last suspension, powerplant of two gasoline engines Simmering-Graz-Pauker power of 200 HP each and an electric drivetrain. We have developed two options for layout of the tank VK 4502(P): with front and rear tower. Rear placement of the turret, the engine was located in the middle of the hull, and the compartment — ahead. The main disadvantages of the project were under-wegenast and low reliability of electric transmission, the high cost and low processability. Chances to win in the competition with the car E. Aders he almost was not, however, in 1943, the plant Friednch Krupp AG in Essen had produced 50 turrets for the tank.
With regard to the project proposed by the firm Henschel, — VK 4503(H), it is significantly more likely to meet the requirements of the military. In particular, and extended in February 1943, the requirement of greatest possible unification with the tank “Panther II”. However, creating a new heavy tank, and Aders have not invented anything original: instead of “eastobrite” housing the old “Tiger” based of the new machine was based on the shape and proportions of the hull and turret of “Panther”. While 150-mm frontal armor on the hull positioned at an angle of 50° to the vertical, and 80-mm Board — 25°. In the chassis used nine double road wheels with internal shock absorption. Part of the chassis parts (particularly wheels) borrowed from “Tiger” and “Panther”. The legacy of the last new car got a 700-HP engine Maybach HL 230Р30 and cooling system with four radiators arranged in pairs left and right of the engine. “Panterovsky” in the power Department posted and fans. “Tiger” is borrowed from the driveshaft, and a gun mask and install exchange machine gun was unified with the “Panther II”.
In mid-January 1943 Hitler was shown the model of the tank VK 4503(H). “Toy” like, and work has started in full swing. In this case, as in the case of the Tiger tank, I have orders to use on a tank Henschel already made construction tower Porsche. As you can see, history repeated itself again.
20 October on the ground of ARIS in East Prussia, the Fuehrer showed a full-size wooden mock-up of the new machine. 18 November 1943 in the Assembly hall with the company Wegmann received the first three fully assembled towers and Assembly of the tanks. Until the end of the year were made three pre-production machines.
The new tank received the designation Panzerkampfwagen VI Ausf.B (Sd.Kfz.182), later replaced by the Panzerkampfwagen Tiger Ausf.B or Tiger II. The informal name Königstiger “king tiger” — the Wehrmacht used quite rarely, but it has become the most popular among opponents in Germany. For example, in our country the name “Royal tiger” is known to everyone, and “Tiger B”, or “Tiger II” in most cases, will cause surprise and confusion.
Serial production began in January 1944. In accordance with the custom Control arms supposed to make a 1237 tanks “Tiger II” with an average build rate of 120 cars per month. However, these plans from the very beginning was not to be. 23 October 1943, that is three days after the show at the site ARIS, 486 British bombers bombed Kassel. The city was destroyed by 80%, and went to the Henschel factories. As a result, by may 1944, the factory shop left only 20 the serial “the Royal tigers”.
Its maximum production was reached in August 1944, but did not reach the planned. Another major blow to the German tank factories allied aircraft struck in the autumn of 1944. The latest issue of the “Royal tigers” has decreased almost three times.
Since March 1945, their production had to connect the plants Niebelungenwerke to Saint Valentine, but, for obvious reasons, this did not happen. In the end, it made a total of 489 combat vehicles of this type. Some sources give a different number — 477 units.
As already mentioned, for the first 50 tanks were set construction tower Porsche. The first battles involving new machines revealed that she has some shortcomings. For example, the tendency of the shells to ricochet down when hit in the lower part of the mask, which threatened to hole in the relatively thin roof of the hull.
By may 1944, Krupp designed a new tower, which were installed in the tanks starting with the 51st machine. This tower had a direct 180-mm frontal plate, excluding a possibility of a rebound. The greater the amount booked the new tower has allowed to increase the ammunition from 77 to 84 shots.
In addition to the replacement tower, which has become the largest modernization in the design of the tank in the process of mass production made other smaller changes. Has been improved the design of the gun is enhanced with the booking of the engine compartment, installed a new sight. At the end of November 1944 on the “Royal tigers”, a new caterpillar, and in March 1945, introduced the natural pressure of the purging gun barrel. It was carried out by air special cylinder, where it is injected with the energy of recoil of guns. By this time machine guns MG34 was replaced by the MG42, and the installation of ball exchange machine gun for the installation of a machine gun MR40.
As you approach the end of the war in the design of the tank were made more simplifications. On the machines the latest releases of, for example, lacked even internal colour. For all serial production there were repeated but unsuccessful attempts to improve the side gears and the engine of the tank. 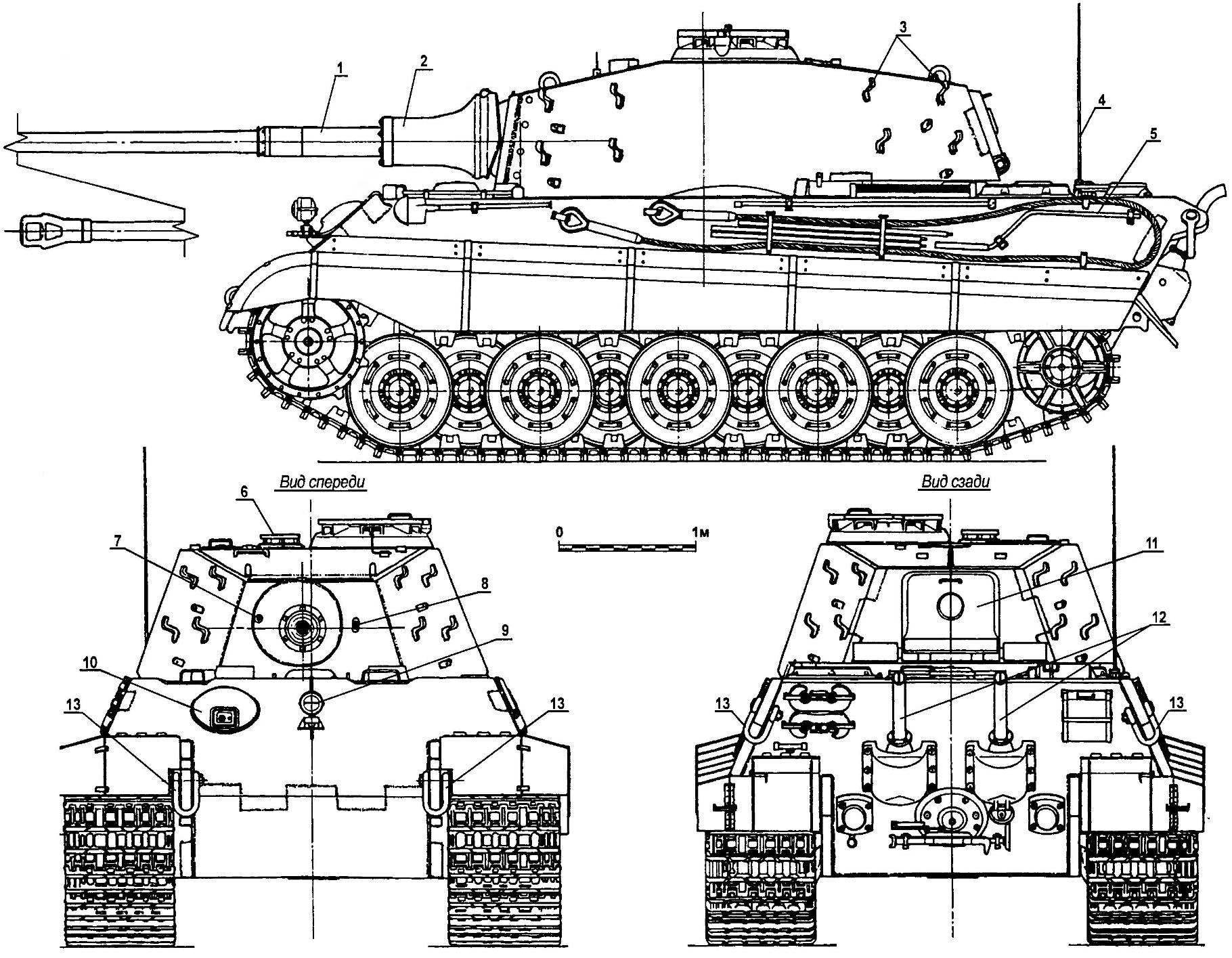 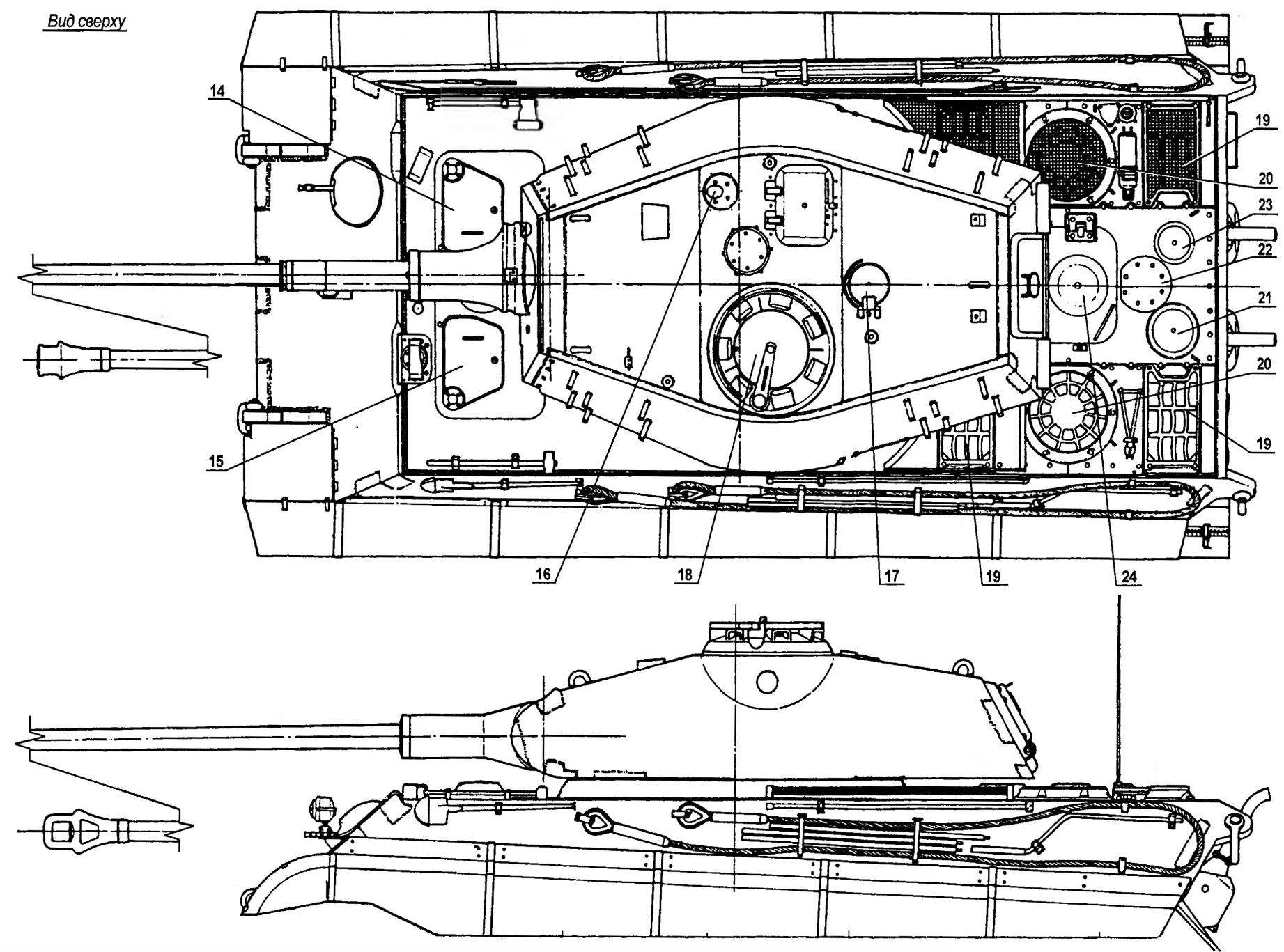 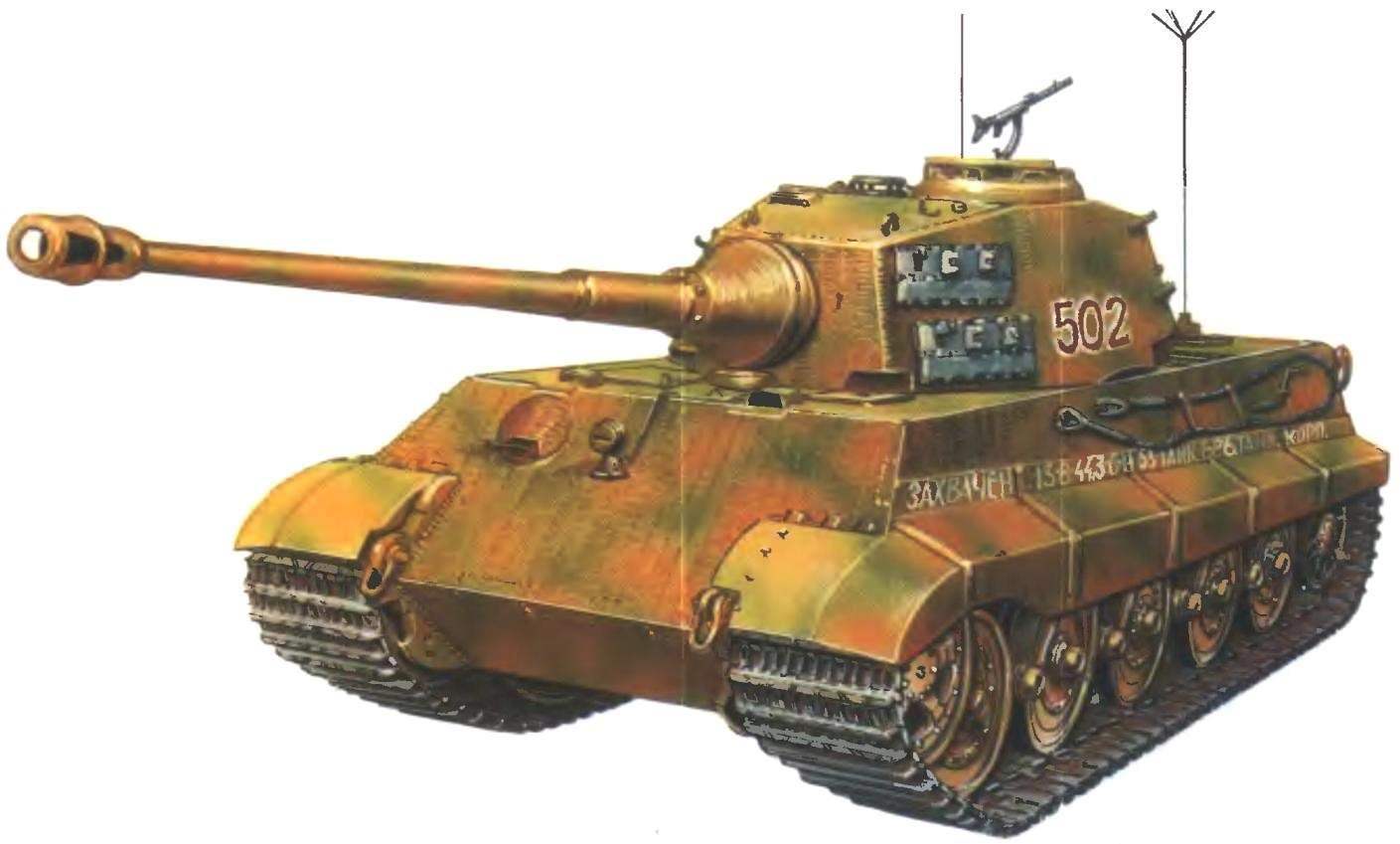