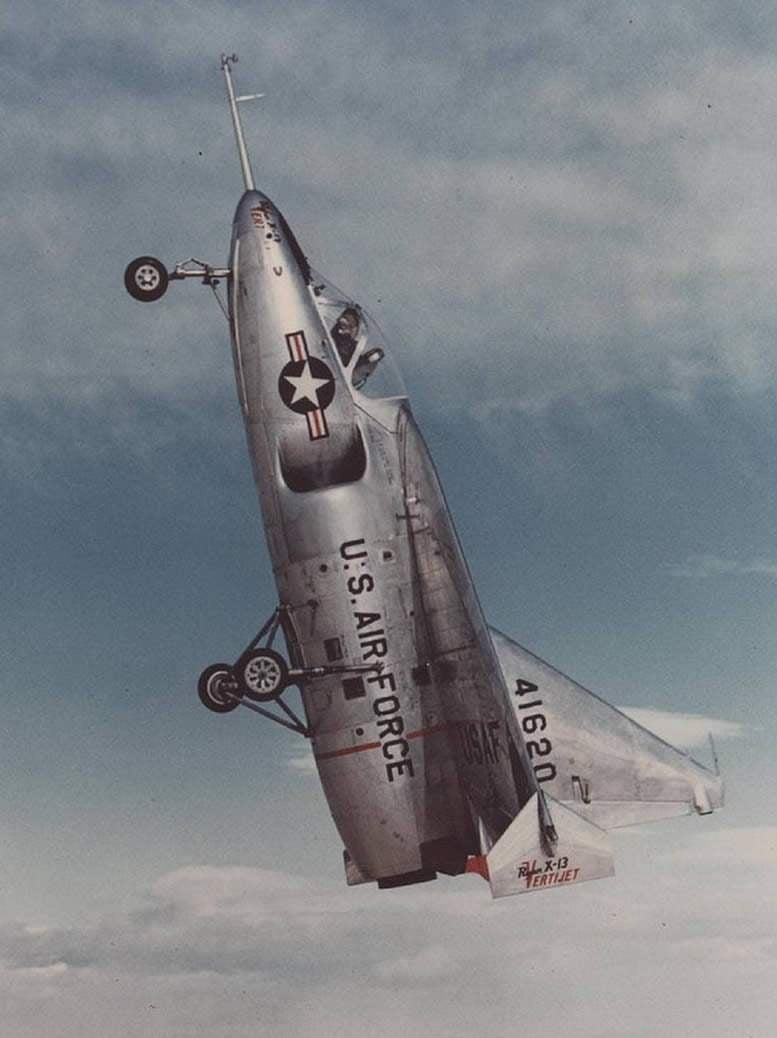 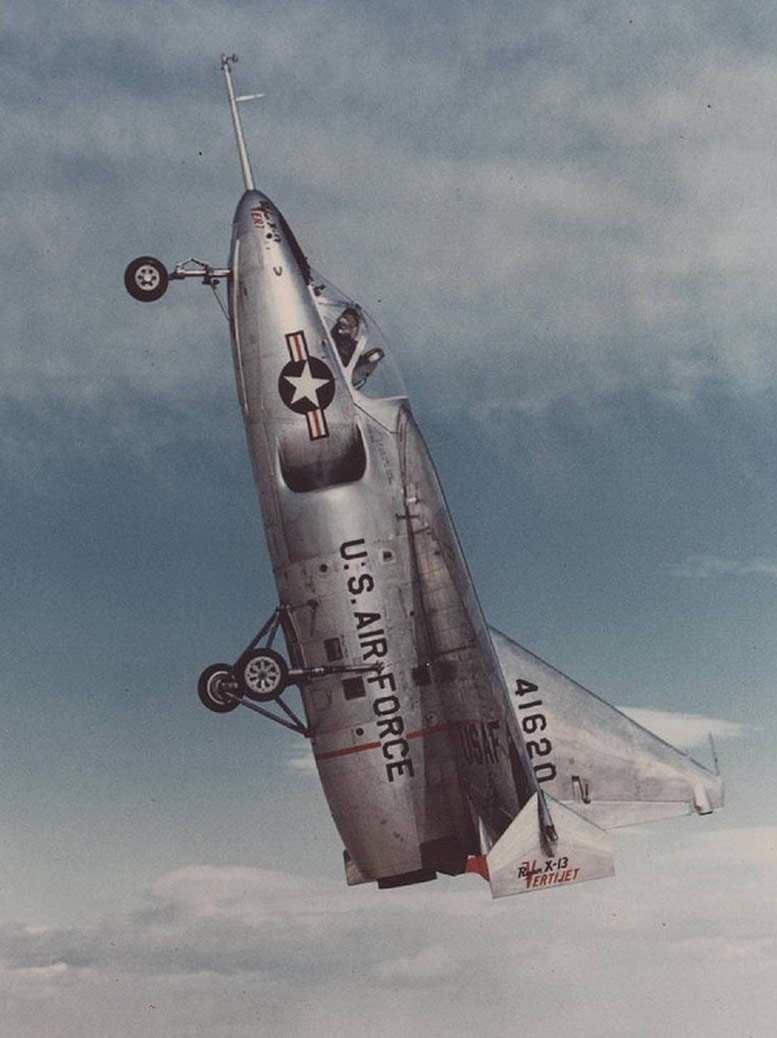 Vertical take-off fighter RYAN X-13 VERTIJET. In our day, aviation experts, it is difficult to surprise aircraft with variable thrust vectoring, or with gas rudders and the vertical take-off planes. But few people know that all these solutions were first implemented on a small experimental plane X-13 VERTUET established aviation firm Ryan in the early 50-ies of the last century.

The name of Claude Ryan, owner of Ryan Aeronautical company, has acquired international fame in 1927 by the aircraft NYP “Spirit of St. Louis” which Charles Lindbergh flew the Atlantic ocean. Another famous aircraft, his company became a carrier-based fighter with a combined power plant FR-1 FIREBALL built in 1944. In the rear the screw of the fighter was installed auxiliary turbojet engine J34-GE-3 with a thrust of 730 kgs, which included a pilot during takeoff or in combat. In November, 1945, serial FR-1 of squadron VF-66 was able to land on an aircraft carrier using only a jet engine.
Combined power plant FR-1 gave him a distinct advantage in speed and climb rate before the piston fighters of the time. Moreover, after reaching a certain amount of fuel from the internal tanks total thrust of the propeller and turbojet engine exceeded the weight of the aircraft. This unique feature lively discussion with the designers of the firm Ryan, which suggested that the FIREBALL is able to vertically hang in the air. Before the flight experiment is not reached, but that arose between the engineers discussion led by Claude Ryan thought about the possibility of creating a jet aircraft with vertical takeoff and landing. A feature of this aircraft was to become the high thrust obtained due to the minimum size and structural weight of the aircraft.
In 1946, Ryan shared the idea of creating such a plane with the head of the Bureau of Aeronautics of the Navy of the United States R. Stevens. Far-sighted state officials are seriously interested in the possibility of creating such a device in a post-war cuts in funding for the fleet when all the resources of postwar America were concentrated on the production of nuclear bombs and their delivery vehicles — giant bombers. The primary role of the Navy as the primary strategic strike force, conquered them in the Pacific ocean, was quickly forgotten, and in the higher echelons of power began to venture opinions on the uselessness of aircraft carriers and the subordination of carrier-based aircraft to the air force.
Trying to mitigate the effects of the upcoming reforms, the sailors began to find innovative ways of development of naval aviation. The aim of conducted research was the fighter able to operate from cargo ships, tankers, destroyers or cruisers.
First seen two different apparatus. The first was a light aircraft shipborne vertical position of the fuselage during takeoff and landing, equipped with turboprop engine is T40. The result of the work in this direction was the aircraft vertical takeoff and landing (VTOL) CONVAIR XFY-1 POGO and LOCKHEED XFV-1 SALMON, with large coaxial screws of opposite rotation. The second ship was a small fighter jet flying boat XFY-2 SEA DART Convair company, shreema and raised by crane to the ship. Later they added the third apparatus — proposed by Claude Ryan jet mini plane with vertical take-off and landing position of the fuselage. Given the small size and weight of the aircraft, the sailors were supposed to put it in submarines. 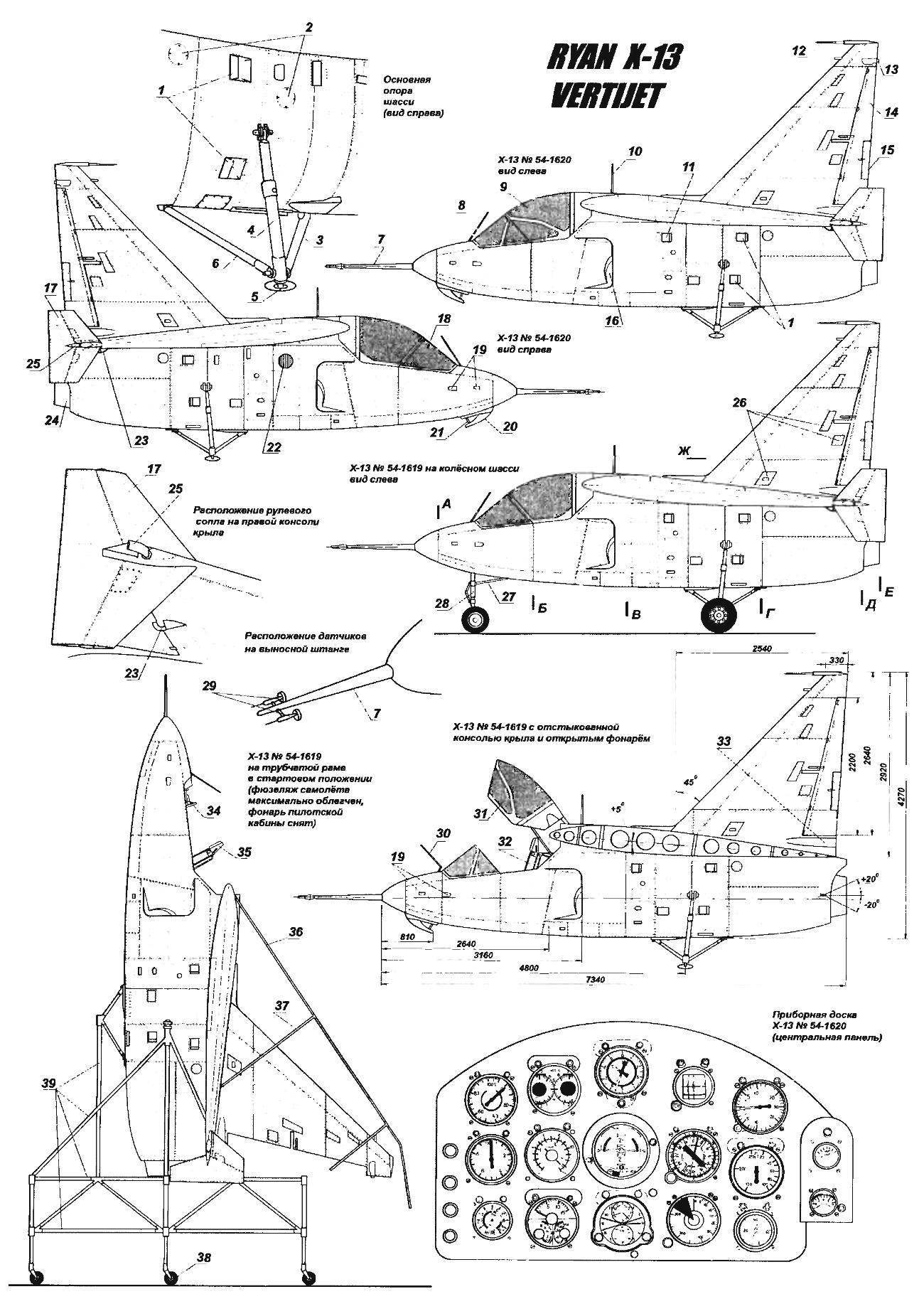 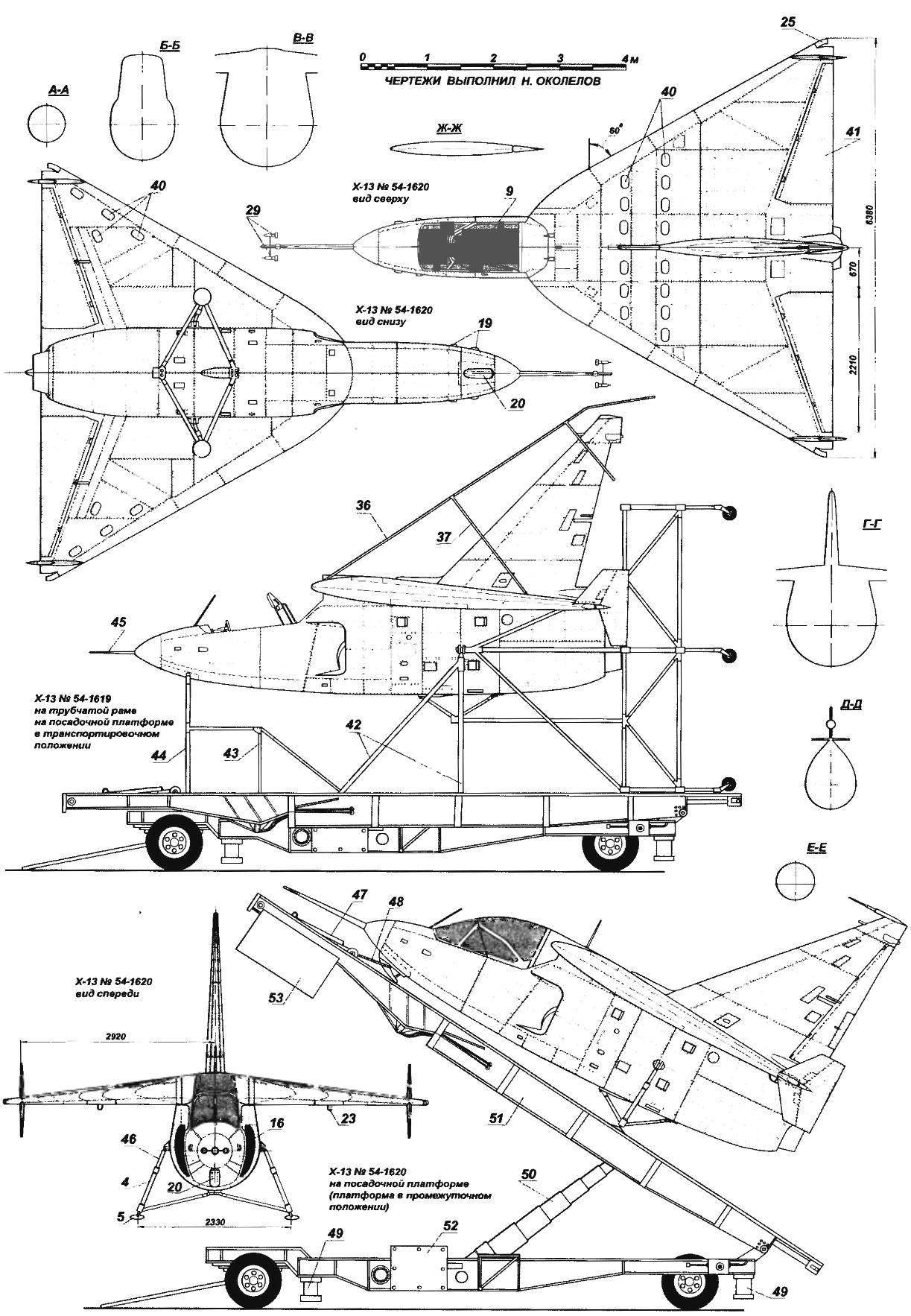 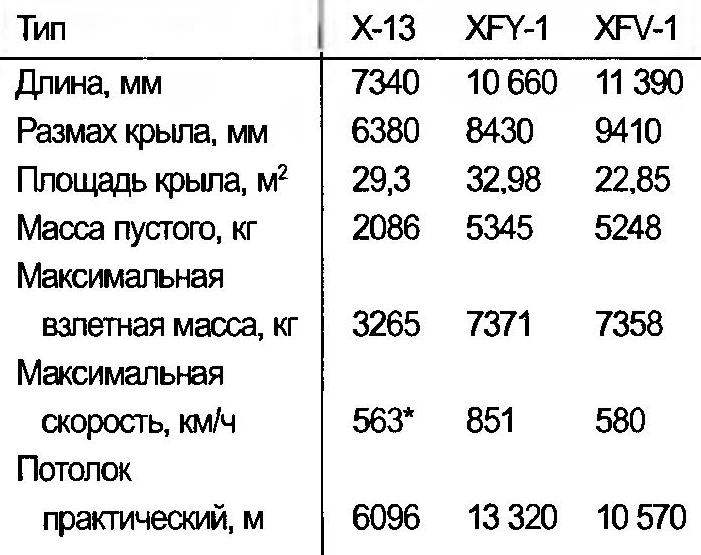 After this flight, the canopy was altered, arranging it on the left side of the window to monitor the pin. This was the end of the pilot phase in the test program of the aircraft X-13. Company Ryan deservedly celebrated its success: after all, VERTUET was deprived of most of the drawbacks of the screw VTOL aircraft companies Lockheed and Convair. For example, the vibrations of the propellers and the power plant, the effects of ground proximity, etc. in addition, the process of landing the X-13 took place easier and safer for the XFY-1 pilot did not see where and how it sits. Thus, the X-13 was a more likely prototype of a tactical VTOL than the XFV-1 and XFY-1. It remains to convince the military, well after a demonstration of the aircraft.
The first public demonstration of the X-13 was designed by Ryan in the best American tradition. June 28 at Andrews air force base near Washington, invited more than 3,000 soldiers and journalists. Specially prepared a second instance of X-13 could not fly over the whole country, and its pre-sent to Washington by ship. Beating around America via Panama canal, on the morning of 28 June, the pilots Girard and Everett made several demonstration flights using the platform to anyone not previously seen before the plane, prompting rave reviews from the audience. VERTUET sat on the platform, clinging to it with his hook, easily, like a fly on the wall. And still no plane in the world can do such things.
Specifically for this flight platform was finalized. To put next to it a ladder for the operator of the landing was undignified, and for him the upper-right corner of the platform is secured a square cradle, painted black. The culmination of the show was the flight X13 base Andrews to the Pentagon landing near this famous building. The plane flew to the Pentagon in a vertical position by the Potomac river in the cloud of water spray, producing a lasting impression. However, Girard is located in the cockpit, was not thinking about the impression produced, and the fuel stock which inexorably ended. The water spray settled on the lantern, bringing “zero” and without that a poor review Only because of the operator, he successfully landed the plane.
12 September 1957 X-13 No. 2 returned to base Edwards to join the first instance that were military test pilots. Nevertheless a good show and a successful test could not open “aluminum fly” the way to serial production. In September, the military pulled the funding and closed the program X-13. Were closed and other American program to develop VTOL vertical position of the fuselage. The main reason was all the one — complexity of uspet and landing for a pilot of average skill. X 13 “sinned” because a jet of gases from the turbojet it destroyed the concrete surface of the runway.
September 30, 1957, X-13 took to the air one last time. Some time the Americans took him for all aviation exhibition, exhibiting in the static display. In may 1959 VERTUET No. 2 deposited in the United States air force Museum in Dayton, and in 1960 the company Ryan gave VERTUET No. 1 together with the platform of the National aerospace Museum.
Design description X-13 VERTUET
Experimental aircraft vertical takeoff and landing X-13 VERTUET performed on the aerodynamic configuration “tailless” with the high-set Delta wing and single-fin tail.
The fuselage is semi-monocoque is structurally made of three parts. In the front were the pilot cabin and the main instrumentation. On the first power of the frames were fixed hook with lock type “carbine” for planting the device on the cable. In the case of use of a wheeled chassis hook shot, and his place was fixed nose controlled landing gear. In the middle part of the fuselage housed the fuel tank, hydraulic units, compressed air and power frame with the fixing points of the engine. To this frame is attached to the Central, most loaded damper of the bumper. In the rear fuselage housed the engine, an extension tube and swivel nozzle.
Fuselage is dural. In the area of the nozzle was applied to the plating of titanium alloys. In the cockpit, installed a set of pilot-navigating devices, including available control devices, reactive control system and the pointer of the angle of rotation of the nozzle.
The cockpit with a large area of glazing. Ejection seat could lean forward at a 45 degree angle to ensure proper operation of the vestibular apparatus of the pilot and to improve visibility in vertical position of the fuselage. 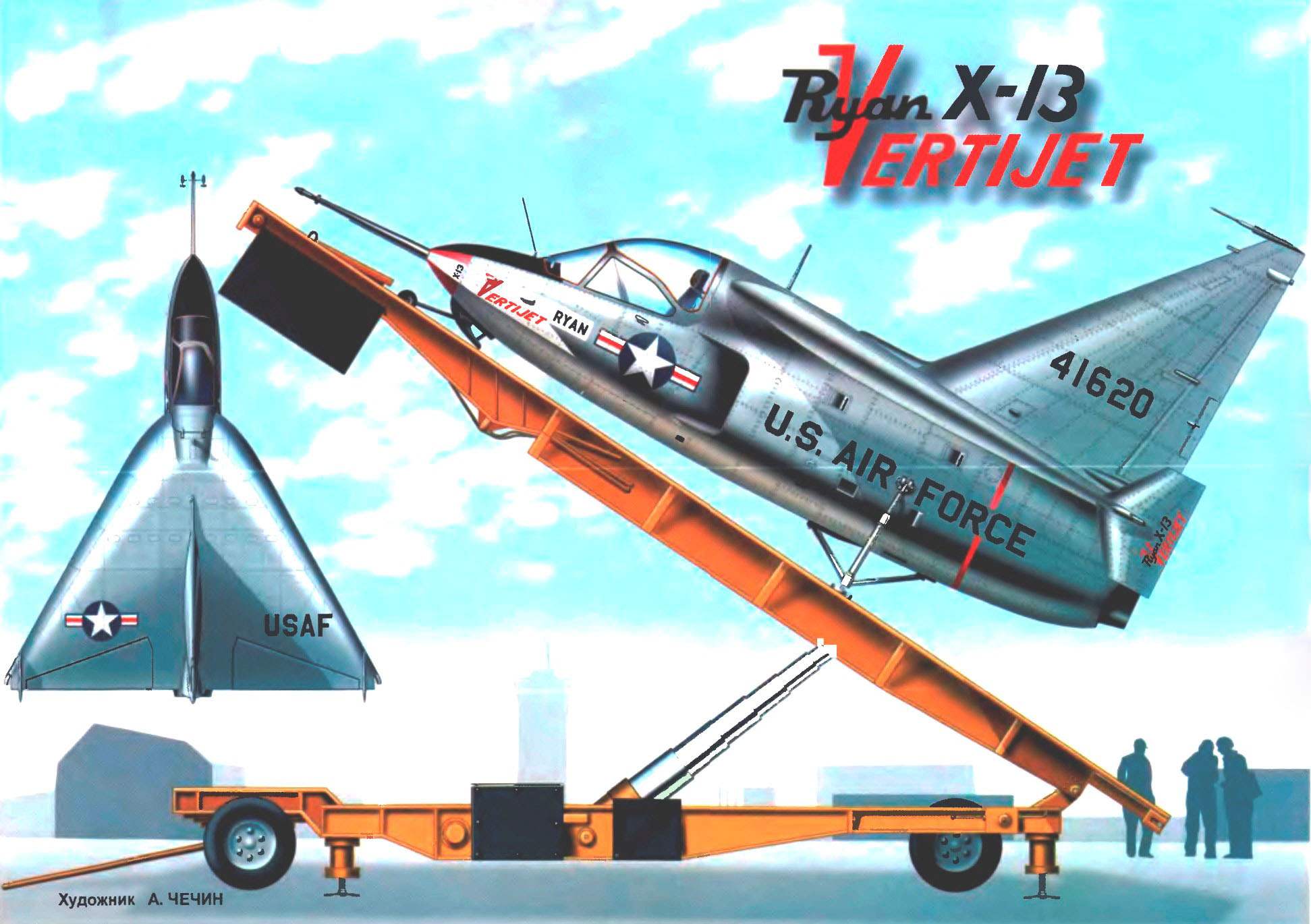 The two-spar wing, with front and rear longitudinal walls. Wing sweep on the leading edge of 60 degrees. The wing was a sealed design and is attached on top of the fuselage on the main power frames. At the ends of the wing fixed rotary gas handle bars and additional vertical surfaces. Compressed air from the compressor turbojet was fed to the wheels through the pipelines laid in the thickness of the wing. To control in horizontal flight, the roll and pitch was used on the wings elevons.
Keel triangular plane, a large area defined by the aerodynamic parameters of the aircraft. The height of the apparatus when it is mounted on a wheeled chassis was 4.62 m In the upper part of the keel was mounted a receiver air pressure and the nozzle of the gas booster. In the root of the keel was fixed to the container of a brake parachute, the only means of braking during landing X-13 on a wheeled chassis. The rudder was equipped with a trimmer.
As the power plant used engine Rolls-Royce AVON R. A. 28 axial 14-stage compressor and two stage turbine, develops a thrust to 4540 kgs. Engine length of 2.88 m, the maximum diameter of 1.05 m, weight 1312 kg. fuel Consumption at maximum capacity — about 65 l/min Armament on a plane could not be installed.
A. CHECHIN, N. Food reserve was