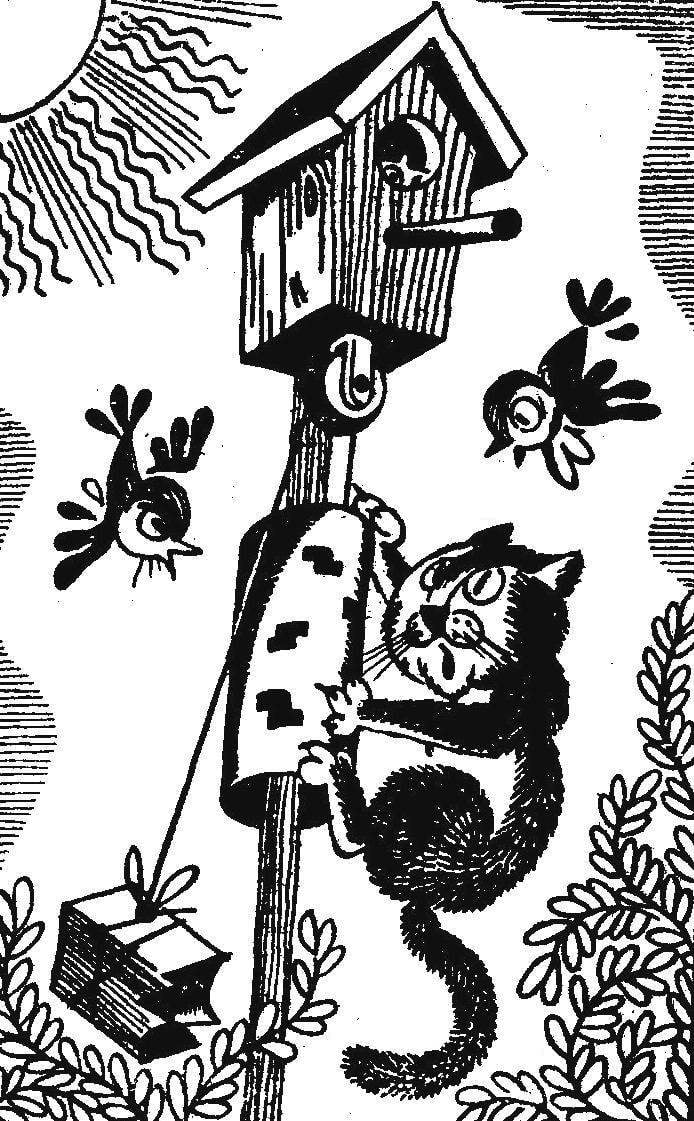 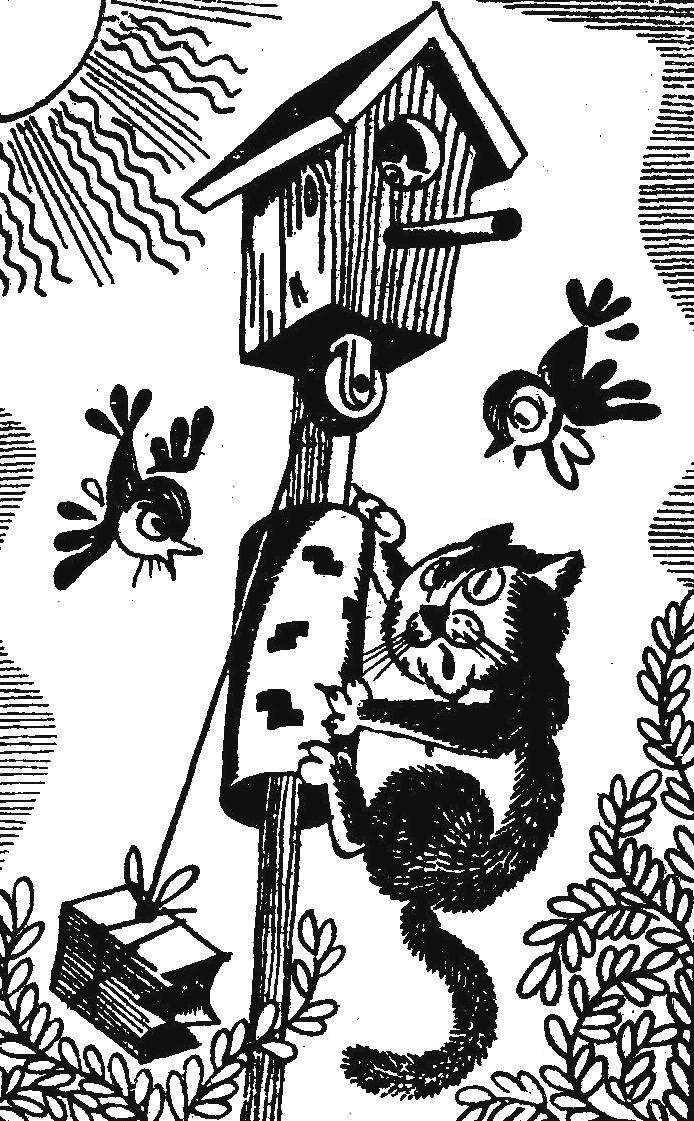 (The story of one of the invention). Red cat almost ate squarecat. She climbed to the skvorechnya and wanted a paw to climb inside. Well, we Petka noticed!

— However, all the time to watch it once, it is necessary to take action, to arrange it so that she couldn’t climb the pole. — Petya started rubbing his nose. This meant that he strongly thinks. — If the pole sunflower butter, nothing happens: the cat’s sharp claws and it will not slip, in General nonsense. You can, of course, have a barrier in the form of an umbrella, but it’s not an option — too cumbersome, like a rotten mushroom. It is necessary to discourage her hunt.
— To malupit as with a rod, he made his innovations and me.
— Nonsense! First, she won’t understand at all, and secondly, at the crime scene, she won’t get caught.
Petka began again to RUB his nose so that he blushed.
In short, on this day we did not come up, but the next early morning Petya came running to me as neglectedly.
— I have an idea! We will wean, I’m talking about the cat they say, to climb once and for all. You know? In Siberia in this Way produce the bears. Dig in the post, tied on top of the hive with honey, and on the pillar, four meters to five from the ground, hang on the rope block. At the bottom around the pole stick sharp stakes. The trap is ready. The smell of honey beast climbs a pole, but the block prevents him; bear pushes him out of the way, chump and whack him on the head. The bear will be angry, ka-AK vdarit on the block, but that ka-AK vdarit bear, and so on, until, until beaten, wounded bear will not fall on sharp stakes.
— So a bear and not a cat, — I said.
— All the same.
Turned out to be that care.
Red, when they reached the block, he was not to push, and two to three tale passed him and climbed further.
— Did not work — sadly said Petya, when we manually ran the cat. He stared at the pole, and I at him. So we stood for a long time, and I involuntarily flinched, when suddenly Petka shouted:
— Eureka! Go! In the forest, felling.
On the plot where lay harvested birch wood, Petya chose a few smooth, straight Kruglyakov and stripped them from the bark. House Petya tried Berestove tube to the pole. One, about a meter in length, came to the place and glide easily on it. It’s the Petka and tied the twine, and where before hanging block, added a block. Passing the twine through the block, the second end tied a stone, and when released the end of it, but Berestove tube went up to the unit.
— That’s all! ‘said Petya. — Went to the Shed!
The cracks between the boards we have erected an observation post. We had to wait long. Cat, gently precrisis to the pole, sat down next to him and lifted her face up. Ears pricked, the tip of the tail tensely wagging. Apparently, she heard the squeak skvarca, romp in the nest. Because she’s already jumped to the pole and started to climb up. Got to berestovoy tube… slid down on it. Falling to the ground, she momentarily released the bark and the stone placed the phone to his former place at the unit.
— Acts! — Petya whispered, pushing me with his fist in the side.
Don’t know if something is a cat, but, finding himself for the second time on the ground, she snorted resentfully, picked up the tail pipe and with an independent view went home. We Petka breathed a sigh of relief — now schwarzatal nothing to fear.
A. VELIKANOV, G. Gorokhovets, Vladimir region