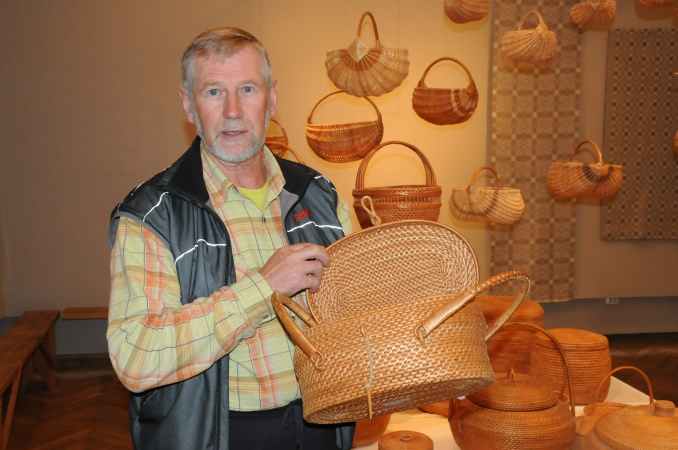 (The end. See the beginning here)

It is difficult (but apparently impossible) to imagine the way of life of the Russian people without baskets – these baskets are truly versatile, “next of kin” of a village fence. They came, as they say, from time immemorial. There was told its name. After all, “corsite” – the ancient Slavic word that means to weave.
And “tenacious”, a timeless basket was not only because of ease of fabrication, material availability, the possibility of universal use. Products these lightweight, elegant and yet very practical. Besides have a lot of other equally valuable qualities.

For example, mushrooms, brought from the forest in a willow basket for a long time remain fresh. First, because crease. Secondly, they are constantly ventilated. Thirdly, the air passing between the bars containing tannins, purified from harmful microorganisms. Fourth, willow twigs perfectly absorbs excess moisture. Finally, the fifth: they are rods of wood, a natural material, and not some plastic or a dull metal. They are less heated from the sun, thereby protecting the contents of the basket from overheating.

Types baskets there is a big set. They are also different in their particular purpose, and shape, size, and technique.

For example, with braided wrap “Express bag”, manufacturing technology which is described in detail in a previous publication “M-K”, not to be confused with specific baskets with a more narrow “specialization”. Intended, say, for storage of fruits and vegetables or collect the same mushrooms-berries. Quite often they even weave different.

Instead of a simple pletea (with styling rods through a single riser) sometimes use so-called oblique. The netting here is already inclined rows. Acceleration is achieved by the fact that the script performs several close-knit rods. This is a purely decorative effect. Especially, if the series of painted rods alternating with unpainted.

When you want to give plateau increased strength, turn to the netting rope. Perform it alternately perevela two or three thin rod. Sometimes using “checkerboard”. Here the rods with contrasting color are placed in pletivo not through a single riser, as in plain netting, and 2-3 to get a staggered rectangles or squares.

Very impressive looks pletivo pigtail, when three adjacent beam twist as ordinary braid. Do not forget to consistently include in the generated script the bars of the framework.

The sequence of weaving of the bottom of the basket with a round bottom:

1 – manufacturing foundations (crosses); 2 – laying of the first rod; 3 – the tab of the second rod for weaving with an “even” basis; 4,5 – beaded crosses (to continue operation with a single rod requires an “odd” basis – to weave or to remove the rod cross)

Each master has their favorite basket weave of vending designs, a unique style of performance one way or another
work. It is advisable, I think, to consider some of these “secrets” with specific examples.

Features weaving baskets with round bottom is dictated mainly by the shape of these tanks, and the specifics of the material in combination with the established traditions of working with him. Usually use them for flowers or to gather mushrooms and berries. And in the voluminous Housewives love to store lingerie: it is very good it they saved, ventilated, does not dampen.

Start to weave the basket from the bottom, with manufacturing bases (crosses). Take a few twigs of medium thickness, they cut the slit in the middle through which pass through the same perpendicular to Lozin. And start to braid formed in the center of the square two thin whips towards each other (see Fig.). Making of sales, diluted basis in pairs to the sides. And in turn transferred to simple plateau when the rods cross diverge already alone from the center (the sun). 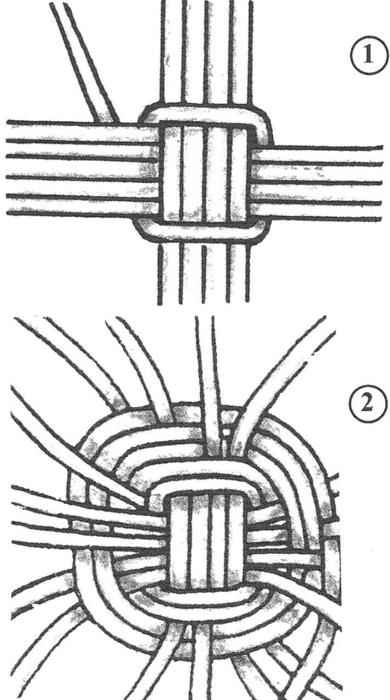 A variant of weaving the bottom (odd rod):

1 – making the crossing; 2 – entanglement with simultaneous wiring bars of the framework 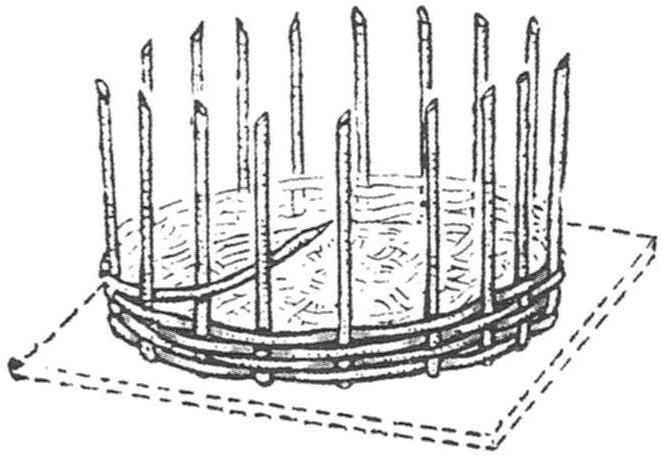 The transition to weaving the sides of basket with a round (oval) bottom: previous placebo temporarily nailed to the Board

To braid at the same time two whips, and with thorough potyczki to the coils of the helices is maximally adjacent to each other – for the patient and plodding, so many people prefer to go to weave one long and thin rod. But for this we have to introduce the basis of another beam.

Sometimes from the beginning limited to the netting with one whip. In this case, an odd number of rays at the base is laid immediately after receiving a cross with a square in the center (see in Fig.).

For convenience of weaving the sides of basket it is recommended to beat the woven bottom (temporarily) to the Board and, turning down radially radiating bars the basics up, to continue pletivo. But there is another option: after making the bottom further the work carried out by the template. As the last used a wooden disc or suitable for the size and form of the material in “utility” (older pans, buckets, tanks, etc.). Moreover, the rays of the base and the bottom tightly to the template, and the resulting pillar sidewalls connect at the top of the beam.

The first rows of braiding stands are a considerable burden, so the rods are usually knit of a double or triple
rope. And then move on to simple plateau.

Manufacturer of basket with an oval bottom differs from the above method are mainly an increased number of threading through the slot of rods when carrying the cross. It should also be remembered that to weave each new whip or the rack you want in a specific order, removing the ends, as shown in the illustrations. To connect two rod, the end of the first and the second cut obliquely. 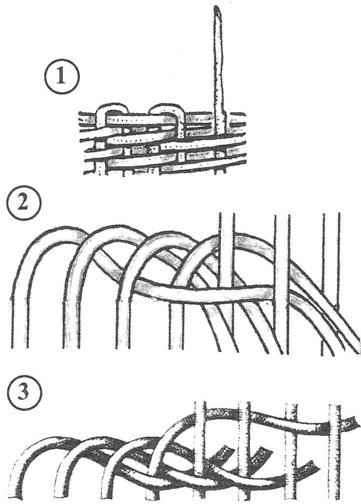 The common seal of the uprights at the sides:

In place of bending of the rays (spokes) between the bottom and the sidewall, and the upper edge of the sidewall should weave the most durable and thick bars. After completing the sides, the remaining ends of the struts are cut along the axis and putting it in the weave or braid together.

Well established itself, and also the way to seal the sides, when every pole plant for the next two. Instead one can bend and make two subsequent not one, but two rod immediately. At the ends, of course, derive inside the basket and cut the “mustache”. Practice often and hardened way to seal when infused multiple times consistently every stand or every adjacent pair of racks.
Podnatorev, many decided on sealing the sides of the tail: firmly, boldly, beautifully. But the technology is. Consistently bend each rack and have at the next. Moreover, the ends of their output is already not inside and outside. Tying thread two (three) of the rod, twist the bundles formed as a braid, consistently including the bars in pletivo. The ends of the braided rods removed under pigtail.

The whole cycle is repeated, continuously including new bundles of twigs as long as the braid is not saraswats along the entire side. And complete the work of attaching the handle.

Options for the finished basket with a round (oval) bottom:

1 – a round basket of mushroom; 2 – oval basket for berries; 3 – a Laundry basket with a lid (sealing the sides of the completed rope; 4 – round flower basket 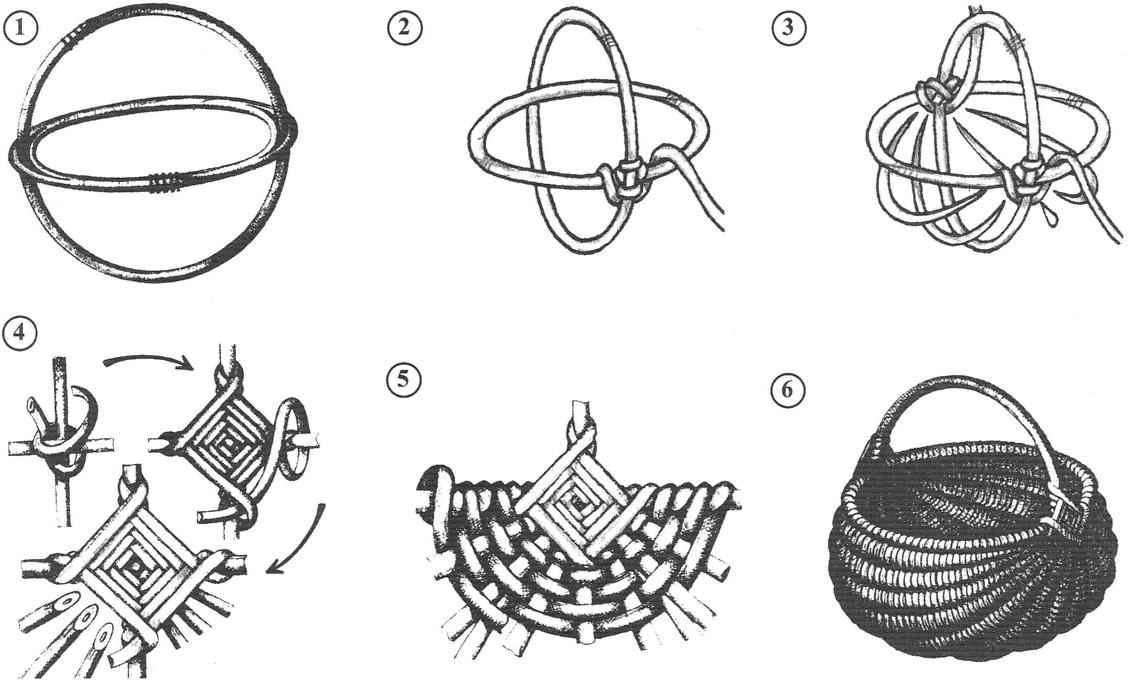 Braid frame strips of the split in half, from the beginning to the end, Lozin. Start with the intersection of the hoops. Stacked 4 “diamond”, the end of the tape fix. Hoops lay between 6 rods, edges and entwine their simple pletion spiral. Each time as soon as the tape comes to a wrap, located in a horizontal plane, making a turn and a half around him with the continuation of weaving, but in the opposite direction.

Naturally, as the distance from the location of attachment of the handle, the distance between the diverging fan-shaped fins increases. And when it becomes too large, it is reduced, putting a new, additional ribs. Insert the pointed ends of the bars plateua.

The embodiment of the basket of spherical shape with frame handle:

1 – assembling the frame-stick of the three hoops (side view); 2 – twining spirals diverging from the bottom hoops and oversight of ribs

The entanglement of the ribs of the basket are uniform: that from one end of the handle, then the other, by firmly pressing each new round of the spiral to the previous one. Doing it previously mentioned with a mallet. Obliquely cut end of the rod is withdrawn inside the basket. The handle of the finished product, wrap around, stacking the coil to a coil in a spiral, but used here already the tape, similar to that used in fixing the point of intersection of the hoops – pletion type “diamond”.

Braided product with the frame-handle -the original version of the basket of a spherical shape. The basis of his serve three fan-shaped divergent wrap: large in the middle, and a little smaller diameter on each side of him. Put together the contacting parts of the wraps twine ribbon of the split in along Losiny. This is the frame handle.

Entanglement of divergent fan-shaped hoops of the frame with the lay as necessary, additional ribs are in a spiral as described above. 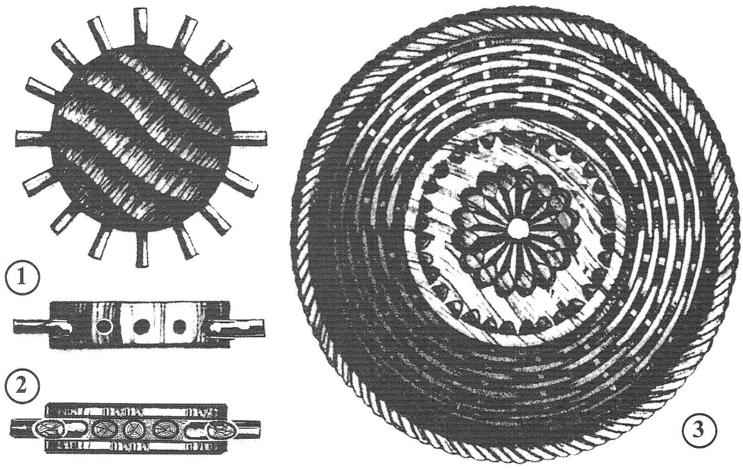 Decorative dish (bread) can become a decoration of any modern apartment. The form of this original wicker products can be, naturally, any. But the Foundation runs well-planed boards with a number of equidistant from each other holes for radiating the bars of the framework or end groove, which is inserted into the thickened ends of these rods. Formed thus the “sun” braid thin whips one of these in the beginning of the article way. Including “Ahmadou”. The side dishes are sealed in exactly the same way as the baskets. And on the bottom perform geometric carving or painting.

Furniture (see illustration) weave, with a durable, pre-prepared frame. Used to her plateua tend to diversify, showing a maximum of ingenuity and artistic taste and patience. All this will subsequently be rewarded handsomely. Because these baskets, especially furniture, which will weave their own hands, no one else will be.