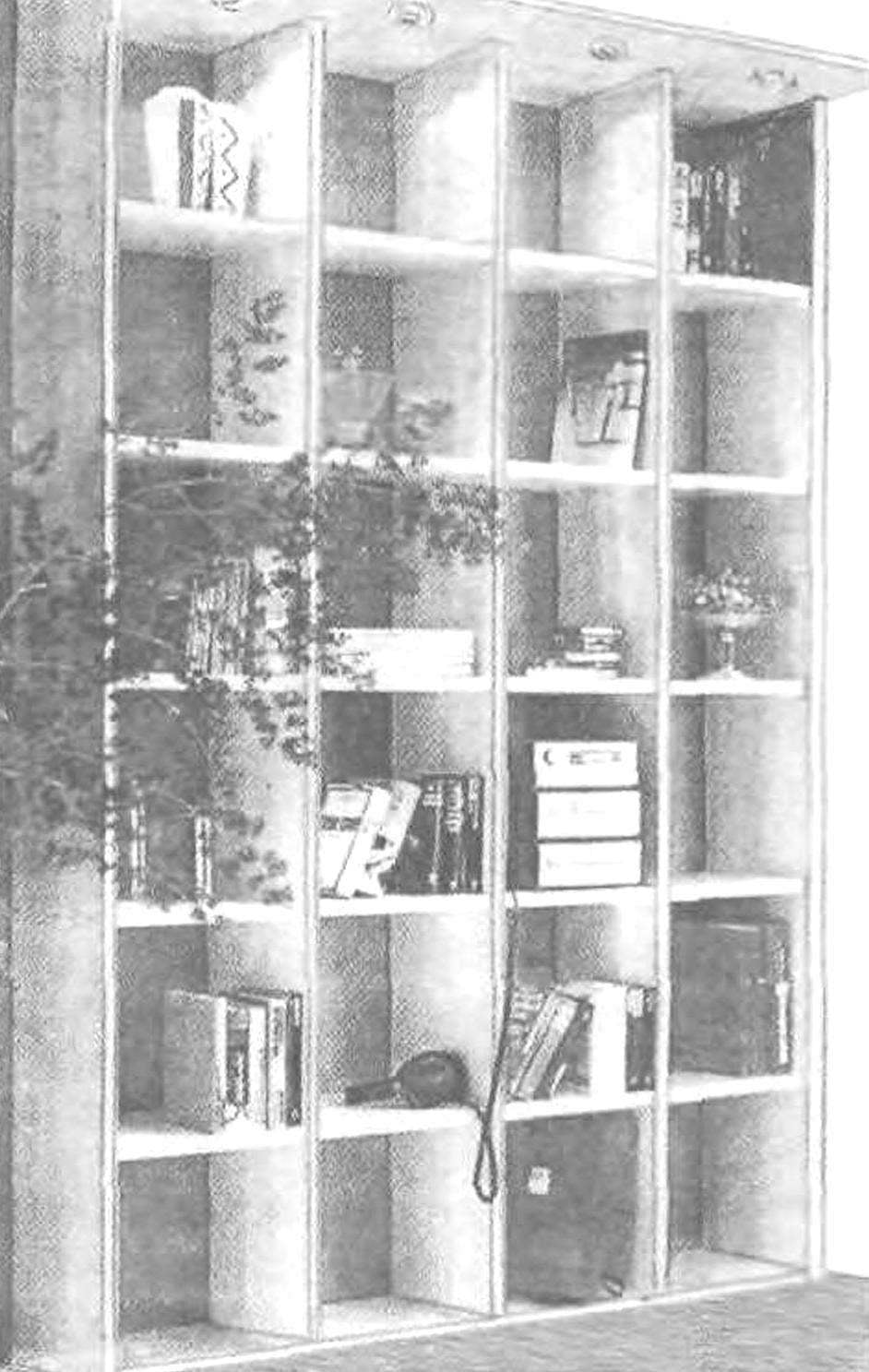 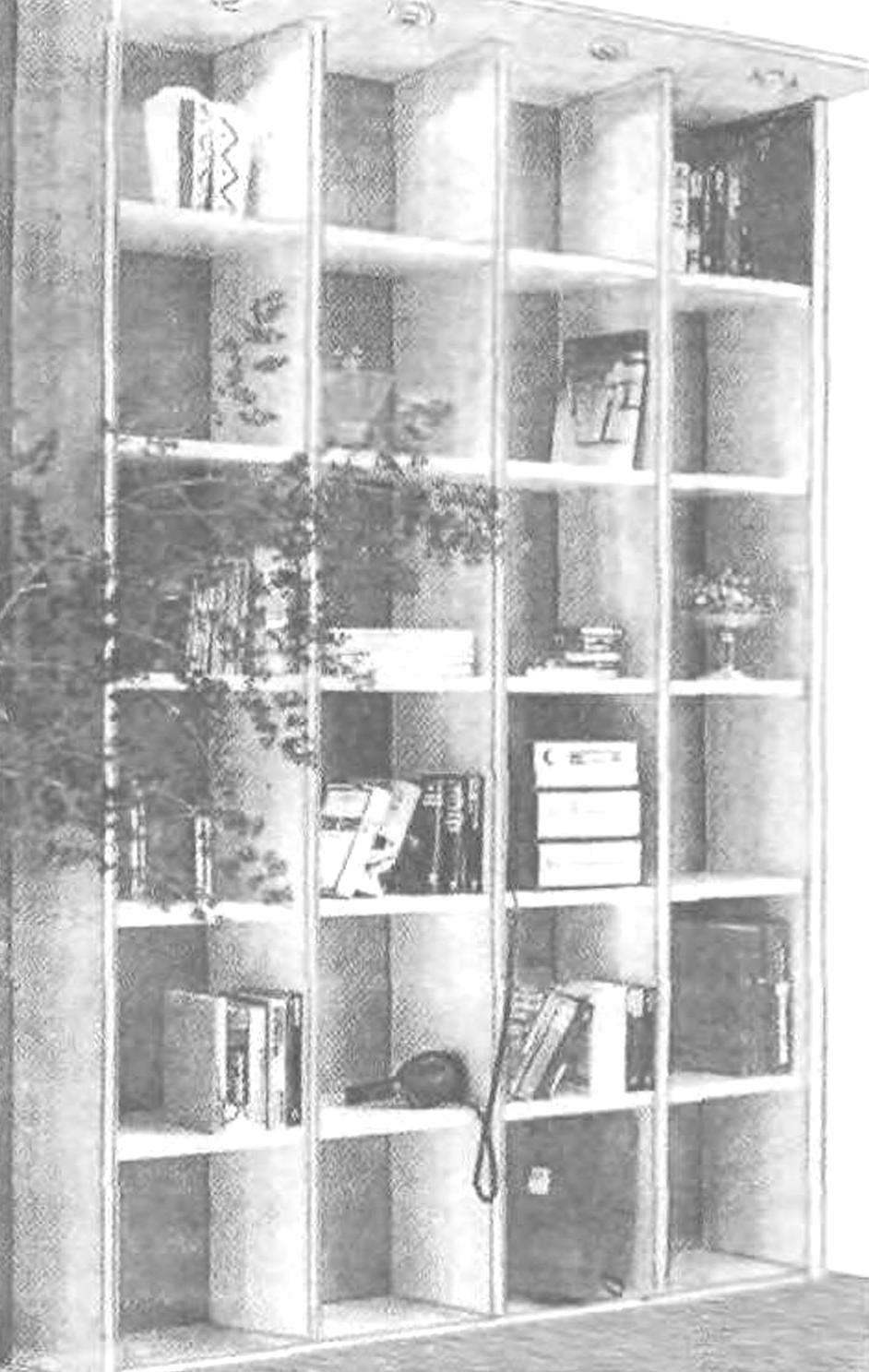 It is believed that the atmosphere in the interior of the home, it is desirable from time to time to change — to maintain the psychological effect of novelty and revitalizing sensations of comfort and freshness of decoration. However, it is not necessary to spend money on new set — quite nice to rearrange individual items of the already existing, and the result will be achieved no less.
But such a technique is feasible only under condition, if the furniture is not so bulky and not too “attached” to the walls. As, for example, offer a popular French magazine “Maison bricologes” homemade universal design, which is a multi-tiered wire mesh bookcase, assembled from simple wooden panels. This kind of material is the most available for DIY because it can be a furniture Board, and particleboard (in an extreme case — thick plywood), and to work with it quite a normal household tools: handsaw, drill, Yes a chisel with a screwdriver.
The resulting design can be used not only as shelves but also as a wall unit, bookcase, display rack (even in the garage under the tools and spare parts). Being shallow and compact, this version of furniture takes up little space when your plane is adjacent to the wall. And since the rear wall of the Cabinet is missing, it can be used as a decorative and functional divider that distinguishes, for example, a corner of the schoolboy, an office or recreation area.
In detail about the details
Preparatory operations for the production of versatile shelves will depend largely on what type of material (course and experience) includes a home master. Therefore, the drawings reflect possible approaches to the procurement of the parts (listed sizes are approximate). 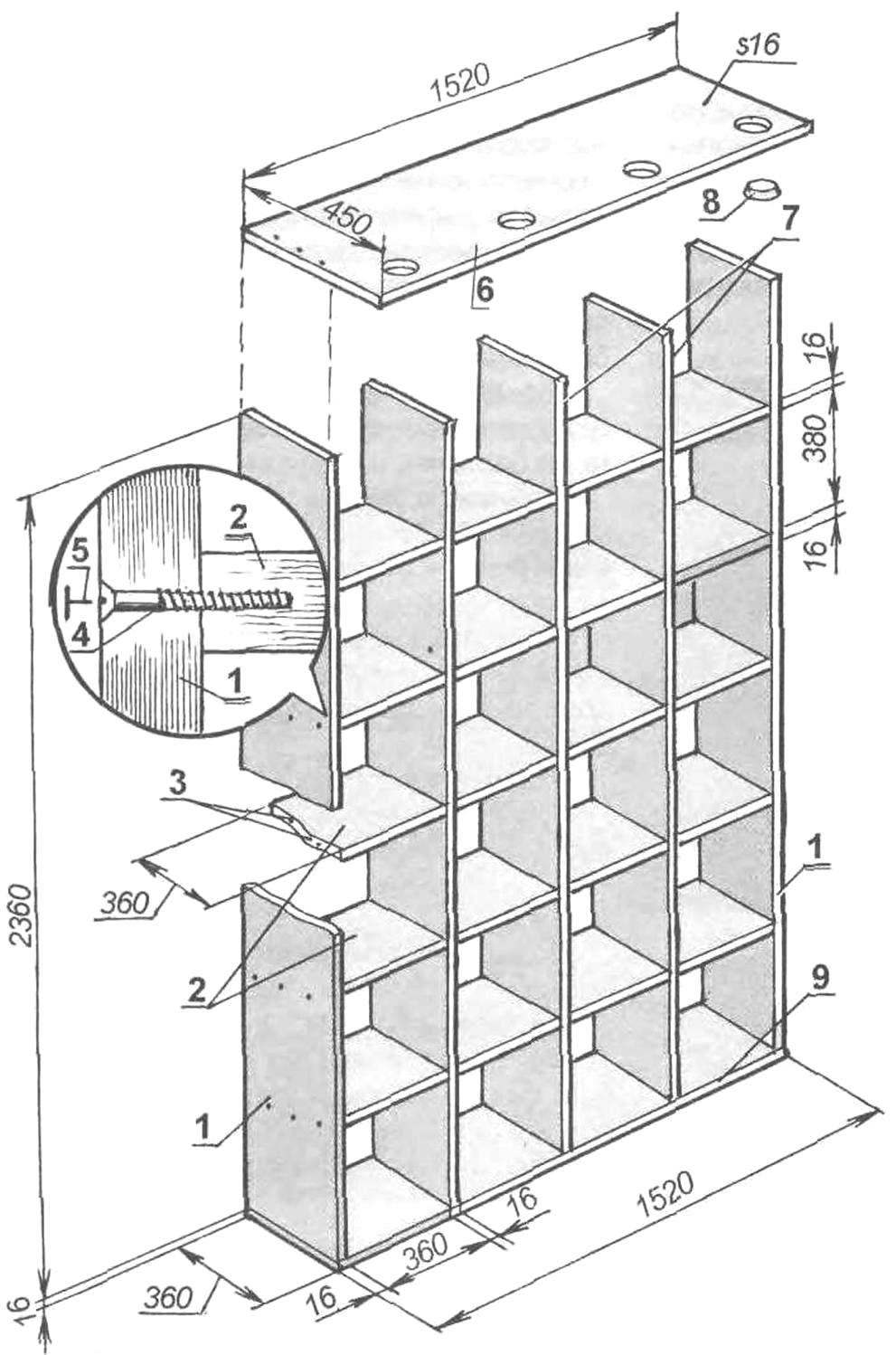 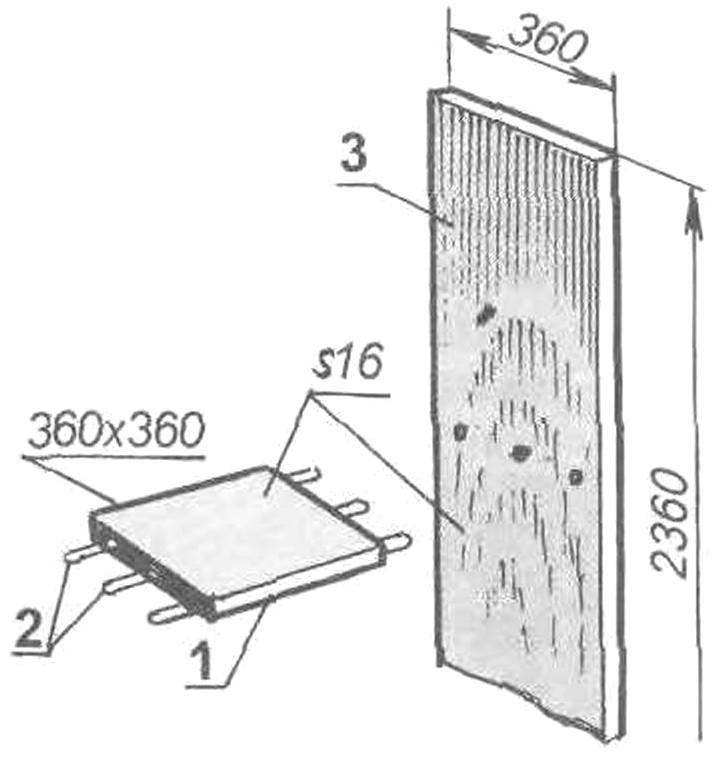 Connection of main parts of the shelves:
1—shelf; 2 – false spikes; 3 — the Central vertical panel
The first of them is designed for the case where there is an opportunity not to limit yourself to the dimensions of the workpiece (and this is especially true of panels of chipboard or thick plywood). Then the design is going to practically of two kinds of parts: vertical panels (reference) and embedded in between a short (square) shelves for plug-in round thorns (wooden or plastic). The only exception will be the upper (“kozlikova”) and lower (“bottom”) panel: unlike the shelves, they are solid, full-width shelves, which contains all the supporting panel in the original grid box. With the top bar protrudes forward like a visor and has a built-in light so called spotlighting, which provides additional convenience for users as well as enhances the decorative effect.
Sequence Assembly
As for the Assembly of the first embodiment of the wall units, then it has its own peculiarities. It must begin with any side (outer) panel, which is shown in the drawing (that is, furniture with screws through the drilled holes) attaches the first stage shelves. And already to them using plug-in round thorns with glue first inner vertical panel-partition. With the back of her hand also on thorns — the second stage of shelves, attached to another partition. The process is repeated until the trailing side panel, which connects with shelves. It remains to insert and attach kozyrkov and bottom panels and the Assembly design is completed. Installation of illumination lamps on the top panel (preferred — miniature so-called halogen lamps) is carried out before its attachment to the outer (lateral) vertical panels.
The figures are presented for the second alternative of wall units, which can be called half-hearted, as the design consists of two halves would be cut in half as the original version. This solution is convenient not only in connection with the use of the original sheet material of small size (for example, in the sale of furniture boards, besides those already mentioned above), but also, if necessary, dismantling of the wall units when moving or shipping assembled.
Independent (see Fig.) upper (I) and lower (II) the blocks of this design makes use of a shortened outer and inner vertical panels and additional horizontal panels on the border blocks. It is possible and other device with special shelves connecting them with the supporting partitions. Here the shelf constitute a full panel to full width of wall units to side of vertical panels with which they are connected in the same way as in the first embodiment. And with internal partitions allowed for a more simple and convenient docking station — opposite grooves, as shown in the last picture. 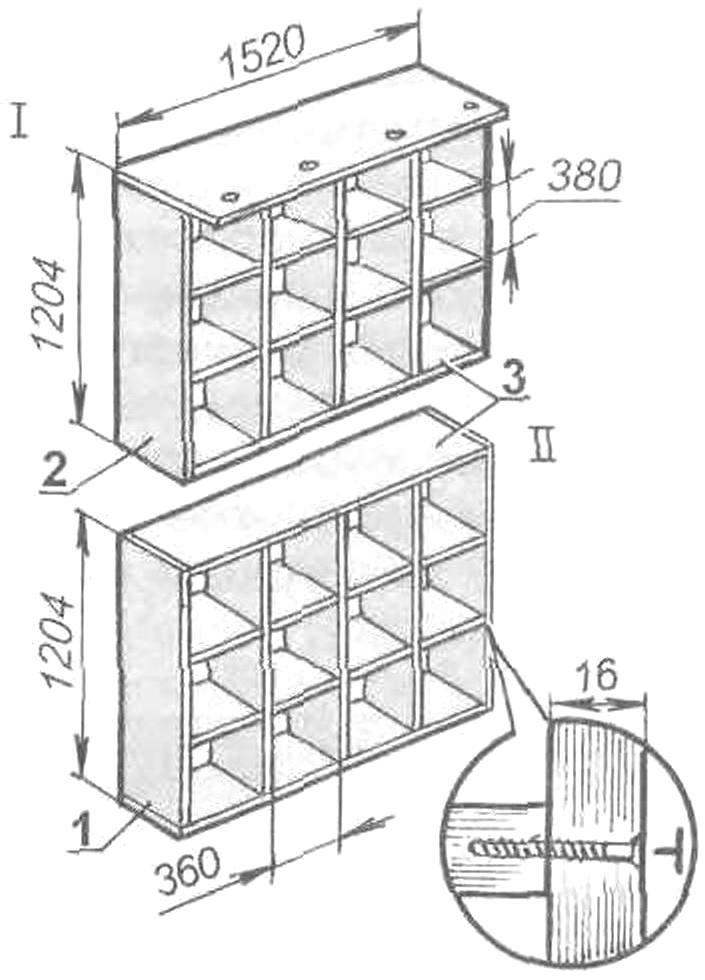 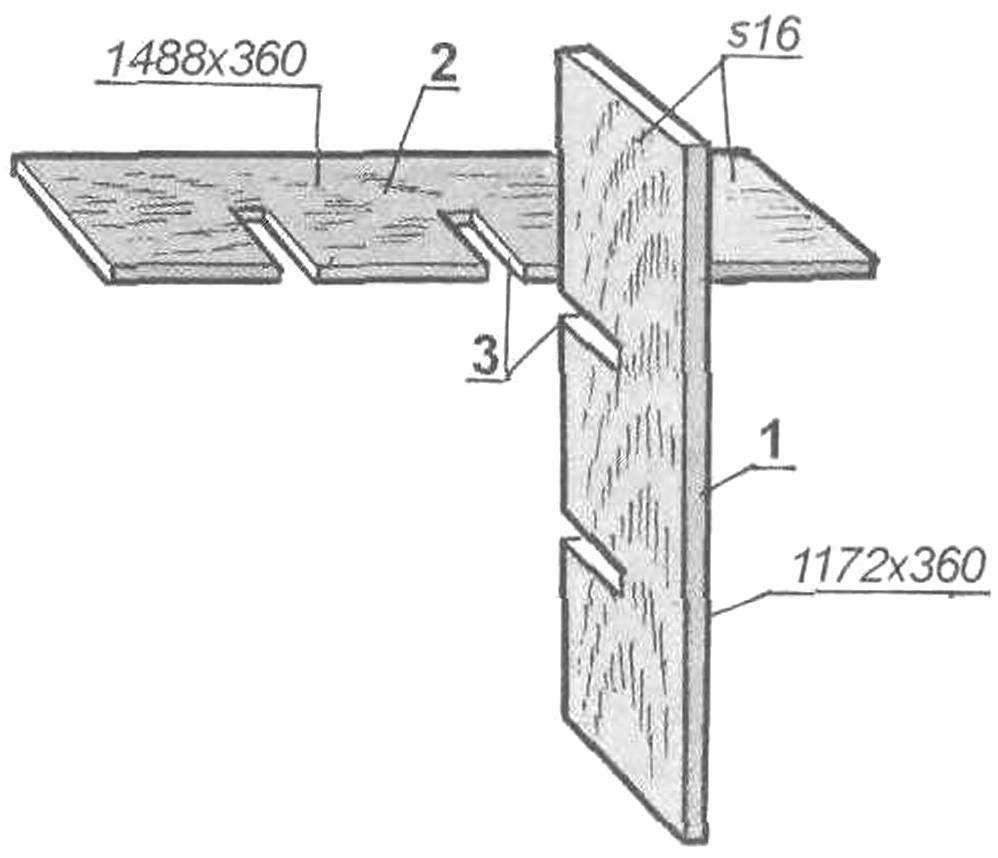 A splice variant of the internal details of the composite stack:
1 — vertical post; 2 — bar-shelf: 3 — counter-grooves for connection details
Method, by the way, opens up new opportunities — for example, the collapsible design: the outer panels are connected only with each other, forming a box in which to insert the grid shelf, and inner vertical panels (walls), connected by opposite grooves, and even without fixing to the box. In this case, to disconnect, disassemble this Assembly (for example, for shifting or transportation to the cottage or country cottage), will not require much labor or time. It is easy to imagine that is removed from within the grille freely is divided into a bundle of separate panels, which are added to riswinandi part of the outer boxes. All this in a new place without any problems going in reverse order.
Finish
It is quite simple for details the second option, if you have used the furniture Board, the surface of which, as a rule, already finished with veneer or plastic (and in the enamel colouring, too). In this case, the revision will only require edge formed after cutting. If they don’t have on the joints, visible of them are pasted over with strips of veneer or plastic ready. As the glue is convenient to use a now common “Moment” or PVA. The first can be applied in a single layer and press: he grasped instantly (so called). And PVA glue is good for at least reliable, if an edge and a strip of edging to apply it in a thin layer and allow to dry (“to touch”), and then repeat the lubrication and after pressing how to warm up. For wood veneers, this can be done simply paving iron and the plastic tape is better to heat the dryer — the hot air from it heats up softer.
Such treatment of edges is also suitable for other materials. But the surface of the panels in this case will require selective treatment. If the plywood is to pay attention to the natural pattern of its surface and in a winning case to save it and to underline processed after sanding the stain, and then covered with transparent furniture varnish in several layers, with intermediate thorough drying and polishing of fine-grained sandpaper.
With regard to the use of workpieces made of chipboard, which you can paste over the texture film “under the tree” (better with existing adhesive backing or taking advantage of the white glue). But it is simpler and easier to paint with enamel paints (at least two coats). It is possible to vary the color: for verticals — one for the shelves — another, which enhances the decorative effect of the design.
B. VLADIMIROV