In the “Modeller-designer” No. 7, 1982, in the collection “Second youth spinning wheels” was told about the device for spinning the sewing machine. The novelty and simplicity of the design interested me and I did the same, only on the basis of the motor from the fan Orbita-3. Unfortunately, this spinning wheel I have never worked, although I reduced the weight of the bobbin to 18 g: when rotating, it not behind the stag, even after the motor shaft was mounted a flywheel. Then I decided to redo the design in their own way — the opposite is true; the rotation speed of the stag was smaller than the bobbin. Turned out, in my opinion, not bad: the device works reliably.

The spinning wheel consists of a base on which you installed the motor from the fan stand with a Central shaft and two brackets intermediate pulley and the guide sleeve.
At one end of the Central shaft made the M6 thread on another shot of the flats in the cross section get a square. Then, in the end, in a hole with a diameter of 3.95 mm pressed stud M4. For reliability it is soldered to the shaft.
The spool consists of two disks, sawed from a plastic coil of the wire mounted on an aluminum tube of length 73 mm, cut off from ski poles. On the outer side of the disc is glued getincome plate thickness of 1 mm. To one made a square hole for coupling to the shank of the Central shaft; the other with a round hole with a diameter of 10.1 mm.
Tightly fitted on the motor shaft, a tubular coupling ensures its alignment with lathed to a diameter of 6 mm end of the Central shaft. To the same end worn drive pulley from aluminum alloy with a diameter at the bottom of the groove 12 mm. It is attached to the shaft by a nut M6. The driven pulley (brass) is pressed onto the aluminum tube, the diameter of the bottom groove 14 mm. Between the pulleys is placed the washer with polished surfaces. 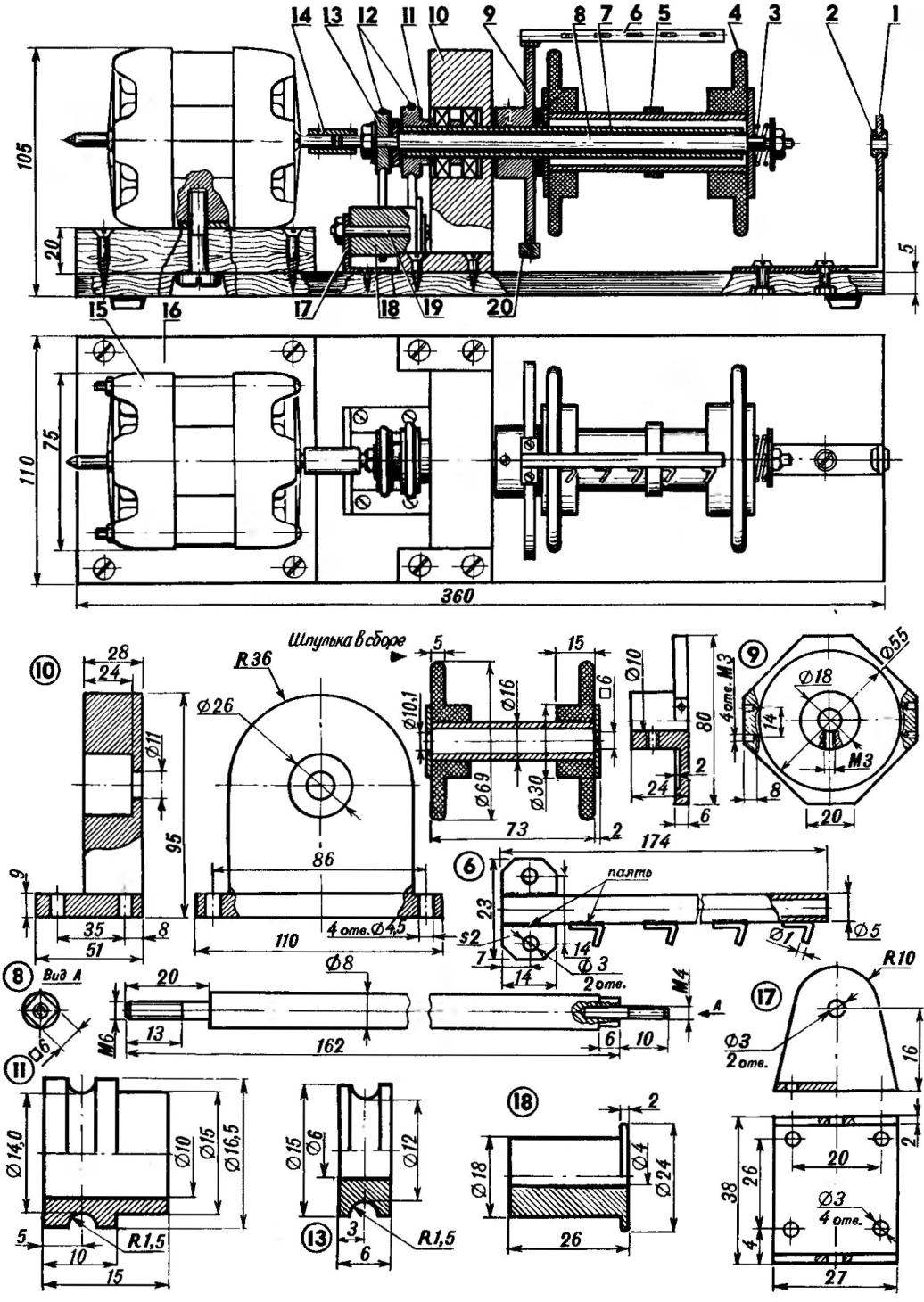 Design electroplate:
1 — guide bracket; 2 — fluoroplastic bushing; 3 — spring; 4 — spool section; 5 — a rubber ring; 6 — the stag 7 — aluminum tube; 8 — the Central shaft; 9 — disk of the stag; 10 — the case of the Central shaft; 11,13,18 — pulleys; 12 — Pasika rubber; 14— clutch 15 — motor; 16 — base; 17 — bracket, intermediate shaft; 19 — intermediate shaft; 20 — the counterweight.
The intermediate pulley is made of steel and freely rotates on a brass shaft mounted in the bracket of sheet steel 2 mm thick.
Stag consists of a disc mounted on an aluminum tube as a shaft, and thin wall steel tube with soldered to it hooks, it is fixed on the drive with two screws M3. On the opposite side has a lead counterweight.
The bracket with the guide hole is provided with a Teflon sleeve to reduce friction of the filament.
A. KUROCHKIN, p. Parma, Komi Republic