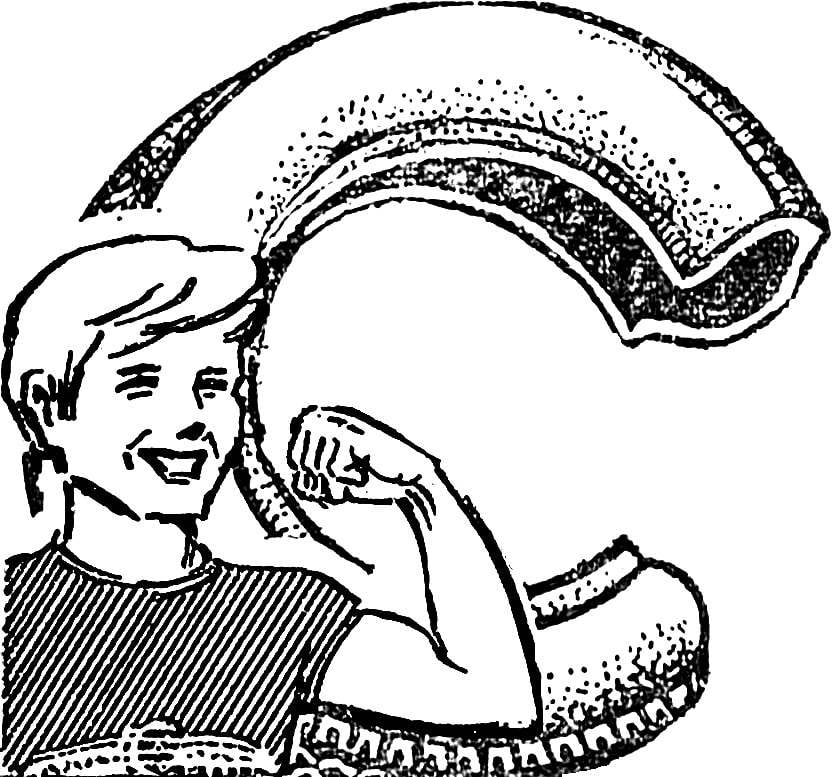 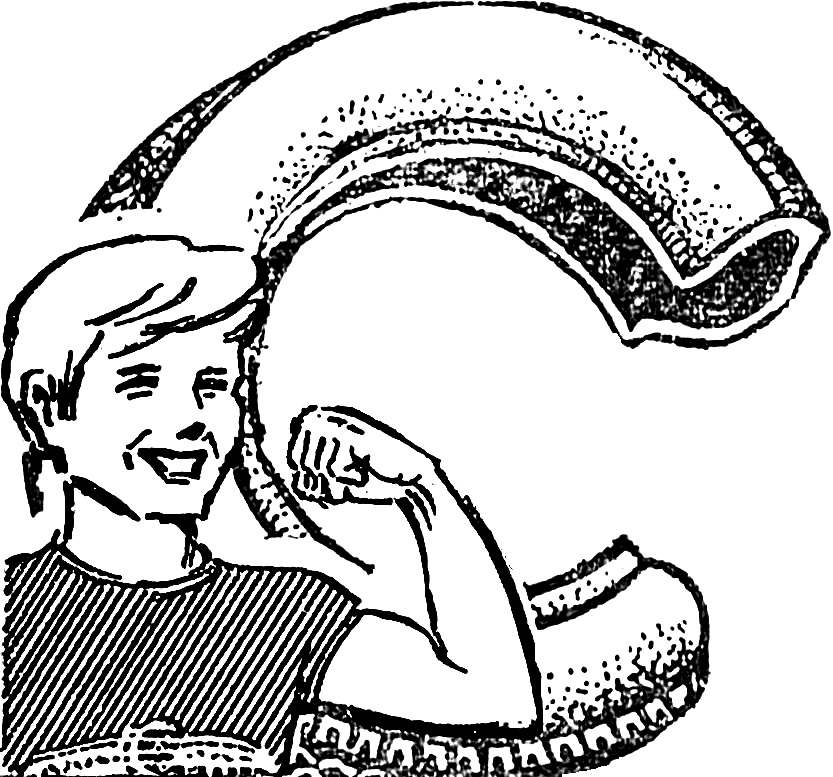 Fun and health that is unusual Playground, which introduces KDM today. All of her sports equipment and simulators can be made on their own from available materials.

There is in Alma-ATA in one of the city courtyards, an unusual site — a sports town, all the shells and the simulators which are made by the tenants of the old pipes and old tires. And came up with this whole complex is a great enthusiast and promoter of sports honored coach of the Kazakh SSR Vladimir G. Gerasimenko. With a group of followers and supporters from the Kazakh Institute of physical education and Republican educational-methodical Cabinet of the state Committee of the Republic they developed more than 200 different physical shells. Most of them are available for improvised forces asset Dezy in any court. And therefore not accidental from all over the country are today in Alma-ATA letters: Vladimir G. please share the experience of creating a homemade sports designs. 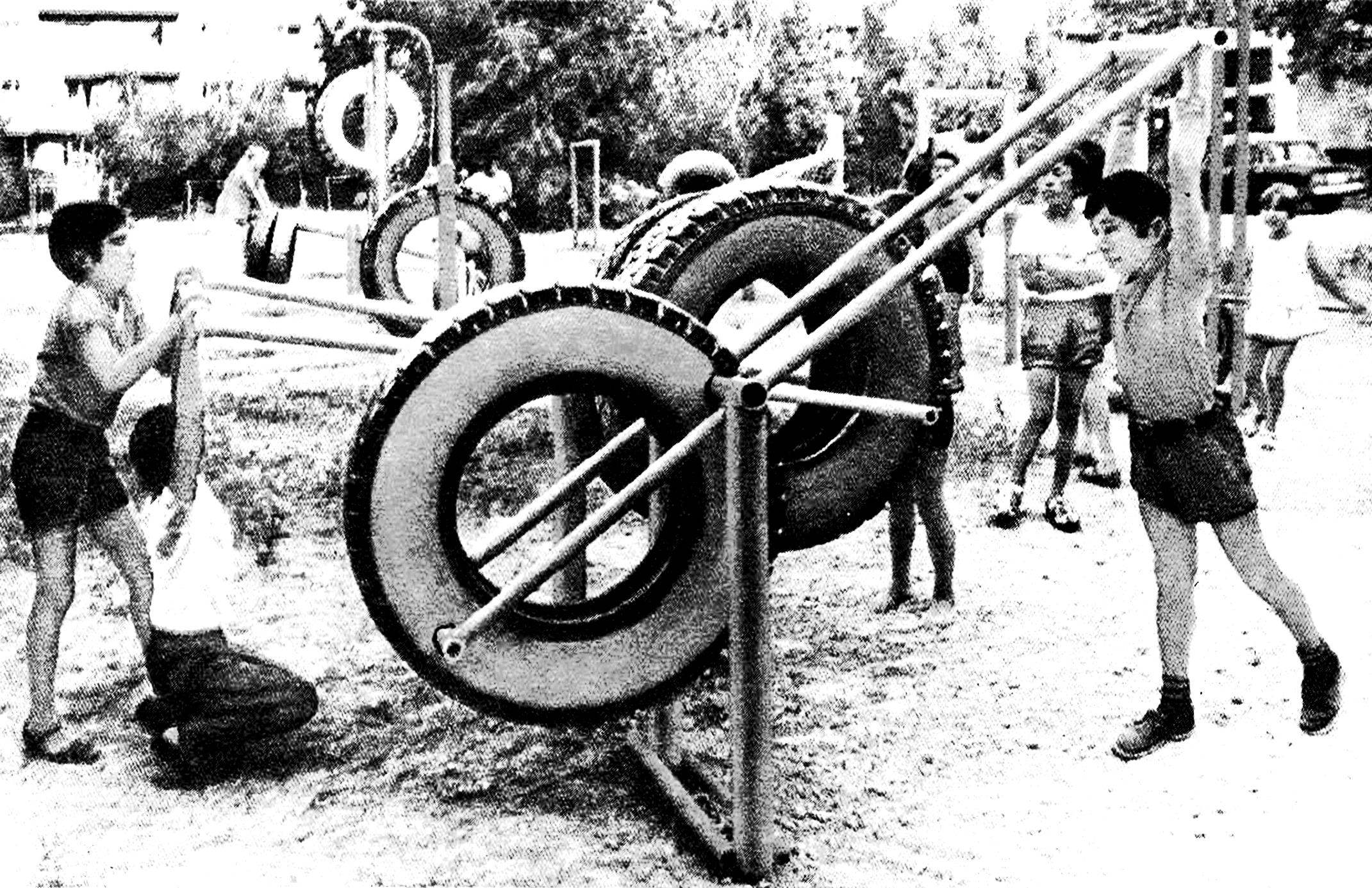 Some shells we present in this collection.
Indeed, all that is needed for the equipment of these playgrounds on their own, it is easy to assemble fleets, garages, personal vehicles, found in the wastes of scrap metal, old tires from trucks and cars, scraps of metal pipes of different diameters, cables, rubber hoses.
To make one yard of machines, will not require special machine tools or welding — just normal tools and devices used by any handyman. Of course, some things are best performed in the workshops of the housing maintenance offices.
Simple and affordable to manufacture, painted in bright colors and pleasing the eye with their originality, these designs will give health to everyone living in the yard, literally from small to large.
Collective rod
Perhaps, on the yard Playground this will be the most popular implement: after all, such a rod can lift if desired several children, organizing a kind of team competition.
Two arcuate racks from old water pipes, the same rough for the fingerboard and four worn tires from cars — everything you need for making a collective post.
Through dug-in arc stands is skipped and the tube-neck. She consistently put on the inner and outer pairs of tires with carried out under the diameter of the pipe holes. Fixed these “discs” on the fretboard in different ways, e.g. using plumbing couplings used to connect pipes. 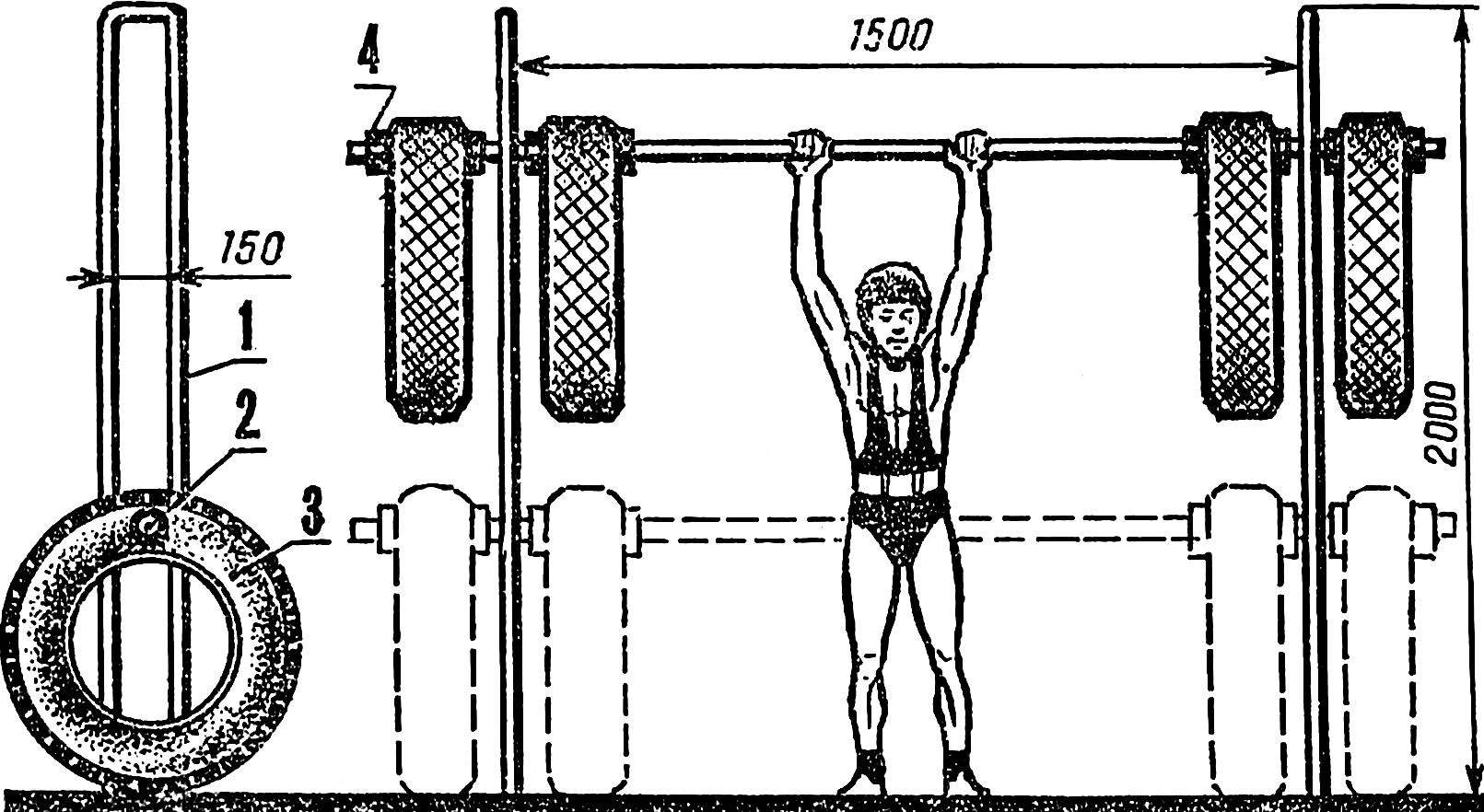 “Rod”:
1 — front, 2 — neck, 3 — disc from tires, 4 — clamp (coupler).
If you wish “discs” can be further weighted, poured in tires sand.
Rod-ring
Designed for individual classes, it is made from one of the tires of the truck and the same water pipes. Arc-in this case one of: its ends pass through holes in the side lying on the ground of the tire and buried in the ground. Because the neck is absent here, in the sidewalls of the tires on opposite sides of the cut holes for the hands.
Is a tyre you can use half, by sawing it with a hacksaw over the median plane: this rod is the lighter weight can be varied also downloading sand. 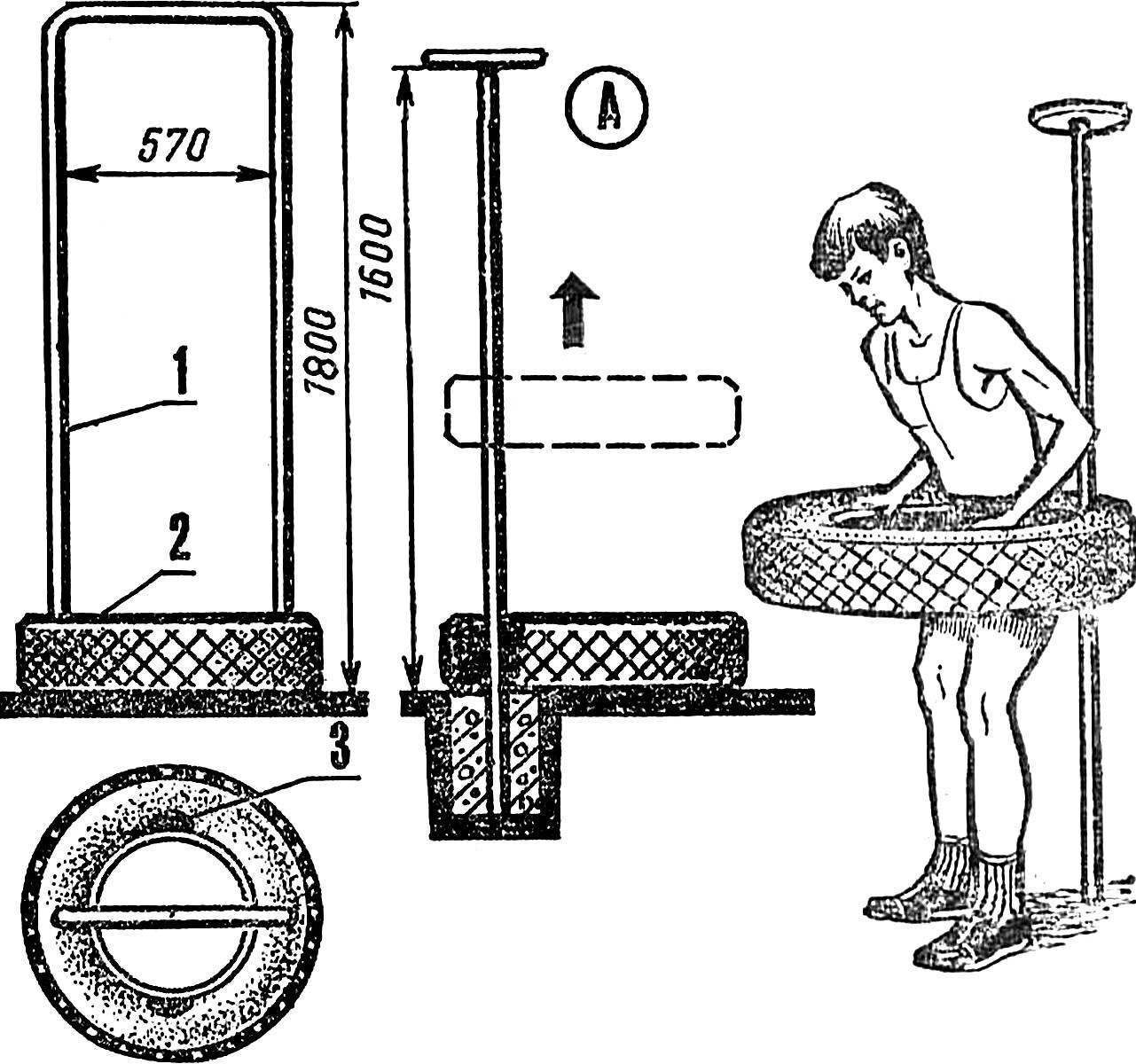 “Ring”:
1 — front, 2 cargo (tyre), 3 — hole for the hands; And — the option of “one-legged” stand.
If the tire plant is not on the arc, and on a single rack, as shown in the figure, we get the shell for the dosage of ascent: the arms can be reduced and the tire will hang samosatenus on the rack and allowing the trainee to rest or to gather strength for further rise.
“The bells”
The projectile, named “Bells”, forced to work almost all major muscles. Like the bell ringer in the bell tower, the trainee pulls back on the ropes, swinging suspended on the crossbar of the heavy tires of the truck.
These “bells” two for each hand. They are strung on the horizontal part of the U-shaped tubular strut passing through the holes in the top of the tires. From the bottom to the tires is fixed by any method (for example, through bolt with nut) metal cable ending loop for the hand. Before incorporation hinges on these tips, you should wear trimming rubber hose: get a comfortable grip. 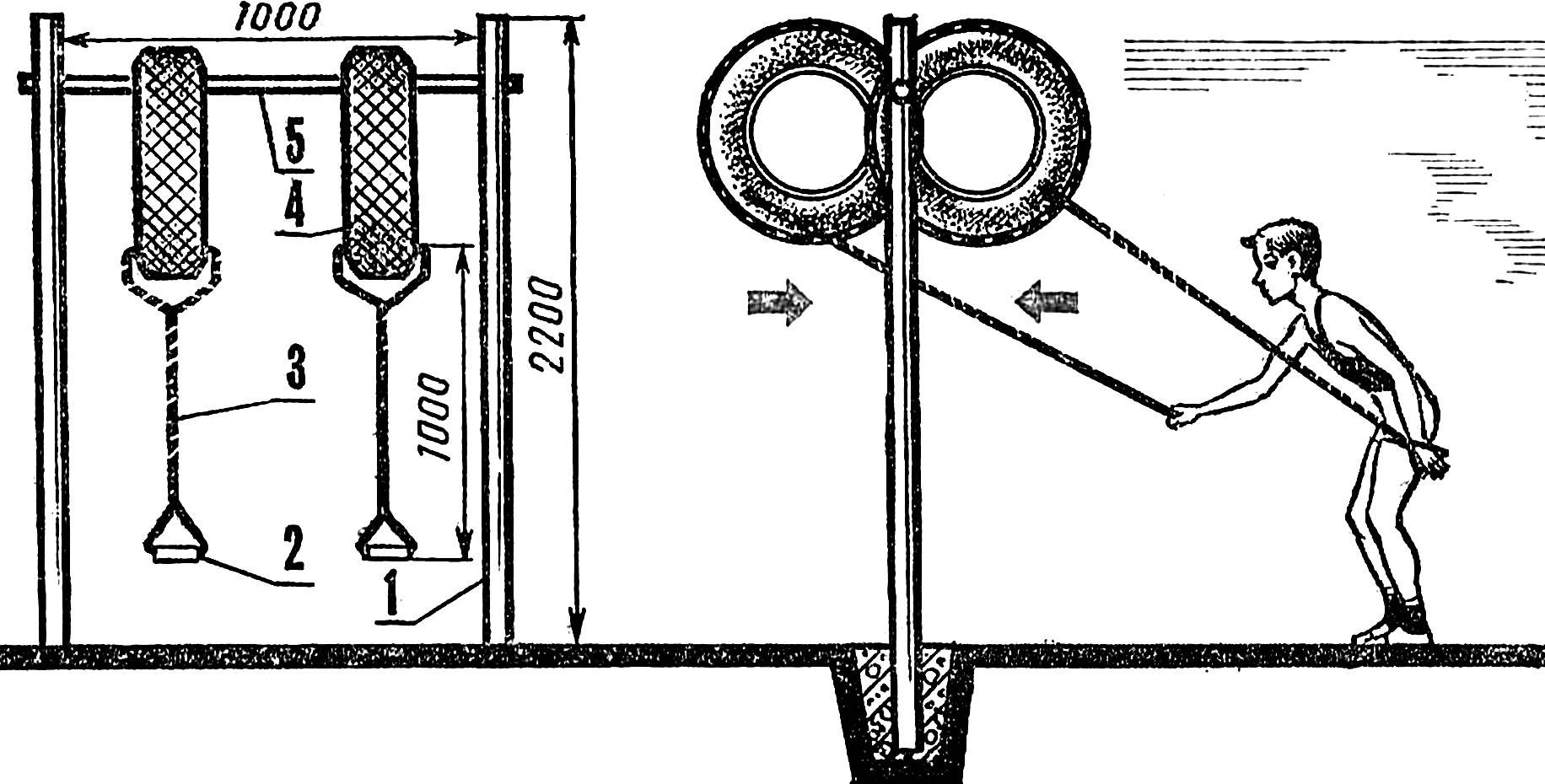 “Bells”:
1 — front, 2 — handle, 3 — wire, 4 — “bell” of tyre, 5 the crossbar.
“Sawmill”
It is similar in its constituent trainer classes which is like the movement when sawing a vertical hand saw logs into boards. It is also used rope, but proderty through a curved sleeve top-of-rack: pulling on one end, we raised another cargo of the tire of the car. To reduce friction at the bushing inside it should be lubricated with grease. 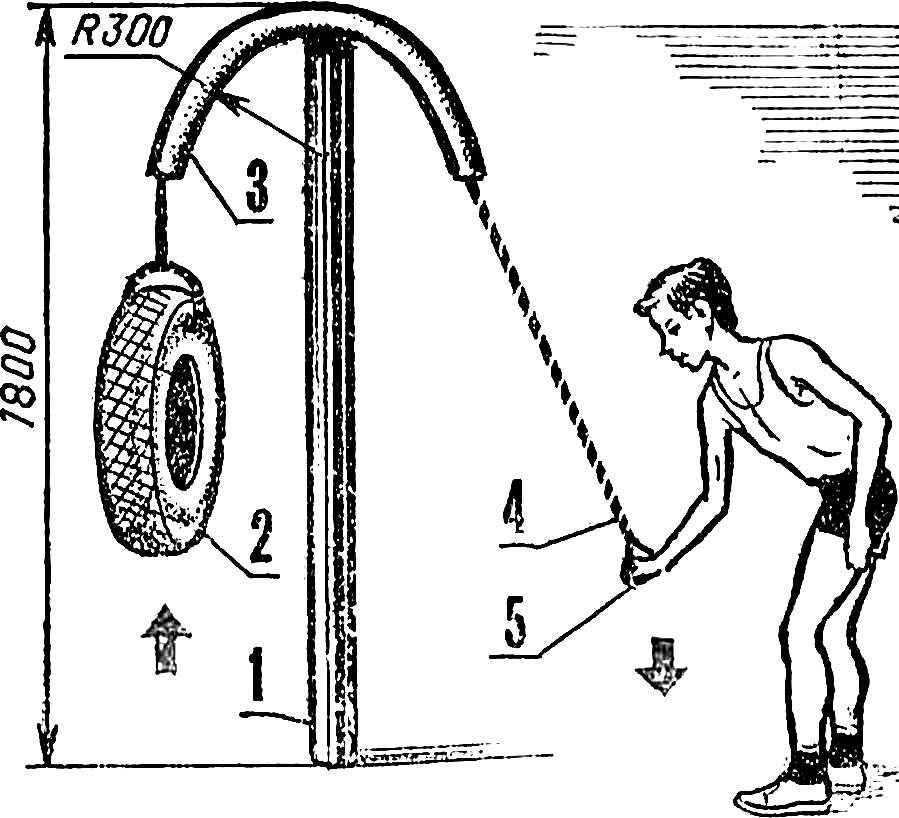 “Sawmill”:
1 — front, 2 — tire, 3 — sleeve, 4 — wire, 5 — stick.
“The hammer”
Another power trainer “the hammer,” or “Baba”, reminiscent of a manual device for driving piles. Here, too, used tyre, from passenger car to the guys from truck — for adults. Unlike the circular rod it is in this case placed in a vertical position and not on the rack, and an additional pipe sleeve, sliding on the bar, which is at the bottom of the bolt stop, do not give the Bush down to the ground. 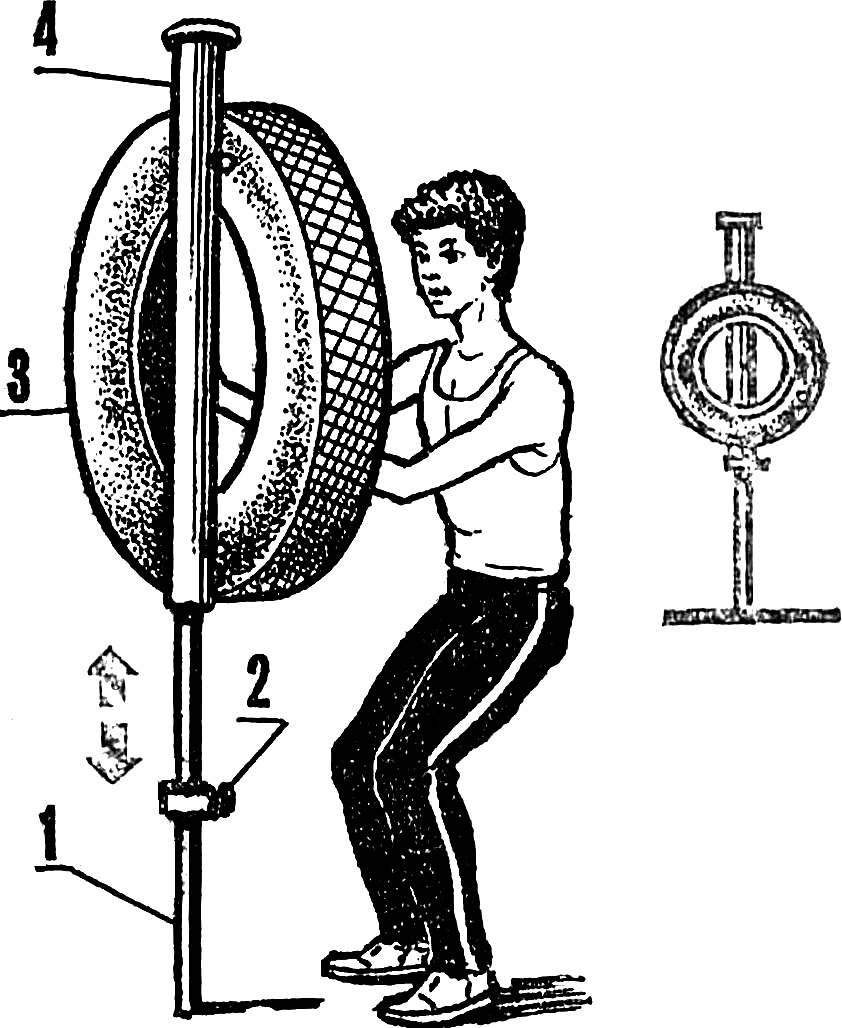 “Hammer”:
1 — front 2 — bolt-limiter, 3 — lid, 4 — Bush.
Pump
This machine is really similar to the antique fire pump for supplying water from the well. The trainee also does the handle length of the lever and leaned all my weight lifting is located on the opposite end of the standard cargo of several tires (quantity and weight may vary). The lever through the hinge in the middle part are connected with short racks of tubes or profile. 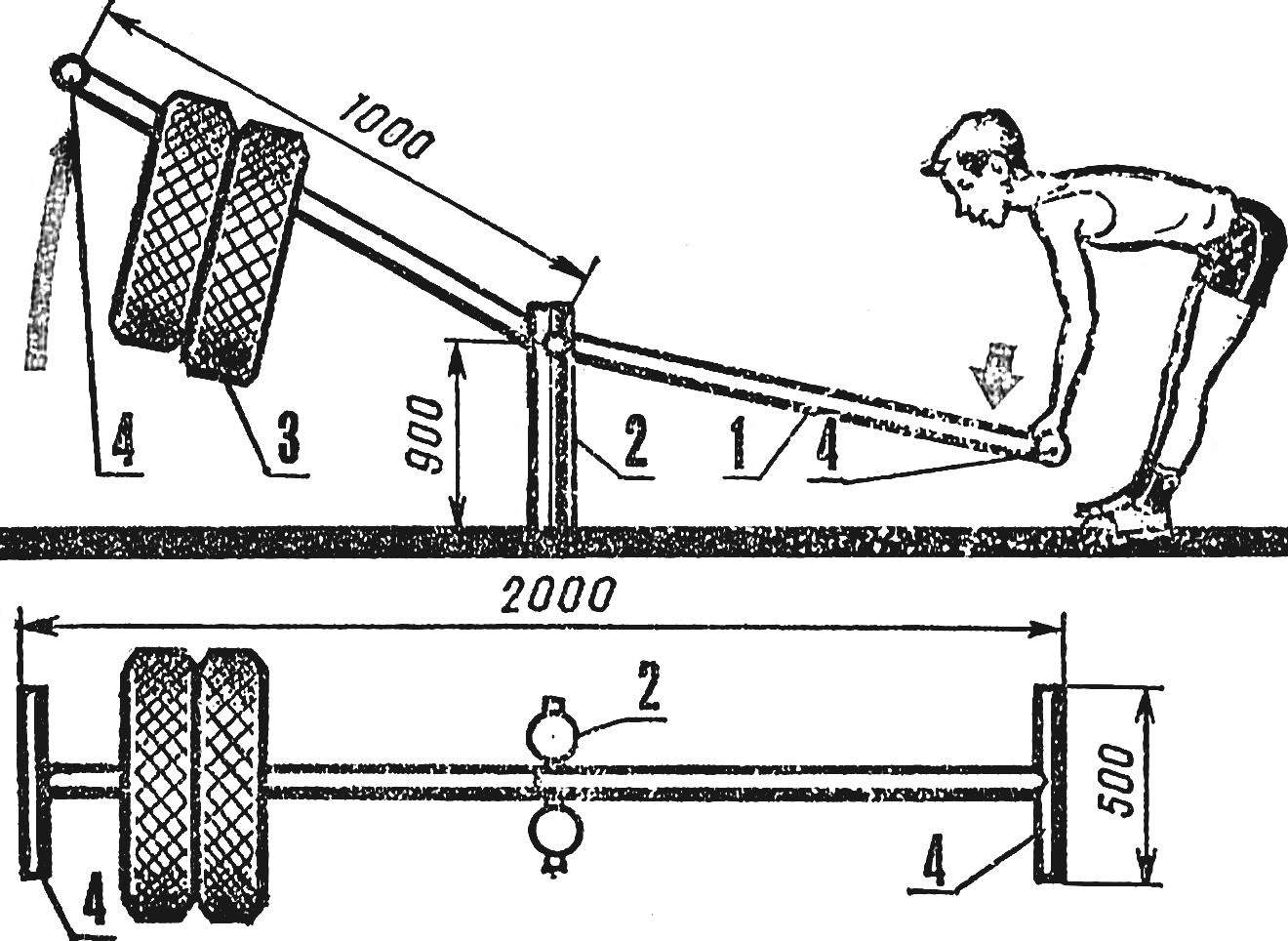 “Pump”:
1 — arm, 2 — front, 3 — load tires, 4 — tie bar Assembly (handle and stopper).
Load on the arm can change the offset of tires: moving them to the racks, reduce the load by shifting towards the end, increase.
“Grasshopper”
Modifying the previous diagram, you can get not only power, but also the gaming apparatus on which the trainee will be able to make like a grasshopper, big jumps. This trainer likes children and adults. He kind of combines two designs: the horizontal bar and swing.
The basis of a shell — shaped vertical frame pipe: the lower third it is a block of three tires, the upper of which is bonded to the tubular axis, and the bottom — cross member of the frame. Axis simulator comes in two stands of box-shaped profile, embedded in the ground. 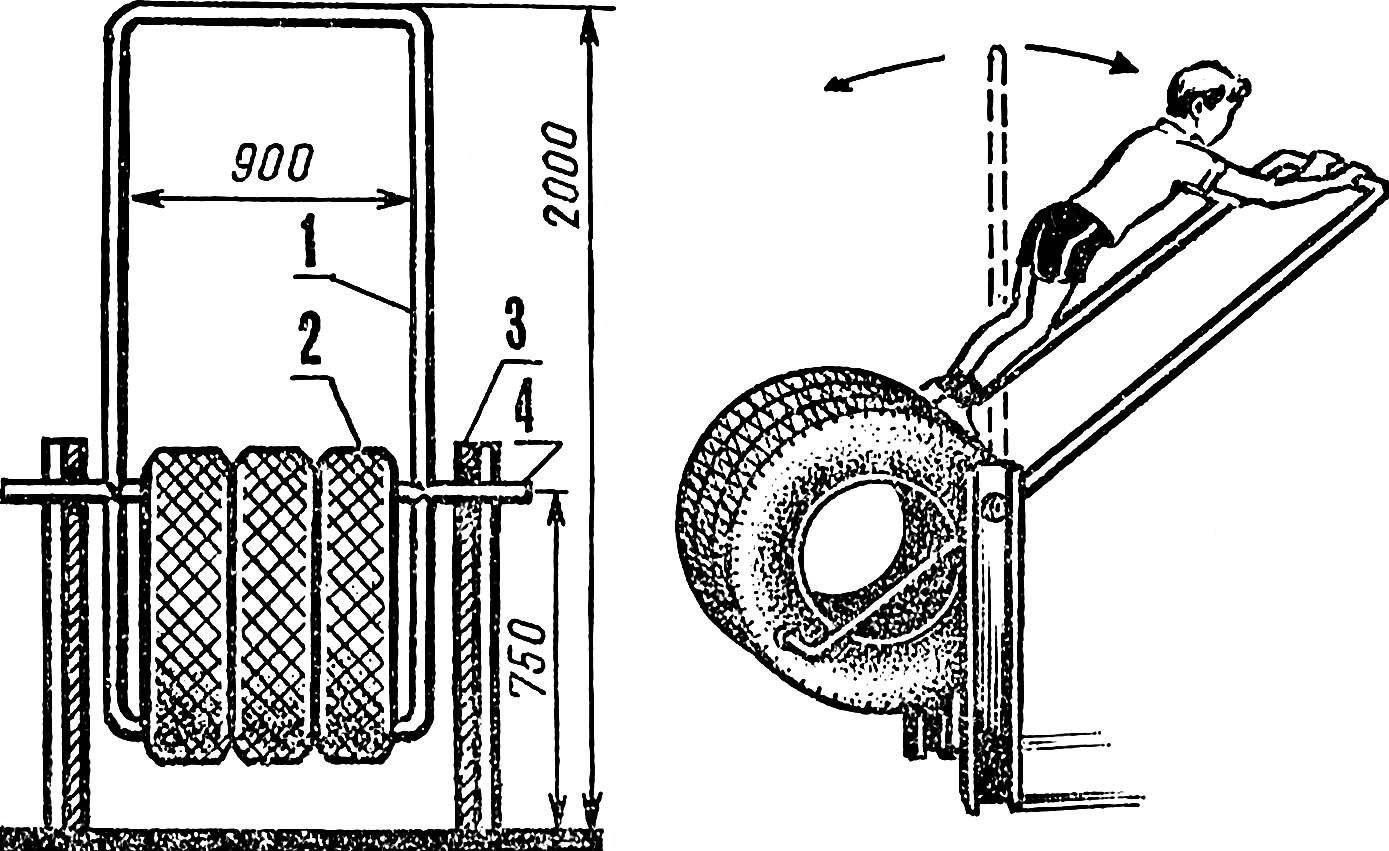 “Grasshopper”:
1 — frame, 2 — cargo-counterweight, 3 — strut, 4 — axis.
If the top rail of the frame to pull and down block tires rises and becomes a counterweight, capable of both catapult to raise training and to move to the other side and then back.
Bars-“creeper”
The desire of children to climb entirely the responsibility of the design of two rows of metal racks box-shaped profile, between which, like vines, in several tiers of tensioned cables, dressed in rubber hoses. Are formed as two closely facing the wall, slightly divergent at an angle to each other. On each layer, like flexible boards, you can do a variety of exercises. 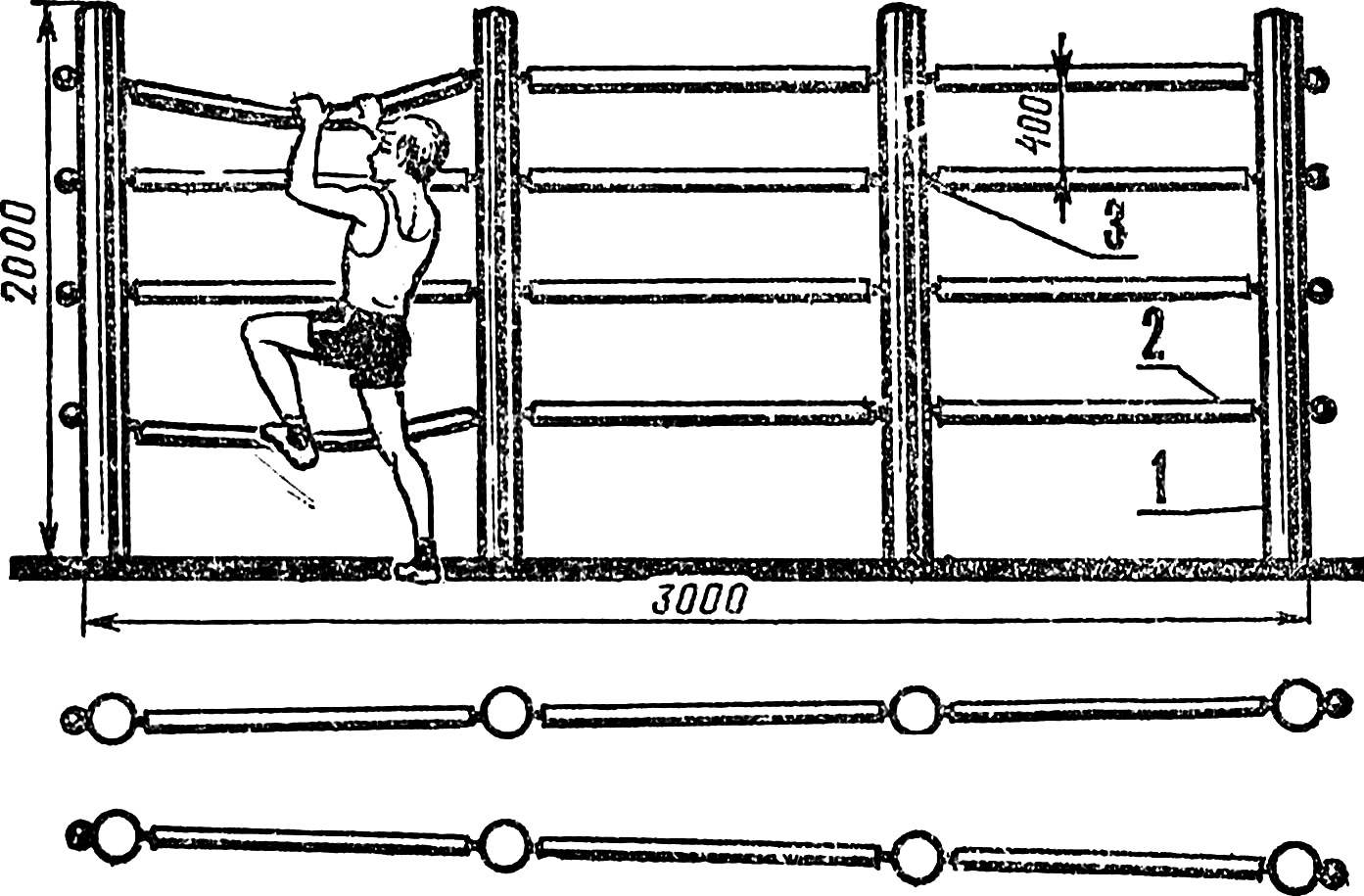