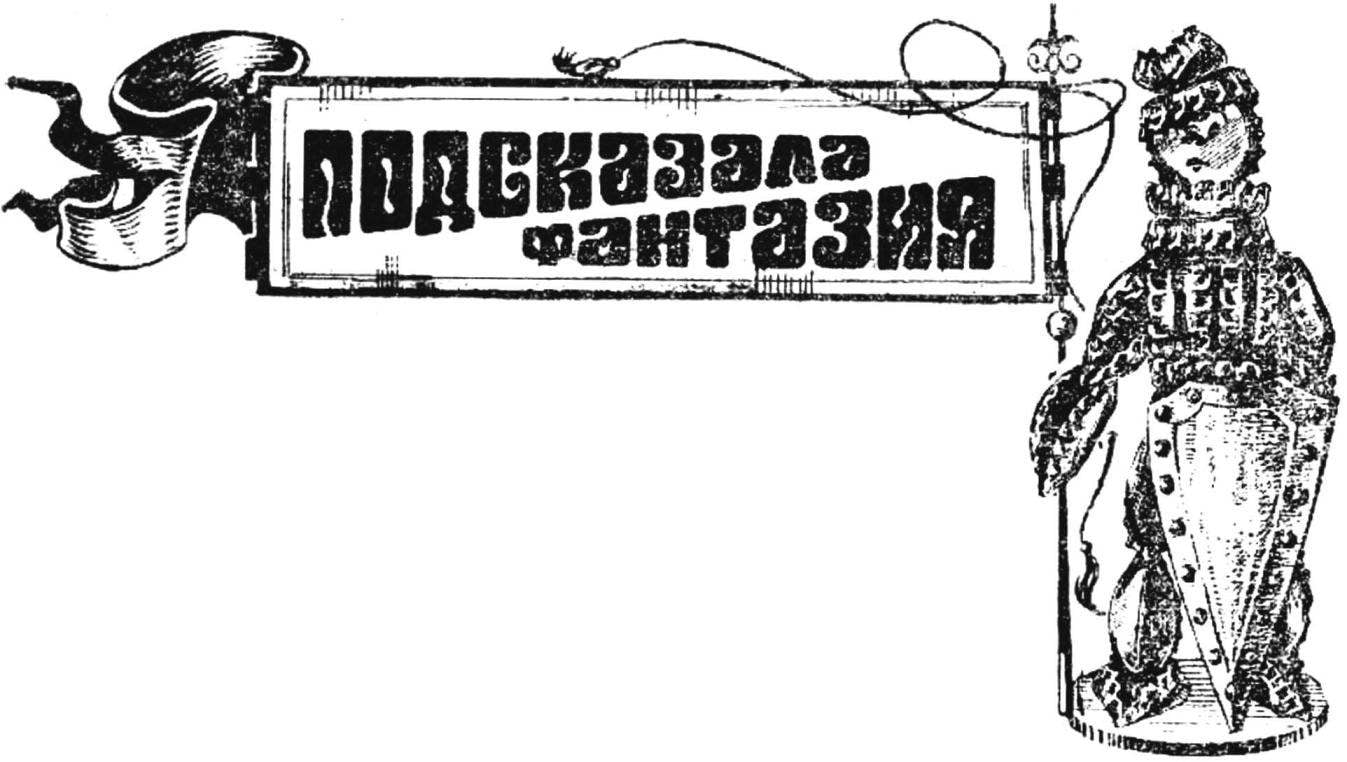 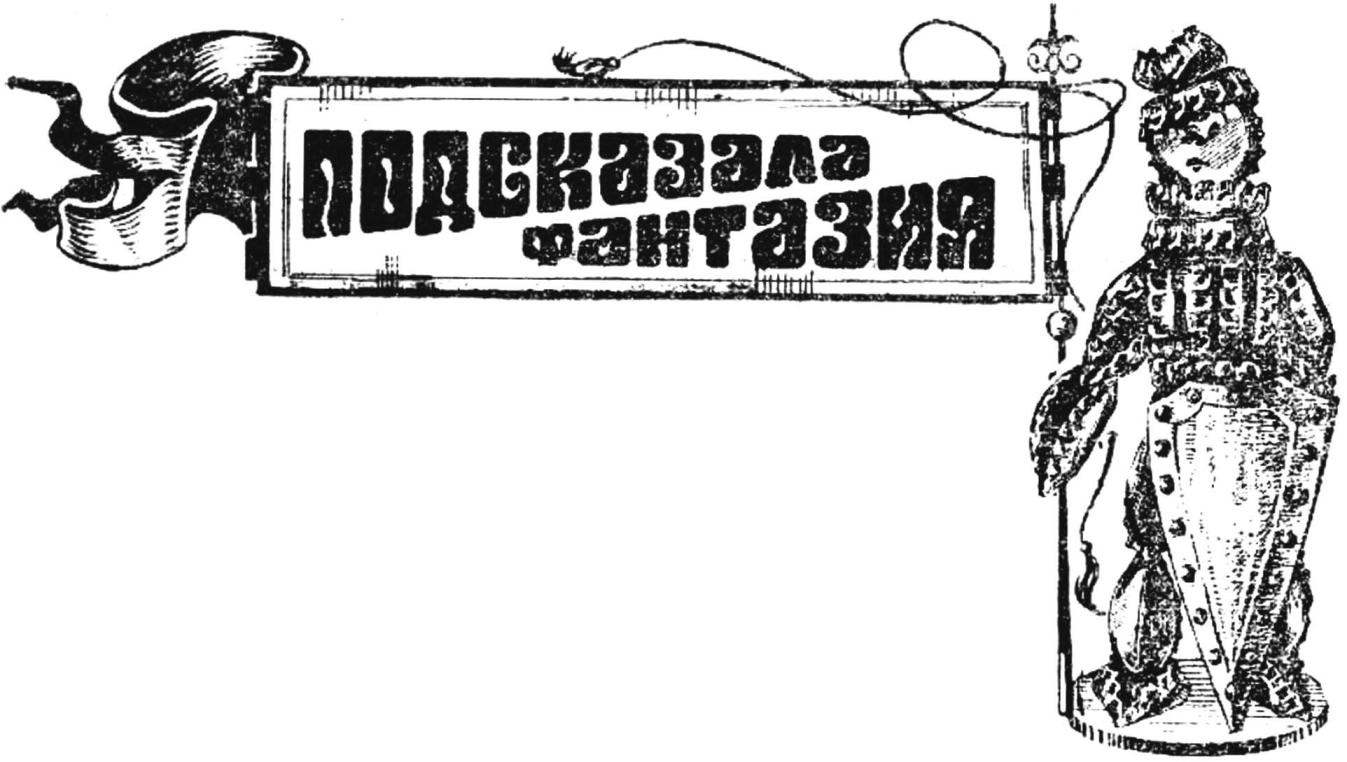 Metal caps with crimped edges from the bottles of mineral water, juices and soft drinks, cans, cuts the wires — all this “junk” material in the hands of Michael G. Pavlova, a pensioner from the Moscow region city of Lyubertsy, transformed into funny animals, of the warlike knights, and many other original Souvenirs. It turns out that to make such figures, great wisdom is not necessary. You only need to be able to solder, use simple tools and simple tools, the rest depends on the imagination of the master.

The first thing you’ll need to prepare several templates (Fig. 1) and devices for the manufacture of individual parts. Special forceps (Fig. 2) need for the application of the relief dots on the tin. One sponge of conventional pliers drill hole Ø 3 mm: it screwed the tap and fix a nut M3. Three holes in the sponge are the opposite of Ø 4 mm. In the first and second insert restrictive bandage (length 10 mm) with nut M4. In the third hole should go into the sharp end of the tap. Wooden mandrel, ka is shown in figure 3, you will need to align bottoms of metal tubes and bending of parts from sheet metal.
From caps from bottles and remove the liners and line the bottoms with the help of a mandrel. Then use the pliers part of the Flex tubes in the bottoms of the other awl to pierce holes.
Cans of canned cut with scissors for metal, unfold the side part and smooth the resulting sheet. The round base will find use as supports.
Now you can start making Souvenirs. Here to start with the most simple.
Bird. Slightly bend one cover and near its pointed ends pierce two holes of Ø 1 and Ø 4 mm. a blank for the body. Then in the centers of the other two covers — the future of paws — pierce hole Ø 1 mm. 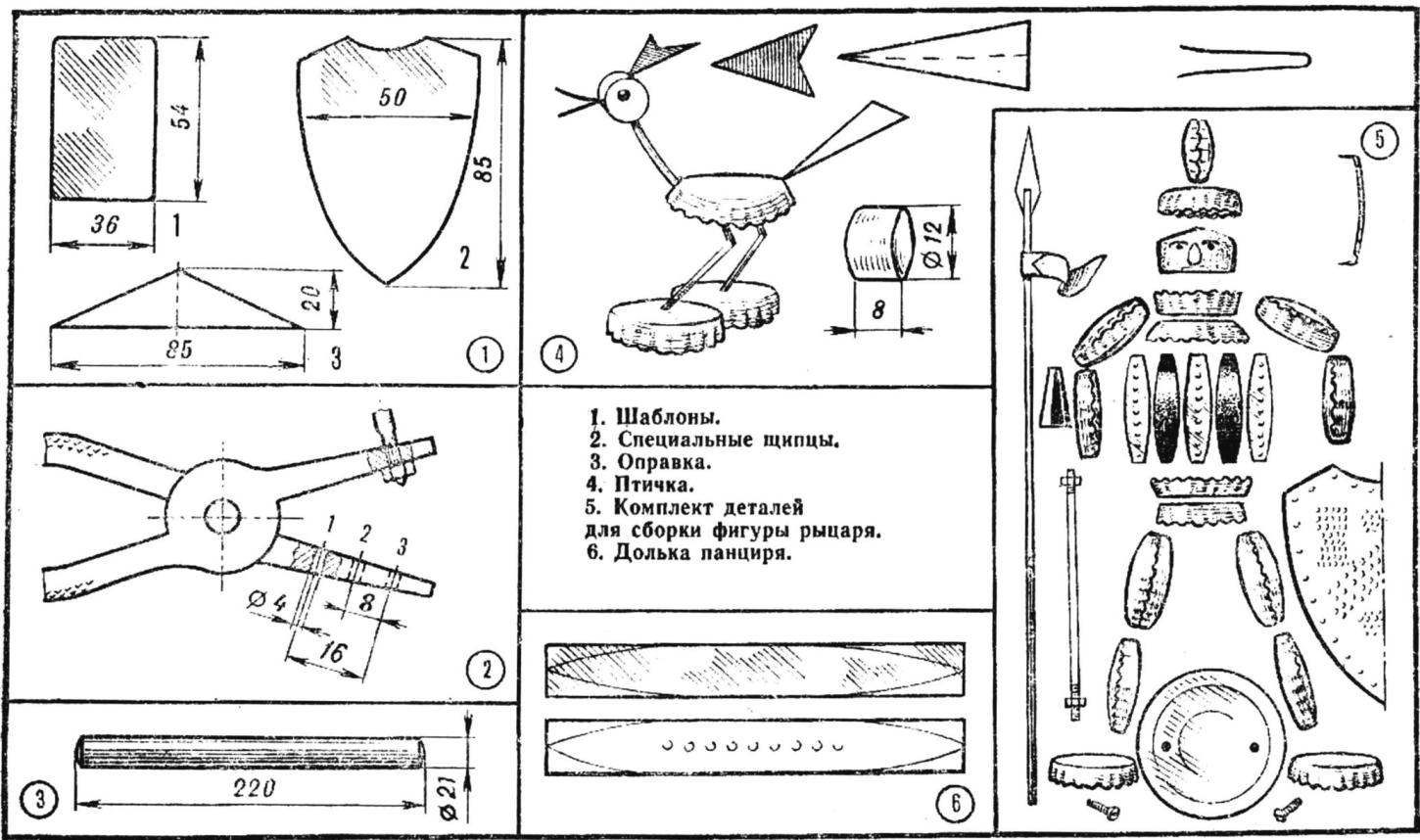 Head — cylinder Ø 12 mm and length 8 mm (Fig. 4) — manufacture from polystyrene or plexiglass. Press in a heated condition, the beak is folded in half and a piece of wire Ø 1 mm and cut from a tin comb, and the neck — cut solid wire Ø 1 mm. Approximately in the center piece of the body solder in the bend folded wire Ø 1 mm length of 80 mm, put on his two vinyl chloride tubes, insert the loose ends into the holes of “paws”, sealed — and now the figure of a bird gained his feet. The wire-the neck put on a colored vinyl chloride tube, insert the smaller hole in the trunk and solder from the inside. It remains to fit the tail. It is cut from sheet metal, bend, acute angle inserted into the hole of Ø 4 mm and fixed in the same way.
Draw the bird’s eyes, Flex the neck and legs so that the figure stood steadily on the table, your first souvenir is ready.
Rabbit with a drum. The two plugs with holes of Ø 4 mm in the center are soldered to each other and corrugated boards — get a base figure. The following two tubes bent in half, sharp ends inserted into holes on the base and attach the same way. On the opposite side to the “legs” at right angles to each other and solder the two caps: the body and the drum.
For the front legs and ears need to be folded in half four more tubes. Cover the head, besides the ears, “equip” eyes (two goals) and usami (three thin wires).
In the front legs toys inserts drumsticks — pigtails Ø 2 mm, the ends of which wear a PVC tube with a length of 2-5 mm.
Knight. Shell figures need 12 strips of tin by the size 10X55 mm. half of them first applied with a special forceps the relief point, and then all the blanks are cut, as shown in figure 6. Notched portions thus prepared slices of bend, using template 1 (each slice is applied along the longest side of the template, and the projecting edge is bent).
From sheet sheet size 50X85 mm, the mandrel is made of a cylindrical frame. It put on inostrannymi ends 12 of tubular segments. Then they draw it out with an awl, so that the casing purchased in the form of barrel.
Template 3 is used for manufacturing the “face” of the knight. Triangular blank is bent on the mandrel, wrapping up the orange paper and has between two covers. At the upper side ruffled a bit pushing — it will be the helmet.
The torso (Fig. 7) assemble using metal stud at the edges (Fig. 8). To do this, in the center of the lids pierced with a hole of Ø 4 mm. using the two M4 nuts collected details to pull together so that they are hard to rotate, and the ends of the studs bite. Top cover — crest helmet — bend pliers.
In the side cover located at the top of the carapace, with a pair of pliers, bend two diametrically opposite area, they fastened the hands of the knight.
The figure is mounted on the base (Fig. 9), made from the bottoms of the canning ban::I. it pin two holes Ø 4 mm for M4 screws with countersunk heads. With their help, attached “boots” — two curved metal tube.
Now produce legs. Cover for Shin bent in half, and for the hips only slightly compressed. Billets first solder butt along the fold line and then towards the boots and to the base of the trunk. 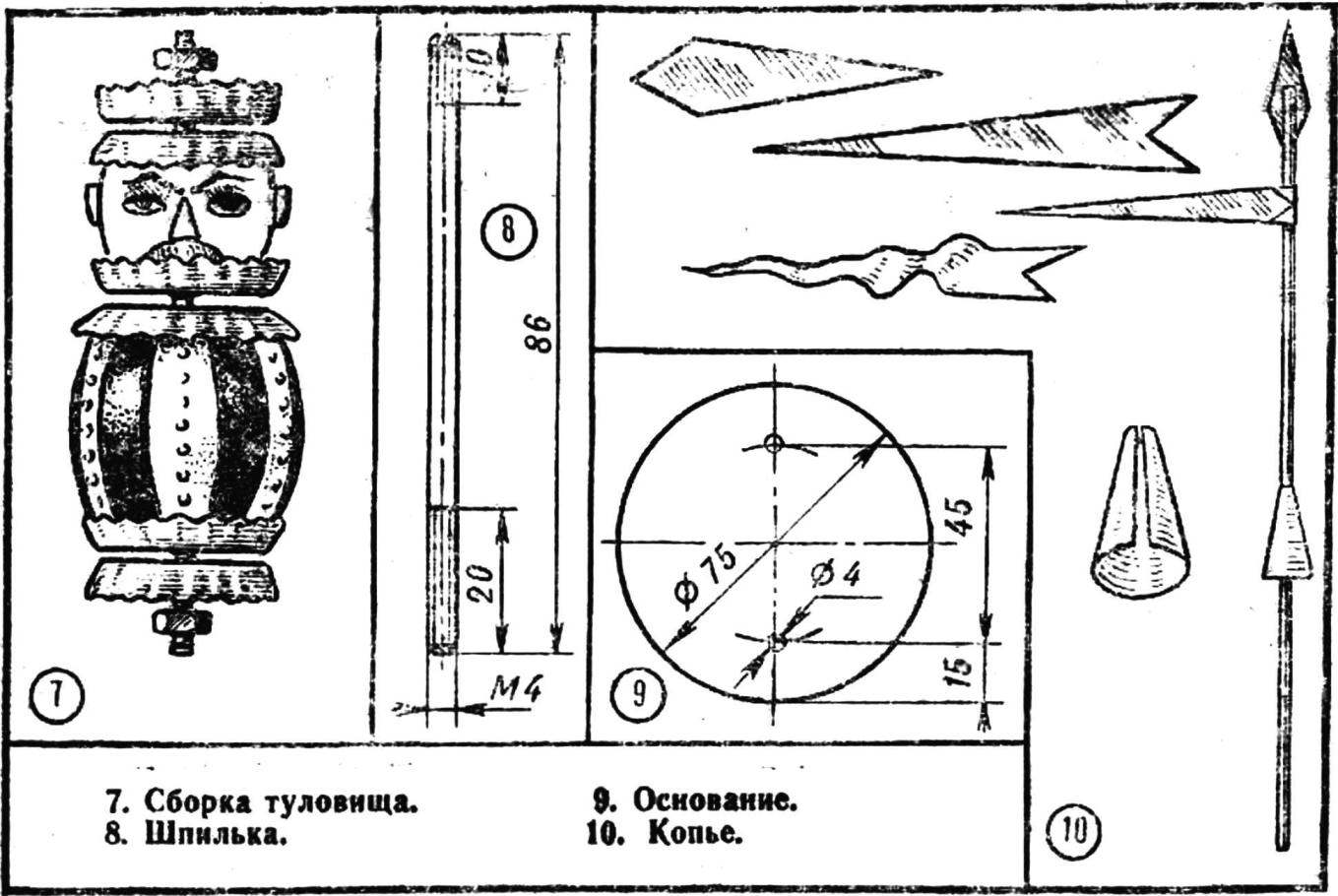 On a blank sheet colour sheet size 55X90 mm overlay template 2, the contours of its outline with an awl and it cut out the shield. Special tongs, setting the limiting screw in hole 2, apply around the perimeter of the decorative series of raised dots. In the center of the shield, place the image of the military or a sports logo.
A shield placed near the left foot of the figures. It is brazed to the corrugated side of the lower housing cover and to the left Shoe.
Then to the left shoulder of the knight and to the middle part of the upper edge of the shield solder the two bent in half the sample. The free ends of them combine with each other and bonded — so the warrior appears to the left hand.
For the right hand also need two bended tubes. But they are fixed so that the forearm is vertical. To him and to the right Shoe solder the necklace (Fig. 10).
The spear is made of wire Ø 2-2. 5 mm, length 260 mm. Tip, a check box and a protective Cup made of tin. Billet Cup using the pliers to Flex the cone.
Now, when the knight found his combat form, a simple soft pencil, draw the eyes, nose and eyebrows.