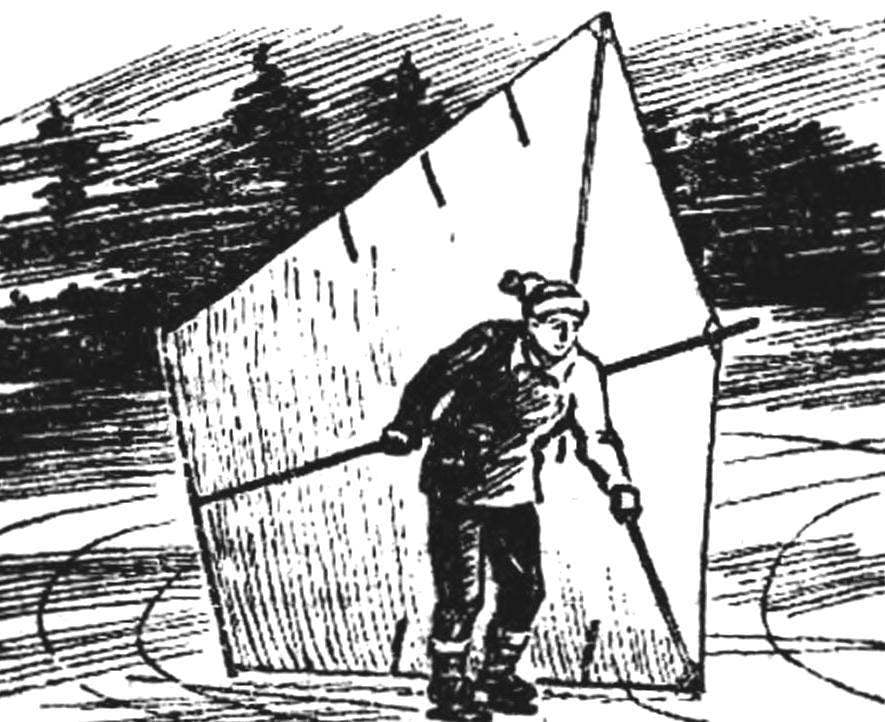 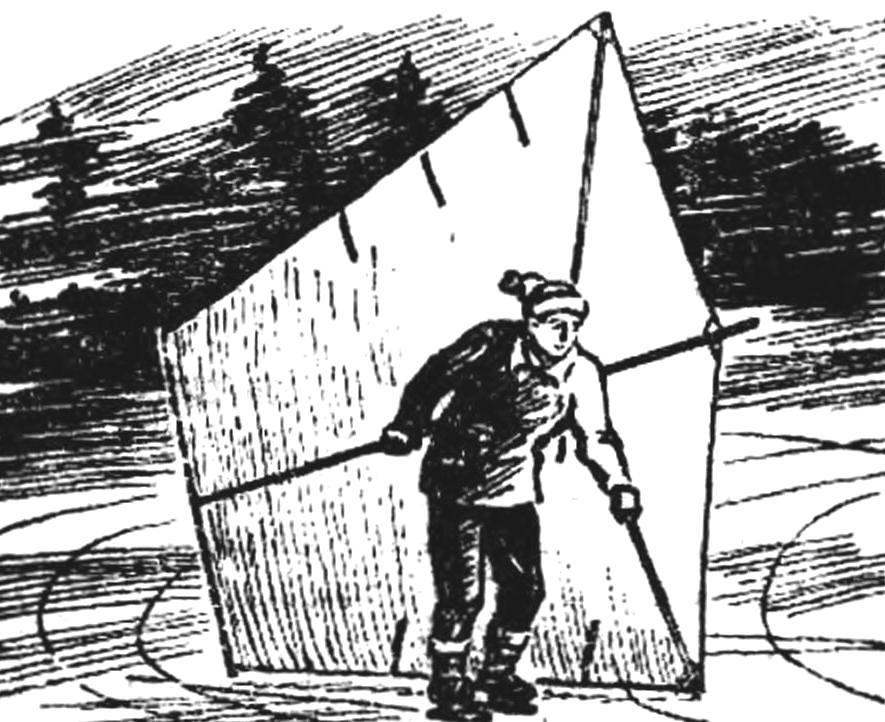 SKIING. You can go sailing on skis, not installing them on the mast (see “M-K”, 1982, № 12), but simply holding it in his hands behind him. This sail has a diamond shape, stretched on the d-pad and consists of a headsail and mainsail. Enough to their total area was 5 m2 and was maintained the approximate ratio of 1 : 3.
Cross formed of two poles with a length of 3.5 and 3 m, are in the crosshairs of contact with each other at a right angle certicom or soft cinch leather strap. Part of the grotto, adjacent to the transverse pole — let’s call it lower — prinorovilsya to him through a series of grommets or tied with attached ribbons. Corresponding to the leech of the headsail, as she expected, remains free. Around the perimeter of the sail overlaps the seam, which is sealed from Lectro thin, better nylon rope so that it was possible the corners of the cloth, reinforced botami, bind to the ends of the poles.
The sails are made of Dacron, Dacron, canvas, avizent, filtrates, etc.
If you want to make the design more compact in the transport of portable, manufacture composite poles: duralumin pipes or bamboo poles. Their connection methods — very different. In this embodiment, the flag is folded in a backpack, part of the crossbar in the case. Throwing it all behind, you can continue skiing without sails.
A few words about the technique of use of the sail. The movement must begin, standing with his back to the wind and keeping the sail stretched up hands horizontally, the jib to yourself. Then suddenly, with a jerk to throw it back, slightly bent at this point and gain speed on the course before the wind. Stand up straight, hold in widely spaced cross arms of the pole cross pressed against his back, staysail turning earth. 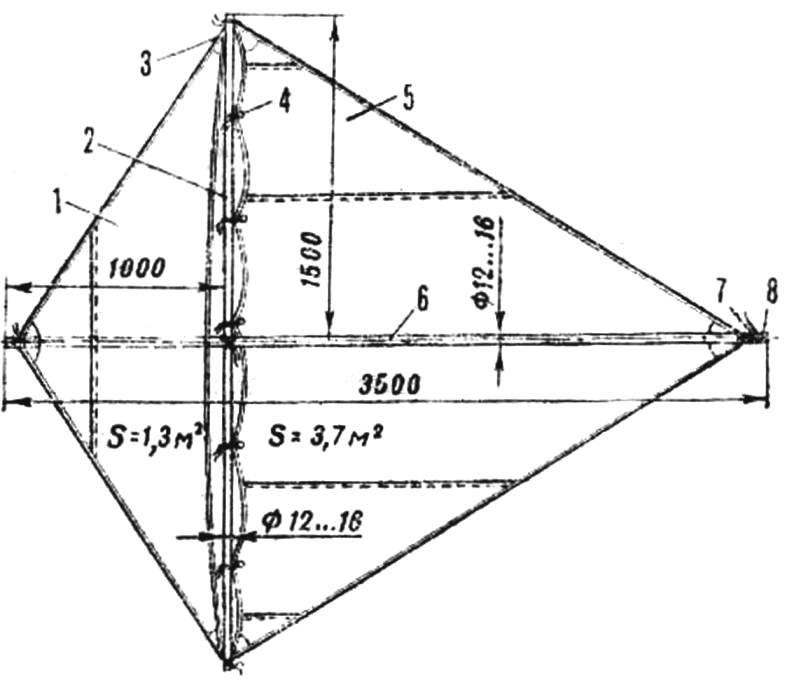 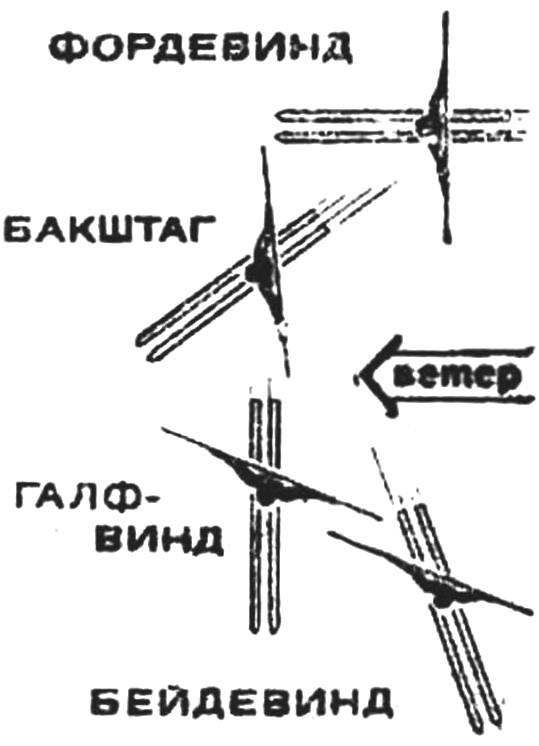 The technique of surfing.
On the backstay skier carries some weight on the “windward” leg, unrolling the jib to the wind. On the galfvind leg even more bent at the knee, sail leans stronger one arm is trailing. the pole. During the transition to wind this pole is placed almost horizontally, building strongly “handed down” to the wind.
When you stop, leaning forward slightly, throw sail through right into the snow and brake “plow”. Turns make a large arc, slowly crossing.
When the wind 4-8 m/s the speed of the skier sailing can reach 50 km/h. Moreover, it is often possible to tow one or even two people on a flat field or snow-covered ice.
SKATING
With a sail in hand, you can ride not only on skis, but on skates. Even more successful: high speeds, high maneuverability.
For a long time the design of the “mover” has remained almost without change — the same as used for skiing. It is only in recent years in Sweden tried to make a pentagonal and sail to make some modifications to his frame became more convenient “to carry the mover” to manipulate them. By the way, the Swedes of today are the legislators of skating with a sail, n in Scandinavia, it has already gained recognition as a new sport established the national Federation conducting the national Championships and international competitions.
Square sails have remained the same — about 5 m2, but the panel was solid — no separation on the mainsail and jib. The frame is made of duralumin tubes of small diameter, exactly in the middle is the Central pole, perpendicular to it along the smaller base of the lower. Two intersecting at a small angle of the pipe-struts — upper bonded certicom or strap, and the end of each of them is associated with another cable. Thus, the cloth is tightly “sitting” on the frame only at the bottom, only further stuffed in the corners and along the mid — pole: depending on tension is formed and the amount of “belly”, however, they aspire to make it smaller. 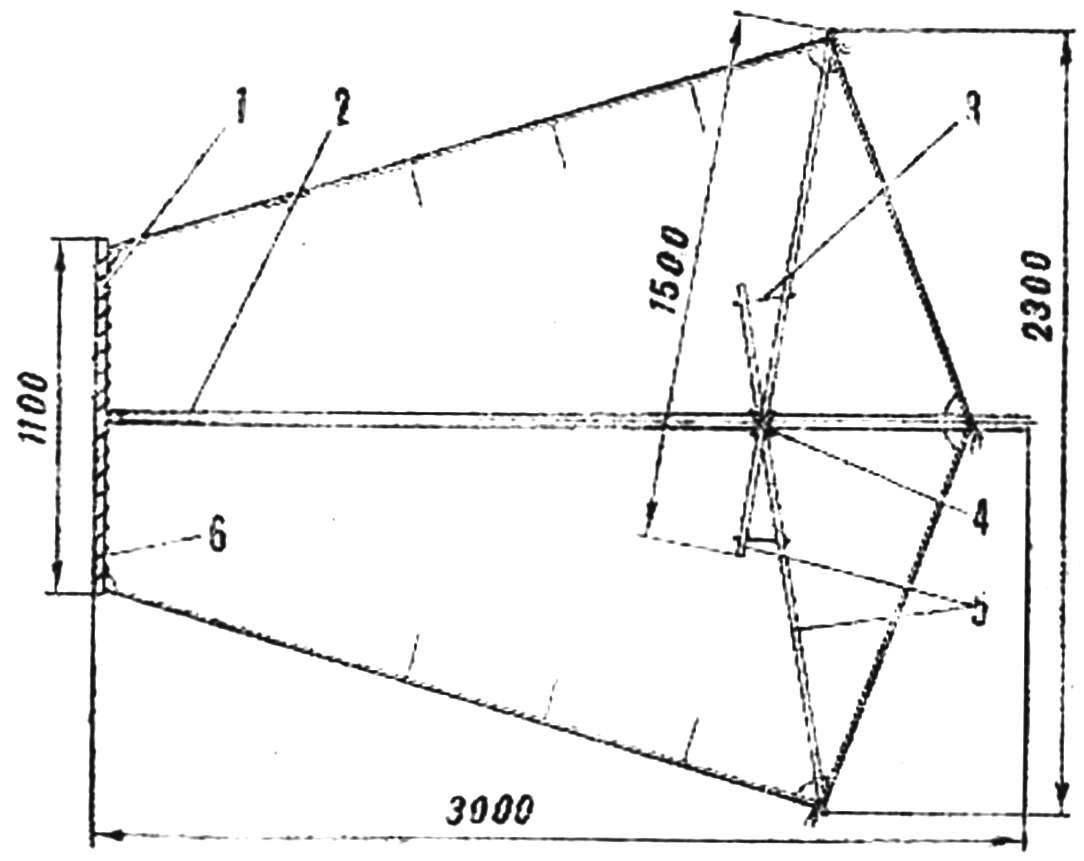 Methods of management of the sail:
1 — at the start, 2 when overclocking. 3 — wind, 4 — right side, 5 left side, 6 —a change of tack, 7 — stop
At the movement the athlete is taken with one hand on a Central pole, and the other one from the top. Being on the leeward side, it keeps the body somewhat obliquely — “lies in the sails”, balancing the wind pressure. At this is often only one skate: a decrease in the area of slip gives a speed boost. When Valiance when the wind becomes more favorable, and the sail gradually transition back. Set to the wind, take him to the front, reducing the “angle of attack”.
Acceleration start, holding the cloth for both the top tube and lifting it horizontally above her head, vigorously pushing skating, gaining speed. Simultaneously gradually lowered the sail by putting it in the correct position for the direction of the wind. Act the same way when you tack, and especially when you stop, helping to slow down further and skates. The latter, however, is not quite normal: the length about the same as Jogging, but the height is two to three times higher. However, it is possible to enjoy hockey and to reach them speeds in a few tens of kilometers per hour.
V. TALANOV