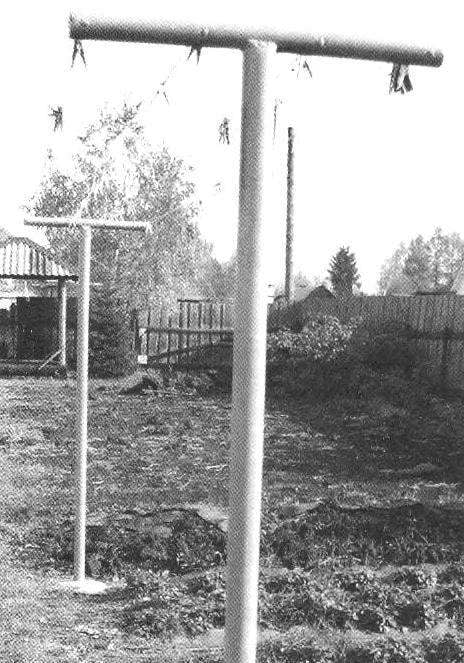 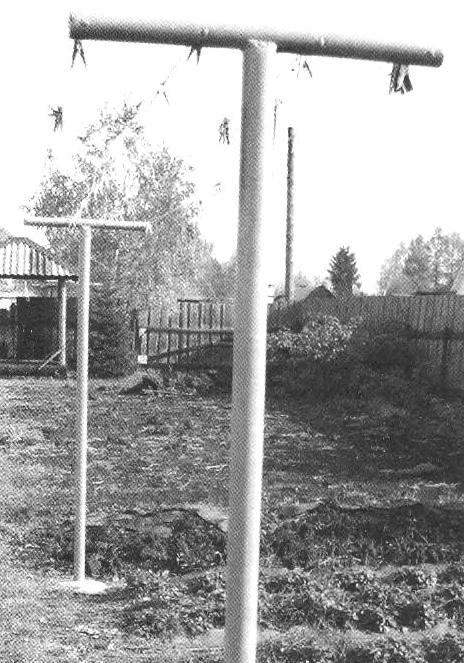 Any owner confirms that the washing out, dried on the street, gets the smell of freshness, not an example of this, when moisture from the Laundry evaporated in a special apparatus (devices) or simply indoors. Many times this smell is enhanced by weathering of underwear in the cold, and especially when freezing.
Wife to provide the conditions for smooth and convenient drying of washed clothes in the fresh air, on the plot he built is not so significant, but the desired construction. These can often be seen and among the urban high-rise buildings, and rural farmsteads. It represents a pair of T-shaped uprights, spaced from each other by 4 — 5 m, with strained between them believeme cords. These dryers differ from one another except that the number of hooks on the traverse. Due to the fact that the thickness of the pipes traverse less than the uprights, the upper ends of the latter to eliminate looseness in the joint is slightly tapered.
Design my tumble dryer too, almost traditional, at least in appearance. The difference is in the underground part of each leg, specifically their foundations.
It would be possible to ensure the stability of stands due to the weight of the Foundation, dug (or drilled) holes deeper, and “to drink” in there concrete. But this is not the master’s approach, especially not engineering.
You can install the rack tilted from each other. But this is not their installation, I have never seen, and he did not dare to do so because they would like have collapsed. I went the other way. For the device of the foundations excavated at the place of installation stand shallow rectangular pit is inclined at 45°to the bottom. In the middle of it scored in-ground rack so that the traverse was at the height of about 2 m above the ground. To ensure sustainability, they have made a Foundation in the form of an inclined concrete slab. 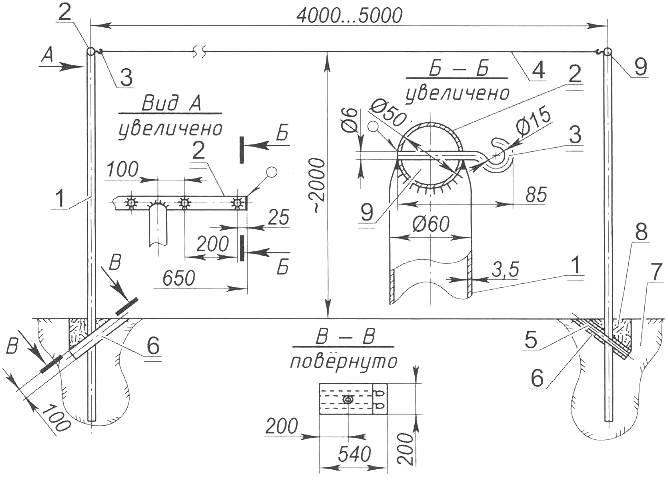 Vegetable dryer (side view):
1 — front (steel pipe Ø60, 2); 2—yoke (steel pipe Ø50, 2); 3 — hook (steel wire Ø6, 8 items); 4—linen thread (4x); 5 — reinforcing bar (pipe 14”, 4 piece); 6 — base plate (iron, concrete, 2); 7—native soil; 8 — backfill; 9—plug (steel sheet s3,4 PCs.)
To enhance communication .between the posts and plates and strengthening plates themselves to racks welded a pair of reinforcing bars — cuts of old half-inch water pipes. Back in the pits backfilled soil was compacted by hand tamper.
At the end stands should cover at least the primer, a better — more oil paint for exterior use. After it dries between the uprights on the hooks pull a linen thread. It should be noted that cord should use a non-stick coating to the hanging of underwear could easily wipe settled on his street dust.
I must say that the dryer is used for various other household needs.
A. MATVEICHUK, Zavodoukovsk, Tyumen region.